The Yays and Nays: Our Week 13 Fantasy Football Rankings, Projections and Top Plays | The Analyst 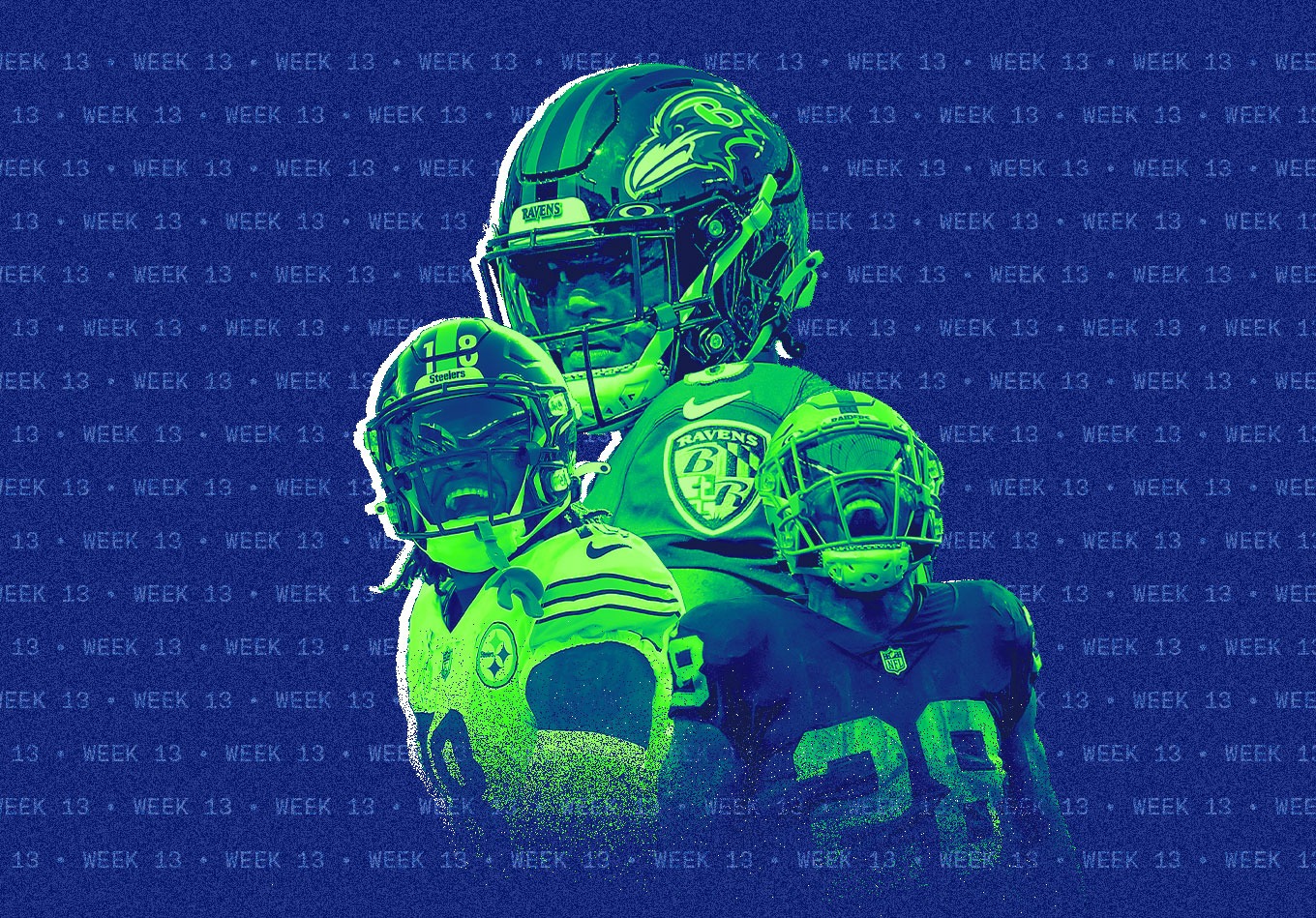 On the back of a whopping 48.3-point performance, Jacobs is now RB2 on the season – just a tad behind Austin Ekeler.

But the part that our model, and most of the industry, missed was that Jacobs is simply one of the best running backs in the NFL. Before the season, our model was concerned about Jacobs’ volume with a new coaching staff coming in. Volume hasn’t been an issue though, because Jacobs has been so productive the Raiders have no choice but to keep giving him the ball.

To boot, Jacobs is fourth among running backs with at least 100 carries in both yards per carry (5.37, just behind Travis Etienne) and average yards after contact.

Jacobs has five games with at least five receptions this season. You add that to having the third-most carries in the NFL, and you’ve got a player whose average draft position was well outside of the first three rounds carrying a lot of teams to the playoffs.

Not only has our model completely come around on him – he was our highest projected running back all the way back in Week 7 – it’s gone far beyond that. Playing the Los Angeles Chargers this week, Jacobs is our highest-projected player. Forget position.

It wasn’t Josh Allen, who played last night in the Buffalo Bills’ win over the New England Patriots. It’s not any other quarterback. Jacobs is our top player for the week. And so, it’s only right that we lead off this week with an apology and a hat tip to a player who has made his fantasy managers feel like they’ve hit the jackpot.

As always, let’s jump around and evaluate some Week 13 projections gathered from some of the top data-driven projections available using several of our AI-powered models. Refer back to our fantasy football rankings for any questionable waiver wire or lineup decisions.

Note: We’re comparing our rankings to the expert consensus rankings (ECR) from Fantasy Pros. Our rankings here may not match those on our rankings page, which is updated throughout the week. (We pulled these numbers from Friday.) Once again, we are using PPR unless noted otherwise.

It’s been an odd season for the Ravens. They’ve held a double-digit lead in three of their four losses – including two in the fourth quarter – and that doesn’t even include last week’s debacle in which they were up nine points with less than six minutes remaining. And yet, they still lead the AFC North.

Whatever funkiness is happening in their real-life results has not impacted Lamar from a fantasy perspective. He has been excellent, entering the home stretch as QB5. Why? Because in addition to having 17 touchdown passes and an excellent connection with tight end Mark Andrews, Lamar is once again destroying opponents with his legs. He ranks second among all quarterbacks in total rushing yards, and first in percentage of rushes that go for 10 or more yards.

This week, our model is expecting more of the same. Even though the Denver Broncos have been incredibly good defensively, Jackson’s projected rushing line is 11 carries for 86.9 yards. Jackson’s rushing average is so high because his carries average about four additional yards after a first interaction with a defender, which happens roughly four yards down the field. Or, put simply, defenses have a hard time catching him and then tackling him. Lamar is our QB1 this week.

The model clearly thinks both teams will have success running the ball, because Murray is also a Yay for this week. Now, the difference is, the Baltimore offense is good (sixth in points scored), and the Denver offense is borderline historically bad (last in points scored by 21 points!).

And yet, despite the Broncos’ pure ineptitude when it comes to getting the ball into the end zone, that has not really impacted Murray. Denver has six rushing touchdowns this season and Murray has three of them, despite not even suiting up for the team until Week 6. He’s also averaging 13 carries and two receptions per game, so volume isn’t an issue, especially since the team said “sayonara” to his only real competition for touches (Melvin Gordon).

All told, starting any Bronco doesn’t inspire much confidence. But this week, fantasy managers should be confident in Murray. He’s an RB2 this week.

Tyreek Hill, for example, only has four touchdowns for the Miami Dolphins all season. As such, Lockett has one of the highest touchdown projections among wide receivers this week. Combined with his season-long averages of over five catches and 64.4 receiving yards per game, Lockett has both a solid floor and a nice ceiling.

In this matchup against a struggling Los Angeles Rams team that just allowed 320 passing yards to Patrick Mahomes and the Kansas City Chiefs, the Seattle Seahawks should be able to find success through the air. Lockett is a big part of that and our model is optimistic about his chances of producing a top-10 performance.

If Lockett has been extremely consistent for his fantasy managers in part because of his touchdown ability, then Johnson would be exactly the opposite. There are 58 wide receivers with at least 50 targets this season. And 57 of them have scored a touchdown.

However, it’s more than that. Because Johnson has 94 targets, which is eighth among all receivers. Eighth! But among those 58 receivers with 50 targets, not only is Johnson the only one without a touchdown, but he also has the lowest average yards per reception (9.0). In short, Johnson has been extremely disappointing and fantasy managers with him are nodding their heads in agreement.

But do you know what they should consider doing this week? Starting him. We’ve mentioned in this space before that playing the Atlanta Falcons is like an early Christmas gift and that’s what the Pittsburgh Steelers get this week. If it seems like George Pickens has overtaken Johnson in the pecking order of that Kenny Pickett-led passing offense, he hasn’t. Johnson is read almost twice as much as Pickens and that includes down at the goal line, where Johnson just hasn’t converted any of his chances into a TD. This is the week things change. Johnson is inside our model’s top 20.

Hello Mike White! If only you were here a few weeks ago when we selected Garrett Wilson as a Yay. Well, we can’t reverse time, but what the model can do is not fall into all the hype and remind us that this is a backup quarterback who before last week had five touchdown passes and eight interceptions in his career.

This doesn’t mean that White wasn’t brilliant against the Justin Fields-less Chicago Bears last week, because he absolutely was. It’s just that he has more games with two or more interceptions than games with none. As such, White has the second-highest interception projection of any quarterback this week.

In this matchup against the 9-2 Minnesota Vikings, White is best left on your benches.

All this man does is score touchdowns for the Detroit Lions, including three of them against Daniel Jones’ New York Giants two weeks ago. That’s why it’s going to be odd when we warn you that Williams is the epitome of “touchdown-dependent.”

So essentially, whether you play Williams or not needs to come down to an examination of your chances against this week. If you think you can skate by with five points from Williams and still win, then play him, because his final stat line against the Jacksonville Jaguars could easily read 15 carries for 50 yards. It could also read 15 carries for 50 yards and two touchdowns.

Yes, Jefferson is a Nay this week. But if you have him, start him and don’t think twice about it.

He has been outstanding as a cover corner all season and is one of the critical players on a defense that has only allowed 10 passing touchdowns in 11 games. Jefferson’s yardage and touchdown percentages are among his lowest of the season. Jefferson may still put up crazy numbers as the Vikings try to chase down the Philadelphia Eagles, but it would be more of a surprise if he was able to do it against this defense.

There seems to be a theme amongst the wide receivers this week. Because for as brilliant as Olave has been this season, the one area where he hasn’t been so great is in the red zone.

He is utilized less the closer the New Orleans Saints get to paydirt, which isn’t a trend you want in your wide receivers. Olave, because of this trend in usage, has the lowest touchdown projection among our model’s top 45 wide receivers this week.

Yes, you have to go down to WR46 in our model’s rankings to find a player less likely to score a touchdown. Olave, therefore, is a Flex play who is more likely to have a good outing because of catches and yards than accidentally falling into the end zone against the Tampa Bay Buccaneers.