Data Darlings: Who Are the NFL's All-Pro Players of the First Half? | The Analyst 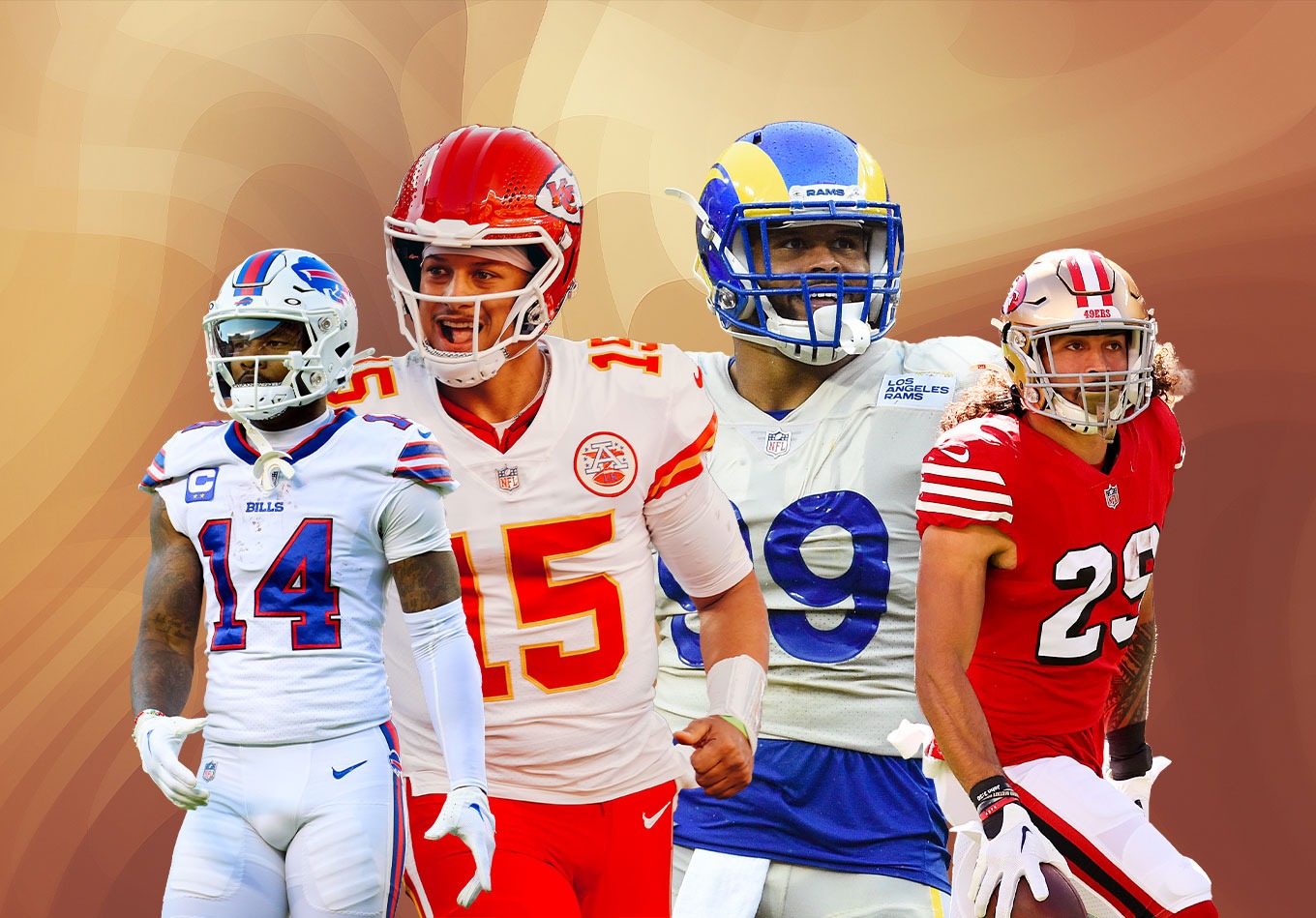 Data Darlings: Who Are the NFL’s All-Pro Players of the First Half?

The midpoint of the NFL season is tougher to discern following the move to a 17-game campaign, but with Week 10 off and running, it’s fair to say we are into the second half.

It’s in these final nine weeks when the games will become increasingly important and the onus will be on the game’s best to deliver and make sure their respective teams are in position to reach the postseason.

The performances in this half of the campaign will have a significant influence on the end-of-year awards and on the identity of players named to the All-Pro team.

But which players are most deserving of the latter honor following the opening half of the season?

We dug deep into the advanced metrics to help fill out our All-Pro team at the midway point of the year.

Mahomes is second in the NFL in EVE (Efficiency Versus Expected) in expected passing situations among quarterbacks, trailing only Josh Allen of the Buffalo Bills. However, Mahomes has produced 36 completions of at least 20 yards compared to 30 for Allen. He has also been the more accurate quarterback, posting a well-thrown percentage of 82.7 compared to 82.2 for Allen.

Hill is third in big-play rate among wide receivers with at least 50 targets. His rate of 39.5% trails only Amari Cooper (40.4) of the Cleveland Browns and teammate Jaylen Waddle (39.7). Hill also leads all qualifying wideouts with 5.0 burn yards per route and is on pace to finish with over 2,000 receiving yards.

Diggs leads the NFL in open percentage against man coverage, winning 74.4% of his matchups and reaffirming his status as one of the NFL’s elite route runners.

When he has been healthy, no tight end has done a better job of creating separation than Andrews, who leads all players at his position (minimum 25 targets) in burn rate (78.1%), big play rate (39%) and burn yards per route (3.7).

The Texans’ struggles have nothing to do with Tunsil, who leads all linemen with a stunt-adjusted pass block win rate of 94.6% and all left tackles with a pressure rate allowed of 1.5%.

With the Eagles’ Jason Kelce succession plan in place at center, Dickerson can focus on playing guard, which he is doing outstandingly. He leads all left guards with a pressure rate of 3.3% and his stunt-adjusted pass block win rate of 88.7% is second among all guards.

An outstanding run-blocking guard with a win rate of 80.0% in that area of the game, Teller’s pass-block win rate of 90.7% trails just Tunsil among all offensive linemen.

The problems on the Bucs’ offensive line are on the interior, not at tackle, where Wirfs has been exemplary. Wirfs has allowed three pressures in 277 pass-blocking snaps and is third in adjusted win rate (90.6%) among linemen behind Tunsil and Teller.

Garrett’s pressure rate of 29.7% is tied for the best among all edge rushers while his pass-rush win rate is a phenomenal 68.3%. Winning 48 of his 70 rushes, no edge defender can match him this season.

The Rams’ hopes of retaining the Lombardi Trophy look to be hanging by a thread, but Donald is still Donald and once again playing at a ridiculously high level. Only two players (Derrick Brown and D.J. Jones) have a higher run disruption rate among defensive tackles than Donald (40.5%) while Quinnen Williams is the sole interior defensive lineman with a better pressure rate than his 24.2%. No defender, however, can match Donald’s remarkable pass-rush win rate of 73.7%.

Dexter Lawrence of the New York Giants has a better pass-rush win rate (72.8%) than Williams (70.6%), but Williams has been the slightly superior all-around defender, winning his run defense matchup 62.5% of the time (adjusted for double-teams) compared to 54.7% for Lawrence.

Miller has been worth the extremely lofty price of admission for the Bills so far this season, posting a pass-block win rate of 57.3% and winning 63.0% of his run-defense matchups.

You may be screaming ‘where is Micah Parsons?!’ about the absence of the man seen as the NFL Defensive Player of the Year frontrunner. Parsons is fourth in pressure rate among edge rushers (28.3%), but 16 of his pressures have been unblocked, illustrating a role in the Dallas defense in which he often takes advantage of stunts as the looper.

Athleticism and quickness create a tougher situation for the linemen who are being gamed, but it also relies on the penetrator half of the stunt to pick two defenders. In other words, he’s creating pressure because a different lineman is blowing a hole through the protection, giving Parsons a free rush on the QB.

In terms of traditional pass rushing, Parsons’ impact has not quite been significant enough to make the cut.

Warner remains the gold standard for coverage linebackers, allowing a combined open percentage across man and zone of just 15.5 – second only to Pittsburgh Steelers safety Minkah Fitzpatrick (14.0%). Warner has also displayed improvement as a blitzer in 2022, his pressure rate of 43.8% is second among inside linebackers with at least 20 pass rushes.

At 33, Davis continues to demonstrate impressive longevity. His combined open percentage allowed of 17.6 trails only Warner among linebackers with at least 100 total plays, while he has also won 23.2% of his run defense opportunities, well above the average of 17.7 for the position.

While the Chargers’ run defense has continually struggled, Los Angeles’ play in the defensive backfield has been impressive, with Callahan a clear standout. He has lost just six of his 74 coverage matchups across man and zone for a combined open percentage of 17.6 that is the best among corners with at least 50 matchups.

In his second year in the NFL, Surtain already has an extremely strong claim for being considered the best corner in the league. He is third in combined open percentage (21.0) and his burn rate of 28.9% is first among corners with at least 25 targets.

Slay, who is second behind Callahan in open percentage (20.2), is once again thriving as part of an Eagles defense that is continually taking the ball away. He has eight pass breakups and three interceptions to go along with his superb coverage numbers.

The flexibility of James has been critical to the aforementioned success in the Chargers secondary. His burn rate allowed of 35.7% ranks third in his position, while James has also proven an asset rushing the passer with three sacks.

You can’t watch a 49ers game without Hufanga being compared to Troy Polamalu. He has unquestionably earned such plaudits, giving up the second-fewest burn yards per target (5.68) among safeties and recording the best big-play rate (8.0%). With three interceptions, six pass breakups, five tackles for loss, four stuffs and a sack, he is setting the standard for splash plays at safety.