Season of Surprises: Who Are the NFL’s Biggest Over and Underperforming Teams? | The Analyst 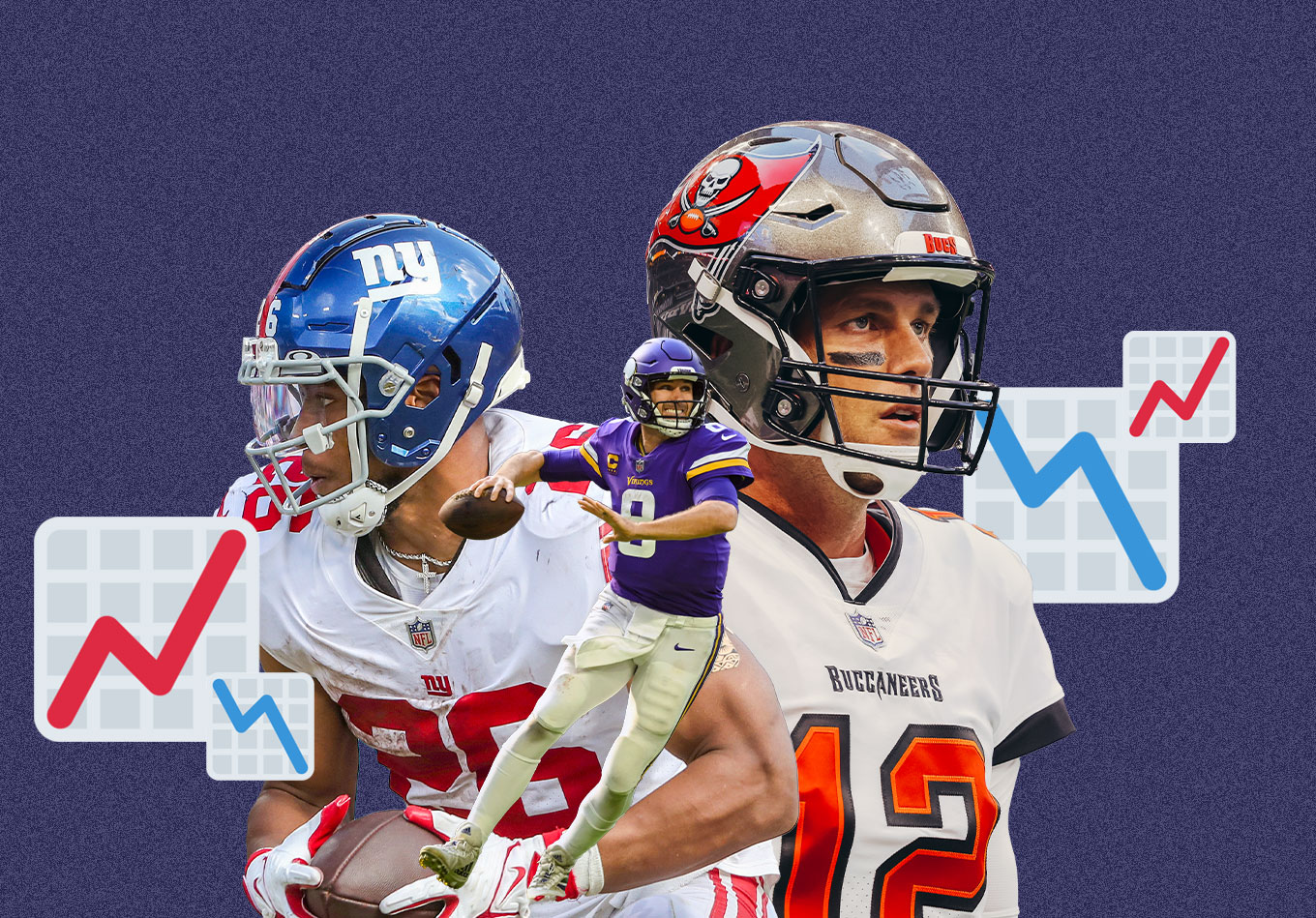 Season of Surprises: Who Are the NFL’s Biggest Over and Underperforming Teams?

It’s been a season of surprises in the NFL, with the 2022 campaign setting new standards for weirdness through nine weeks.

The AFC East and NFC East each have legitimate claims for being the most competitive divisions in football, while the Minnesota Vikings are a remarkable 7-1 and look near certainties to win the NFC North.

Geno Smith helms a Seattle Seahawks offense that is substantially more effective than that run by his predecessor Russell Wilson in Denver. Seattle stunningly holds a 1.5-game lead in an NFC West in which the defending Super Bowl champion Los Angeles Rams already look buried.

Their struggles are mirrored by those of two preseason NFC favorites, with Tom Brady and Aaron Rodgers experiencing various degrees of frustration as the Tampa Bay Buccaneers and Green Bay Packers have floundered and the two all-time greats seemingly edge closer to the cliff.

But which teams have overperformed and underperformed compared to the actual quality of their rosters and the performance of their players? We have looked to answer that question by using our expected record and team rating values, which are calculated by analyzing the in-season play of every position group and their performance baselines from previous campaigns.

The biggest overperformer is not in question, though there is a team flying high in the NFC that is difficult to nail down.

The New York Giants suffered a bump back down to earth before their Week 9 bye, losing by two scores to the Seahawks in Week 8. Yet their surge to a 6-2 start, one defined by comebacks and last-gasp fourth-quarter wins, is one of the most remarkable stories of the 2022 season.

They have competition from the 6-3 Seahawks (23rd) and 4-5 Atlanta Falcons (27th), but according to the team ratings, there is no team outperforming expectations to a greater degree. They entered Week 1 ranked 29th in the team ratings and their position has only worsened despite stunning victories over the Tennessee Titans, Green Bay Packers and Baltimore Ravens.

Indeed, they go into Week 10 last in the NFL by our team rating, which makes their probable ascension to a place in the playoffs even more stunning. And based on how the Giants have performed so far, our model calculated that they should have around 3.4 wins instead of six.

Yet with games against the Houston Texans, Detroit Lions and Jeff Saturday’s Indianapolis Colts on the second half of their schedule, it’s tough to envision some sort of massive slump down the stretch for the Giants and NFL Coach of the Year candidate Brian Daboll.

The Seahawks aren’t the only ones on the west coast that are substantially overperforming their rating. The Los Angeles Chargers rank 19th despite being 5-3. That rating could be considered a fair assessment of a Chargers team that has struggled to keep offensive weapons healthy and has dramatically failed to meet expectations on defense after plunging significant resources into that side of the ball.

The Chargers’ efforts to fix their run defense have not brought about an improvement as Los Angeles has allowed a league-worst 5.7 yards per play on the ground. The Chargers’ team rating is illustrative of a roster being pulled up by its quarterback, as Justin Herbert sits sixth in EVE on expected passing situations among quarterbacks with at least 50 such plays.

For the Tennessee Titans, their overperformance from a team rating that has them 21st in the league is partially a product of playing the Colts twice and claiming wins over teams such as the Houston Texans and Washington Commanders – both rank in the bottom four of the league by the same measure.

The New York Jets (22nd) sit just below the Titans after surging to a 6-3 mark behind a defense that is allowing only 4.79 yards per play and just shackled Josh Allen and the high-powered Buffalo Bills in Week 9.

The Vikings’ 7-1 start has been a huge surprise to many, but an impressive season was expected by the team rating. Minnesota was sixth by that measure going into Week 1 and after beating all its opponents except for the unbeaten Philadelphia Eagles through eight weeks, the team remains firmly in that position as one of the NFC’s best.

But when the Vikings’ results data was plugged into the team rating calculator, it delivered a win projection of just 3.6 for Minnesota, suggesting they’re massively overperforming. We still like them moving forward, but they’ve played below expectations so far and have still come away with wins.

That argument is backed up by the Vikings’ standing in EVE. They are 21st overall, 22nd on offense and 17th on defense. In essence, the team ratings believe in the talent but the overall production and efficiency have not been there for a team that has won six of their games by one score. The Vikings are in an excellent position to get in the dance, but they may not stick around for long if they cannot raise their level against teams better equipped to punish underwhelming displays.

The Buccaneers and the Packers played in the NFC championship game two seasons ago, and there were those who believed they would return to such heights in 2022.

Through the first nine weeks of the season, the Brady-led Bucs and Rodgers and the Packers have looked anything but playoff contenders, Green Bay in particular now facing a massive uphill climb to reach the postseason after dropping to 3-6.

Tampa Bay is in a stronger position atop a poor NFC South at 4-5, but rarely at any point have they or the Packers produced performances to suggest they can contend for the NFC title. Yet the team rating still thinks extremely highly of both the Bucs and the Packers, as they each reside in the top 10 going into Week 10. Tampa Bay is fifth and Green Bay eighth.

For Tampa Bay, which ranks fifth in overall EVE (our Efficiency Versus Expected model), that is a reflection of the overall strength of what is still an impressive roster. Green Bay’s (16th in EVE) position in the team rating is more likely to be tied to Rodgers’ MVP-level baselines of previous years.

The struggles of the 3-5 Rams appear to be less of a surprise looking at the team rating, which has Los Angeles 16th ahead of Week 10. The same data also points to a clear belief the San Francisco 49ers have more than enough on their roster to overturn the Seahawks’ lead in the NFC West. At 4-4, San Francisco is underperforming its team rating of fourth, trailing only the Eagles, Bills and Dallas Cowboys.

Data modeling by Kyle Cunningham-Rhoads. Enjoy this? Subscribe to our newsletter to receive five stories each Friday. It’s free. And don’t forget to check out our NFL Data Day video and podcast.