Finding Paydirt: The Most Touchdowns in a Game, Season and Postseason in NFL History | The Analyst 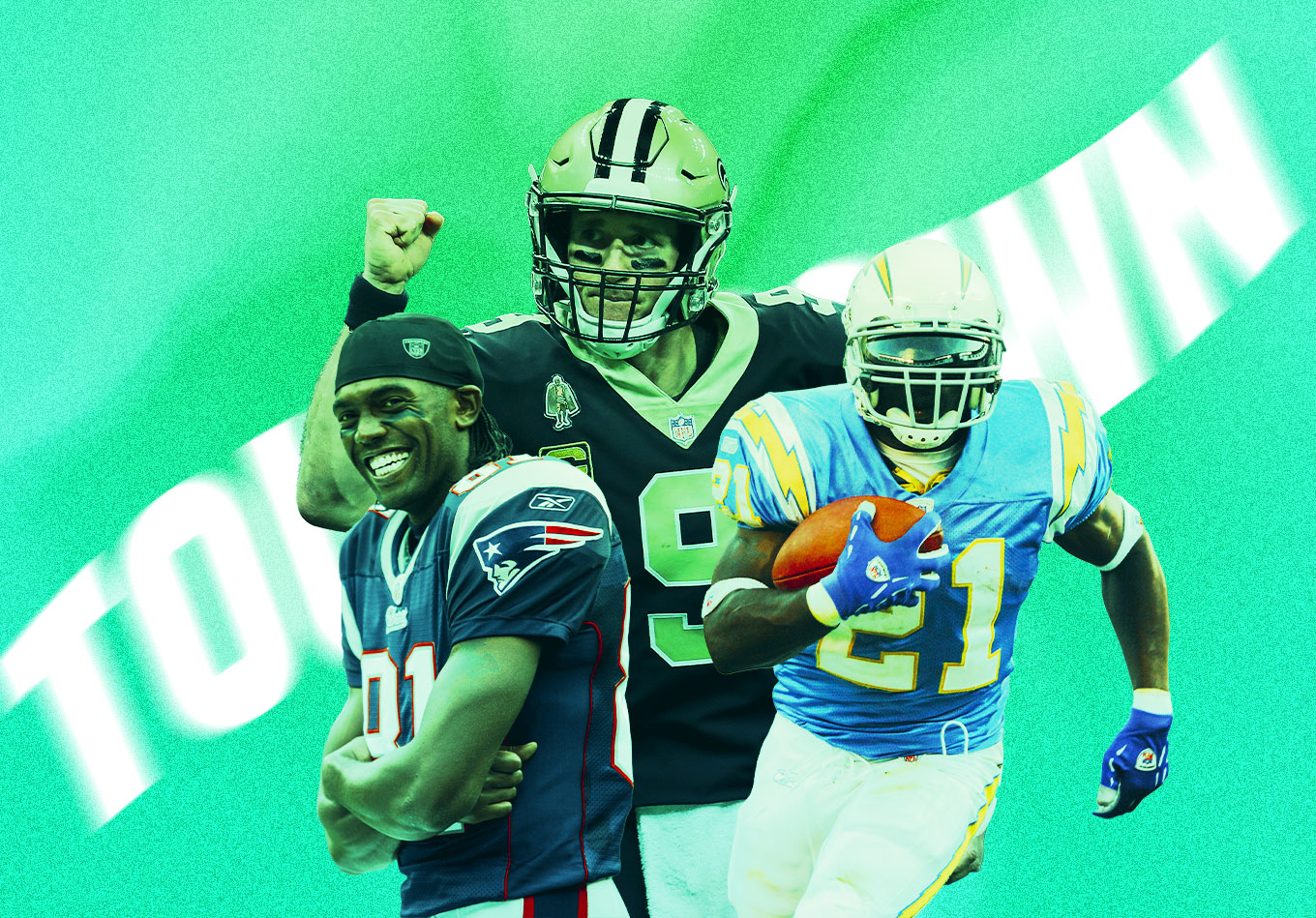 Finding Paydirt: The Most Touchdowns in a Game, Season and Postseason in NFL History

On a muddy turf at Wrigley Field on Dec. 12, 1965, Gale Sayers showcased his Hall-of-Fame versatility on the way to a performance for the ages.

The Chicago Bears star running back had an 80-yard touchdown reception, an 85-yard punt return and four rushing scores in a 54-20 rout of the San Francisco 49ers.

Sayers finished the game with 113 rushing yards on nine attempts and 89 receiving yards on two catches. He also averaged 26.8 yards on his five punt returns and remains the only player in NFL history to have four rushing TDs, a receiving score and a return TD in the same game.

Sayers was one of three players to score (not pass for) six touchdowns in a single game – along with Ernie Nevers of the Chicago Cardinals in 1929 and Dub Jones of the Cleveland Browns in 1951 – for 55 years until a New Orleans Saints back matched it on Christmas Day in 2020.

Alvin Kamara added 155 rushing yards and set a franchise record by scoring his 21st TD of the season in a 52-33 victory over the Minnesota Vikings in the comforts of the Superdome.

“Obviously, his performance was unbelievable,” Saints coach Sean Payton told reporters. “I would say most of these players have no idea how good Gale Sayers was; but growing up in Chicago, certainly you were familiar with his ability.”

But that’s just one category. We’ve delved into the history books to bring you the single-game, single-season and playoff leaders in passing, rushing and receiving touchdowns heading into the 2022 season with all data dating back to 1925.

Most Passing Touchdowns in a Game

In one of the best quarterback duels of all time, Brees threw for 505 yards and seven touchdowns in a 52-49 win over the New York Giants that was decided on Kai Forbath’s 52-yard field goal as time expired. At the same time, Eli Manning of the Giants threw for 350 yards and six scores as this shootout set an NFL record for most passing TDs in one game. “Brees had seven touchdowns. We told him the game ball is going to the kicker,” Payton joked afterward.

Foles seemed poised to set the record after throwing his seventh TD pass in the third quarter of a 49-20 win over the Oakland Raiders. Instead, Matt Barkley replaced Foles in the fourth with the game well in hand. Foles completed 22 of 28 passes for 406 yards and eclipsed his touchdown total (six) from his first five games of the 2013 season.

Forty-four years after the last seven-touchdown game but only two months before the next one, Manning completed 27 of 42 passes for 462 yards in a 49-27 Week 1 rout of the defending champion Baltimore Ravens. At the time, it was the third-most passing yards in a game in franchise history. Manning, though, would throw for 479 in a 41-20 victory over the Arizona Cardinals in 2014. That’s second only to Jake Plummer’s 499 against the Atlanta Falcons in 2004.

Most Passing Touchdowns in a Season

There was the aforementioned seven-touchdown performance to open the 2013 season, but that was just the beginning for the Hall of Famer. Manning added a five-TD effort in a 35-28 win at Kansas City in Week 13 and had seven other games in which he threw for four scores. He easily surpassed Tom Brady’s record for touchdowns in a season while guiding the Broncos all the way to the Super Bowl.

Most Passing Touchdowns in a Playoff Game

Brady started fast with five touchdown passes in the first half alone as he led the Patriots to the AFC championship game while ending Tim Tebowmania with a 45-10 rout of the Denver Broncos. Brady completed 26 of 34 passes for a franchise playoff-record 363 yards (at the time) and Rob Gronkowski, who had 10 catches for 145 yards, also tied an NFL playoff record with three touchdown receptions.

After finally getting past his nemesis in the NFC championship game, Young set the record for touchdowns in a Super Bowl by torching the San Diego Chargers in a 49-26 rout in Super Bowl XXIX in Miami. Young and the 49ers had suffered consecutive losses to the Dallas Cowboys in the conference title game before pulling out 38-28 win two weeks earlier. Young was named Super Bowl MVP after throwing for 325 yards – the fourth most in the game’s history at the time – and finally distanced himself from Joe Montana comparisons. “All along, I felt I was playing against the past,” Young told reporters afterward.

The “Mad Bomber” threw six touchdown passes in the first half of a 50-21 blowout win over the team that had traded him to Oakland, the Buffalo Bills, on Oct. 19, 1969. He held the record for TDs in a half for decades until Aaron Rodgers of the Packers matched it against the Bears in 2014. But Lamonica wasn’t done there, he fired six more in a playoff game against the Houston Oilers later that season.

Most Rushing Touchdowns in a Game

Nevers’ record for most rushing scores in a game lasted until Kamara finally matched it on Christmas Day 2020. Coincidentally, Nevers’ historic effort also came on a holiday – Thanksgiving Day 1929. But the fullback actually has the edge over Kamara because he accounted for all his team’s points, also kicking four extra points in the 40-6 win over the rival Bears. Nevers, who also pitched for the St. Louis Browns, only played five seasons in the NFL, but he made the All-Pro team all five years and the Pro Football Hall of Fame in 1963.

Most Rushing Touchdowns in a Season

It all came together for LT in 2006 when he was named an All-Pro for the second time, a Pro Bowl selection for the fourth time and the NFL MVP for the only time in his career. He not only led the league with a career-high 1,815 rushing yards, but he also ran for an NFL-record 28 touchdowns. Tomlinson finished the season with three three-TD games and two four-score efforts on the ground. He also ran for 123 yards and two touchdowns in San Diego’s 24-21 loss to the Patriots in the AFC divisional playoffs. Those playing fantasy football at the time either loved or hated him.

Most Rushing Touchdowns in a Playoff Game

On a team that had Steve Young, Jerry Rice and John Taylor, it was Watters who led the 49ers to a 44-3 rout of the Giants in the NFC divisional playoffs. He finished with 118 yards and a postseason-record five scores on 24 carries while also adding five receptions for 46 yards. “Any time you slow down guys like Jerry Rice and John Taylor, you think you’ll do OK,” Giants cornerback Mark Collins told reporters. “I never thought Ricky Watters would score five touchdowns. I was thinking, ‘Gee, when is it going to stop?’”

Most Receiving Touchdowns in a Game

Joe Montana finished with career bests of 476 passing yards and six touchdowns in a 45-35 victory over the Falcons at Atlanta-Fulton County Stadium. But it was Rice who stole the headlines with one of the best single-game performances in NFL history. The future Hall of Famer ended up with 13 catches for 225 yards and a league record-tying five scores.

Winslow might be best known for his 13-catch, 166-yard effort in the Chargers’ 41-38 overtime win over the Miami Dolphins in the 1981 AFC divisional playoffs, but he also had a 15-reception game against the Packers in 1984 and a five-touchdown performance against the Raiders that matched Bob Shaw’s 31-year record.

Shaw was considered the NFL’s first tight end in 1949 when Cleveland Rams coach Clark Shaughnessey created the position. A year later while playing for the Cardinals, he set a record that wouldn’t be equaled for three decades when he caught five TDs against the Baltimore Colts. Shaw led the league in touchdowns that season with 12, was named to the All-Pro team and played in the league’s first Pro Bowl.

Most Receiving Touchdowns in a Season

Following a disappointing season with the Oakland Raiders in 2006, Moss was traded to the Patriots for a fourth-round draft pick. With something to prove, and paired with one of the league’s best quarterbacks in Tom Brady, Moss put together one of the best seasons by a receiver in NFL history. He had eight games with at least two touchdowns on the way to a league-record 23 scores, including a 10-catch, 128-yard, four-TD effort at Buffalo in Week 11.

Most Receiving Touchdowns in a Playoff Game

In one of the most memorable playoff games in recent memory, Davis stole the show from star wideouts Tyreek Hill and Stefon Diggs. The relatively unknown receiver put together the best night of his career with eight catches for 201 yards and a playoff-record four TDs in a 42-36 overtime loss to the Chiefs in the AFC divisional round. It was also only the ninth 200-yard receiving game in NFL playoff history.