Fallen Kingdom: Is the Rams' Run as a Super Bowl Contender Over? | The Analyst 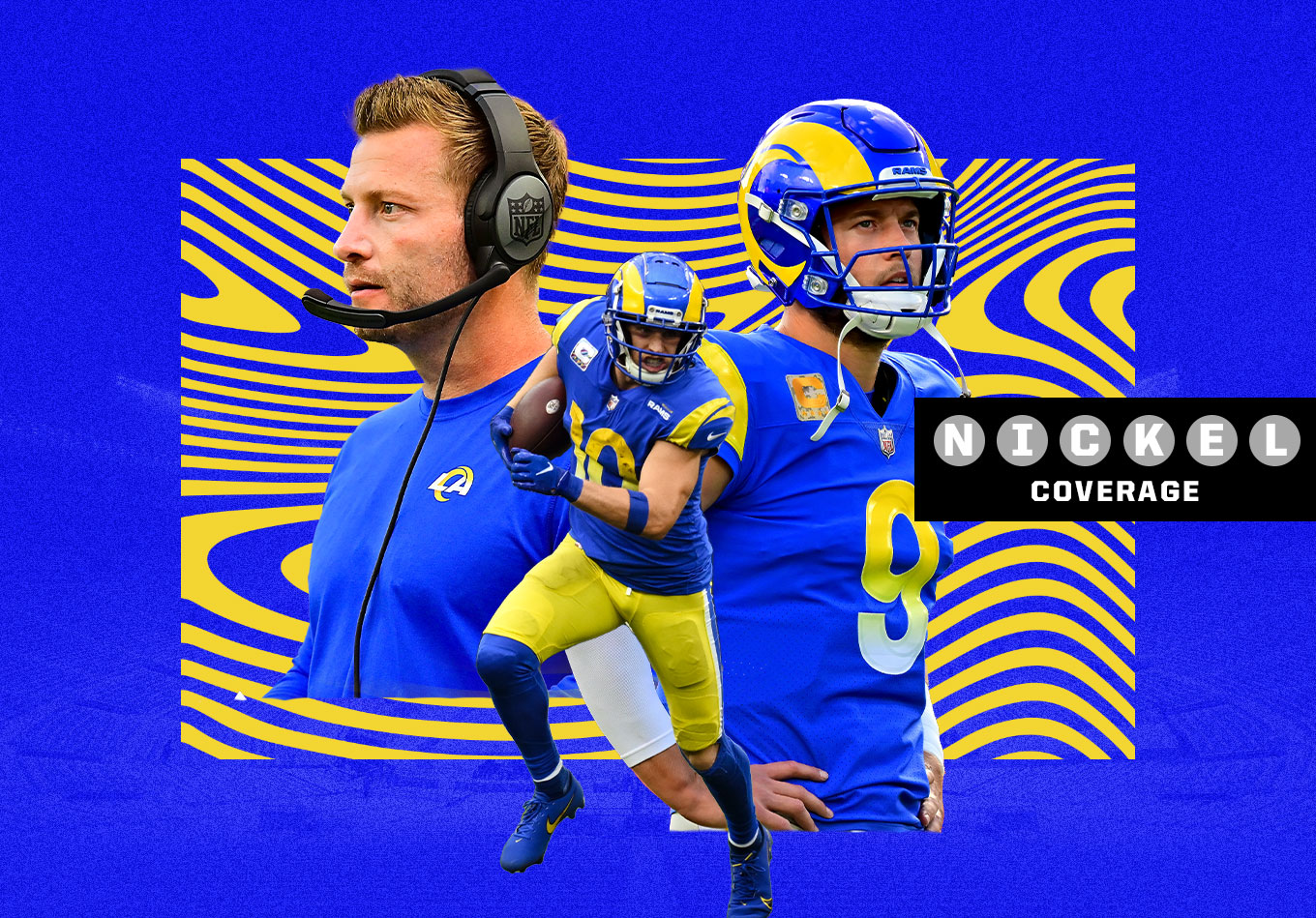 Fallen Kingdom: Is the Rams’ Run as a Super Bowl Contender Over?

That is the lesson the Los Angeles Rams are learning in an extremely hard way in the 2022 season.

The price the Rams are paying, one which has them 3-5 and above only the Arizona Cardinals in the NFC West, is one they will be happy to pay in the grand scheme of things given they lifted the Lombardi Trophy last season.

But their struggles this season are a consequence of the ultra-aggressive strategy that has seen the Rams consistently part with draft capital to acquire star players.

Now the stars of their top-heavy roster are failing to elevate those around them and while many may view this pain as tolerable for 2022, there’s reason to be concerned about the viability of this team as a long-term contender.

Even in a less than stellar NFC, it is tough to see this version of the Rams recovering to make a run at the postseason. And right now it is just as difficult to envision a path through which Los Angeles can return to prominence in the years to come.

The root of the Rams’ problems is on offense. That is not a revelation to anyone who has even briefly watched Sean McVay’s group in 2022. The Los Angeles’ attack poses nothing close to the same threat it presented last season, and is one of the worst in the NFL through eight games.

In Sunday’s defeat to a Tampa Bay Buccaneers team that had lost five of their previous six games, the Rams averaged a pitiful 3.7 yards per play. Their season average of 4.71 is last in the NFL, while only the Carolina Panthers, Tennessee Titans and Houston Texans have produced fewer explosive plays of 10 yards or more than Los Angeles (86).

Blame could be laid at the feet of Matthew Stafford, the quarterback the Rams gave up a pair of first-round picks to acquire last offseason and who put them over the top in 2021. His well-thrown percentage of 80.0 is below the league average (80.6) for quarterbacks with a minimum of 100 attempts. But it’s actually a stark improvement from his first season with the Rams, when he delivered an accurate, well-thrown ball on 73.7% of his attempts.

The number to focus on with Stafford is his air yards per attempt, which has dropped off substantially from 8.62 in 2021 to 6.35 this season. In other words, Stafford’s accuracy is up because the degree of difficulty on throws he is attempting is significantly down, and that is a symptom of dreadful pass protection.

Los Angeles’ sack rate allowed of 8.7% is the fourth worst in the NFL, while the time from Stafford’s snap to release has dropped from 2.72 seconds in 2021 to 2.54 this campaign. It’s a reflection of the short passing attack the Rams have adopted to prevent their quarterback taking too much damage and how often he has been hurried into getting the ball out.

In the Week 8 loss against the San Francisco 49ers, Stafford averaged 4.71 air yards per attempt – the lowest of any quarterback to attempt multiple passes – as the attack was reliant on the screen pass and the occasional deep shot to Cooper Kupp and had no answer when both those options were taken away.

The Rams’ lack of a riposte has been jarring to watch this season, and even Kupp has not been as effective as they would hope.

Of course, it would be difficult for Kupp not to endure a drop-off after leading the NFL in catches, receiving yards and touchdowns in 2021.

But the fall, at least by one measure, has been drastic.

Kupp’s burn rate (58.7%) has taken a huge dip from his 2021 rate (66.5%), which ranked ninth in the NFL among wideouts with at least 100 targets. Burn percentage measures how often a receiver wins his matchup on a play in which he’s targeted.

When he does win his coverage matchup, Kupp is at least still consistently creating clear separation. His burn yards per route average of 4.8 is up on his league-leading tally of 4.0 from last season and trails only Tyreek Hill (5.6) for receivers with a minimum of 50 targets this season.

The problem the Rams have is not necessarily that Kupp isn’t performing at the level of his 2021 zenith, it’s that he has no support from his surrounding cast. Down the stretch last year, he had Odell Beckham Jr. to divert coverage away from him. This season, no Rams wideout with at least 10 targets has a burn rate higher than Kupp’s, with Allen Robinson (48.8%) among the worst in the league by that measure. At tight end, Tyler Higbee (52.7%) is below the average for his position.

And the lack of non-Kupp difference makers extends to the run game.

Los Angeles’ ground attack largely consists of jet sweeps to Kupp, with carries of any other variety resulting in precious little gain.

The Buccaneers (2.98 yards per carry) are the sole team with a worse rushing average than the Rams (3.2), but no offense has a worse ratio of successful runs than Los Angeles. McVay’s attack has a success rate of just 22.7% on the ground. The team directly above the Rams, the New England Patriots, are a full eight percentage points clear. We deem a successful rushing play as one that gains 50% of the yards to gain on first down, 70% on second down or 100% on third or fourth down.

The Rams’ decision to try to trade running back Cam Akers and then reintegrating him after failing to do so encapsulates their woes on the ground and is emblematic of a season in which nothing has gone right for an offense that is fourth worst in the NFL with an overall success rate of 35.2%.

Any room for optimism comes on the defensive side of the ball.

Time for a Reset?

While Stafford and, to a lesser extent, Kupp may be in the midst of the down years, the cornerstones the Rams possess on defense are still performing at an extremely high level.

The defense had the Rams in position to get back to winning ways in Tampa, holding the Bucs to nine points going into the final quarter, and remains one of the better units in the NFL.

Los Angeles ranks 10th in the NFL with 5.29 yards allowed per play, with Aaron Donald and Jalen Ramsey both continuing to excel.

Donald headed into Week 9 having won 37 of his 50 pass rushes, good for a league-best stunt-adjusted win rate of 73.7%. His frequent interior pressure forced Tom Brady to get the ball out at an average of 2.21 seconds from snap to release. Only Zach Wilson (2.04) was quicker in Week 9.

Ramsey, meanwhile, went into the Bucs game with a combined open-allowed percentage across man and zone of 27.7% (the average for cornerbacks is 34.0%).

But the Rams’ defense has a similar issue to that of the offense. Save for emerging linebacker Ernest Jones, the group is short on young impact players who can develop around Donald and Ramsey.

And, on the final Tampa Bay drive of the Buccaneers’ 16-13 win, a defense that had seen the offense inexplicably give the ball back after running the ball three times and using under a minute of clock with the chance to kill the game with a first down proved powerless to stop Brady from authoring another game-winning drive.

Brady’s decisiveness and quick release rendered Donald a non-factor, and Ramsey found himself similarly helpless and picked on as the Bucs successfully attacked the Rams’ soft zone coverage on a drive capped by tight end Cade Otton’s decisive score.

Asked if he thought the defense would be back on the field after the Rams stopped the Bucs in the red zone on Tampa’s penultimate drive, Ramsey replied: “We should not have been.”

Those five words spoke volumes as to what Ramsey thinks of the offense, but the cold hard truth is that – even though the defense is the superior unit – the Rams in their current form are not doing anything well enough to escape avoidable situations.

And their avenues to get better are not obvious. Their offensive fortunes could be improved by a greater reliance on play-action passes, which the Rams are utilizing just 10.4% of the time (the average is 12.4%) but racking up 11.52 yards per play when they do.

That is unlikely to be a cure-all, though, and any reticence on Stafford’s part to turn his back to the defense for a fake while playing behind this offensive line would be understandable.

The resources with which they could boost the offensive front and collection of playmakers or the defense in the coming offseason are thin. The Rams have a second- and third-round pick this year and four selections across the final two rounds, but asking the front office to unearth instant impact players from those non-premium picks is a tall order for a franchise that has racked up its share of misses with the draft selections it has held on to in recent years.

Projected to be $2 million over the cap in 2023, don’t expect a free agency splurge from the Rams either.

Given the retirement rumors that have previously swirled around Donald and McVay, this is a situation that would be ripe for a rebuild were the Rams not locked into Stafford’s contract until 2026. Instead, if they cannot produce a second-half surge, it’s likely to be more of an attempt at a reset that quickly gets the Rams back in contention.

With the paucity of tools they have to attack that challenge, successfully doing so would be as impressive as the comebacks this star-studded team produced to lift the Lombardi back in February.