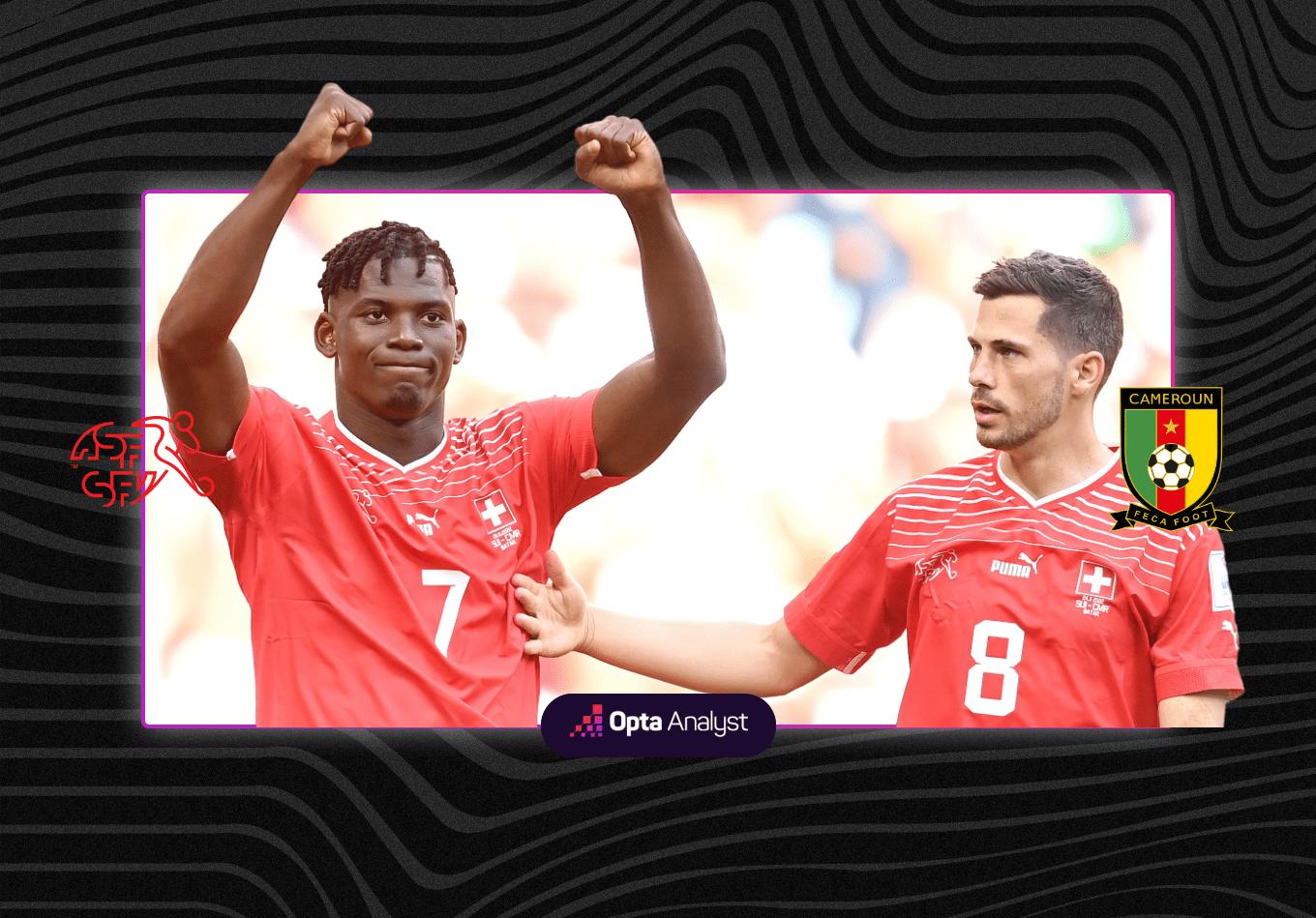 With Brazil their opponents in game two, Switzerland will have marked down their opening clash against Cameroon as a must-win.

Sure enough, they started with more urgency, getting on the ball and attempting to force the issue against a Cameroon side content to sit deep and maintain their defensive shape. The Swiss ticked over 60% possession in the opening 20 mins, frequently looking to feed the ball into Xherdan Shaqiri and Ruben Vargas on the flanks.

But, in truth, for all the probing passing, they failed to threaten André Onana in the Cameroon goal. Granit Xhaka blazed a speculative shot over the bar, and Manuel Akanji missed a free header from a corner, but Cameroon didn’t face a single shot on target in the first half of a World Cup game for only the second time in their World Cup history.

Instead, it was Cameroon who looked far more dangerous, springing quickly and directly from their defensive base. The first chance of the game came from a vertical, slicing ball through the heart of Swiss defence, with Bryan Mbuemo’s shot parried out and Karl Toko-Ekambi firing the rebound over.

Cameroon’s front three looked really lively and were getting a lot of joy exploiting the spaces in behind Switzerland’s full backs.

Both Toko-Ekambi and Eric Choupo-Moting were exceptional at holding the ball up, laying it off and spinning in behind. A glance at Toko-Ekambi’s pass map below,shows how many of his passes were back inside towards the centre of the pitch, for his team-mates to then fire balls through the Swiss back four.

The first half saw two contrasting styles, but one looked far more dangerous. Cameroon had 10 touches in the Swiss box, twice the number than Murat Yakin’s side could muster.

But the game was blown wide open by a beautiful passing move from Switzerland. A 13-pass sequence stretched Cameroon all over the pitch, and was finished by Breel Embolo, sweeping in Shaqiri’s cutback. Embolo now has his third goal in consecutive matches for Switzerland – his best scoring streak for his national side – and this one produced what might be the first muted celebration™ on the international stage, with Embolo born in Cameroonian capital Yaoundé.

Shaqiri is one of those players who just always turns up on the biggest stage. Remarkably, with eight goals and four assists, he’s been involved in half of all of Switzerland’s goals across the last four major tournaments.

Going behind forced Cameroon to play higher up the pitch, opening up spaces in behind their defensive line for the Swiss wide players to exploit. Another move down the right-hand side, another cut-back, and a Vargas strike produced a fine save from Onana.

Cameroon chased hard, but Switzerland managed the game expertly once going ahead. The Indomitable Lions managed just three shots in the second half, one fewer than Switzerland, but the expected goals value of those chances varied greatly (0.31 to Switzerland’s 0.96)

It’s now eight consecutive World Cup defeats for Cameroon. Only Mexico have ever lost more games in a row in the competition’s history (9 between 1930 & 1958).

Serbia are next up in a massive game for the African side.