Spain vs. Germany: Prediction and Preview | The Analyst 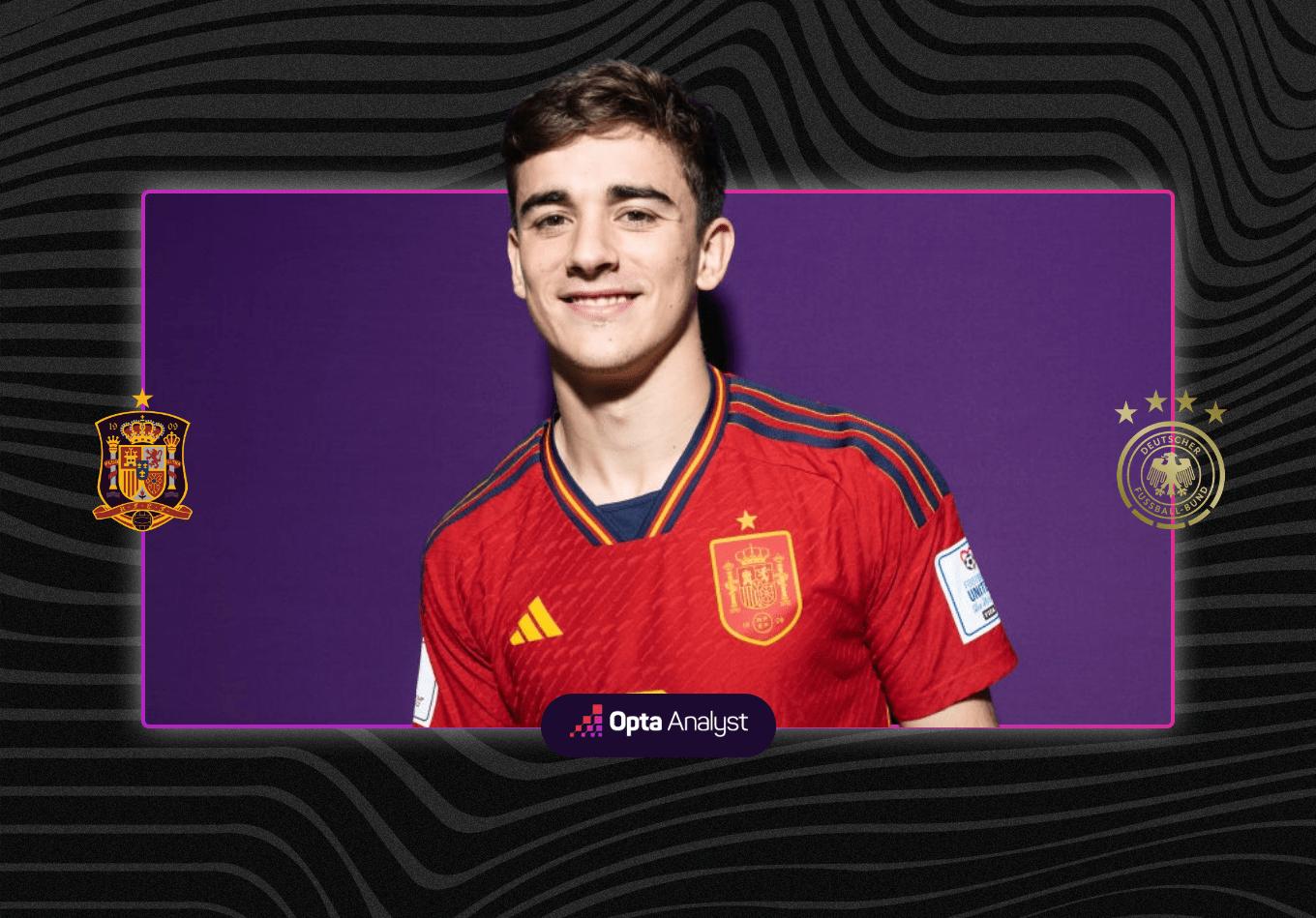 Spain vs. Germany: Prediction and Preview

We preview the 2022 World Cup match between Spain and Germany, including our pre-match prediction for each team’s second game in Group E.

Play the Opta Challenge for Spain vs. Germany now for a chance to win $500

After suffering a shock 2-1 defeat to Japan on matchday one, Germany could ideally do with a swift and straightforward response.

Unfortunately for them, awaiting Die Nationalelf at Al Bayt Stadium on Sunday will be a Spain side that remarkably won 7-0 against Costa Rica last time out.

Germany know defeat could doom them to a second successive group-stage elimination at the World Cup, an astonishing turn of events given that before 2018 they had not failed to get past the tournament’s first round since 1938.

Another loss would consign Germany to three consecutive World Cup defeats for the first time ever – they have also never been beaten twice in the group stage of a single edition before.

The pressure is already on head coach Hansi Flick, who suggested one of his main objectives before Sunday’s game is to ensure the team believes they can prevail.

“The team and every person can always develop,” he said. “That’s why the team still has potential, which it’s not quite delivering at the moment.

“Nevertheless, I believe we have good quality. Yes, we trust the team. We’re positive and just really want to see that we approach this game on Sunday against Spain positively.

“It’s simply important to deal with defeats, but also to clear your head and focus on the new task, and that’s our goal, to get the team to the point where they naturally believe that they can push this thing in the right direction on Sunday.”

Regardless of Germany’s belief, Flick’s side can at least take solace in the fact they pretty much know how Spain will play – Luis Enrique is never secretive about his expectations for La Roja.

In their obliteration of Costa Rica, Spain recorded a possession figure of 81.9%, setting a new record since Opta have this data available in the World Cup (from 1966), surpassing Argentina’s 80.3% against Greece in 2010.

That was Spain’s biggest ever World Cup victory and they also boast a strong recent record over Germany, having lost only one of their previous seven meetings.

Granted, Spain have only won their first two games of a World Cup three times and not since 2006, but Luis Enrique was adamant after the Costa Rica win that complacency will not be an issue.

This may be a young Spain squad, but they have long resembled an immensely unified unit under the guidance of Luis Enrique, who acts as a sort of pressure sponge, and Rodri believes their overall connection is their key strength.

“It’s true we have been working very good for a long time, maybe on the results front,” he said. “Nowadays in football there is great equality, but the performance was there [against Costa Rica], and it was good.

“The sensations were great, the team is whole in every line, defensively and offensively the team worked like an accordion.

“The goals for me were a consequence of our play, and what I liked more about the other day is that we know that the collective is what will bring us success.

“That is why everyone was remarkable, everyone had a great contribution, and everyone respected his position and his role.”

He was withdrawn before the hour mark against Costa Rica, but that was more than enough time to show just how integral Pedri is to how Spain play. He completed 97% of his passes (86/89), but what made that even more impressive was the fact he was the fulcrum of La Roja’s attacking play, with only Dani Olmo (33) attempting more passes in the final third than him (30).

Managing to maintain that accuracy in such a congested area of the pitch where he was expected to take risks was mightily impressive, and he even managed to tally a joint-high three key passes. Germany would be wise to pay him special attention.

The defeat to Japan was a game to forget for Germany, but Gnabry did at least look lively. He managed six shots on matchday one, with three of them on target, and was very involved.

In fact, he played a part in 12 open-play sequences that ended a shot, with Kylian Mbappe (13) the only player to better him in that regard over the first round of matches at the tournament. He will need to do better in front of goal, but he clearly has the capacity to cause Spain problems.

There is every chance this will be close.

Spain go into the game as the favourites with a 42.7% chance of success, according to our prediction model, but this means there is a 57.3% likelihood of them failing to win.

That incorporates Germany’s 31.9% probability of emerging victorious, which also highlights how difficult this game is to call from the outset.