Spain 1-1 Germany: Substitute Strikers Serve Up The Narrative | The Analyst 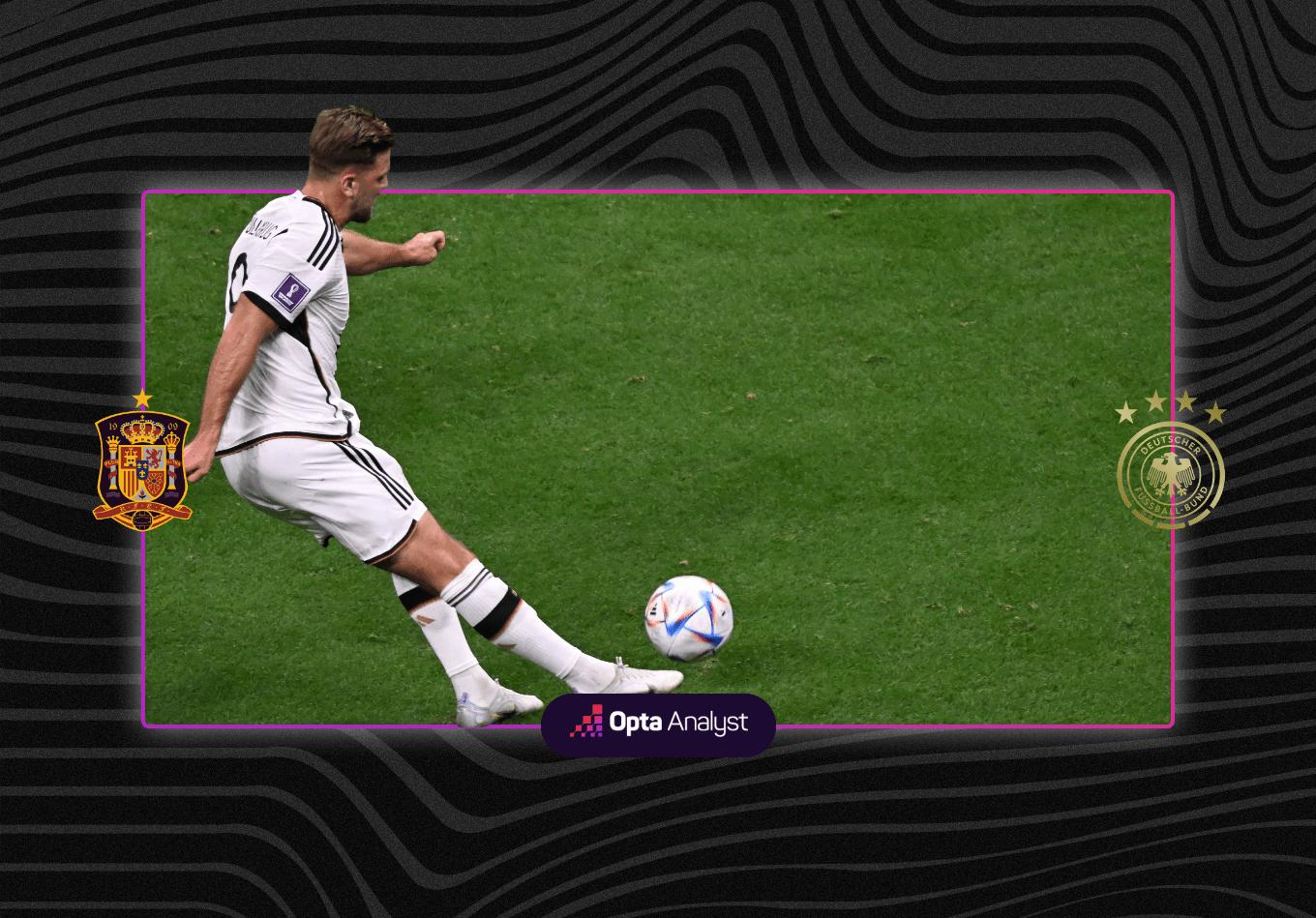 Everybody thirstily highlighted this fixture when the World Cup groups were drawn, and Germany’s seismic loss to Japan in their first game only ramped up the interest (and pressure on the Germans) ahead of this European heavyweight clash. Spain scored a measly eight goals in their successful-but-dreary 2010 World Cup campaign, but came into this game just one short of that total after a single game in 2022. This is an expansive and developing Spain team but would they be able show it on the biggest stage? Which, in late November 2022, means the Al Bayt Stadium, Qatar.

Tournament specialist Dani Olmo got the ball rolling in the seventh minute when he lashed a shot goalwards, only to be denied by a combination of Manuel Neuer’s left hand and the crossbar. It came after a sequence of 35 passes from Olmo’s team and a move more Spanish can barely be envisaged, even by scientists.

Germany were sporadically threatening but Spain’s pressing had them operating on a knife-edge of functionality throughout most of the first half. The likes of Neuer and Antonio Rüdiger are not the sort of players to panic – and they didn’t – but they were forced to jettison the ball in an unorthodox fashion on more than one occasion as Spain switched the ball from flank to flank. Further forward, Rüdiger attempted a 35-yarder which would have ended in the Persian Gulf if there hadn’t been a stadium in the way. He can’t be blamed: this Spain get in your head and hack your decision-making processes.

Rüdiger had a much better effort at goal in the 40th minute, firmly heading the ball into the Spanish net from a free-kick. It was a decisive finish but that was partly because the Real Madrid man had gone too early, a fact that VAR confirmed nice and quickly. The hated 1925 offside law once again rearing its pre-World War II modern head. Rüdiger even found time for another shot as the half concluded, hitting a Marco Van Basten-style volley from the right hand side of the penalty area. Two (well, maybe one and a half) legitimate attempts and a disallowed goal made Rüdiger the surprise stand-out attacker of the first half.

It was 47 enjoyable minutes of probing, prodding and special experimentation from two teams operating at a very high level. Like a knockout game in the group stage, which is essentially what it was. Spain ended the half with a possession figure of 68%, David Raum ended it with the most interceptions.

Germany had the first shot of the second half, after a loose pass from goalkeeper Unai Simon led to Joshua Kimmich squirming an effort on target, which allowed Simon to make amends. A striker in that position might have made much more of the opportunity, but the Germany squad is light on those options, as we know. Jamal Musiala continued to impress, his close control and Spain’s methods for dealing with it supplying Germany with a few set-pieces, which they proceeded to squander.

Spain had sought to solve their own lack of pure striking options by bringing on Álvaro Morata and, surprise surprise, he opened the scoring in the 62nd minute, expertly finishing a Jordi Alba wide delivery with a beautiful finish. It was only the sixth time in World Cup history that a player had scored as a substitute in successive games, and it ensured that Germany’s search for a first clean sheet in the whole of 2022 will continue. Morata has now scored eight goals at Euros and World Cups, at least twice as many as any other player for Spain since 2016. He’s better than you think he is.

Jamal Musiala, who was only seven when Spain won the World Cup in 2010, continued to carry most of Germany’s threat. In the space of 42 seconds he crafted a chance for substitute Niclas Füllkrug before getting a clear opportunity himself, forcing Unai Simon into another decent save.

In a world of ephemeral schemers and drifting 10s, this World Cup is reminding us that actual centre-forwards are still pretty useful. Brazil have Richarlison up top, a man who has bruised his way around the Premier League for years, while Spain have looked better in both games once Morata has come on. France have enjoyed yet another bout of vintage input from Olivier Giroud and Germany saved themselves in this game via some muscular impact from Füllkrug, a Bundesliga journeyman making only his fourth appearance for his country. It was the first World Cup goal from a German substitute since Mario Götze in the 2014 and, while not as iconic a contribution, is almost as important as it means Germany still have a chance of getting through a group stage that has tormented them thus far. Füllkrug had four touches in the box in his brief cameo, more than any other Germany player in this game and four more than Thomas Müller.

The lesson is clear: hit the big man and still you have a chance.