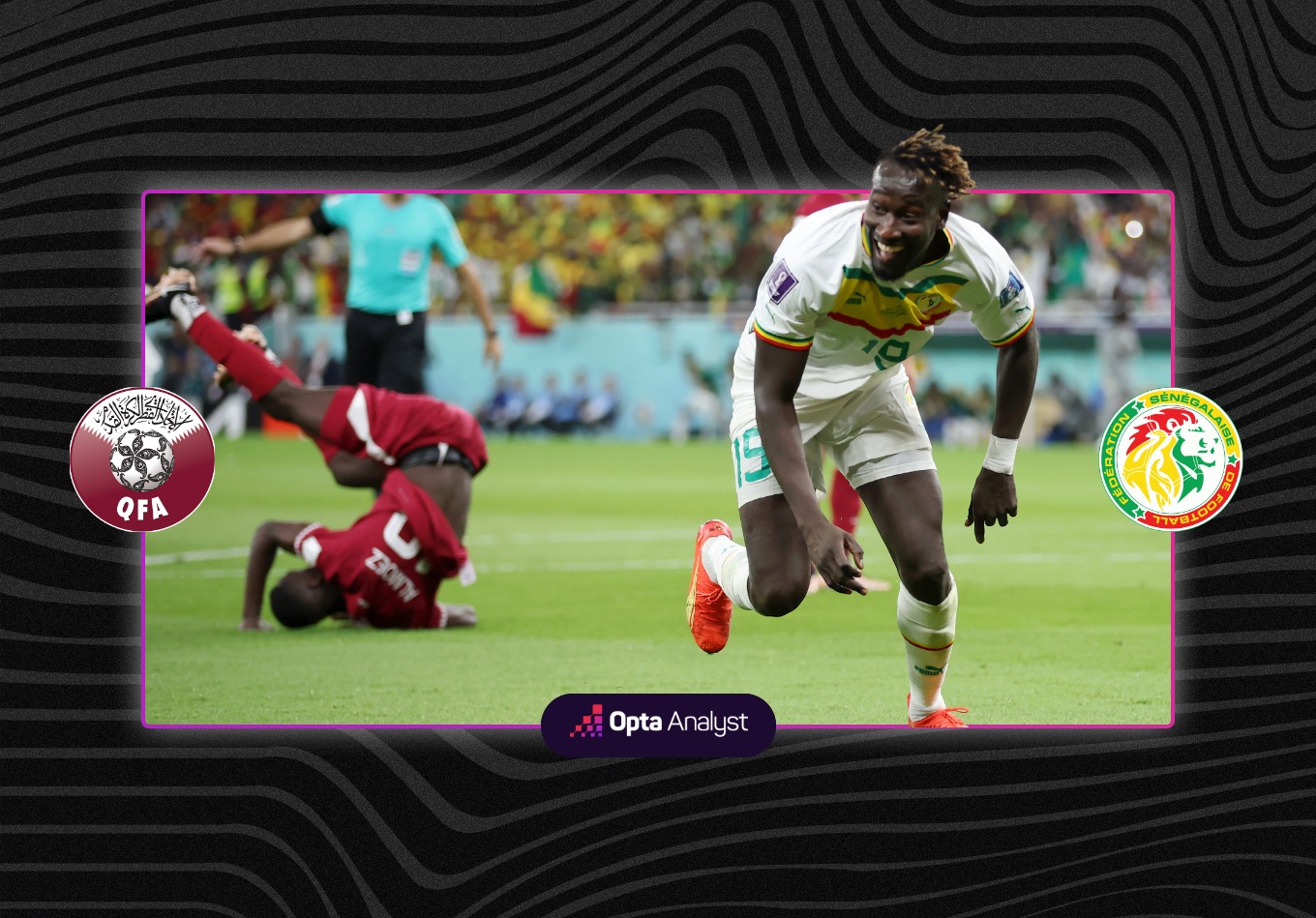 In many instances a picture speaks a thousand words. Here’s the momentum graphic – a measure of attacking threat – for Senegal’s 3-1 win over the disappointing hosts Qatar.

Senegal’s quality early on was clear to see on the pitch and in the numbers. Nine of Senegal’s starting XI play their football in Europe’s top five leagues. Akram Afif was the only player in Qatar’s starting XI with any experience at the same level with time in La Liga at Sporting Gijon. The gulf appeared to be all too much. Senegal enjoyed 61% possession, dominating the ball while looking to probe and pry open Qatar’s defence, who seemed content to sit deep.

When you play in the way that Qatar have opted to do so far in this World Cup, it doesn’t allow for any individual errors. And on the stroke of half-time that’s exactly what happened, with Boualem Khoukhi failing to clear his lines and Boulaye Dia punishing him by burying the loose ball into the net.

At the half-way mark of this match, Meshaal Barsham, the Qatari goalkeeper, was the only player to create a chance for the hosts. Through 45 minutes, they were still awaiting their first shot on target in the competition, and in total across their one and a half matches, they’d managed seven shots.

Senegal added a second right after half-time, a brilliant near-post header from Diedhiuo off an inswinging corner. It appeared to effectively kill the game. But then, as the momentum graphic shows above, Senegal completely took their foot off the gas, easing up as they rang the changes.

That was enough to give Qatar a foothold in the game. The hosts began to commit a few more players forward and began swinging balls into the box, hoping that a bit of chaos and/or good fortune would come their way.

And so it did. A cross from Ismaeel Mohammad was met with a bullet header from Mohammed Muntari, and Qatar had their first ever World Cup goal.

It was part of a clear change in tact from the hosts, who whipped in just five crosses in the first half compared to 15 in the second. With extra bodies piling forward, they generated eight shots in the second half – more than Senegal managed – and they actually enjoyed fractionally more possession.

But a late third for Senegal iced the game with Bamba Dieng sweeping in a low cross in the 84th minute.

In the end, the gulf in class was insurmountable for the hosts. But that brief 20-minute in the second half might have them asking ‘what if’ when looking back on their 2022 World Cup journey.

As for Senegal, following up their opening-match defeat with this win boosts their chances of advancing to the last 16 to 40.2%. It sets up a potentially thrilling end to the group stage with fellow Group A contenders Ecuador. Both sides will be alive regardless of Ecuador’s result against group-favourites the Netherlands.