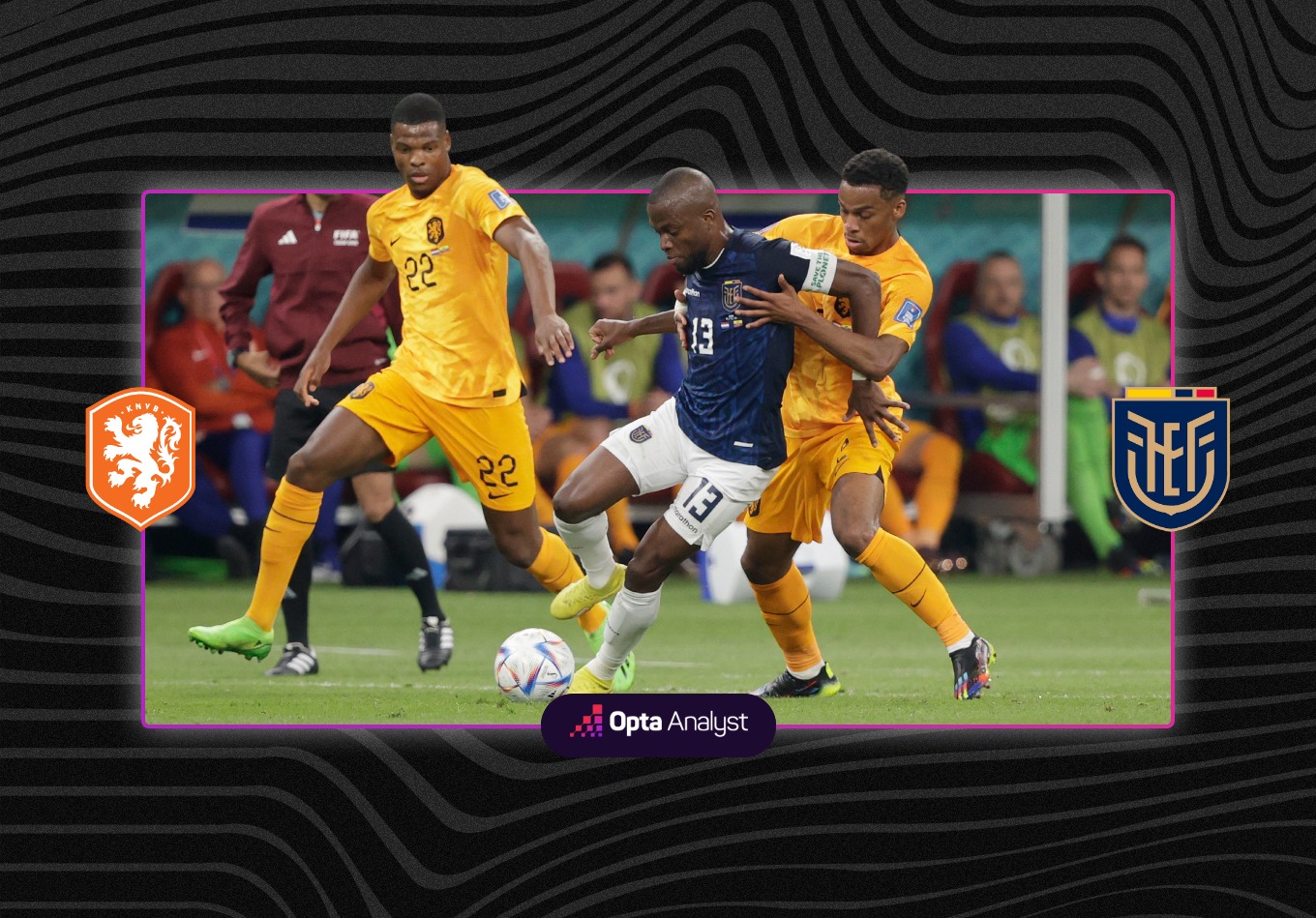 Ecuador entered Matchday 2 at the World Cup with a defensive run that would make catenaccio afficionados proud. They hadn’t conceded in a team-record seven straight matches, amounting to 696 without conceding. It was part of a larger run of 16 straight unbeaten matches and while this tournament has taught us unbeaten international runs are to be taken with a grain of artisan South American salt, that run did include draws with Brazil and Argentina.

It now includes one with the Netherlands.

Combine that Ecuadorean defensive record with the fact that it took the Dutch quite a while in their 2-0 opening win over Senegal to get going in the attack, and it would have made perfect sense for this Group A match to require some time to simmer.

The simmer hardly made it through a song.

Cody Gakpo’s second touch of the match was an assertive strike from the top of the box that found the back of the net just after the five-minute mark. It gave the 23-year-old his 34th goal involvement in 28 appearances for club and country this season with 16 goals and 18 assists, including three goals and an assist for the Netherlands.

It’s the latest in a string of impressive efficiency with the PSV winger scoring five goals from his last six shots on target for the Netherlands. So 96 minutes into his World Cup career, Gakpo has as many World Cup goals as Ronaldinho, Alan Shearer, Andrés Iniesta and fellow Oranje Patrick Kluivert. Next up: Johan Cruyff, who scored three in seven matches.

From the Dutch perspective, the thing about a quick goal is it requires you to either hold the lead or add to it, and the Netherlands side as a whole didn’t make it immediately clear they’d be able to do either. From the catenaccio perspective, the thing about your style is if you concede, you tend not to be particularly seasoned at equalising. But Ecuador are very much not a catenaccio side.

Ecuador came close in the 32nd minute with a near-post strike by – you guessed it – Enner Valencia for their best official opportunity of the half. Less officially, there was an Ecuador goal celebration in first-half stoppage time that was disallowed for offside on goalkeeper line of sight.

Called off for the laws of the game, there was something else that just wasn’t quite right about it. Valencia wasn’t on the end of it – Pervis Estupiñán put it away – and Ecuador are very much getting to the point of establishing the laws of Valencia. Four minutes into the second half, the laws of gravity dropped an Andries Nopport rebound at Valencia’s feet and he finished an uncontested equaliser that was very much coming after the Dutch gave the ball away in midfield. The Fenerbahçe striker has now scored La Tri’s last six goals at World Cups to become just the fourth player ever to score six consecutive goals for a nation in the competition (Portugal’s Eusébio in 1966, Italy’s Paolo Rossi in 1982 and Russia’s Oleg Salenko in 1994). It also put him in some more contemporary international company:

At that point in the match, it was Ecuador’s eighth shot to the Netherlands’ one. Sure, there’s a game-state element to it. You get a lead – be it in the sixth or 76th – and it can be in a side’s nature to play conservatively, but that tends not to be the Dutch way. Instead, they struggled to do much in the midfield that worked the ball into dangerous areas of the pitch.

It very nearly got worse in the 59th with Gonzalo Plata testing the laws of Valencia, physics and expected goals all at once by going top corner from distance and being denied by the crossbar. That shot advantage ballooned to 15-2 for Ecuador.

We went into this match perhaps a bit ahead of ourselves in thinking Matchday 3 would be the Netherlands’ inconsequential tune-up for the knockouts while Ecuador and Senegal would be playing for second place. That may still play out with the Netherlands seemingly primed for seven points given their unimpressive Qatari opponents, but after MD2, Ecuador are equal with the Dutch atop Group A on identical points, goal difference and goals scored.

After 85+ minutes on the back foot, it seems the Netherlands may been just good enough to win a below average group, but have they been good enough to do anything more? They seem unsettled in the midfield, and they produced nothing after Gakpo’s strike. Their total of two shots is far and away their lowest in a World Cup match (dating to 1966) with their previous recorded low seven with 10 being their previous worst in a group game.

As suspected after Senegal’s 3-1 win over Qatar earlier today, it sets up a banger between the Lions of Teranga and La Tri for a spot in the last 16. It’s just that Ecuador have a point more than anticipated and have put all potential World Cup opponents going forward on alert.