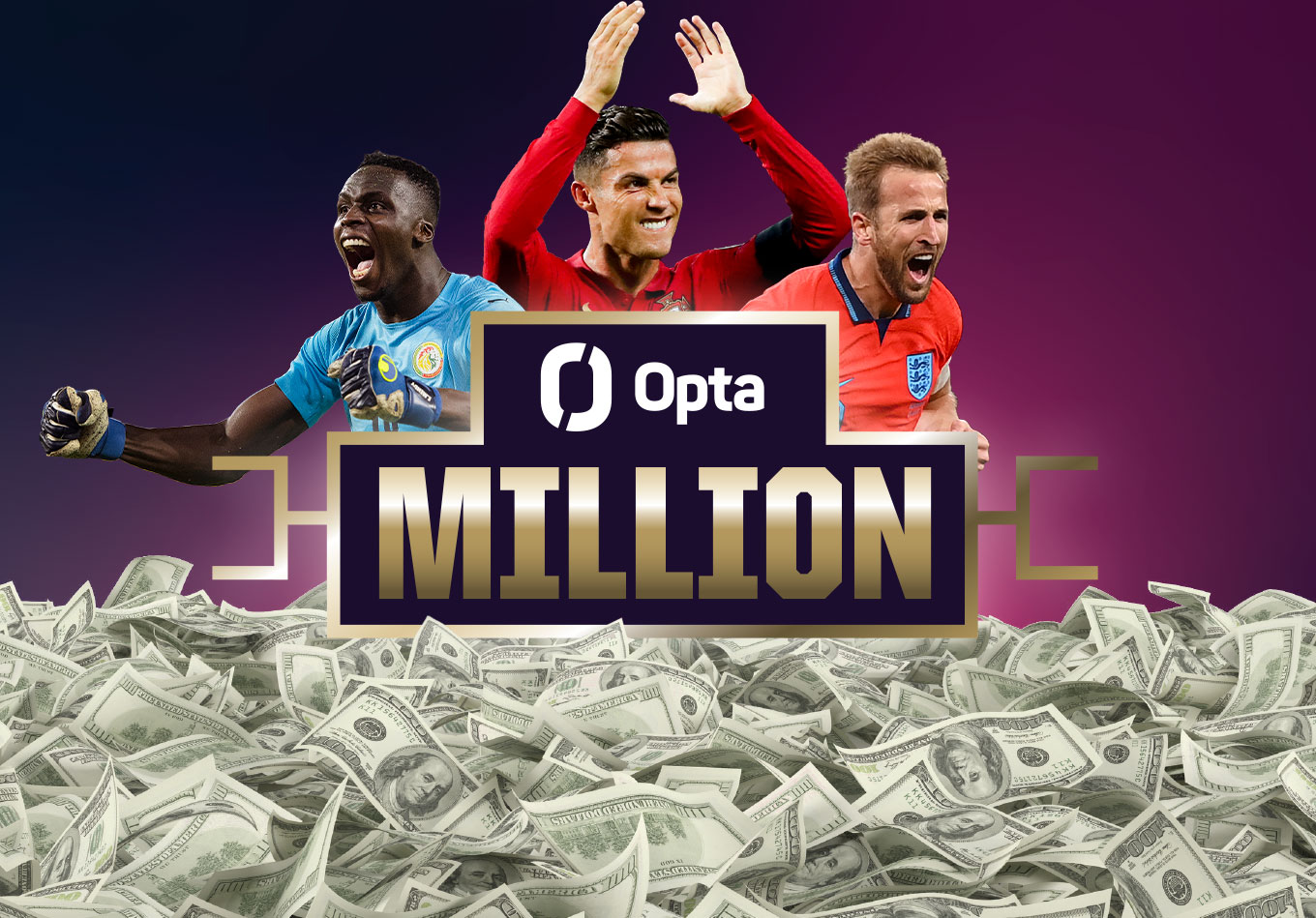 Destiny is in your hands. Play the Opta Million, predict your bracket correctly and you could win $1 million. To give you an idea of how you could fill out your Opta Million bracket, Aaron Barton takes us through his own predictions about what he expects will happen at the 2022 World Cup in Qatar.

The Group Stage exit. Every manager, player and supporters’ worst nightmare. The build up to a FIFA World Cup is long and drawn out, with qualification matches kicking off as early as two years before the competition starts. Yet for 16 teams their World Cup hopes and dreams will be over after just three matches.

In the same tournament over in Group D, who can forget Italy and England crashing out at the first hurdle, with Costa Rica going on to top the group with Uruguay finishing runners up. In Group G, Portugal also headed home after finishing third behind Germany and the United States.

Let’s see who I believe will be booking their tickets to the knockouts and who is catching an early flight home.

Portugal come into this tournament in a rather peculiar state. Fernando Santos’ ultra-talented side missed out on direct qualification and had to go through the World Cup play-offs, beating surprise finalists North Macedonia after they knocked out Italy in the semi-finals.

With a generation as stacked as Portugal’s, the expectations should be sky high for A Seleção, but with injuries to the likes of Diogo Jota and Pedro Neto, as well as many players coming into the tournament in poor form or in the case of Cristiano Ronaldo, with barely any minutes at club level, and with Fernando Santos’ conservative tactics, I expect Portugal to start slow and struggle in the group but as their form picks up they will do just enough to finish in second place behind Uruguay.

Canada head to Qatar for only their second ever FIFA World Cup, 36 years after their last appearance at football’s biggest party.

The Canadians topped their CONCACAF World Cup qualifying group, finishing above the likes of Mexico, USA and Costa Rica. John Herdman’s side guaranteed their place at the World Cup after beating Jamaica 4-0 in Toronto, sparking pandemonium in the crowds at BMO field.

Les Rouges have a squad that’s more than capable of causing an upset in Group H. They will travel to the tournament with the likes of Lille striker Jonathan David, Bayern Munich’s Alphonso Davies and former Portugal U21 international Stephen Eustáquio, who has settled in well at FC Porto since his move from Pacos de Ferreira.

Argentina come into the 2022 World Cup in scintillating form, and I expect this form to carry on throughout the group stage where I expect them to win all three of their matches

They last tasted defeat way back in June 2019 at the hands of Brazil, but since then they have gone on an unbeaten streak lasting 35 games, winning 26 of those including a 1-0 win in the Copa America final vs. Brazil and a 3-0 demolition of Italy in the Finalissima.

Lionel Messi has been in sensational form so far this season for Paris Saint-Germain, creating chances and scoring goals aplenty both in Ligue 1 and in the UEFA Champions League. He is playing with more confidence and that is excellent news for Lionel Scaloni and the Argentina team.

Another South American side I expect to progress from their group with relative ease is Brazil.

Like Argentina, they come into the tournament in superb form and are scoring goals thanks to their attacking depth. Across their last seven games, they have won all seven with a combined scoreline of 26-3.

At club level Brazil have several superstars who are in red hot form. Vinícius Júnior and Rodrygo at Real Madrid are both enjoying superb seasons, Neymar has a whopping nine goals and seven assists in 11 Ligue 1 games for Paris Saint-Germain and in the Premier League, Arsenal’s Gabriel Jesus and Liverpool’s Roberto Firmino are the joint-top and top scorers for their respective clubs in the league.

Brazil may have only made it past the quarter-finals once since 2002, but there is a real sense that this year they could become the Hexacampeão by lifting their sixth FIFA World Cup trophy.

This round of 16 throws up some pretty interesting ties, England square off against Senegal, Belgium take on Germany but the pick of the fixtures is Portugal vs. Brazil.

After struggling in Group H, Portugal will go on to knock Brazil out thanks to a hard-fought, defensively resolute performance where Santos’ men play largely on the counter-attack, always looking to catch Brazil cold. To add a bit of extra spice, this could be a fixture that sees Portugal field up to three Brazilians in Pepe, Otávio and Matheus Nunes. Portugal will square off against Iberian rivals Spain in the quarter-finals.

England will crash out in the first knockout round, losing to Senegal who are the only African team remaining in the competition. I can see the defending AFCON champions playing with no fear and attacking a nervous England from the off and ultimately getting the win to set up a quarter-final with France.

Germany will advance to the quarter-finals thanks to a slender victory against Belgium. I can see the wide players of Germany finding time and space in behind Belgium’s wing-backs again and again again. Germany will take on Uruguay, who eliminated Serbia in the Round of 16.

It will be heartbreak for Portugal as they are eliminated by Spain. Much like the recent UEFA Nations League game, Portugal will fail to take the game to Spain, instead remaining happy to keep the game at 0-0 before committing men late on. However much like in the last encounter, Portugal will be punished. It’s a gameplan and a match narrative that is becoming all too familiar for the Portuguese.

Senegal will pull off an almighty shock by knocking out defending champions France and become the first ever African team to reach the World Cup semi-finals. Sadio Mane leads his team to glory with one of the greatest individual World Cup performances.

Argentina will have enough to get past Netherlands in this quarter-final clash, I see them scoring early and then managing the game expertly.

Germany will find a way past a resilient Uruguay on penalties to book their ticket to the semi-finals. I actually see Germany as being one of the lowest-scoring team to make the semi-finals and on this occasion, they required penalties following a 0-0 draw. For the German supporters, it’s a welcome return to good World Cup form following their horrendous performance in 2018 where they were dumped out in the group stages after losing to Mexico and South Korea.

I see the match between Argentina and Spain being a cagey, tactical affair with both sides reluctant to put themselves in a position where they could make a mistake. Spain have youthful energy in the midfield but will fail to create the killer chance they need and the match will go to penalties. Argentina will score every single spot-kick to fire themselves into the final, making it two final appearances in the last three tournaments.

Germany send Senegal crashing out and end their hopes of being the first African team to reach a World Cup final. Senegal fight with heart and bravery but Germany ruthlessly pick them off in the second-half, winning the game 3-1 to set up a showdown with Argentina.

We have a repeat of the 2014 World Cup final, where Mario Gotze’s 113th-minute winner saw Germany crowned champions for a fourth time.

This is the ninth World Cup final appearance for Germany, having previously won four and lost four of their finals.

Incredibly, the two sides have squared off seven times in the World Cup, with Argentina winning on just one occasion.

My World Cup prediction ends with Argentina lifting the World Cup trophy for the first time since 1986. Argentina’s match winner comes in the form of Ángel Di María, who was touch and go before the competition as whether he would even make it to Qatar following a hamstring injury. His winning goal in extra-time is the difference on the night.