The Longest Winning and Losing Streaks in NFL History | The Analyst 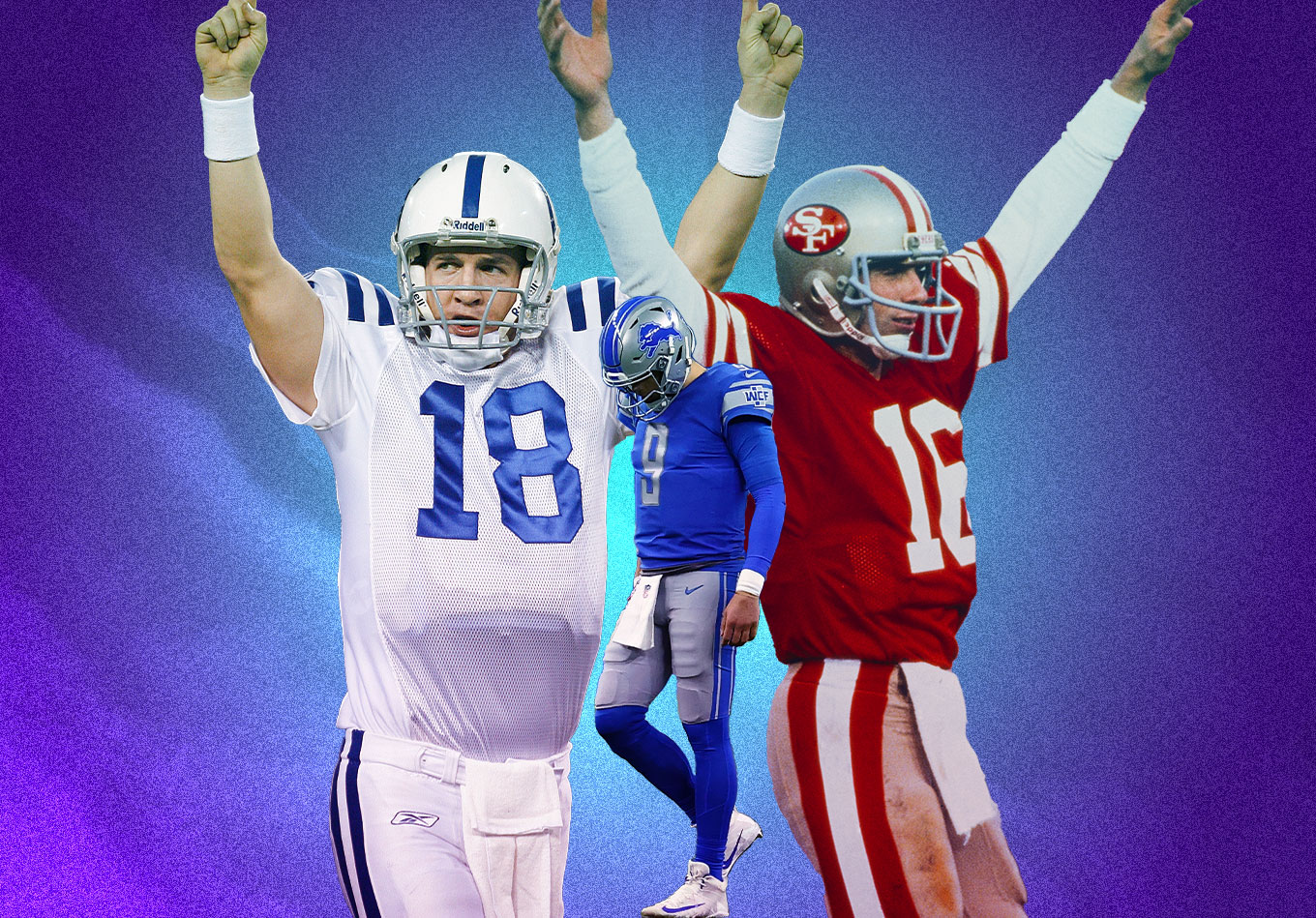 The Longest Winning and Losing Streaks in NFL History

Because of the short season, every NFL game feels like an event.

A win and the whole week feels like a triumph. A loss and everything is miserable for seven days.

So, it stands to reason that streaks in the NFL, of either the winning or losing variety, feel like a much bigger deal than in other sports. All it takes is a few games in a row going the same way to feel absolutely certain about a team’s destiny. And the streaks that are even longer than that? Fans never forget those.

What about the longest winning and losing streaks in the Super Bowl? The San Francisco 49ers hold the record for the most consecutive Super Bowl wins with five straight between 1982-95. The Pittsburgh Steelers have the second-longest run with four straight wins between 1975-80.

There’s been a lot of heartache for the Minnesota Vikings, Buffalo Bills and Denver Broncos, who all have suffered four-game skids in the Big Game. The Broncos snapped their streak against the Green Bay Packers in January of 1998, while the Vikings and Bills are still trying. The Cincinnati Bengals have dropped three straight Super Bowl appearances.

We’re highlighting some of the longest streaks in NFL history. If you’re a fan of one of these teams, chances are you’ll remember the happy/sad times. All win streaks are regular-season games only unless otherwise stated.

The 2008 Colts didn’t start the season the way a Peyton Manning team normally does, going 3-4 through seven games. But Manning helped right the ship en route to his third-career MVP award, and the team finished the regular season winning nine straight. That momentum didn’t carry into the playoffs, however, as the Colts were upset by the San Diego Chargers, who hosted the game and were the higher seed because they won their division.

The Colts would not have a slow start the next year, winning 14 straight games to open the 2009 season before head coach Jim Caldwell decided to pull his starters in Week 16 in the third quarter with a one-score lead to preserve them for the playoffs. The Colts would drop the season finale as well, but showed no rust early in the playoffs, making it to the franchise’s fourth Super Bowl (two as the Baltimore Colts) before losing to the New Orleans Saints 31-17.

Everyone knows the Dolphins went undefeated in 1972, and the players on that team like to remind everyone of it every year when the final undefeated NFL team loses its first game. But not too many people know the Dolphins went almost four full seasons without a home loss.

It started in 1971, when the Dolphins lost their first home game 14-10 to the New York Jets before rattling off six straight home wins to close out the regular season. It lasted through three full seasons after that, with the team losing a combined six regular-season games from 1972-74 – but none of them at home. The streak didn’t make it past the opening game in 1975, however, as the Oakland Raiders went into Miami and won 31-21 to end the remarkable streak.

The most impressive thing about the 49ers winning 18 straight road games might be that it was very close to being 31 straight road wins.

San Francisco suffered two road losses to the Chicago Bears and Phoenix Cardinals by a combined two points in 1988. Had they managed to win those two games, the streak would’ve been 13 games longer going back to 1987.

As it stands, it was still a very impressive streak by one of the league’s premier dynasties. The 49ers won the Super Bowl in both 1988 and 1989 and made it through both 1989 and 1990 without a road loss. Like the Dolphins, though, the streak was ended on opening day, as they lost 16-14 on the road against the New York Giants – the team that beat them in the playoffs the year before.

We’ve seen some North American expansion teams hit the ground running in recent years. The Vegas Golden Knights reached the Stanley Cup Final in their first season. The Tampa Bay Buccaneers did not have that experience when they first started in the NFL.

In their debut year, the Bucs became the first team to go winless in a 14-game season, a feat since passed by the 2008 Detroit Lions and 2017 Cleveland Browns going 0-16. Then, in 1977, the Bucs lost their first 14 games for an astronomical 26 straight defeats. They won the final two games of the season, providing a feel-good end to a 2-14 season.

Long home losing streaks might be even more painful than overall ones since they occur in front of the home fans. And a couple of teams left their fans disappointed 14 times in a row.

The Cowboys of the 1990s were an elite franchise, but the end of the ‘80s wasn’t as fun. The 1988 Cowboys started the season 2-2 but lost 11 of their final 12 games, including six straight on the road. In February of 1989, Jerry Jones purchased the team, but immediate success didn’t follow, as the team went 1-15 with its only win on the road. The team broke the dubious streak in its first game of 1990, pulling out a 17-14 win over the Chargers, and would go on to win three Super Bowls in the decade.

The 2008 Rams lost their final 10 contests – including five consecutive games at home – to finish a 2-14 season. Like the Cowboys in 1989, the team followed that up with a 1-15 season that featured the lone win on the road in 2009. The Rams also lost the home opener to the Arizona Cardinals in 2010, before finally notching a 30-16 home win against Washington in Week 3. The team actually won the next three home games as well and finished the season 5-3 in St. Louis, so the fans finally had a reason to cheer.

As expected, the longest road losing streak is longer than the home one.

The 2007 Lions were actually a respectable team that went 7-9, but they lost four straight road games to end the year. In 2008, the team was not respectable, as they were the first team to go 0-16 in NFL history. The 2009 Lions weren’t much better, going 2-14 with both wins at home. The 2010 Lions lost their first six road games before Drew Stanton led the charge in a dramatic 23-20 victory at Tampa Bay. Dave Raynor hit a field goal to tie the game as time expired in regulation, then hit another one in overtime for the win.

It’s not surprising to find Tom Brady, Bill Belichick and the Patriots on top of a postseason success leaderboard.

The first three wins came in an improbable Super Bowl run in the playoffs following the 2001 season that ended with an upset of the Rams. The team missed the playoffs at 9-7 the next year, but was back to their Super Bowl-winning ways in the 2003 season, culminating in a 32-29 Super Bowl victory over the Carolina Panthers. The team defended its title the following season by beating the Philadelphia Eagles 24-21 in the Super Bowl. The following year started with another easy playoff win, knocking off the Jacksonville Jaguars 28-3 in the AFC wild-card game. Then, at long last, Brady tasted defeat in the playoffs, falling 27-13 to the Denver Broncos in the divisional round. Don’t feel too bad for him, though, things turned out alright. He’s helped the Pats beat the Seattle Seahawks, Atlanta Falcons and Los Angeles Rams for three more titles.

We end with the only active streak on the list.

1991 was a good season for the Lions. The team went 12-4 in the regular season and crushed Dallas 38-6 in the divisional round to win its first playoff game since 1957. Even after losing to Washington 41-10 in the NFC championship game, it seemed like things were on the upswing for the Lions.

But that Washington loss started off a streak of nine losses that have spanned 30 years and counting. To make matters worse for the Detroit faithful, its quarterback for a good portion of this streak was Matthew Stafford, who went 0-3 in the playoffs in his 12-year career with the team. Of course, he won a Super Bowl in his first year after being traded to the Rams.

The Lions are in the middle of another rebuild but hope to be back in the playoffs sooner rather than later. Whenever they get there, they’ll have a 30-plus-year-old monkey to get off their back.