Giant in the Middle: How Ageless Brook Lopez is Anchoring the Bucks' Top-Ranked Defense | The Analyst 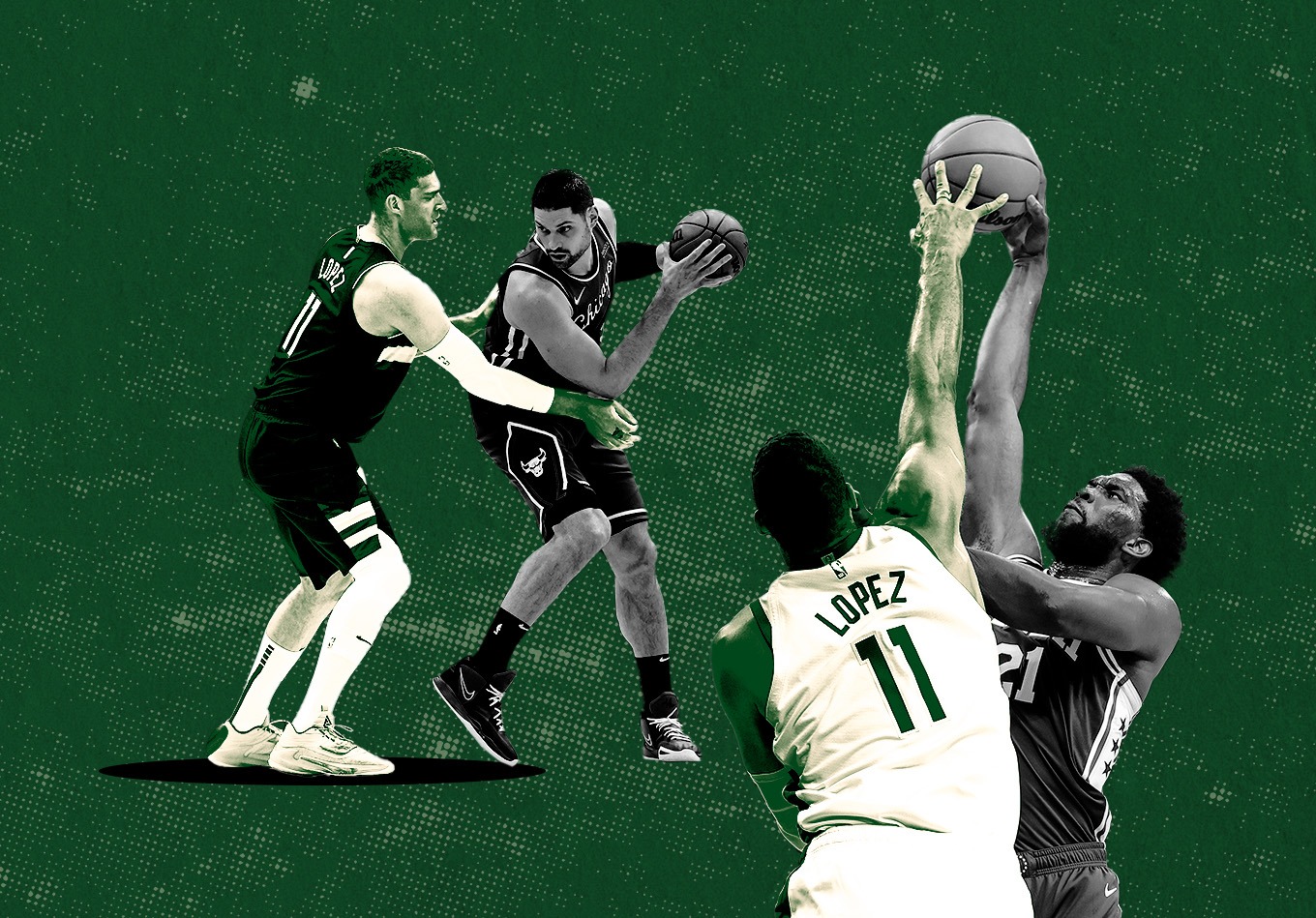 Giant in the Middle: How Ageless Brook Lopez is Anchoring the Bucks’ Top-Ranked Defense

Two weeks into the NBA season, the Milwaukee Bucks tout both the oldest roster in the NBA and the best defense.

We know what you are thinking: How does that work? I thought that to have a great defense, you needed young, athletic personnel?

According to Stephen Shea’s book “Basketball Analytics: Spatial Tracking,” the strongest indicator of defensive rating is opponent rim field goal percentage (i.e., rim protection). And in that same text, he also identifies block rates as a variable that correlates with rim protection.

With that in mind, here’s a look at the league leaders in blocks percentage (BLK%):

Notice anything interesting? It looks like Milwaukee’s Brook Lopez is not only near the top of the list, but also the only player in the top 10 over the age of 30.

In a way, Lopez symbolizes the success this aging core is experiencing on that end of the floor. Like a plain black t-shirt, his style is timeless. He anchors this elite defense with a brand of rim protection predicated on the execution of scheme, institutional knowledge, and sound shot-blocking technique.

“Our team is definitely the best defensive team in the NBA,” Lopez told reporters Monday after the Bucks’ 110-108 victory over the Detroit Pistons. “That’s something we can do every night, regardless of how we’re shooting.”

Do you know how they say the best ability is availability? Well, Lopez is a great paint protector in part because he’s almost always available to contest shots at the rim.

For their base ball-screen coverage, the Bucks, the NBA’s last unbeaten team at 6-0, deploy a deep drop scheme that enables their bigs to hover well below the level of the screen. This strategy (unlike more aggressive tactics like hedging or blitzing) allows Lopez to sink in near the basket and keep the play in front of him.

This alignment also gives him the chance to anticipate and stall his opponents’ forays to the hoop:

Lopez does a great job of maintaining a watchful eye and active hands when he’s backpedaling. In the second sequence of that montage, he immediately recognizes Jalen Brunson’s intentions to throw a lob and tips his pass before Mitchell Robinson can perform a thunderous jam.

And while Lopez is an incredible drop defender in his own right, credit is also due to the Bucks’ perimeter defenders for their ability to navigate screens swiftly and mitigate the number of 2-on-1 situations their big faces in the pick-and-roll.

And on the odd chance Lopez does find himself in an unfavorable situation, he’s got one of the premier off-ball defenders in the world in Giannis Antetokounmpo roaming around on the backline (he’s currently fourth in defensive DRIP, which projects a player’s contribution to team plus-minus per 100 possessions on defense).

Milwaukee’s system definitely helps, but 15 years in the NBA has also taught Lopez some additional tricks for optimizing his time in the interior.

One of his tools is his ability to quite literally tiptoe the line that is the 2.9 position. For those unaware, it is illegal for a defender to hang out in the paint for more than three seconds at a time (unless they are guarding someone), and doing so will result in a free throw and possession for the opposition. This infraction is known as a defensive three-second violation.

However, a player can “reset” this three-second time by simply stepping out of the paint for a moment before quickly venturing back in. Lopez understands this dance and regularly leans on this gimmick to maintain close proximity to the rim.

The second stratagem demonstrated in the visual above is known as the “tag.” Along with resetting when you step outside the paint, the three-second clock also restarts when you touch (or “tag”) a nearby defender. In the video example above, Lopez executes a tag on Isaiah Stewart so that he can stay inside long enough to send Bojan Bogdanović’s shot back into the spacetime continuum.

“(Lopez) pushes the boundary on that rule time and time again,” Van Gundy observed during the ESPN broadcast. “And I think even when he gets called for the occasional defensive three-seconds, they’re not going to keep calling it. It’s not like you see seven (calls) in a game.”

“They get the one out of the way…then he can do the same thing over and over the rest of the game.”

Van Gundy knows that for entertainment purposes, the referees can’t call Lopez for this infraction every single possession because it would bog down the flow of the game. So, he purposefully camps inside longer than legally eligible because he won’t always be punished for his actions.

Here is an example from that very game Van Gundy was calling:

Pay attention to the shot clock on this possession. It starts at 17 seconds, and yet, it doesn’t look like Lopez was actually guarding anyone at/near the paint until around the 13-second mark. That’s roughly four seconds!

It was only the second quarter, and Lopez had already been whistled for multiple defensive three-second calls. But that didn’t stop him. He knew the referees would not call the violation every single time, and he was able to alter two high-value shots because of it.

Lopez has a league-high 3.3 blocks per game for a Milwaukee team that leads the NBA in scoring defense (103.8) and field-goal percentage defense (.423).

The reason his defensive prowess has aged more gracefully than some of his younger contemporaries (like Anthony Davis) is that he hardly ever leaves his feet. As we know, the more chances you take going airborne, the more likely you are to experience a crash landing.

Like the metronomic Tim Duncan once did, Lopez provides elite ground-bound rim protection by locating the ball while it is still (relatively) low to avoid damaging collisions in the sky:

Speaking of Duncan, in 2014-15 (his age-38 season), he was the keystone to a San Antonio Spurs defense that placed second in our adjusted defensive rating metric.

Coming into this year, some feared that the aging Lopez would be a strong candidate for regression, especially coming off a season in which he missed 69 games due to a serious back injury.

However, because of his ageless skill set, Lopez has defied conventional wisdom and returned to claim his mantle as one of the premier rim guardians in the association.

And thanks to his lofty contributions, this Milwaukee defense seems impenetrable.