In addition, Gardner-Webb earned FCS National Team of the Week.

Hess set the Ohio Valley Conference single-game rushing record with 317 yards and scored four touchdowns in Southeast Missouri’s 52-22 win over Murray State. He averaged 12.2 yards on 26 carries, scoring from 73, 43, 31 and 21 yards out, as the Redhawks clinched a share of the conference title. He also caught one pass for 10 yards.

Shaeffer became the first defensive MVP since 2010 in college football’s most-played series, helping Lafayette beat Lehigh 14-11 in the Patriot League. Shaeffer scored on a 50-yard pick-six in the first quarter, later recovered a muffed punt and had eight tackles and two quarterback hurries as the Leopards extended their all-time series lead to 81-72-5 over 158 meetings.

Williams scored on a kickoff return of 100 yards for the fourth time this season as part of Weber State’s 33-31 win at Northern Arizona. The Big Sky’s new single-season record for kickoff return touchdowns in a season doubles the most by any other NCAA player (all divisions) this year. Williams finished with 198 yards on five returns, a 39.6-yard average. For the season, he is averaging 45.4 yards on 16 returns, a pace of more than six yards above the FCS single-season record.

O’Neill proved to be a nightmare for Sacred Heart’s offense, collecting a game-high 14 tackles, 5.5 tackles for loss and 3.5 sacks while also forcing a fumble in LIU’s 37-34 victory – the Sharks’ fourth straight to end the Northeast Conference season. The tackles behind the line of scrimmage totaled 20 yards. The fumble occurred on a sack that ended Sacred Heart’s final drive near midfield with just under two minutes remaining.

In a de facto Big South championship game, the Runnin’ Bulldogs secured their first conference title since 2003 and first-ever bid to the FCS playoffs. Coach Tre Lamb’s squad reversed a 14-10 deficit with 17 straight points over a 9-minute, 15-second span of the second and third quarters. Narii Gaither and Jayden Brown combined to rush for 200 yards and four touchdowns, while linebacker William McRainey and cornerback Raequan Ousley were defensive standouts. 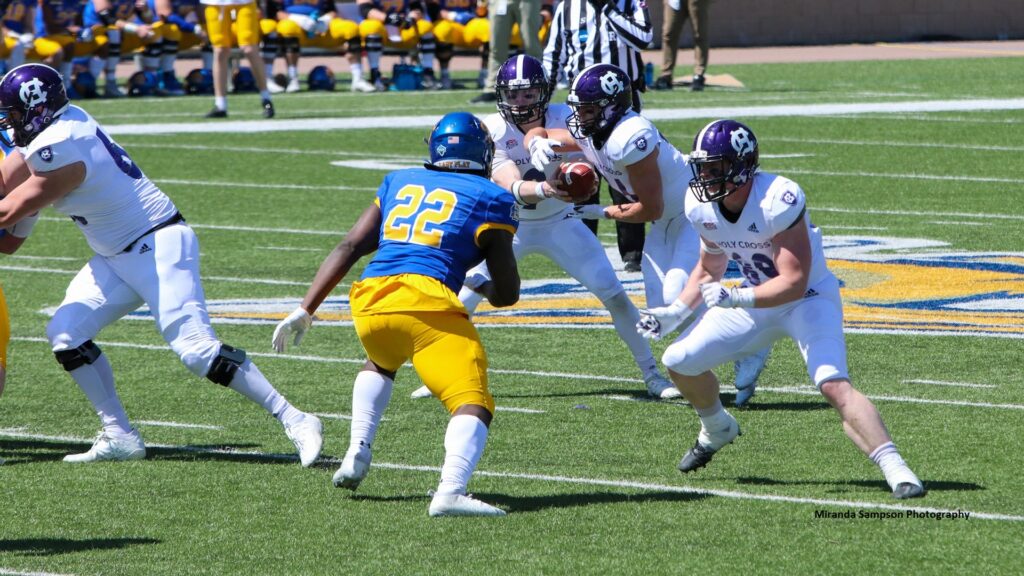