Germany vs. Japan: Prediction and Preview | The Analyst 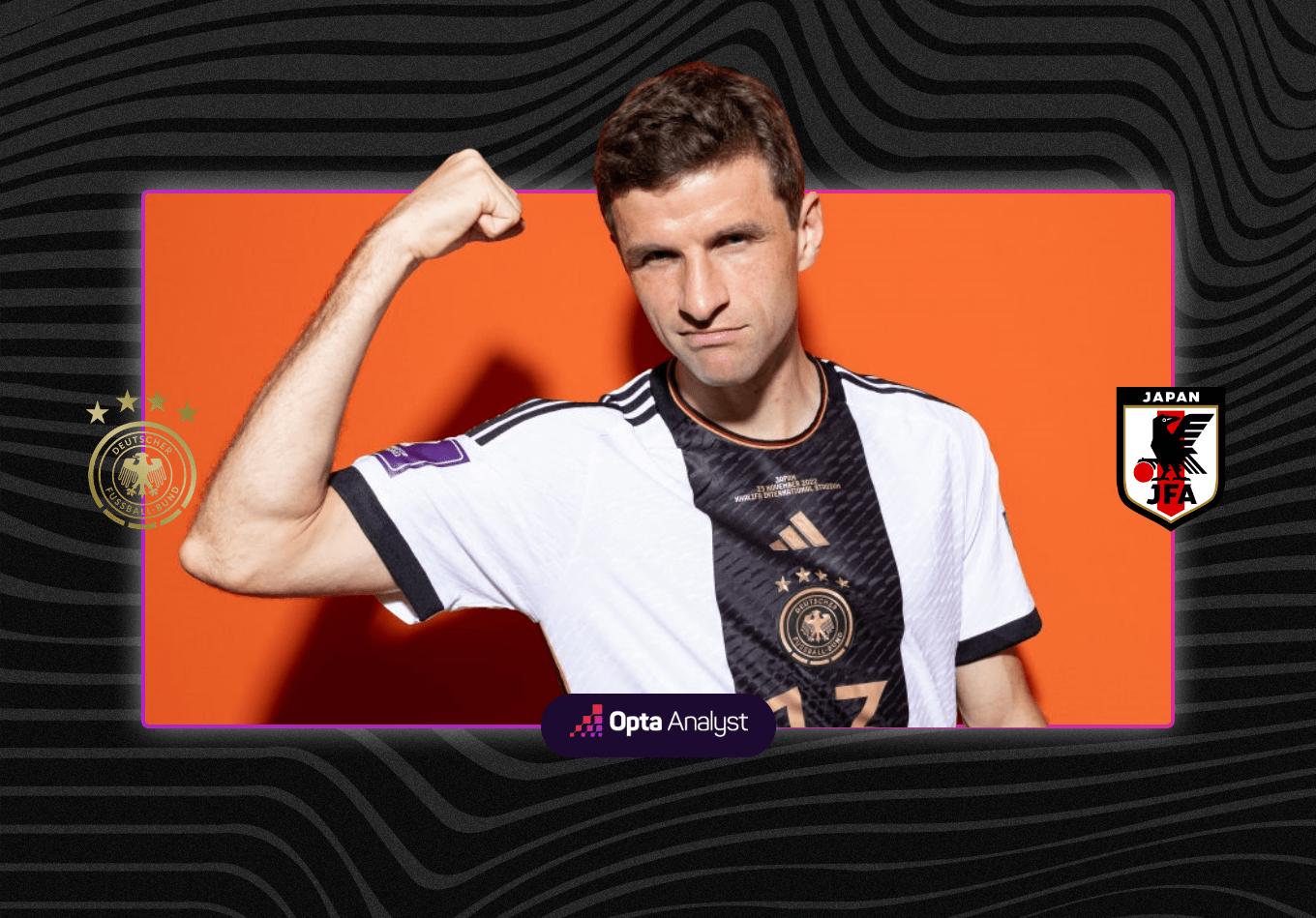 Germany vs. Japan: Prediction and Preview

We preview the 2022 World Cup match between Germany and Japan, including our pre-match prediction for each team’s opening game in Group E.

Play the Opta Challenge for Germany vs. Japan now for a chance to win $500

Germany are not used to World Cup failures and do not intend to reflect on their Russia 2018 experience as they prepare to begin their 2022 campaign against Japan.

Die Mannschaft are four-time world champions and have reached at least the semi-finals at four of the five tournaments since the start of this century – more than any other nation over this period.

But the exception came four years ago as Germany – then the holders – exited in the group stage, losing to Mexico and South Korea.

It was the first time since 1950, when Germany were last absent from the World Cup, that they had failed to progress beyond the first round.

Defender Niklas Sule’s only finals appearance to date was in that 2-0 reverse against South Korea, and it is not an experience he is particularly keen to revisit.

“It doesn’t matter anymore,” he told the media.

“We are in a fast-paced society where there is no time for success and failure. I also explicitly mention the successes. What happened yesterday no longer interests anyone.”

Germany have been drawn into a tough group that includes Spain and Costa Rica as well as Japan, but they rebounded impressively in qualification.

After hosts Qatar, Hansi Flick’s side were the first to book their place at the finals, with only England (39) scoring more goals in the European qualifiers (36).

“We have the quality to go far,” World Cup debutant Jamal Musiala added. “We go in with the mindset to win the title. We believe in it and are all eager for it to start now.”

Opponents Japan have won only one of their last eight World Cup matches, although that sole victory – in their Russia opener against Colombia – was enough to take them through to the round of 16 last time out.

The Samurai Blue have plenty of experience on the global stage, appearing at a seventh straight finals, although they have never advanced to the second round at consecutive editions.

Thomas Muller has been Germany’s main man at recent World Cups, with his 10 goals and six assists in 16 appearances the most of any player since his finals debut in 2010. Only Miroslav Klose (16), Gerd Muller (14) and Jurgen Klinsmann (11) have more World Cup goals for them.

But Muller may no longer be a guaranteed starter under Flick, with Bayern Munich team-mate Musiala the face of this younger team.

The 19-year-old, who could have instead been playing for England in Qatar, is more than capable of picking up the mantle, having scored nine goals and assisted six more in the Bundesliga this season. His 15 goal involvements are the most of any teenager across Europe’s top five leagues.

Minamino, like Musiala, is in line for his World Cup debut, despite being named in Japan’s preliminary squad as long ago as Brazil 2014.

An underwhelming stint at Liverpool slowed the attacker’s progress at club level, and he has netted only a single goal for Monaco this season, having been limited to just 333 minutes in Ligue 1 across nine appearances.

However, for Japan, Minamino was the key man in qualification, scoring 10 goals and assisting four – form he will hope to carry into the finals.

This is the first meeting between Germany and Japan at a World Cup but Die Mannschaft are unbeaten across their two previous encounters in friendlies – and supercomputer’s prediction model expects them to maintain that record.

In his first game as a head coach at a major tournament, Flick is given a 65.4% chance of leading Germany to victory.

Japan are an outside 14.1% shot, while the draw is rated at 20.5% – a result Germany perhaps cannot afford with Spain still to play.