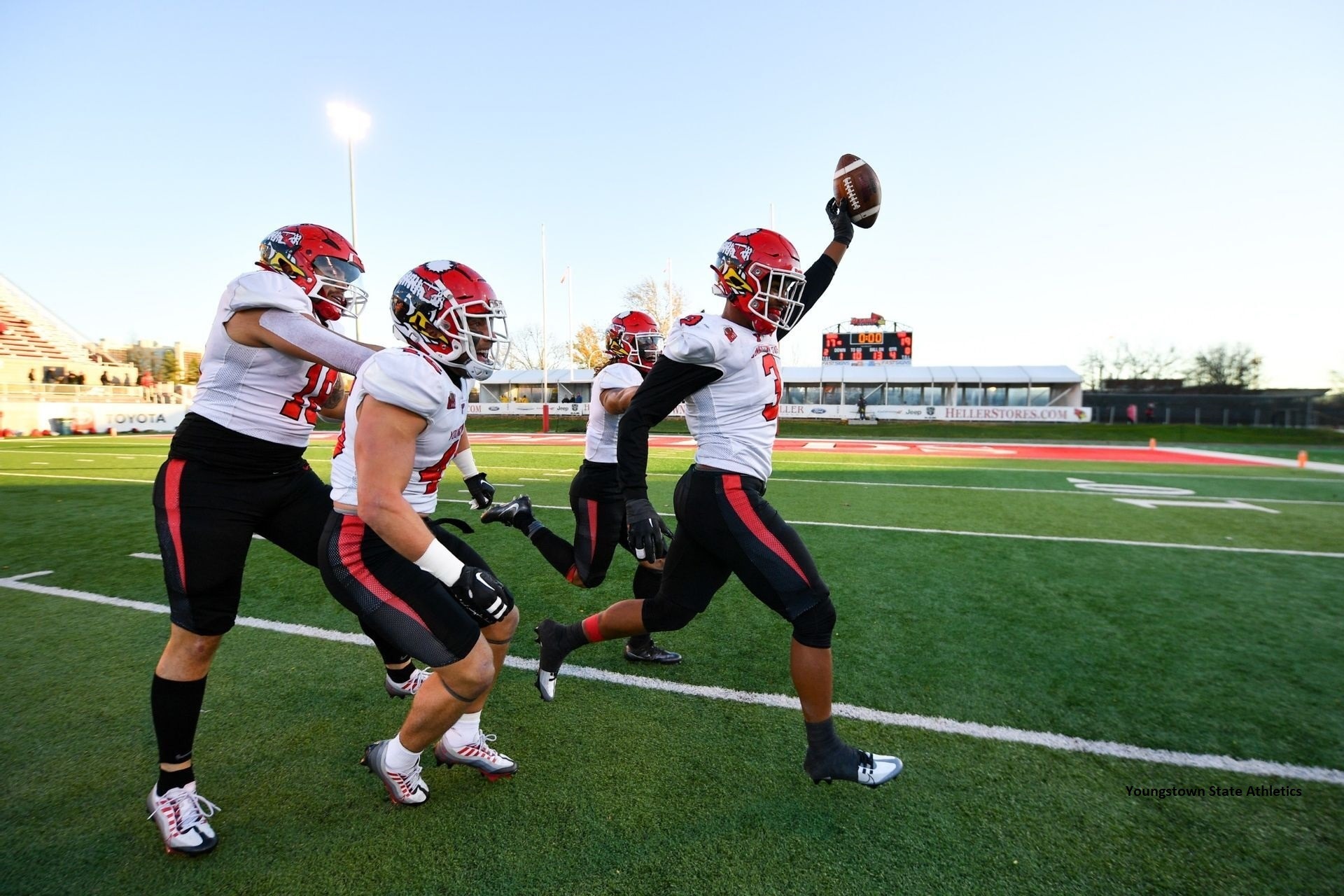 Three teams have qualified for the FCS playoffs already, but, oh, is there a lot to be decided in the final two full weeks of the regular season.

A number of conference title races are downright crowded – the way fans would want it in a potential November to remember.

In highlighting some of the bigger storylines of Week 10, here are seven takeaways:

Great Scott! He Did it Again

Entering the season – the 45th in FCS history – only two quarterbacks had passed for a record seven touchdowns in one half. UIW’s Lindsey Scott Jr. has now done it twice just four weeks apart. He spread his latest TD tosses to five receivers, going 15 of 20 for 319 yards, in a 70-point first half of the No. 7 Cardinals’ 73-20 rout of Houston Christian. He also had seven TDs in the first half of a Southland win over Lamar on Oct. 8. Overall this season, Scott has completed 216 of 292 passes for 3,409 yards and 45 TDs against four interceptions, with his 220.2 passer rating on pace to set an FCS single-season record.

Top-ranked South Dakota State and No. 6 Holy Cross both clinched at least a share of their conference title and automatic bids to the FCS playoffs – one week after Saint Francis was the first to reach the postseason. SDSU (9-1, 7-0) won 31-28 at Northern Iowa in the Missouri Valley Football Conference. Hunter Dustman’s 26-yard, walk-off field goal was the difference. Holy Cross (9-0, 5-0) handled Lehigh 42-14 to join the 1998-2001 Lehigh squads as the only ones to win four straight Patriot League titles. Quarterback Matthew Sluka accounted for 272 yards of total offense and two touchdowns.

(Stay up-to-date with the conference champions and postseason qualifiers)

In recent weeks, it’s appeared the MVFC, which has been the top-ranked FCS conference, could have fewer playoff qualifiers than other conferences such as the Big Sky, CAA and SoCon. Out of nowhere, though, Youngstown State has made itself a candidate. Once 2-3, the Penguins have won four straight conference games, including 19-17 at Illinois State. Mitch Davidson’s 12-yard touchdown pass to Bryce Oliver with five seconds left erased a 17-13 deficit and gave them their first lead of the game. Coach Doug Phillips’ team finishes the regular season at Missouri State and versus Southern Illinois – both reasonably winnable games – as it seeks just the program’s first playoff bid since 2016, when it was the national runner-up.

Just as it did in 2019, No. 2 Sacramento State has won three top-25 wins in a 15-day span. Actually, it was three top-15 wins this time after the Hornets (9-0, 6-0) held off No. 5 Weber State 33-30 for their 17th straight Big Sky win. It’s the second-longest Big Sky streak behind the 1999-2002 Montana teams that won 25 in a row. The Hornets never tailed in the FedEx Ground FCS Game of the Week, and quarterback Asher O’Hara ran for two touchdowns and passed for another. In defeat, Weber State’s Abraham Williams had a 100-yard kickoff return for a touchdown for the third time in the Wildcats’ last five games.

How Many CAA Teams Will Make the Playoffs?

Here’s how deep CAA Football is with playoff candidates this season: New Hampshire just lost its first conference game, 40-34 at Richmond, and next Saturday may be hosting Rhode Island in a playoff-elimination game. Yes, seriously. Reece Udinski threw for three touchdowns and No. 14 Richmond built a 24-0 lead while topping the No. 17 Wildcats 40-34 to create a three-way tie atop the standings, also with William & Mary. Six teams are at least 6-3 overall and 4-2 in the CAA, creating a fight to the finish.

Stock Up: In a season with some unlikely conference leaders, Northwestern State is right there as one of the bigger surprises. The Demons (4-5) are winless out of conference, but 4-0 in the Southland after winning 41-14 at Texas A&M-Commerce. Zachary Clement threw four touchdown passes, including one to wide receiver Zach Patterson, who also tied the FCS season high with 15 receptions. The Southland’s lone unbeaten needs to beat Southeastern Louisiana or UIW – a daunting task, of course – to claim at least a share of their first conference title since 2004.

Stock Down: Villanova earned a share of the CAA title last season, but key graduation losses have caught up to the Wildcats (5-4, 3-3) this year. They managed only 153 yards – their fewest in a game since a 2004 loss to James Madison – in a 27-3 loss to Towson. Six teams are ahead of the ‘Cats in the standings, meaning they’re going to have to sweep nationally ranked William & Mary and Delaware in the next two weeks to be in contention for an at-large playoff bid.

Who’s next to earn a postseason bid? Perhaps North Carolina Central with the MEAC’s bid to the Celebration Bowl. Quarterback Davius Richard (385 yards of total offense and five total touchdowns) powered the Eagles (7-2, 3-1) past Howard 50-21 and into first place. With a win over Norfolk State next Saturday, coach Trei Oliver’s team will be Atlanta-bound for the Dec. 17 bowl. … No. 9 Jackson State (9-0, 6-0) only needs to win one of its final two regular-season games to clinch a spot in the SWAC championship game. The SWAC winner also will go on to the Celebration Bowl. … The FCS quarterback play has been high this season with the likes of UIW’s Scott, Richmond’s Udinski, Fordham’s Tim DeMorat, Holy Cross’ Matthew Sluka and Jackson State’s Shedeur Sanders, but Samford’s Michael Hiers is on an incredible three-game run with an 84.7 completion percentage (105 of 124), including 30 of 38 for 322 yards and four touchdowns with one interception in a 34-15 victory over VMI. … Geno Hess became Southeast Missouri’s all-time rushing leader in the No. 22 Redhawks’ 42-0 shutout at Tennessee State in the Ohio Valley Conference. He had 18 carries for 136 yards and three touchdowns, raising his career totals to 3,475 yards and 44 scores on the ground. … Thursday night, Mississippi Valley State opened Week 10 with a 30-20 win over Alabama A&M in the SWAC – its first of the season. Jalani Eason returned from injury to pass for three touchdowns, and defensive back Jamison Lindsey had two interceptions and two pass breakups. … Yale (6-2) scored 52 points in the first half en route to a 69-17 rout of Brown. It was the most points by the Bulldogs since they beat Vermont 89-0 on Oct. 5, 1929, and the most by an Ivy League team since Harvard beat Columbia 69-0 on Nov. 3, 2012. … Caden Bell passed for a touchdown and a two-point conversion with 9:11 left and Columbia held on to edge Harvard 21-20 in a matchup of the FCS’ winningest active coach (Columbia’s Al Bagnoli, 267 wins) and the Ivy League’s all-time winningest coach (Harvard’s Tim Murphy, 191). … Idaho wide receiver Hayden Hatten caught four touchdowns in a 48-16 win over Eastern Washington, giving him 12 in his last five games. … Montana (6-3, 3-3) ended a three-game losing streak, beating Cal Poly in a snow-filled Big Sky game. The Grizzlies, who have scored in 430 straight games, set a program record with 37 first downs. … No walk-off field goal was more impressive than Luka Zurak’s 56-yard yarder that lifted Butler past San Diego 26-23 in the Pioneer Football League. While handing the Toreros a second consecutive league loss for the first time since 2010, Butler remained in a three-way tie for second with Davidson and Dayton (now at 700 wins in program history) – all 7-2 and 5-1 – behind St. Thomas (8-1, 6-0). … Bryant’s Ethan Gettman shared the weekly high with a 56-yard field goal against Campbell in the Bulldogs’ first-ever Big South win. … North Alabama fell 38-35 to Austin Peay in the ASUN, but the Lions’ ShunDerrick Powell (23 carries, 207 yards, 2 TDs) had his fourth 200-yard game of the season. Two other ASUN teams with huge wins: Eastern Kentucky topped Central Arkansas 42-14 behind Parker McKinney’s three TD passes and Kennesaw State won 44-27 at OVC co-leader UT Martin as defensive back Chance Gamble collected three of the Owls defense’s five interceptions, including an 89-yard pick-six on the game’s final play (UT Martin’s Rob Hicks also had an FCS season-high 26 tackles).