Cover 3: The Vikings Get Another Test, Plus Two Big Divisional Matchups to Watch in Week 11 | The Analyst 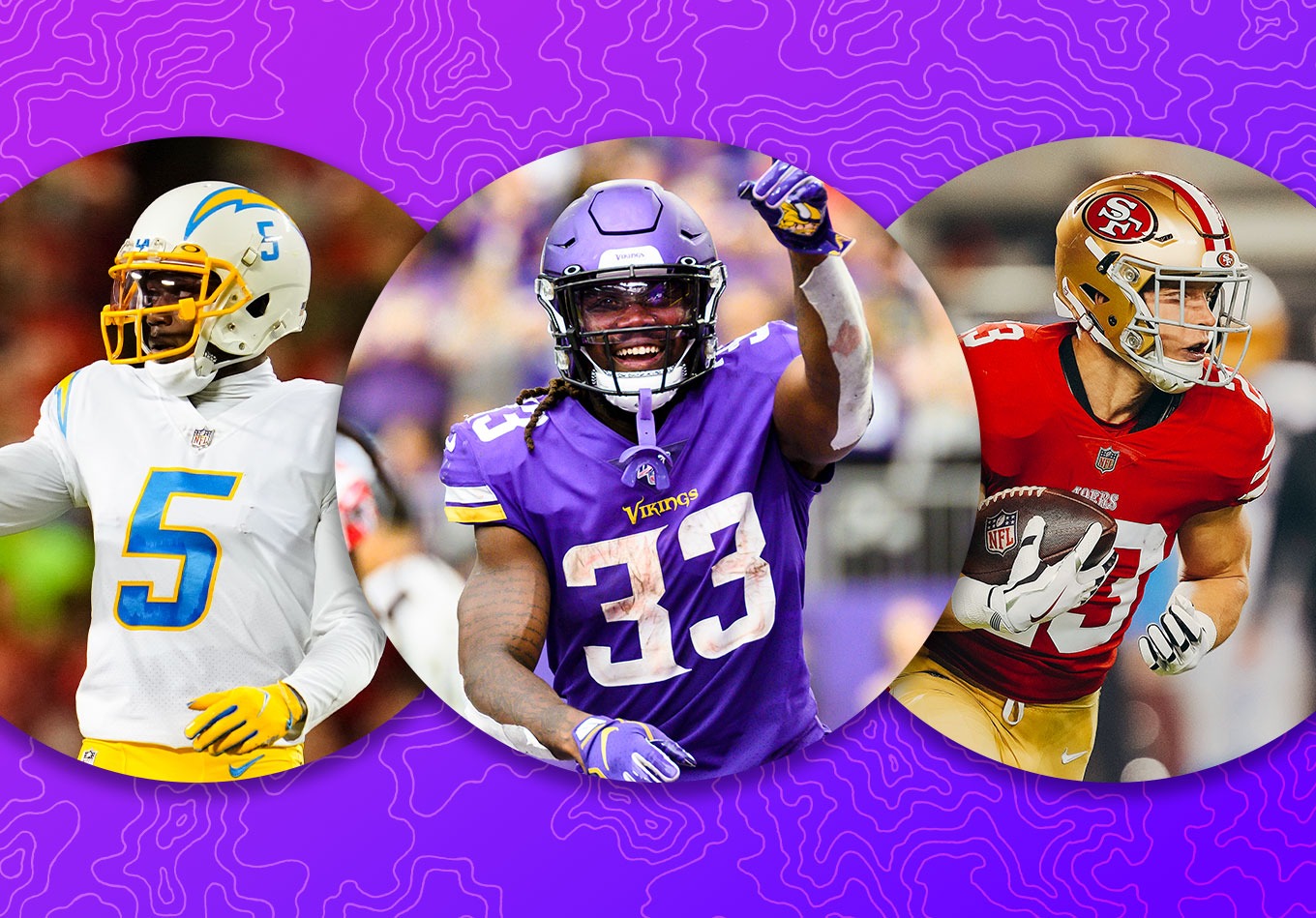 Cover 3: The Vikings Get Another Test, Plus Two Big Divisional Matchups to Watch in Week 11

That the Minnesota Vikings pulled off the most improbable of wins last week maybe shouldn’t come as all that much of a surprise.

They’ve been defying the odds all season long.

In a season that’s been as competitive as any the NFL has ever seen, the 8-1 Vikings share the league’s best record mainly because they’ve been the best in the business at winning close games. With its spellbinding 33-30 overtime victory over the suddenly baffling Bills in Buffalo this past Sunday, Minnesota joined the 2020 Kansas City Chiefs as the only teams in league history to win seven straight games that have each been decided by eight points or less.

The Vikings’ weekly Houdini acts have placed them in very rare territory – a team that’s won eight of its first nine games despite outscoring the opposition by just 35 points for the season. Only one team, the 1976 Oakland Raiders, has started 8-1 with a lesser point differential through nine games.

And although that John Madden-coached Raiders outfit went on to defeat the Vikings in the Super Bowl, history says this Minnesota squad may have a difficult time attaining championship glory. The 2022 Vikings have been given up 229 more total net yards than they’ve generated, joining a group of six others in the Super Bowl era to start 8-1 or better through nine games while having a negative margin in total yards.

As the chart below illustrates, none of those predecessors reached the Super Bowl at season’s end.

Still have your doubts? Well, apparently you’re not alone, as the Vikings will be taking the field this weekend as a home underdog against the Dallas Cowboys despite their glossy record. It’s one of three games SmartRatings views among the most intriguing on the Week 11 schedule.

Shortly after the Vikings overcame a 17-point second-half deficit in their miraculous comeback win in Buffalo, the Cowboys blew a 14-point fourth-quarter lead to the Packers and left Green Bay with a head-scratching 31-28 overtime loss that made their path to a potential NFC No. 1 seed a considerably bumpier one.

There were several breakdowns and missed opportunities that led to Dallas’ demise, but perhaps the most glaring – and concerning – problem is the defense’s recent ineptitude against the run.

The Cowboys have been league average in run disruption rate (68.4) and below it in rushing yards allowed before contact (3.1), and those deficiencies have been exploited in their two most recent games. Green Bay’s tandem of Aaron Jones and A.J. Dillon combined for 203 yards on 37 carries, one week after the Bears ripped off 240 rushing yards at 5.6 yards per pop on Dan Quinn’s unit.

While Chicago’s numbers were a bit inflated due to quarterback Justin Fields’ exceptional scrambling ability, there’s no denying that missed tackles have become a real issue for Dallas. Jones and Dillon forced a missed or broken tackle on 28.2% of their touches last week, while the Bears’ duo of David Montgomery and Khalil Herbert delivered similar results at 27.3%. For comparison’s sake, the league average this season is 20.6%.

Now the Cowboys must deal with one of the league’s most dangerous backs in open space in Minnesota’s Dalvin Cook, who has made defenders miss at a rate of 26.9% – sixth among players with 100 or more rush attempts this season.

Cook can be a boom-or-bust player, as 11.7% of his carries have resulted in negative yardage – the fourth-highest rate among backs with at least 100 attempts this season. He’s also fully capable of changing momentum with a single touch, like he did with a dazzling 81-yard touchdown run against the Bills that sparked the Vikings’ second-half comeback.

It’s imperative that the Vikings take advantage of a Dallas defense that’s allowed gains of 10-plus yards on 14.8% of opponent run plays (the fifth-worst rate in the NFL), as they could struggle if forced to take to the air too often.

Yes, Minnesota does possess an elite playmaker in Justin Jefferson, but the Cowboys can be awfully tough to throw on. Dallas owns the fourth-best burn-allowed rate at 43.0% and ranks fourth in defensive EVE against the pass.

The Micah Parsons-led pass rush also ranks seventh overall in pressure rate, while Minnesota’s offensive line stands just 27th in pressure rate allowed and may have to go without its best member if left tackle Christian Darrisaw can’t get cleared from a concussion he sustained against Buffalo.

This is a monumental game for the Chargers, as a Kansas City win would essentially sew up a seventh straight AFC West title for their division rivals. The Chiefs would have a three-game lead in the standings, a season sweep of their nearest competitor and the easiest remaining schedule in the league over the final seven weeks based on current records.

The Chargers have played the Chiefs awfully tough during coach Brandon Staley’s reign, including a 27-24 loss in Kansas City back in Week 2 when Chiefs rookie Jaylen Watson delivered the game’s pivotal play with a 99-yard interception return touchdown that broke a 17-all tie early in the fourth quarter.

That was a rather ironic outcome, considering Kansas City has registered a paltry three interceptions on the season and Chargers quarterback Justin Herbert owns the lowest pickable pass percentage of any quarterback with at least 100 attempts this season at 1.89%.

Herbert has done a fine job of limiting mistakes, though that low number can at least be partially attributed to him often having to play it safe due to the Chargers’ dearth of healthy talent at wide receiver. Keenan Allen and Mike Williams represent one of the NFL’s better combos, but they’ve been together for only parts of two of Los Angeles’ nine games this season due to injuries.

The Chargers have especially missed Allen, who’s barely been on the field as he tries to overcome a hamstring strain sustained in Week 1. The five-time Pro Bowler is as reliable as they come when available, as evidenced by an 84.1% open rate in 2021 that ranked sixth among wideouts with 100 or more targets.

With their No. 1 receiver largely absent, the Chargers rank 23rd in open percentage and 27th in burn percentage with Herbert constantly forced to use check-downs and dump-offs to running back Austin Ekeler. As a result, Herbert’s 6.4 yards per pass attempt is 31st among qualified quarterbacks, and that number has dipped to a microscopic 5.2 yards per attempt over Los Angeles’ past four games.

The good news is Allen is back practicing and may be able to return this week. Same goes for Williams, who’s missed the last two games with a high-ankle sprain. The physically imposing receiver was a big factor in the Week 2 matchup, hauling in eight of 10 targets for 113 yards and a touchdown even without Allen around to draw coverage away.

While the Chargers seem to be getting healthier at wide receiver, the Chiefs could enter Sunday’s clash without two of Patrick Mahomes’ top options with JuJu Smith-Schuster dealing with a concussion and Mecole Hardman placed on injured reserve. Both have been vital contributors to the third-ranked team in offensive EVE through the air, as Smith-Schuster’s 77.4% burn rate is tops among wide receivers with at least 50 targets and Hardman stands among the leaders in open rate (88.2%).

The Chiefs still have Marques Valdes-Scantling and arguably the NFL’s premier tight end in Travis Kelce, and newcomer Kadarius Toney has made an impact in limited duty, so the cupboard won’t be bare. Still, at least some improvisation will be required for Kansas City’s attack to operate at something close to its usually lethal level.

And don’t forget that the Chargers have defended KC pretty well during Staley’s tenure. Mahomes threw for just 235 yards and had only 31.4% of his completions go for first downs – both season lows – in the previous meeting. And although he didn’t have a turnover, Mahomes was charted with four pickable passes (a rate of 11.8%), which offers more support to the theory that the Chiefs may have been a bit fortunate to escape with a victory in September.

The NFL’s first game in Mexico City since 2019 may be without one of its star attractions as Cardinals quarterback Kyler Murray could miss a second straight week because of a hamstring injury. While that potential absence presumably shifts the balance of power even more in the direction of the heavily favored 49ers, Arizona’s offense has proven on a few occasions to be in good hands when backup Colt McCoy has had to step in.

McCoy is 3-1 as a starter since the start of last season with each of those victories coming against an NFC West opponent, and the well-traveled veteran was on point in leading the Cardinals to a 31-17 win at San Francisco last November. Over those four games, McCoy has completed 74.0% of his passes, turned the ball over just twice and produced an exceptional well-thrown percentage of 87.9.

Kliff Kingsbury clearly has full confidence in his No. 2 quarterback, and there seems to be a chance Arizona can have its dangerous receiver duo of DeAndre Hopkins and Marquise Brown together for the first time all season. Should Brown be cleared to return from a broken bone in his foot, the Cardinals certainly have the capability of improving upon their dreadful No. 31 offensive EVE ranking through the air regardless of who’s under center.

The Cardinals can win with McCoy, though that’s dependent on how their erratic defense performs, particularly in stopping the run.

In every one of Arizona’s four 2022 victories, it’s held the opposition under 100 rushing yards and less than 4.0 yards per attempt. Conversely, the defense has yielded 100 rushing yards or more and an average of 4.2 yards per carry or higher in each of the Cardinals’ six losses.

Sure, McCoy came through with a deadly efficient 22-of-26, 249-yard outing in last year’s meeting with San Francisco, but the Cardinals’ defensive efforts that day cannot be overlooked. The 49ers rushed 11 times for just 39 yards, their second-lowest single-game output on the ground in the six-year Kyle Shanahan era.

San Francisco’s rushing attack has been good but not necessarily dominant, but there’s reason to expect improvement over the season’s second half now that the underrated Elijah Mitchell is back from injury to pair with midseason pickup Christian McCaffrey.

Mitchell returned from a seven-game absence with power and purpose in the Niners’ win over the Chargers last week, accounting for 89 of the team’s 157 rushing yards and showing himself to be the more effective back than the more-heralded McCaffrey.

Nearly half of Mitchell’s yards came after being hit, an area where he also made a mark as a rookie in 2021. He averaged 2.27 yards after contact last season, the sixth highest of any running back with at least 100 rush attempts and well above the league average of 1.95.

Starting with that Week 9 loss to the McCoy-led Cardinals last season and including the 2021 playoffs, the 49ers are 12-1 when rushing for 105 yards or more and 2-7 when failing to hit that mark.