Brazil vs. Switzerland: Prediction and Preview | The Analyst 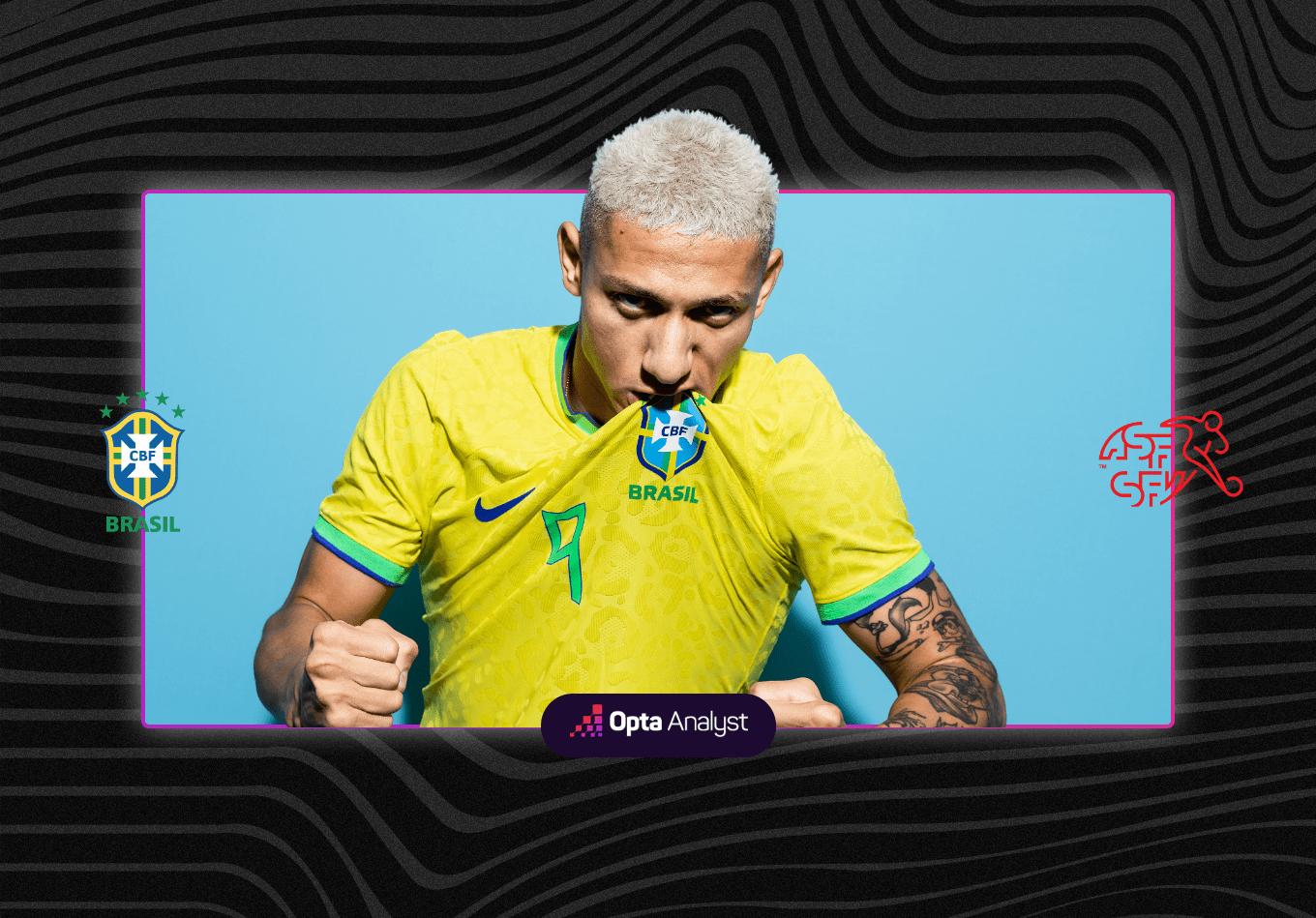 We preview the 2022 World Cup match between Brazil and Switzerland, including our pre-match prediction for each team’s second game in Group G.

Richarlison’s double lifted Brazil to a 2-0 win over Switzerland in their World Cup opener, and the striker believes God is on his side.

Richarlison believes God recognised his effort to get to the World Cup, as the Brazil forward turned his focus to Monday’s clash with Switzerland.

Tottenham attacker Richarlison scored both of the Selecao’s goals in their opening 2-0 win over Serbia on Thursday.

After bundling in a rebound, Richarlison scored the goal of the tournament so far to double Brazil’s tally, sending an acrobatic attempt into the left-hand corner.

Richarlison has scored nine goals in his last seven appearances for Brazil in all competitions, becoming the eighth Brazilian to score a brace on his World Cup debut, and first since Neymar in 2014.

Since his debut for the national side in September 2018, Richarlison has scored more goals in all competitions for Brazil than any other player (19).

However, his World Cup participation was in doubt when he suffered a calf injury while in action for Spurs against his former side Everton in October.

“A few weeks ago, I was crying, not sure if it would come,” Richarlison said, as quoted by the CBF’s official website.

“On the day of the exam, it was one of the longest days of my life. I remember it was a day off and I went for the exam, I stayed on the stretcher waiting for the result to come out.

“The doctors went back and forth, I got nervous and time went slowly.

“So, I think it was worth all the effort in my recovery. God saw my effort, saw how much I wanted to come to the World Cup.

“That’s it, now it’s time to continue. We did the main thing, which was to win the first game, which is very important. Now it’s time to think about the second game and rest well. It was the first, now there are six more important games.”

Play the Opta Challenge for Brazil vs. Switzerland now for a chance to win $500

Brazil are favourites to top Group G, but Switzerland will be no pushovers. They won their first match too, beating Cameroon 1-0 thanks to Breel Embolo’s goal.

Switzerland are looking to win their opening two games at a World Cup for the first time. They last won consecutive games in the competition in 2006 against Togo and South Korea.

Brazil will be without Neymar, however, with their talisman having suffered an ankle injury against Serbia that will see him miss the meeting with Switzerland, though coach Tite was confident the Paris Saint-Germain star will feature again in Qatar.

Richarlison rightly took the limelight for his efforts against Serbia, but he is not the only quality attacker Brazil have at their disposal.

With Neymar out, the onus will be on Vinicius Junior – who has shown his world-class ability at Real Madrid – to step up.

Before he was taken off inside the final 15 minutes of Thursday’s match, Vinicius had been involved of 50 per cent of Brazil’s 16 shots, having four attempts himself and creating as many chances, including the assist for Richarlison’s stunning second.

Embolo has scored in three of his last four matches for Switzerland, with all three of his strikes being the winner in each game.

The last Swiss player to score in consecutive World Cup games was Alexander Frei in 2006, while the only players to score in Switzerland’s first two games at a World Cup are Leopold Kielholz in 1934 and Andre Abegglen in 1938.

Brazil are unbeaten in their last 16 group stage games at the World Cup, and they are aiming to become the first team to go 17 without defeat in the group stages of the competition.

Opta’s model backs them to do just that, giving Brazil a 62.7 per cent chance of victory.

The probability of a draw is 21 per cent, while the supercomputer rates the likelihood of a Switzerland win at 16.3 per cent.