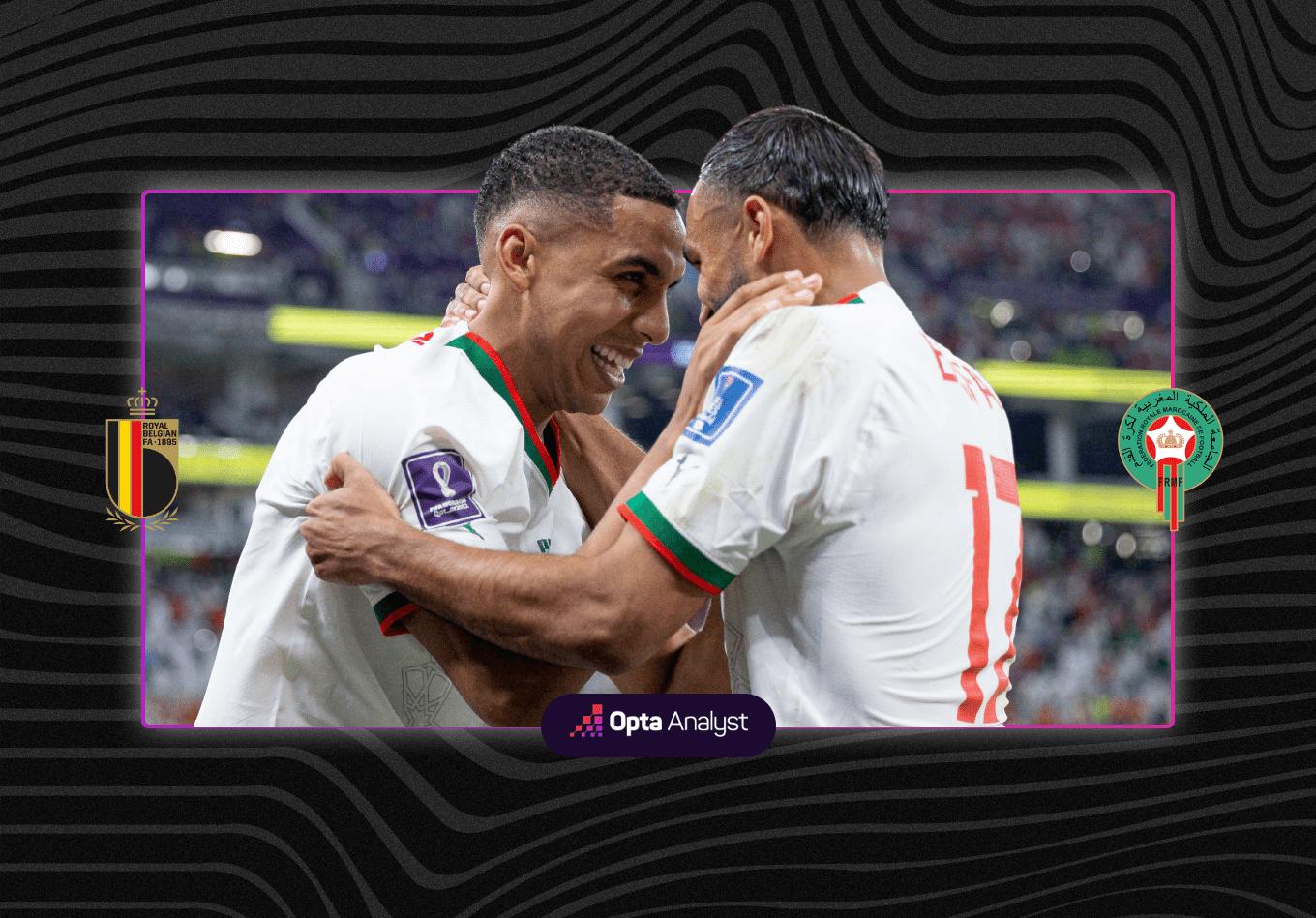 So far at Qatar 2022, over half of the matches played (14/26) have been goalless at half-time. Fortunately, nine of those have gone on to see a goal scored in the second half. Unfortunately for Belgium, this was one of them.

Just like in their opening match against the Canadians, Belgium were underwhelming. Unlike that game, they didn’t sneak away with the three points. Or even one.

It was another tepid display lacking in any pace or attacking momentum from the Belgian team. Overall at the 2022 tournament so far, just 12.5% of Belgium’s completed passes have ended in the final third of the pitch – that’s less than half Brazil’s average in their opening match (26.4%) and well below other tournament favourites like France (22.9%), Spain (21.5%) and Portugal (25.7%). Passing with purpose? Not this Belgian side.

The 2018 World Cup looked like the peak of this Belgian ‘golden generation,’ but four years later the two uninspiring performances so far have made the ‘olden generation’ look more apt.

Of the 26 World Cup matches so far in this tournament, only four of the 52 starting XIs have had an average age of 30 years or older, with Belgium the only team to do it twice. Granted, with three changes to their starting line-up today, Roberto Martinez’s side were younger than in game one’s lethargic display versus Canada (30 years, 181 days) but only by four days.

One of those players over 30 – 31-year-old Kevin De Bruyne – was unable to make an impact in this game. He was far from his best in the opening game versus the Canadians, but still walked away with the FIFA Player of the Match (not that he thought he’d deserved it).

He could only create a single chance for a team-mate in this match, despite attempting more than double the tally of passes in the final third of the pitch than any other player on either team (25). How much is that on De Bruyne? Well, without their best attacking option Romelu Lukaku at this tournament until his panicked introduction in the 81st minute of this match, Belgium’s threat in the box has been fairly non-existent.

Belgium have had 26 touches in the opposition box in their opening two matches – exactly a third the tally France have managed (78). Their expected goal total of 1.47 over two games is less than what Canada posted against them in the opening match, even without the penalty (1.85).

Ahead of Canada’s meeting with Croatia later today, this result flies Group F at the 2022 World Cup wide open. Morocco’s win puts them above Belgium in the table, with arguably the hardest match to come for Roberto Martinez’s side on the final matchday.

For Morocco, they head into the Canada game on MD3 with a brilliant chance of progression to the round of 16. Alongside Poland, they are the only teams yet to concede a goal and play twice at Qatar 2022, which has helped give them an 89.3% chance of making the knockout stage after this victory – the highest in Group F. Exciting times for Moroccan football.