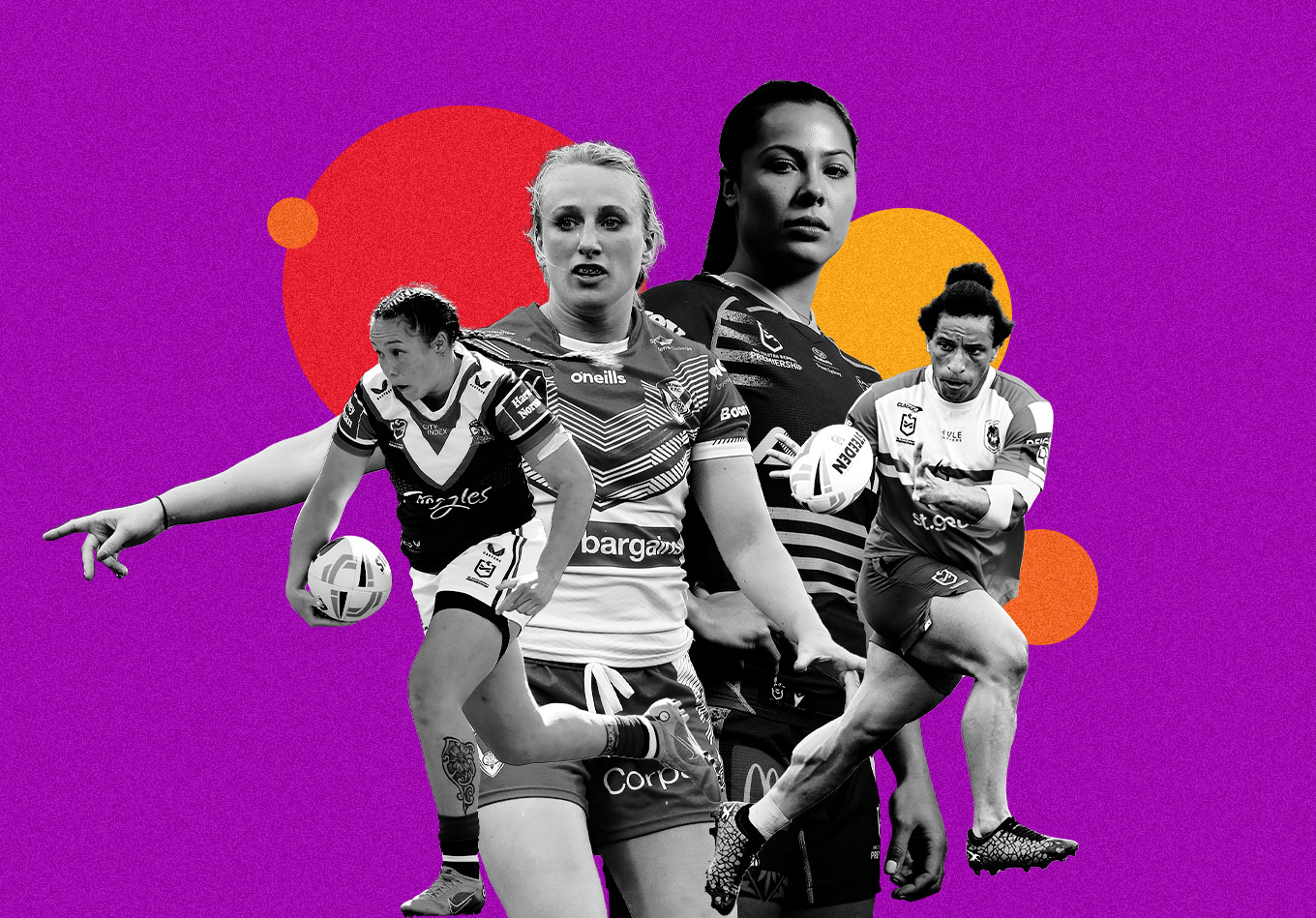 We’ve had to wait for almost an entire year, but the Women’s 2021 Rugby League World Cup finally kicks off next week.

But which players could have a huge impact for their teams? We asked the very best of Opta’s data editors to pick out their players to watch before the action gets underway.

Australia’s forward stocks took a blow less than two weeks out from the 2021 Rugby League World Cup when Millie Boyle announced she wouldn’t be on the plane to England. All eyes will now look to Simaima Taufa; her Parramatta Eels side made a miracle run to the 2022 NRLW Grand Final only to be bested by Boyle’s Knights on the day.

Taufa is no slouch, though. In fact, she should be in any conversation regarding who is the premier forward in women’s rugby league in recent seasons. The Eels’ captain was the image of hard work and effort throughout the 2022 campaign, leading the league in tackles (246) and making 109 carries – one of only four players to make 100 or more.

Her 1,141 run metres throughout the season were the second most of any player in the competition but her work off the ball was just as important, making a league-high 44 decoy runs and leading her team with nine kick pressures for the campaign.

The Jillaroos stalwart is one of the most experienced players in the squad for the 2021 Rugby League World Cup campaign. Her nine appearances are second only to that of Kezie Apps (10) and Ali Brigginshaw (17) and with more than 10 debutants in the side it will be players like Taufa whose actions in leadership will steer Australia to a deep competition run.

Since the 2017 World Cup the Women’s game has grown exponentially in England with the domestic competition adopting the Super League name to mirror the men. The league has continuously expanded with clubs from across the top divisions in England representing teams in the Women’s Super League.  The 2021 Challenge Cup final saw St Helens and York face off in the first final to be nationally broadcast on UK, the following year saw the 2022 final take place at Elland Road setting a new record attendance of 5,888 for a Women’s Rugby League match in Great Britain.

At the forefront of the growth of Women’s Rugby League have been St Helens (formerly Thatto Heath Crusaders) and namely, Jodie Cunningham. Loose forward and 2021 Woman of Steel Cunningham led St Helens to an unprecedented treble in 2021, the first since the creation of the Women’s Super League. Not only have Cunningham’s actions on the field raised the Women’s game to a new level but also her actions off the field are contributing to the growth of the Women’s game after she was appointed National Women’s and Girl’s Development Manager for the RFL.

On the international stage Cunningham’s influence on England was exemplary during the mid-season internationals, where England took on and beat both France and Wales. Across the two games Cunningham contributed 6 try assists in total, 3 in each game and the most out of any England player. Cunningham’s all-round ability in both attack and defence were highlighted against France as she topped both metres gained (163) and tackles made (26).

England kick off the tournament against Brazil on the 1 November and will be looking to book a place at Old Trafford 18 days later.  Cunningham and her team-mates will be looking to continue and cement a stellar year for Women’s sport in England and secure a World Cup on home soil.

Their 2021 squad is bristling with talent and it’s ready to go after the 2022 NRLW season. The Kiwi Ferns team is highlighted by the inclusion of NRLW standout Raecene McGregor, who was head and shoulders above the rest of the competition in terms of chance creation in the 2022 campaign.

McGregor conjured 10 try assists through her five appearances in the 2022 NRLW season. Not only was that the most of any player but it was also four more than the next best player (Jesse Southwell – 6) and came from two fewer appearances than the second and third ranked players in the category.

The Sydney Roosters playmaker was also responsible for five line break assists which was the joint-second most of any player in the competition and just one shy of league-leader Ashleigh Quinlan (6). McGregor couldn’t cross for a try of her own but was still directly involved in more tries than any other player overall (10 try assists).

A team stacked with attacking weapons can provide a fruitful workplace for McGregor at the 2021 Rugby League World Cup and all she has to do is continue her red hot form from the NRLW to give the Kiwi Ferns a great crack at lifting the trophy for the first time in over a decade.

Elise Albert is the muscle behind the strong St George Illawarra Dragons side in the NRLW and she’s set to take on a similar role for the Papua New Guinea Orchids in the upcoming 2021 Rugby League World Cup.

Papua New Guinea will feature at their second ever women’s Rugby League World Cup after bowing out in the group stage of the 2017 edition after a hard-fought loss to Canada saw them finish bottom of the Pool B ladder.

Albert worked as hard as she hits in the NRLW and was a leader in work rate for the Dragons this campaign. She made either a run or a tackle once every 84 seconds in the 2022 season which was the second-most frequent of any St George Illawarra Dragons player to play at least 80 minutes of rugby league. Teammate Tara McGrath-West (once every 72 minutes) was the only player to do so more frequently.

Albert will be one of just two players in the Orchids squad coming from an NRLW team alongside Anika Butler from the Newcastle Knights and as a result will be one of the players the team looks toward to guide them on their trek to progress from Group A. Papua New Guinea will face England, Brazil, and Canada in their group and will consider themselves a very real chance of finishing in the top two and securing a semi-final berth.

Selfless acts in pursuit of the wider team goal are what premiership sides are built upon. Making that extra tackle under fatigue, a tough carry when the side is pinned deep in their own territory or leading the kick chase are all metrics widely valued within a club but can’t always be measured.

Yasmin Clydsdale of the Newcastle Knights epitomised these values as the Knights ascended to seize their inaugural NRLW premiership in 2022.

Making 24 kick pressures, nine more than any other player, Clydsdale was immense in building a body of work deservedly rewarded with inclusion in Australia’s squad for the women’s Rugby League World Cup 2021.

The last try scorer of the 2022 NRLW grand final will be looking to continue that momentum and earn an inaugural Jillaroos cap.

Otesa Pule was one of the most damaging interchange players in the 2022 NRLW season and she’ll be looking to make a further impact with New Zealand at the women’s Rugby League World Cup 2021.

Pule made 10 tackle breaks when coming off the bench for the Sydney Roosters this season, one of only four in the competition overall to reach double figures as an interchange player. She was an almighty presence on a kick return, making 110 kick return metres after coming onto the field, the second most of any interchange player and one of only two to make 100+ (Tayla Prededon – 122) – no other player made more than 80m in this regard.

France youngster Maïlys Borak made her international debut against England in October 2021 and featured in Les Tricolors’ June 2022 Test against England. The fresh-faced forward – who is the youngest player in the France squad for the 2021 women’s Rugby League World Cup – was among the most dynamic in her side’s 36-10 defeat to England earlier this year.

Borak made two offloads in the game, one of just four players to successfully offload the ball more than once. She did so in 45 minutes of game time on the day which was the fewest of any of the four players to make a joint game-high two offloads. The 18-year-old also made 14 tackles from 15 attempts, eight carries, and broke through three tackles in her 45 minutes on the park.

France will be coming up against Australia and New Zealand in Group B of the 2021 women’s Rugby League World Cup, two teams stacked with the best forwards in the world who are seasoned by back-to-back NRLW seasons, and it will be up-and-coming players like Borak who will be tasked with holding the gate against their group opposition.

Laura Mariu will be donning the Canada Ravens jersey for the first time at the 2021 women’s Rugby League World Cup, but she certainly isn’t coming into this tournament without experience. In fact, Mariu will be one of the most experienced players across the entire tournament having participated in each of the last five tournaments – all for New Zealand.

Mariu was a key cog in the Kiwi Ferns’ run to the final of the 2017 women’s Rugby League World Cup, providing polished ball skills on top of hard work at the ruck. Mariu made four line break assists throughout the tournament which was the second most of any forward in the competition and the fifth-most of any player overall.

New Zealand’s offensive prowess meant that they weren’t required to defend to the same quantity as they were allowed to attack but still Mariu’s effort shone for the Kiwi Ferns. Her 104 tackles were the second most of any New Zealand player in the competition and she was one of just seven players across the tournament to make 100 tackles.

The Ravens will be participating at their second women’s Rugby League World Cup and hoping that they can at least match the efforts which saw them reach the semi-finals of the last tournament in 2017. Alongside the experience and expertise of Laura Mariu the Canada side will consider themselves a fantastic chance of doing just that.