MLB Playoffs: Which Teams Have the Edge in Each Division Series? | The Analyst 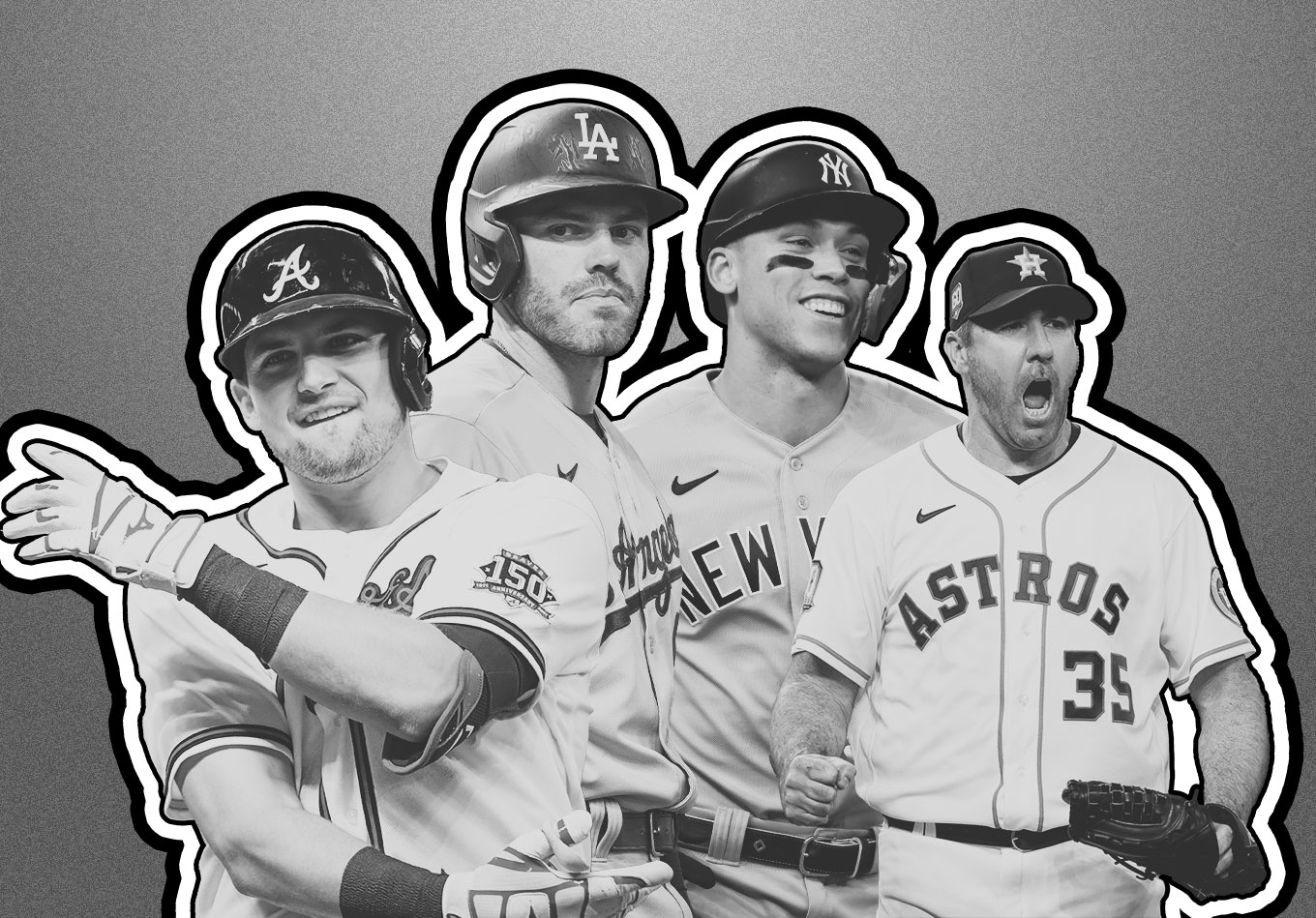 MLB Playoffs: Which Teams Have the Edge in Each Division Series?

After a thrilling wild-card round, the matchups for the American and National League Division Series are ready, and eight teams will be vying to become the new World Series champions.

Who is in a better position to compete in each series? We will thoroughly analyze every matchup and point out the favorites and underdogs.

For that, we will be using raw value (RV+/-), which is a metric that helps us identify what happens after every pitch and not just after the at-bat ends. It examines the pitcher’s command and location, the hitters’ contact, plate discipline and ability to inflict damage, and more.

Here is a breakdown of each series, using RV as a helpful tool.

Starters: The Guardians have an excellent one-two punch at the top of the rotation with Shane Bieber (86 RV-) and Triston McKenzie (82 RV-), but will be forced to throw Cal Quantrill (110 RV-) in Game 1 of the ALDS against the Yankees. Quantrill is not bad at all, but like the Guards’ other starting options, represents a significant drop-off from the top two.

The Guardians’ rotation ranked 14th in RV-, but it’s a decent unit. It’s not as good as the Yankees, though, who ranked ninth in RV- and have three potential aces in Gerrit Cole (84 RV-), Nestor Cortes (68 RV-) and Luis Severino (94 RV-). Advantage: Yankees

Had health been on the Yankees’ side, their bullpen could have competed with the Guardians, but that’s not the case. They lost Michael King, Chad Green and Ron Marinaccio (and Aroldis Chapman for disciplinary reasons), not to mention Clay Holmes and Wandy Peralta will barely make it in time. The Yanks still have Jonathan Loaisiga, Lucas Luetge, Clarke Schmidt and Lou Trivino and they were a solid sixth in RV- in regular season play, but Cleveland gets the nod here. Advantage: Guardians.

Offense: The Guardians scored three runs in 24 innings against Tampa, and that was enough to sweep the Wild Card Series. That tells us everything we should know about their offense, which ranked 26th in RV+ despite having MVP candidate Jose Ramirez and breakout players Andrés Giménez, Josh Naylor and Steven Kwan. They can score some runs, but pitching is the name of the game for this team.

The Yankees’ lineup can be inconsistent at times, but when you have Aaron Judge (204 RV+), you will always have a chance. Behind him, there is a long list of talented hitters who could have an impact, such as Giancarlo Stanton, Anthony Rizzo, Gleyber Torres, Oswald Cabrera, Josh Donaldson, and more. This offense ranked second in RV+ in 2022 and looks poised to make some damage. Advantage: Yankees.

Overall: While the Guardians are a good baseball club, they ranked 18th in overall RV. That doesn’t come close to the Yankees’ fourth-place finish. Cleveland’s bullpen and the Bieber-McKenzie combo could take this series to the maximum of five games, but New York is favored to win and deservedly so. Advantage: Yankees.

Starters: The Astros probably have too much firepower in their rotation for the Mariners bats to handle. Justin Verlander (68 RV-) and Framber Valdez (84 RV-) are an incredible 1-2 punch, and believe or not, Cristian Javier has an even better 57 RV-. The unit is also deep, with Lance McCullers Jr., José Urquidy, Hunter Brown and Luis Garcia. The unit’s collective third-place finish in RV- speaks for itself. Verlander, who will start Game 1, went 5-1 with a 2.34 ERA against Seattle this season.

The Mariners’ rotation is probably better than its rank (18th) in RV- during the regular season indicates. It has the great Luis Castillo (87 RV-) plus reigning AL Cy Young winner Robbie Ray and two excellent young righties in Logan Gilbert and Georg Kirby. The Astros’ unit is just superior. Advantage: Astros.

Bullpen: Everybody talks about the Astros’ offense and starting pitching, but their bullpen is really underrated. The group finished with the second-best RV- in MLB and is deep and effective, with Ryan Pressly, Will Smith, Hector Neris, Ryne Stanek, Phil Maton, Rafael Montero and possibly Javier and Brown ready to dominate.

The Mariners, as we discussed before the wild-card round, have very solid relief corps, too. Except for Paul Sewald, the unit was actually an important part of the Game 2 turnaround and is just as good as the Astros’ ‘pen. Advantage: Even.

Offense: Houston has the best offense in baseball, and it may not be that close. Yordan Álvarez (192 RV+) is a top-five hitter in baseball, and there is also Jose Altuve, Kyle Tucker, Alex Bregman, Yuli Gurriel, Jeremy Pena and Chas McCormick. Not having Michael Brantley will hurt, but the Astros have potent bats in bunches. Álvarez was a problem for the Mariners this season, batting .327 with five home runs and 13 RBIs in his 15 meetings.

Seattle’s offense is good, but not great, Saturday’s 10-run performance notwithstanding. They ranked 12th in MLB in RV+ and have some bats who can do damage, from the great Julio Rodriguez to the surging Cal Raleigh. Ty France and Eugenio Suarez deserve praise, too. France batted .338 with four homers and 12 RBIs in 18 games in the season series, but the Astros did a nice job against Rodriguez (.218), Suarez (.167) and Raleigh (.143). Houston’s edge here is clear. Advantage: Astros.

Overall: The Mariners are a good baseball club evidenced by ranking 11th in overall RV, but the Astros (second place in combined RV) took 12 of the 19 meetings (including six of the last seven) in the regular season and are just better all-around. Baseball is so unpredictable that we might see Seattle sweeping, but it’s extremely unlikely Houston loses this series. Advantage: Astros.

Starters: The Braves can brag about having four aces: Max Fried (68 RV-) will take the ball in Game 1, and then they have Charlie Morton (99 RV-) and Kyle Wright (92 RV-) ready to hop on the mound. The wild card here is rookie phenom Spencer Strider: He led the majors among those with at least 75 innings with a 46 RV-, but suffered an oblique strain late in September that has his status up in the air. That hurts because the right-hander went 4-0 with a 1.27 ERA against the Phillies this season. In any case, this group ranked fifth overall in RV- and should be able to cope with a diminished role from Strider during the NLDS.

Since the Phillies had to use both Zack Wheeler and Aaron Nola to advance past the St. Louis Cardinals, they will have to go with Ranger Suárez (98 RV-) for Game 1. That’s not ideal, but they would be getting back the marvelous duo of Wheeler (70 RV-) and Nola (64 RV-) for Games 2 and 3. Wheeler has gone 4-2 with a 2.04 ERA in his last 10 starts against the Braves dating back to the 2020 season. Bailey Falter, Noah Syndergaard and Kyle Gibson complete the Phillies’ group starters, who ranked fourth in RV- in the big leagues. Advantage: Even.

Bullpen: The Phillies’ relief corps are a solid, if unspectacular unit. They have Seranthony Domínguez, David Robertson, Brad Hand, José Alvarado, plus the additions of Falter, Syndergaard and Gibson for the NLDS. Ranked 14th in RV-, however, they can’t compete with the Braves’ best-ranked bullpen.

The Braves have a lot of names to choose from, and not all of them will make the roster: Kenley Jansen, Raisel Iglesias, Collin McHugh, Tyler Matzek, A.J. Minter, Jackson Stephens, Dylan Lee, Jesse Chavez, Bryce Elder, Jake Odorizzi, and more. The reigning World Series champions put together a really strong bullpen. Advantage: Braves.

Offense: Philadelphia’s lineup ranked sixth in baseball in RV+; and as long as the Bryce Harper (142 RV+), Kyle Schwarber and Nick Castellanos trio is healthy, they will challenge any pitcher. Rhys Hoskins, Alec Bohm, Jean Segura and JT Realmuto are pretty solid, too. The Braves did a pretty good job against Harper (.286), Schwarber (.127), Hoskins (.246) and Castellanos (.191) this season, but Bohm hit .342 with four doubles and a homer in the 19 meetings.

Atlanta’s offense, in turn, ranked fifth in RV+ and boasts an incredible collection of homegrown talent: Ronald Acuńa Jr. (129 RV+), Austin Riley (140 RV+), William Contreras, Michael Harris II, Vaughn Grissom, and even Dansby Swanson. Riley batted .351 in the season series, while Swanson hit .333 with two homers and nine RBIs and Contreras batted .297 with four dingers and eight RBIs. It’s too bad Ozzie Albies won’t get to play, at least not in the NLDS. The Braves’ offense is at least as good as the Phillies. Advantage: Even.

Overall: There is a difference between the Phillies and Braves: the former have a unit that is not near the top five in the league, which is the bullpen; while the latter are top 10 in every facet of the game. The Braves took 11 of the 19 in the season series, including five of the last seven meetings. They also have the edge in combined RV. Advantage: Braves.

Starters: The Padres’ rotation is actually elite. The unit ranked sixth in RV-, and boasts aces such as Yu Darvish (76 RV-), Blake Snell (68 RV-) and Joe Musgrove (75 RV-). Since they used all three against the New York Mets, they will turn to Mike Clevinger for Tuesday’s Game 1. Darvish has a 2.62 ERA and 72 strikeouts in 55.0 innings over nine starts the past two seasons versus Los Angeles. Sean Manaea is also around and could start Game 2, though he posted a 11.72 ERA in five appearances against the Dodgers this season.

The Dodgers, however, have the top-ranked rotation in RV- and have lots of quality names to match or exceed the Padres: Julio Urías (70 RV-) will get the ball in Game 1 with the great Clayton Kershaw (68 RV-) likely going in Game 2. Urías has dominated the Padres, going 5-0 with a 1.00 ERA in his last six starts dating to last season. LA also has Tyler Anderson, Andrew Heaney, Tony Gonsolin and Dustin May (currently on the IL but with chances of returning soon) available as starters if they like. Anderson is 4-1 with a 2.14 ERA in his last seven starts versus San Diego going back to 2020. It’s very close, but the Dodgers’ quality and depth is unmatched. Advantage: Dodgers.

Bullpen: The Padres were able to put together a bullpen that ranked seventh in RV-. Josh Hader has been much better of late and leads a group that also has Luis García, Robert Suárez, Nick Martinez, Pierce Johnson, Tim Hill, Adrian Morejon, Steven Wilson and Craig Stammen, among others.

Offense: San Diego’s 16th-ranked offense battered Max Scherzer and Chris Bassitt in the NL Wild Card Series. They have, after all, Manny Machado (128 RV+), Juan Soto (161 RV+, 134 discipline+), Josh Bell, Jake Cronenworth, and more. Machado hit .254 with four homers in 19 games versus Los Angeles this season, but Soto (.184), Bell (.171) and Cronenworth (.176) all struggled. We will see what they can do against the Dodgers’ elite pitching.

Overall: The Dodgers rank No. 1 in RV+, while the Padres are ninth. Los Angeles won the regular season matchup 14-5, and it was 12-7 last year. They also swept the Padres in the 2020 postseason. San Diego has a rough matchup once again, and it still doesn’t look to have enough firepower to challenge the almighty Dodgers. Advantage: Dodgers.