MLB Playoffs: Can Bryce Harper's Hot Bat Carry the Phillies Past the Padres in the NLCS? | The Analyst 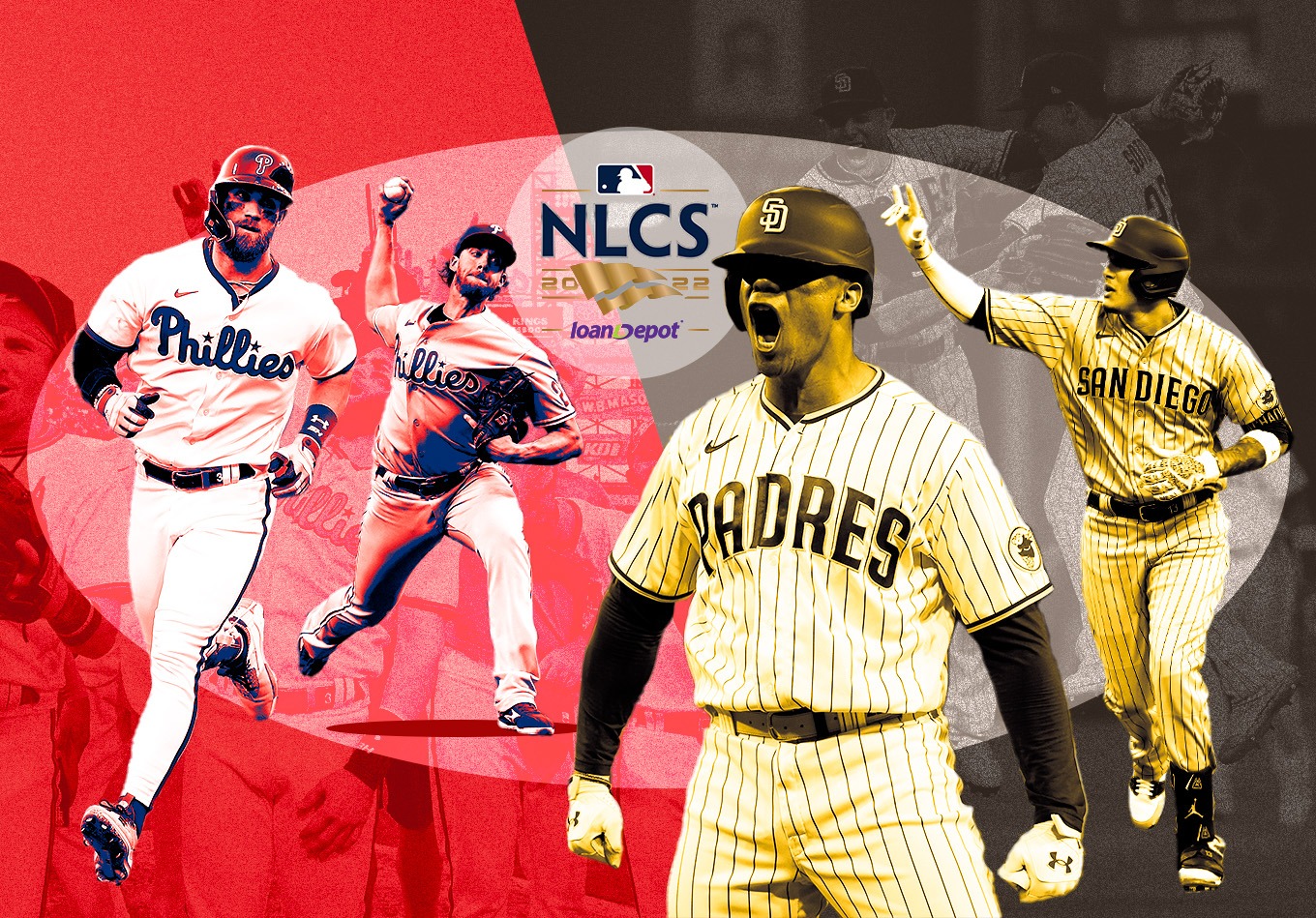 MLB Playoffs: Can Bryce Harper’s Hot Bat Carry the Phillies Past the Padres in the NLCS?

It will be a battle of underdogs.

The Philadelphia Phillies dominated the reigning World Series champion Atlanta Braves in four games, while the San Diego Padres knocked out the mighty Los Angeles Dodgers, also in four, to get here.

Now the sixth-seeded Phils and fifth-seeded Friars will open an unlikely National League Championship Series on Tuesday at Petco Park.

Both teams are solid all around, perhaps even more than their regular season records would suggest. Both have elite rotations, good bullpens, and at least one true star.

The Padres have Manny Machado and Juan Soto in their lineup, yes. However, there’s no hotter player on the planet than outfielder Bryce Harper. He could end up being a game-changer for the hungry Phillies.

The current NL MVP completely dominated the opposition by our model during the regular season. He finished with a 142 raw value+ mark and an excellent 165 BIP+, and he’s upped those marks to 149 and 176, respectively, since the start of the postseason. Both rank seventh in the majors among those with at least 400 plate appearances.

Raw value (RV+) examines a hitter’s (or pitcher’s, depending on the context) performance on a per-pitch basis. It measures the outcome of each pitch and gives us useful information about a hitter’s skills: plate discipline, quantity and quality of contact, power, and other factors are looked at.

For RV+, which is a rate stat, 100 is considered average, so we can say that Harper was been well above average in 2022 and has been even better in the playoffs. BIP+ explores how much damage a hitter inflicts after contact. It is also adjusted to produce a 100 average value, so Harper’s marks have also been sensational there.

Harper has homered against the St. Louis Cardinals in the Wild Card Series and against the Braves in the NL Division Series. Will he make the Padres’ fantastic pitching staff his latest victim?

With Harper leading the way, let’s evaluate how the two teams matchup offensively before moving on to the other key areas that loom large in this NLCS showdown.

Offense: Harper is a true difference-maker, but the Phillies (sixth in RV+) are much more than just him. Rhys Hoskins, Brandon Marsh and JT Realmuto have all homered, and Marsh and Jean Segura both have an OPS over 1.000 in the postseason. Alec Bohn made some strides this year, and we haven’t seen the best of Nick Castellanos and Kyle Schwarber in the playoffs…yet. The latter had an elite 178 BIP+ during regular season play.

The Padres have some really good hitters: Machado (128 RV+) and Soto (161 RV+) need no introduction, Trent Grisham (three homers, 1.329 OPS in the playoffs) has suddenly morphed into prime Babe Ruth in October, and Josh Bell, Austin Nola, Jurickson Profar, Wil Myers and Ha-Seong Kim all remain capable hitters. But there is no question that the Padres’ 16th-ranked offense appear to be no match to Philly’s unit. Advantage: Phillies

Starters: The Phillies had the fourth-best rotation in baseball according to RV-, and a big reason behind that excellent finish is that our model loves Aaron Nola and his league-leading minus-34.7 total RV. He was phenomenal this year, but the Phillies also have a top-tier arm in Zack Wheeler (70 RV-) ready to take the ball and go as long as possible.

The problem with the Phillies’ rotation is that the drop-off in talent after Nola and Wheeler is significant. They have good arms in Ranger Suarez, Kyle Gibson, Bailey Falter and Noah Syndergaard, but not as good as their top two. This will be somewhat mitigated by the fact that Philadelphia, if the series does go the distance, will be able to get two starts by Wheeler and Nola on full rest.

The Padres finished sixth in RV-, and they have three excellent starters in Yu Darvish (76 RV-), Blake Snell (68 RV-) and Joe Musgrove (75 RV-). Mike Clevinger has the potential to join this tier at some point.

With that foursome, they should have competitive pitchers making starts in all seven games should the series go that far, even if Clevinger was battered in Los Angeles. All things considered (star power and depth) the units are evenly matched. Advantage: Even

Bullpen: The Phillies’ bullpen has come a long way in 2022 given the struggles it has had in recent years. The unit ranked 14th in RV- during the regular season, but manager Rob Thomson has found several reliable guys like Seranthony Dominguez (3.2 scoreless innings with eight strikeouts so far in the playoffs), Andrew Bellatti, Brad Hand, Jose Alvarado and starter-turned-reliever Zach Eflin. They might even get David Robertson back for the series.

If the Phillies bullpen is good, the Padres’ unit is elite. It ranked seventh in MLB in RV-, but it had its coming out party in the NLDS against the Dodgers. Robert Suarez and Josh Hader have combined for 10.1 scoreless frames with 12 strikeouts this postseason.

Overall: Both the Phillies and the Padres are well-balanced teams that have heated up at the right time. It will be a hotly contested series that could go all the way to seven games.

Philadelphia was fifth in combined RV during the regular season, while San Diego was ninth. It’s something to keep in mind, as the Phillies, particularly, have been better than their regular-season record might indicate.

While there is no clear-cut favorite, the Phillies’ offense and the fact that club will have both Wheeler and Nola locked and loaded for four games may give them the slightest of edges. Advantage: Phillies