The Yays and Nays: Our Week 1 Fantasy Football Rankings, Projections and Top Plays | The Analyst 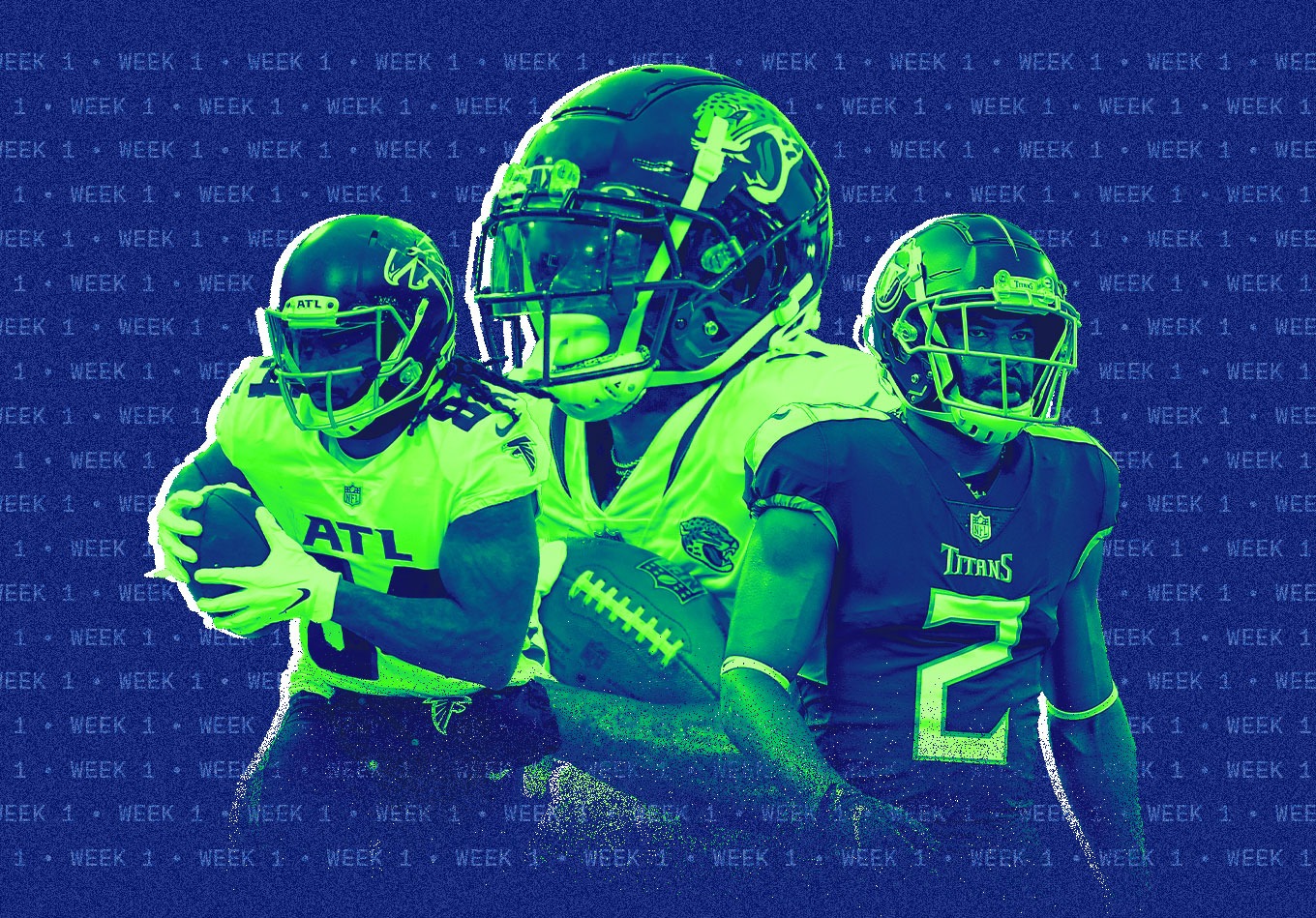 The Yays and Nays: Our Week 1 Fantasy Football Rankings, Projections and Top Plays

Welcome back to another season of Yays and Nays!

This year, we are proudly displaying our model’s rankings and projections on our website each week. They’ll be updated continuously throughout the week all NFL season.

Always refer back to the rankings for any questions you have about who you should pick up off waivers or start in your lineup any given week.

Remember, we’re highlighting the players our fantasy football models point to as being ranked too high or low compared to industry consensus.

Let’s get right to it.

Note: We’re comparing our rankings to the expert consensus rankings (ECR) from Fantasy Pros. These rankings update throughout the week. (We pulled these numbers from Wednesday.) Once again, we are using PPR unless noted otherwise.

Aaron Rodgers, QB (GB) vs. MIN (ECR: 12, Our Rank: 10): With Davante Adams now on a different team, Rodgers will be more crucial than ever to the Green Bay Packers offense. And lucky for him and all Packers fans, his first opponent is a team he absolutely owns (well, aside from the Chicago Bears, of course).

A different cast of receivers for Rodgers this go around? Doesn’t matter. A potentially run-heavy game plan for the team that took the most amount of time between plays last season? Doesn’t matter. It’s Rodgers against the Vikings.

So who’s ahead of him in the top nine?

But our model still loves Rodgers’ chances of providing QB1 value. He’s projected to score more points than some of the higher fantasy draft picks like Dak Prescott of the Dallas Cowboys, Matthew Stafford of the Los Angeles Rams and Joe Burrow of the Cincinnati Bengals.

Cordarrelle Patterson, RB (ATL) vs. NO (ECR: 27, Our Rank: 16): We’ve already included Patterson in our list of players who project to outperform their ADP.

That starts in Week 1 against an incredibly strong New Orleans Saints rush defense from a season ago. The Saints finished first in the NFL in yards allowed per carry. That includes a Week 9 performance against the Atlanta Falcons in which the Saints held Patterson to 10 yards on nine carries.

But Patterson also finished that week with 19.6 fantasy points – without scoring a touchdown. How? Because Patterson recorded 126 receiving yards on six receptions. With Drake London nursing an injury, Patterson is a reliable option out of the backfield for new starting quarterback Marcus Mariota.

Combined with what should be a better rushing output, and better volume, Patterson is a solid RB2 choice this week.

Robert Woods, WR (TEN) vs. NYG (ECR: 39, Our Rank: 16): Woods, the wide receiver affectionately known as “Bobby Trees,” is set to step on the field for the Tennessee Titans as their No. 1 wide receiver. He replaces A.J. Brown, who was traded to the Eagles.

Woods, like Patterson, was on our list of players being drafted too low, so it’s not surprising that the same is happening to him in Week 1. His ECR of 39 essentially says he’s not worthy of being started this week. But with the New York Giants likely centering their game plan around slowing Derrick Henry and the Titans run game, Woods is set up to be the primary recipient.

Our models are projecting him for 7.5 targets – 17th among all wide receivers. With that sort of volume, Woods only needs to be solid to surpass his ECR. He has a long history of being more than solid. If you have Woods, you’re confidently starting him this week.

Hunter Renfrow, WR (LV) vs. LAC (ECR: 35, Our Rank: 17): All of the fantasy discussions surrounding the Las Vegas Raiders this entire preseason has centered around either Davante Adams’ fantasy prospects with Derek Carr as his quarterback or Josh Jacobs’ chances of duplicating his finish as an RB2. There’s been almost no mention of Renfrow, who was Mr. Reliable for Carr last season.

Amongst all players who ran at least 540 routes, Renfrow ranked first in open percentage. In that same group, only Tyler Boyd of Cincinnati finished with a better catch rating than Renfrow’s 0.953.

And his success translated into fantasy as well. In 17 games played last season, Renfrow only had three games in which he didn’t record at least five receptions or score a touchdown.

Carr had at least 200 passing yards in every game except two last season. You guessed it – both were against the Chargers. But even in those two games, Renfrow totaled 10 catches and three touchdowns.

He’s a security blanket for Carr, and in a game that could be a high-scoring affair, Renfrow is a safe WR2 play this week.

Kirk Cousins, QB (MIN) vs. GB (ECR: 15, Our Rank: 20): On the other side of the field of the reigning back-to-back MVP is Cousins, who actually put up very similar counting stats to Rodgers last season. And Cousins didn’t lose his star wide receiver during the offseason. His running back tandem is also elite.

Cousins threw for 341 yards and three touchdowns in his lone game against the Packers last season. Still, he’s on our list of quarterbacks to be wary of this week. The reasons are twofold. First, Dalvin Cook is projected to receive the third most carries of any running back. Second, and more importantly, Cousins provides zero value as a runner. He averaged 1.8 carries and 7.2 rushing yards per game last season.

Without that rushing floor, Cousins is reliant on his passing yards and TDs. And even though he had a really nice 2021, and Rodgers rushed for less yardage than Cousins last year, there’s still a large difference in ability between the two. That manifests itself in fantasy football, where Rodgers finished as QB6 and Cousins as QB11. That trend is likely to continue this week as Cousins is a borderline QB2, according to our algorithms.

He’s ranked behind the likes of Tua Tagovailoa of the Miami Dolphins, Daniel Jones of the Giants, Jameis Winston of the Saints and Ryan Tannehill of the Titans. Not good.

Saquon Barkley, RB (NYG) vs. TEN (ECR: 11, Our Rank: 21): This isn’t an indictment on Barkley, a player our model is actually high on this season.

Instead, this is an acknowledgment that Barkley is playing his first game under new head coach Brian Daboll and the Giants are facing a Titans team that finished second in fewest rushing yards allowed per game last season.

And despite his obvious talent, Barkley is coming off a season in which he averaged 3.7 yards per carry. Amongst all players with at least 100 carries, here are the only running backs who had a lower average: Mark Ingram, Rex Burkhead, Myles Gaskin, Chuba Hubbard and Mike Davis. That’s a whole lot of backups.

There are better days ahead for Barkley. But for this week, you’re likely starting him and hoping he can fall into the end zone to provide RB2 value.

Travis Etienne, RB (JAX) vs. WSH (ECR: 18, Our Rank: 35): Etienne is a fine player. He was extremely productive in college, with current teammate Trevor Lawrence at the helm. He also might just be the third-down back for the Jacksonville Jaguars with James Robinson in the backfield with him after his breakout rookie season.

You don’t usually find those types of players with an RB2 label, but that’s what Etienne’s ECR indicates he is. To make matters worse, he’s facing a Washington Commanders team that played, among others, Austin Ekeler, Aaron Jones and Barkley twice last season and held them to a combined 10 receptions for 51 yards.

So, in conclusion, what we have is a player who’s never played an NFL game in the backfield with a player who was named to the All-Rookie team two years ago, facing a defense that was excellent at limiting pass-catching running backs. Until we learn more about the timeshare in the Jacksonville backfield, it’s a risky play to trust Etienne.

Darnell Mooney, WR (CHI) vs. SF (ECR: 26, Our Rank: 41): Pop quiz! Without cheating, can you name another Bears wide receiver? We’ll give you 81 seconds to think of one. Why? Because that’s where the second wide receiver on the Bears is projected to finish in our rankings – 81st.

That creates a massive problem. The 49ers can focus most of their attention on Mooney and make any of the other Bears wideouts beat them. But this problem also exists because Justin Fields is the only quarterback our algorithms project to pass for less than 200 yards. He also has the fewest projected passing touchdowns.

In a game that has the lowest over-under of any Week 1 matchup, the chances are high that this one will feature two heavy ground attacks. Mooney may struggle to receive the volume to reach WR2 level. You’re likely best served looking elsewhere.

By the way, that Bears receiver? Byron Pringle. Props to you if you thought of him!

Kyle Pitts, TE (ATL) vs. NO (ECR: 3, Our Rank: 12): Our rank is not a typo for Pitts, who we highlighted earlier in the preseason. The reason we have outlier rankings like this occasionally is that our algorithms have no emotional components attached.

All our model sees is a tight end who totaled five receptions for 70 yards in two games against the Saints in 2021. With Matt Ryan now leading the Indianapolis Colts, the quarterback throwing to him has the second fewest projected passing yards and touchdowns this week.

That’s the aforementioned Mariota, who is behind Joe Flacco of the New York Jets, Baker Mayfield of the Carolina Panthers, Jared Goff of the Detroit Lions and other middling QBs in our rankings. In fact, only Geno Smith of the Seattle Seahawks, Davis Mills of the Houston Texans and Fields are projected to score fewer fantasy points.

If you have him, you paid a premium for him in the draft. That means you’re starting him, but expectations should be lowered for Week 1.