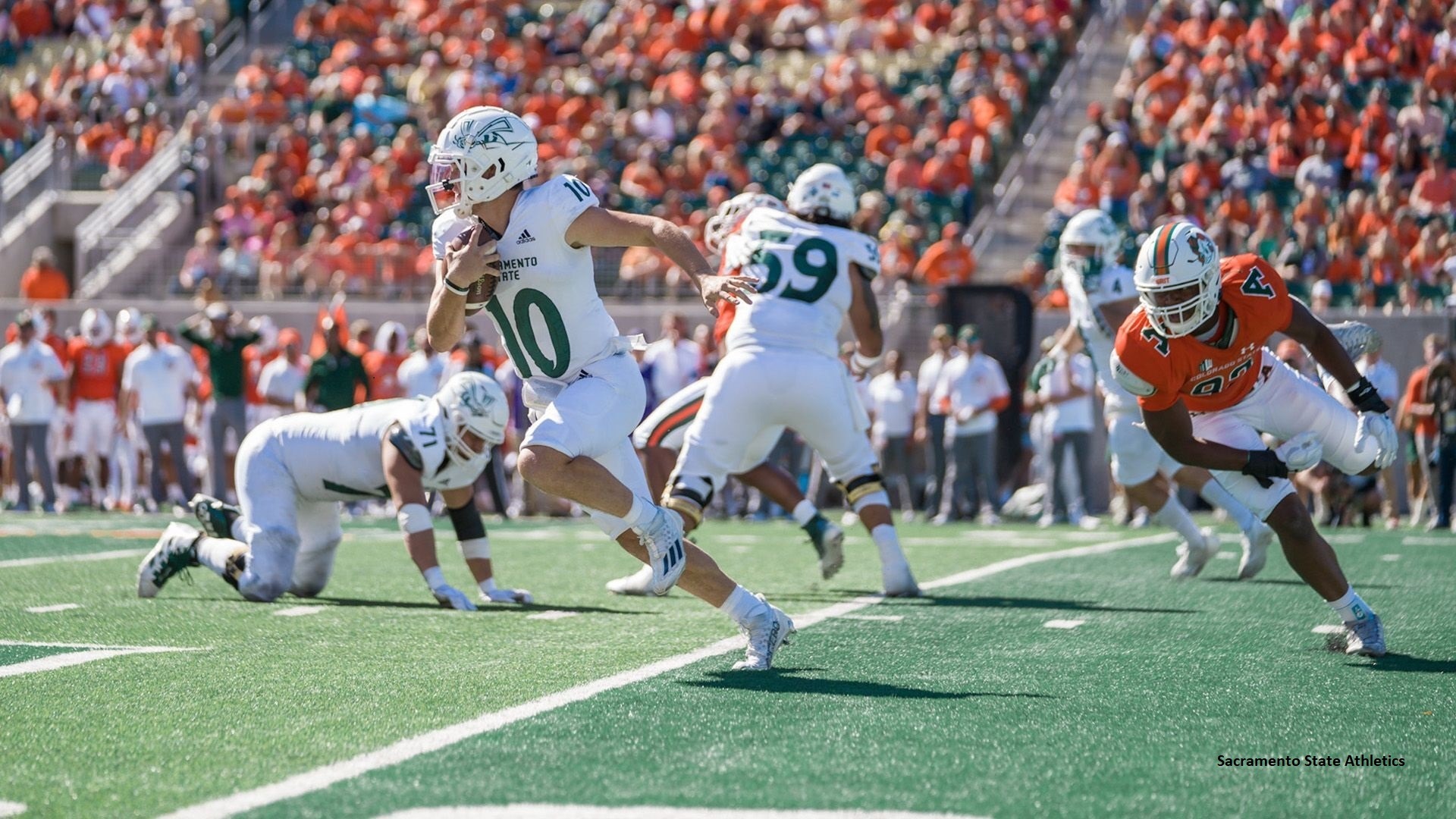 If you hoped for terrific FCS college football games on Saturday, all you needed to know was conference games began to take over the schedule

White-hot action with tight finishes and upsets was basically predetermined.

The superb play even left the sense there won’t be enough spots in the Stats Perform FCS Top 25 on Monday to accommodate all the worthy teams.

Following are takeaways from the Week 4 action:

The final five teams in the Top 25 won their games, which isn’t necessarily good news for the first five teams outside the rankings that made a noticeable push to get in. Most impressive was Southeastern Louisiana (unofficially No. 27) defeating No. 4 (tie) UIW 41-35 in the Southland on the game’s final play – redshirt freshman quarterback Eli Sawyer found C.J. Turner wide open due to busted coverage, and the wide receiver went 59 yards to shock the defending conference champion.

The wildness across CAA Football is basically just getting started, unless you’re New Hampshire and off to a 3-0 start atop the largest FCS conference.

Elon stunned previously unbeaten William & Mary with the final 19 points of a 35-31 road win. Jalen Hampton’s third rushing touchdown with 1:07 to play provided the Phoenix’s first lead and the winning margin. Also, Monmouth and Villanova traded touchdowns the entire game, but the visiting Hawks scored last on Jaden Shirden’s 16-yard run in the final minute for a 49-42 road win over the defending co-champion Wildcats. Shirden, the FCS’ rushing leader, has a pair of 200-yard performances in the Hawks’ last three games.

After missing last season with a knee injury, South Dakota State quarterback Mark Gronowski appears back to his level as the MVFC offensive player of the year in the spring 2021 season, when the Jackrabbits were the FCS runner-up. He outdueled Missouri State signal caller Jason Shelley, who received the award in the fall 2021 campaign, in the No. 2 ‘Rabbits’ 28-14 win over the No. 6 Bears.

Gronowski passed for 319 yards and four touchdown passes – both career highs – as SDSU improved to 12-1 all-time in the series.

Montana, which shared the No. 2 ranking with South Dakota State, has yet to give up even 230 yards to an opponent in a 4-0 start. The FCS’ No. 2-ranked defense limited Portland State to 199 yards for a 53-16 thrashing in the Big Sky.

Stock Up: Idaho has yet to post a winning record – in the Big Sky or overall – since it dropped back to the FCS from the FBS in 2018, but this may be the season. The Vandals (2-2), who played well in losses to FBS programs Washington State and Indiana, have enjoyed more than a 10-minute advantage in time of possession against each opponent, topped by a nearly 23-minute advantage in their 27-10 conference win at Northern Arizona. First-year coach Jason Eck formerly South Dakota State’s offensive coordinator, is bringing along redshirt freshman quarterback Gevani McCoy, who has completed over 70 percent of his passes.

Stock Down: Nicholls has a streak of five straight seasons with a winning record, but the Colonels are 0-4 after suffering a 52-21 loss to Jacksonville State. Each of their pre-Southland losses has been by at least 26 points.

Sacramento State has long played in the shadow of Big Sky powers such as Montana, Montana State and Eastern Washington that it’s almost as though third-year coach Troy Taylor is underrated even though he has led the Hornets to two conference championships and a 15-1 Big Sky record while also claiming the 2019 Eddie Robinson Award and two conference coach of the year awards. This season, the No. 6 Hornets (3-0) have yet to trail in a game, and their 41-10 hammering of Colorado State represented their first win over an FBS opponent since 2012 and third overall. Asher O’Hara, who splits time at quarterback, rushed for two touchdowns and was 10 of 10 with a TD pass.

FCS teams are 8-96 against the FBS this season, with 15 remaining matchups.

It’s difficult enough that the Ohio Valley Conference doesn’t have a matchup between defending champion UT Martin and Southeast Missouri on the schedule, but it also appears it’s the wrong season for it to have lost Austin Peay in a move to the ASUN.

Fordham entered its visit to Ohio U. ranked first in the FCS in offensive yards per game (628.3) and third in points per game (49.3), but fell 59-52 despite improving on both averages. Fotis Kokosioulis caught 13 passes for 320 yards – a Patriot League record and the ninth-most in a game by an FCS player – and four touchdowns. Tim DeMorat didn’t have the game high despite passing for 503 yards (Ohio’s Kurtis Rourke passed for 537 yards), and he had six touchdown passes.

In the Rams’ 3-1 start, the two-time PL offensive player of the year has passed for 1,805 yards and 22 TDs. Over the last 25 FCS seasons, that’s the ninth-most yards in a four-game stretch and tied for the second-most TDs (with Grambling State’s Bruce Eugene in 2005) behind Sam Houston QB Jeremiah Briscoe’s 23 in a four-game stretch in 2016.

Jackson State hasn’t been in the top 10 of the national rankings since 1997, but it could happen this week after the No. 11 Tigers beat Mississippi Valley State 49-7 in the SWAC to improve to 4-0. Sophomore Shedeur Sanders set career highs with 40 completions, 51 pass attempts and 438 yards while passing for four touchdowns and one interception.

The two teams immediately ahead of coach Deion Sanders’ squad – No. 9 Villanova and No. 10 Chattanooga – lost their games.

In a sloppy game (seven turnovers), top-ranked North Dakota State rushed for 200 yards in the second half and scored 24 unanswered points to beat South Dakota 34-17. Fullback Hunter Luepke had 118 of his 146 rushing yards and scored two touchdowns after halftime. … It’s hard to do on the red turf, but No. 4 (tie) Montana State has won at Eastern Washington in consecutive seasons after escaping with a 38-35 win in the Big Sky. Quarterback Sean Chambers got the bulk of the playing time with Tommy Mellott knocked out of the game and produced 160 rushing yards and three touchdowns, including a game-winning, 13-yard run with 3:26 remaining. Elijah Elliott added 156 yards and a touchdown to aid the banged-up running backs unit. … Ethan Gettman kicked a 37-yard field goal as time expired to allow Bryant (1-3) to walk off with a 31-29 victory over LIU. … San Diego entered the season with the FCS’ best conference winning percentage since 2011 (.907), but the Toreros lost their Pioneer Football League opener at Valparaiso 28-21. Valpo quarterback Mason Kaplan, a redshirt freshman, came off the bench to pass for two touchdowns and rush for one. … In a matchup of two-time defending conference champions, Sacred Heart (Northeast) rallied to beat Dartmouth (Ivy) 38-31 in overtime. Running back Malik Grant rushed for two touchdowns in the second half and then scored again in the extra session, helping the up-and-down Pioneers (2-2) end Dartmouth’s 20-game non-league winning streak. … Two first-year coaches earned their initial wins: Eastern Illinois’s Chris Wilkerson 35-21 at Murray State and McNeese’s Gary Goff over Mississippi College 32-17. … North Carolina A&T made it seven straight wins over South Carolina State 47-27. Considering the opposing defenses, A&T running back Bhayshul Tuten’s three straight 100+ yard games are exceptional: North Dakota State (127), Duke (133) and SCSU (140). … Having fallen out of the national rankings after 58 straight appearances, Kennesaw State underwent a quarterback change from first-team preseason All-American Xavier Shepherd to Jonathan Murphy and then barely held on to beat struggling Wofford 24-22. Murphy, a standout in the 2019 FCS playoffs, played well with 28 carries for 138 yards and two touchdowns, and he was 11 of 14 for 107 yards. … Holy Cross’ 35-10 cruise past Colgate means the No. 13 squad has won its last 12 games against Patriot League opponents by 10+ points and on average by 25 points. The Crusaders’ anticipated game against Fordham will be played on Oct. 29 in Worcester, Massachusetts. … No. 12 Weber State improved to 4-0 by holding off UC Davis 17-12. Josh Davis, a two-time 1,000-yard rusher, reached 100 yards on the ground for the first time since March 2021. … Alcorn State reversed a 21-10 deficit to Arkansas-Pine Bluff midway through the third quarter with the final 28 points of a 38-21 SWAC win. Syracuse transfer Jarveon Howard finished with 24 carries for 295 yards and four touchdowns. … In the ugly score of the week, Stephen F. Austin beat up on NAIA program Warner 98-0.