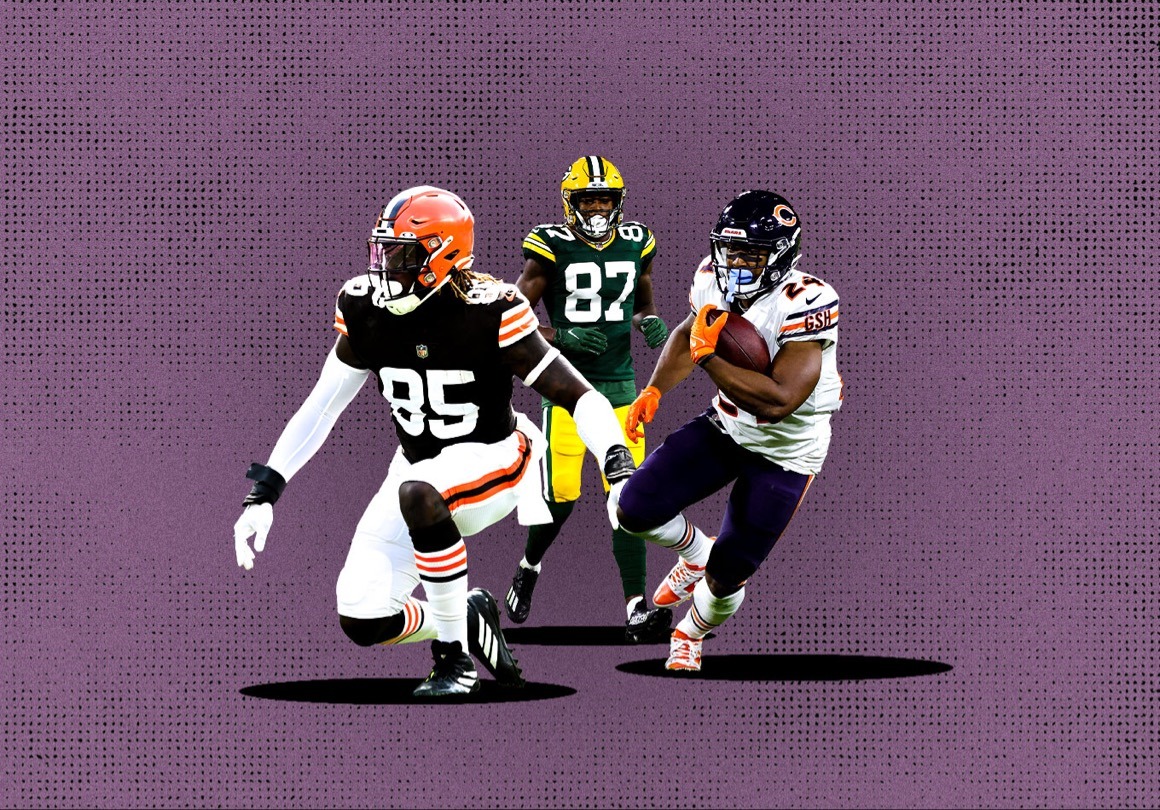 We are three weeks into the season and you have finally seen enough to give up on some of the players on your bench who you were high on at the start of the season. A smart waiver wire pickup now could save your season. But who are the best Week 4 waiver wire pickups?

The bane of your fantasy football team is the ceiling put on certain players by coaches and quarterbacks. DJ Moore, for example, was projected to have a big season. Through three games, he hasn’t even broken 100 yards receiving and finished Sunday with one catch for 2 yards (Don’t give up on Moore yet).

These trends are starting to emerge into the open, too obvious to just ignore. We can start to adjust our expectations based off the game situations players find themselves in too. The Lions, for example, have given up 94 points already through three games but have a point differential of plus-two. They’re keeping up! And they will be involved in more high-scoring games as the season develops. Will they win the Super Bowl? No. But is every skill player on the team worth a look? Yes.

Tennessee is the team with the worst point differential at minus-33. After Derrick Henry, who is only 10th in fantasy scoring at running back, is there anyone you can trust weekly on this team?

If you’re losing your cool and need change to salvage your season or just want to improve your roster, here are some players to consider. As always, refer back to our fantasy football rankings for updates throughout the week.

The first potential waiver wire add appeared like a vision on Thursday night. Every time Jacoby Brissett dropped back to pass in the first half, Njoku was there, calling for the ball and open for business. His 10 targets in Week 3 put him tied for second with Zach Ertz and behind only Mark Andrews (13).

Njoku is doing his best to convince us he’s a strong option.

In reality, he ran 27 routes but caught the ball nine times – the most on the team. He only went for 89 yards on those receptions, though he added a touchdown to finish in the top tier of tight ends for the week.

Njoku’s 149 burn yards are only good for 11th among tight ends with at least 10 targets, but it’s the volume that matters here. And his 93.8% open percentage is the highest of that same group.

Njoku got a massive extension in the offseason. The Browns believe in him and while Amari Cooper is the main receiving option with 27 targets (a 31% target share) through three weeks, Njoku has emerged as Brissett’s No. 2. The tight end has 16 targets for an 18% target share.

There is no tight end in the league on the field more often than Njoku. He has seen 197 snaps (Pat Freiermuth of the Pittsburgh Steelers is second with 149). Njoku does everything well, including pass and run blocking, which might not appeal to fantasy football owners but belies his importance to this team.

Doubs, who we mentioned last week, is off to a ‘slow’ start for the Packers and only rostered in 16.1% of ESPN leagues, but he’s their leading receiver with 14 receptions and 137 yards.

The Packers wide receiving corps was thrown into injury crisis mode before the showdown with the Tampa Bay Buccaneers. Sammy Watkins was put on IR during the week and Christian Watson sat out due to a hamstring injury. Randall Cobb was suffering from illness and Doubs was thrust into the limelight.

Matt LeFleur had said he needed to find ways to get Doubs the ball more after Week 2 and that task was made easier by the rash of injuries. Tampa Bay’s defense is notoriously stingy, giving up just 4.9 net passing yards per play — third lowest in the league. But Doubs had eight catches on eight targets for 73 yards and a touchdown.

Doubs’ burn percentage of 75.0 was fourth among receivers with at least six receptions in Week 3. He was tied for first with a 100% open target rating (along with Zay Jones). For all eight of his targets, he was open and Aaron Rodgers found him. This could be the beginning of a special connection.

Half of Doubs’ 16 targets this season came on Sunday night, but that volume isn’t going to dip now given Watkins’ injury.

The second-year running back was mentioned as a strong handcuff play since the start of the season given how often the Bears run the ball. Justin Fields admitted after the win over the Houston that he played like ‘trash,’ and it’s clear Chicago isn’t going to open up the passing game any time soon.

Herbert is rostered in just 30% of leagues on ESPN and David Montgomery is considered day-to-day with ankle and knee injuries. He has 33 carries to Montgomery’s 35, but his 7.3 yards per attempt is far better than Montgomery’s 4.5.

We mentioned Williams last week, but his situation just became even more enticing. Against the Minnesota Vikings, we got further evidence that anything inside the 20 is Williams territory. He has now scored four touchdowns in three games, while D’Andre Swift has scored just once on the ground and once through the air.

Now Swift is dealing with ankle and shoulder injuries, and “could miss some time,” according to NFL Network. That’s likely to create a waiver-wire frenzy for Williams this week.

It makes sense. The Lions have run 203 offensive plays (10th in the league) and continue to get involved in big-scoring affairs, ranking only behind the Baltimore Ravens in scoring.

The tight end position has been disappointing this season. Maybe you were on the Cole Kmet bandwagon and are looking to get off at the next stop. Dalton Schultz and George Kittle have missed time and Dawson Knox is a mystery at this point.

Conklin needs to be mentioned here by virtue of his targets alone. He’s a top-five tight end in this regard with 23 through three weeks. That’s a 16% target share that ranks second on the team. Garrett Wilson has emerged as the Jets’ No. 1 wide receiver, but Conklin has as many receptions as the rookie first-round pick (18) because the Jets have thrown the ball a league-high 156 times this season and there are just so many opportunities.

Conklin’s targets through three weeks have remained consistent — seven, nine and eight last week — and if he can keep his catch rate above 80% (it was 100% last week), he could be a fantasy starter for those who have been let down by some of the bigger names in the draft.

Maybe you drafted Dak Prescott and need to find a replacement. Or you believed Russell Wilson would have a rebirth in Denver. Nobody likes shopping and dropping QBs weekly in the hope that something sticks.

Though he’s got a difficult matchup against the Philadelphia Eagles and isn’t ranked high by our model this week, Lawrence might be the answer for you down the road. He’s rostered in 50% of leagues on ESPN, but is QB10 through three weeks.

Lawrence is fulfilling the promise that saw him selected No. 1 overall in the 2021 NFL Draft. After a disastrous rookie season, Jacksonville hired Doug Pederson and signed Christian Kirk to help their franchise QB. So far, it has worked. The Jags (2-1) snapped an 18-game road losing streak on Sunday by beating the Los Angeles Chargers.

Lawrence has an 85.8% well-thrown percentage (eighth in the league) and 82.1% of his passes are catchable (sixth in the league). As confidence continues to grow, Lawrence, Christian Kirk, Zay Jones and Travis Etienne Jr. could be part of a special offense that surprises a lot of people.

As an extension to Trevor Lawrence consideration, Jones is proving to be a reliable option too. Lawrence and Jones are building quite the connection. Jones had 85 yards on Sunday against the Chargers on 11 targets and 10 receptions. His eight burns were second to Marquise Brown of the Arizona Cardinals last week.

Those targets were enough to place him sixth among all wide receivers in Week 3, though nobody in that top group had a better burn percentage than Jones at 72.7. He is rostered in just 8.6% of leagues and is WR31 so far this season. Even as a Flex play, there’s upside here.

Kirk, the Jaguars’ No. 1 receiver, has just three more targets than Jones.

Seahawks head coach Pete Carroll said he needed to have more faith in Geno Smith to air it out. We haven’t really seen that transpire with just 103 passing attempts through three weeks. It is 63% of their offensive snaps, but a paltry number in relative terms. It’s the same amount of times the Pittsburgh Steelers have asked Mitch Trubisky to throw the ball.

Dissly has only seen eight targets come his way, but two of his catches were touchdowns. Smith has only thrown nine passes in the red zone – one of the lowest figures in the league – and two of them have gone to Dissly, who has two TDs in three games.

Dissly is only projected for 1.4 catches and 12.0 yards with a 10.2% chance of catching a TD this week, so we’ll keep monitoring this situation for now.

The Ravens are fun. I’m not sure how much stock you’re willing to put in a player who relies on big plays for fantasy value, but Duvernay is WR10 in fantasy scoring so far this season.

After Rashod Bateman, who has 16 targets, Duvernay is second among Baltimore wide receivers with eight. Obviously, the tight end position plays a major role in the passing game: Mark Andrews leads the team with 31 targets, while Isaiah Likely has 11.

Duvernay has eight catches on those eight targets and 121 yards receiving with three touchdowns. He has to be given some consideration.

This is not a very reliable group. Sterling Shepard suffered an injury on Monday night and the initial reports are a torn ACL. Shepard not only leads the team in targets (14) and receiving yards (154), but he’s also tied for second in receptions (13).

Richie James Jr. is the player most likely to see an increase in targets and receptions. The former San Francisco 49er is second on the team in targets and third in rushing and receiving touches behind Saquon Barkley and Daniel Jones. After them, it’s Shepard and then a massive fall off to Matt Breida with seven touches.

Will Kenny Golladay reemerge in New York? Someone will emerge from the current situation as the team’s most reliable receiver, we’re just not sure who yet.