California Dreamin': Is Moses Moody Ready to Step Into a Key Role With the Warriors? | The Analyst 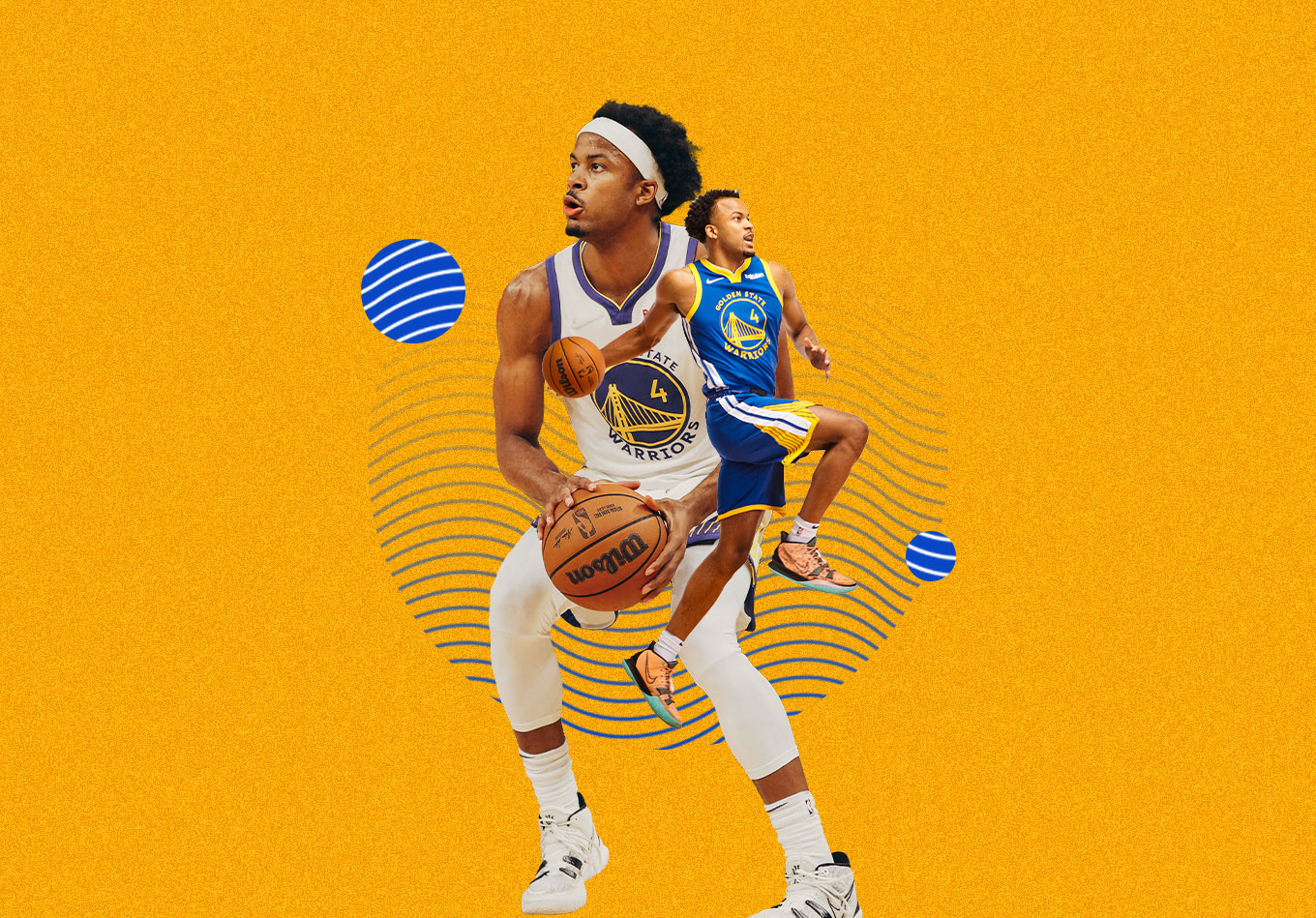 Last summer, the Golden State Warriors revitalized a once-depleted and incongruent reserve unit by signing Otto Porter Jr., Nemanja Bjelica, Andre Iguodala and Gary Payton II. All of them, in some capacity, aided the Warriors’ efforts to reclaim their springtime glory of a title in 2021-22.

A few months later, for reasons both in and out of Golden State’s control, all of them are elsewhere (Iguodala might be back eventually).

To supplement the production of those veterans, the Warriors added role players like Donte DiVincenzo and JaMychal Green. Outside help is not the lone or primary way they are seemingly aiming to fortify the bench, though. Their trio of 2020 and 2021 lottery picks all project to garner increased responsibilities as well.

For the past few years, Golden State has sought to tiptoe the fragile balance between the present and future, and the convergence of those timelines will likely be accelerated this season. Among that trio of recent lottery selections slated to see more minutes is Moses Moody, the 14th pick of the 2021 NBA Draft.

Don’t let the quiet statistical production from Moody’s NBA stint deter you. He tended to play a background character and seldom found shots or touches for stretches. The tape, however, paints the portrait of a 6-foot-5 19-year-old (he turned 20 on May 31) primed for a dynamite sophomore campaign on a team looking to stay perched atop the league’s summit.

Moody’s versatile abilities off the catch were eye-popping in Year 1. He appeared exceptionally adept at attacking closeouts in a variety of ways, finishing around the rim (61.5% clip), pumping the brakes to loft in floaters or facilitating against scrambling defenders. Although prone to the occasional record-scratch or cumbersome moment of hesitation, he was overwhelmingly decisive and discerning in these scenarios.

Closeout-attacking proved to be an NBA-ready skill from the jump for him.

A 19-year-old guard being this comfortable is uncommon. Attacking closeouts with such regularity and positive impact is a challenge for any ancillary player, let alone someone navigating their first season in the Association.

You have to calibrate rhythmic footwork for pull-ups, runners or layups. You have to avoid oncoming defenders looking to disrupt your handle via stunts, digs and rotations. You have to identify the ideal finishing angle in typically crowded areas. You have to diagnose on the fly the ripple effect of a fruitless closeout and land on the proper choice. There’s so much to process in quick succession and Moody already reliably does it aptly.

The final clip included above was Moody’s first regular-season game. He entered the contest three minutes prior and wasted scant time recognizing Anthony Davis’ closeout left the baseline vacated before scoring inside. Rookies drafted outside the top 10, maybe even the top five, aren’t usually operating with such credence in their decisions at that moment, especially when Anthony Freakin’ Davis is bounding toward them.

Moody routinely drew hasty closeouts because of the shooting credentials he established. Over 60% of his field-goal attempts came beyond the arc and the dude always holsters a prompt trigger. Timely contests don’t deter him; he’ll simply rise over the top and fire. He’ll launch off of screens and handoffs, and on the move. Inconsistent playing time never diminished belief in his jumper.

During the few games he did factor prominently into the offensive hierarchy, he was aggressive hunting his looks. He flashed tangible promise about the prospects of developing into a high-level, malleable wing shooter, an extension of everything his past few years of film have underscored. Pair that with his perceptive, purposeful cutting and Moody’s off-ball scoring package is bountiful.

Moody’s multifaceted off-ball arsenal is a concordant repertoire in Golden State’s motion-heavy, read-and-react scheme. Not only can he thrive as a scorer, driver and passer when afforded opportunities, he knows how to help amplify those opportunities with his movement and decision-making.

He is a different player than All-Star Andrew Wiggins, but many of the reasons Wiggins excelled last season (cutting, off-ball shooting, slashing) are similar traits to Moody, even if Wiggins is naturally more developed in those facets currently.

Moody’s 2021-22 is a classic example of steals and blocks being an incomplete or faulty barometer for defensive prowess. Despite garnering just 17 combined steals and blocks throughout his 607 regular season minutes (1.0 per 36 minutes), the rangy wing continually impressed. His off-ball positioning and awareness were exquisite.

By aggressively closing out on voluminous, prolific shooters and stopping short against downhill-inclined scorers, he clearly read and digested the scouting report for opposing personnel. He applies his 7-foot-1 wingspan to deflect or alter passes and contest shots all over the floor.

How he tangoed between ball and man away from the action so proficiently was startling. He tracks off-ball movement well and utilizes his hands to frustrate assignments without the latter necessarily reflected in the box score.

The last play is my favorite. In preparation for LeBron James’ post-up, Moody shades help, while keeping an eye on Avery Bradley on the right wing. As Bradley starts to relocate, feigning an Iverson cut to the strong-side, Moody instructs Klay Thompson to slide into help. Once Bradley darts in, Moody covers him and denies Russell Westbrook a passing outlet, which leads to a three-second violation. Rookies are not executing all those duties in a 15-second span.

The awareness, the positioning, the communication, all of it is ridiculously advanced for a young player, particularly one who’s yet to register 750 NBA minutes.

Moody’s on-ball defense is harder to praise. He’s fairly stiff and slow, and core strength is an important area to address. Many scorers zoomed around him or plowed through his chest. Adapting to Golden State’s switch-heavy – but not always – approach was an arduous course of learning, yet I’m pretty confident everyday playing time next season will alleviate this shortcoming. He seemed confused on when to switch. That’s the sort of hurdle he can iron out easily as he assimilates further, I’d wager.

The on-ball defense might require a longer, more pronounced focus, though is not irredeemable by any means.

Without watching every single Warriors game last season, deciphering the caliber of player Moody hinted at becoming was tough. The flashes sprung up and I had a broad feel for who he was (pre-draft scouting aided me). But we’re talking about a rookie who played more than 10 minutes just 27 times, 15+ minutes 21 times and 20+ minutes 13 times in 104 games (regular season and playoffs).

The sample was, uh, limited. For reference, his first-year peer, Jonathan Kuminga, hit those quotas 55, 44 and 31 times.

A study specifically on Moody only expanded my optimism and emphasized the mature nature of his skill-set in valuable facets. He’s a good, flexible shooter who can leverage that jumper into grander contributions. His off-ball defense is technically refined like few other wing defenders his age in recent years.

As he steps into an upgraded role next season, he’s going to illuminate these concepts to a wider audience and help ease the loss of Golden State’s veteran bench core.