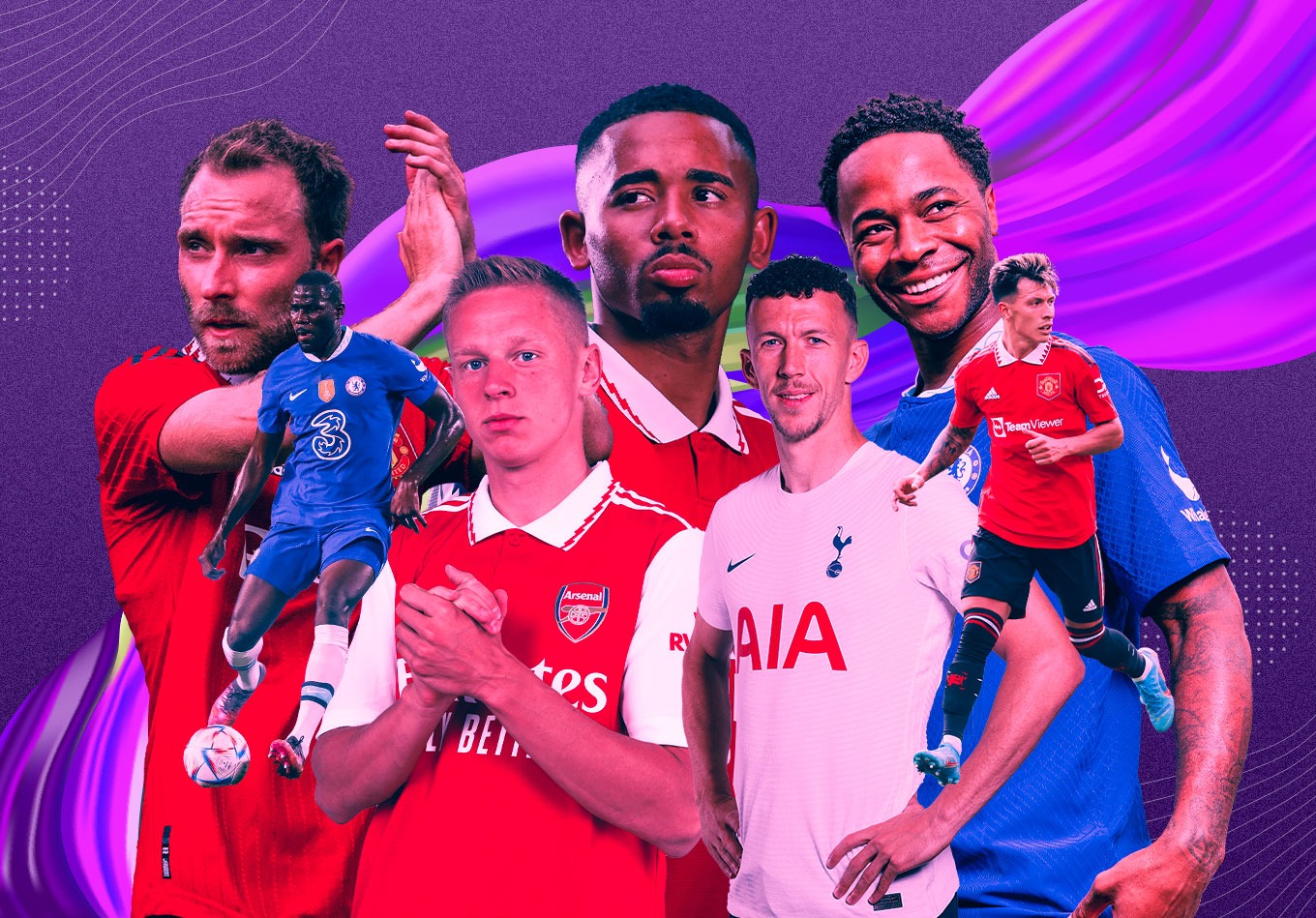 Summer Shopping: How New Signings Can Help the ‘Rest’ of the Big Six Close the Gap on City and Liverpool

Manchester City and Liverpool are untouchable. Their duopoly of the Premier League hit the half-decade mark in May and seems almost certain to continue for another year. But all is not lost for the rest of the division. There are signs this summer that the other four of the Big Six can begin to claw their way back.

For starters, new strikers could prove initially disruptive to each of the top two, with Erling Haaland’s transfer in particular likely to cause teething problems. Then there’s the World Cup, rudely plonked in the middle of the domestic calendar and set to wreak havoc in unprecedented ways. It seems likely that the points tallies of Man City and Liverpool will be a little lower this year, and it might just coincide with notable improvements just below them.

The other four big-hitters have pulled their socks up, each adding intelligently to their squads thanks to the sort of competent and aligned transfer strategies that haven’t exactly been hallmarks of Chelsea, Manchester United, Arsenal, and Tottenham Hotspur in recent years. In celebration of that fact, and in anticipation of a possible narrowing of the gap this season, here’s how the two best signings from each of the ‘other’ four will improve their team.

The influence of Pep Guardiola on Mikel Arteta’s tactical beliefs, it turns out, is as absolute as we first assumed. Two-and-a-half years of analysing Arteta’s differences – the 3-4-3; the greater verticality in the final third; the improvisations after a poor run of form – were either accidental or temporary adaptations to the limitations of his team. As Arsenal improve, they look more and more like a carbon copy of Guardiola’s blueprint. Signing two Man City players is a pretty clear sign of that.

Gabriel Jesus and Oleksandr Zinchenko fill very specific gaps in this Arsenal team, and in fact, as the following graphic indicates they will seek to give Arsenal Guardiola-style control of the two areas in which they are currently struggling:

A major roadblock for Arteta has been converting promising phases of play in the middle third into chance creation, or in other words, turning those energy-surging one-twos between Bukayo Saka and Martin Ødegaard into overloads in the final third. Jesus’ link-up play, far more consistent than Alexandre Lacazette’s, should create a third point of the triangle in these moments:

He’s clinical, too. Since joining Man City he has averaged a goal or assist every 107 minutes, the fourth best of any player to play at least 5,000 minutes of Premier League football in that time. He should also help Arteta’s high-press, having completed the second most tackles per 90 (0.9) and won the third most duels per 90 (5.4) of forwards in the Premier League since his arrival in 2017. Notably, Arsenal ranked 14th last season for pressed sequences (521), something they need to improve to achieve greater consistency.

Zinchenko brings metronomic control; a technical artistry and geometric reading of the game that is pure Guardiola, reflected in the fact he completed an average of 76 passes per 90 in the Premier League last season, the most of any full-back to have played at least 900 minutes. They need his smart passing under pressure, because, surprisingly, last season Arsenal had fewer 10+ pass sequences and fewer build-up attacks than Tottenham Hotspur.

Of particular significance is Zinchenko’s versatility and history as a central midfielder, meaning he can offer Arteta the chance to deploy Guardiola-esque inverted full-backs – gaining greater control of the midfield battle.

Sterling & Koulibaly Will Speed Things Up

Look over to the Stamford Bridge touchline and more often than not you’ll see Thomas Tuchel waving and screaming with the frantic energy of a man warning beach-dwellers of a shark attack. He demands his players get the ball forward as urgently as possible by cutting through the lines at every turn. Most of the time he’s left frustrated, his forwards coming towards the ball or his midfielders passing sideways. As the graphic shows, Chelsea aren’t currently very direct:

New chairman Todd Boehly has reportedly given Tuchel greater control over transfers, and it shows. Raheem Sterling has a bustling makes-stuff-happen energy that seeks to pierce defences over and over again, making runs in behind and dribbling directly at players; he has recorded the most successful take-ons inside the box (82) in the Premier League since 2017-18, and last season he made the fourth-most off-ball runs into the area. As the below graphic illustrates, only Jack Grealish and Mohamed Salah carried the ball into dangerous areas more often than Sterling last season:

He is also more of a playmaker than is often assumed, creating more chances inside the box (123) than any other Premier League player since 2017-18. Not unlike Jesus at Arsenal, Sterling’s brilliance has perhaps been hidden by the quality of those around him at Man City.

Kalidou Koulibaly is a direct replacement for the progression and directness Antonio Rudiger provided, except where Rudiger used passing, Koulibaly breaks the lines in the dribble. The new Chelsea centre-back is in the 96th percentile for completed dribbles per 90 (among central defenders in the top five leagues), whereas Rudiger was in the 87th percentile for progressive passes per 90 among the same sample.

A gruelling summer workout should turn Tottenham Hotspur into a proper Antonio Conte team: immaculately drilled from a tactical perspective and super fit. Just as important are the two signings that complete his 3-4-3, because without specific skill sets in the wing-back and central midfield positions Conte’s unfashionable rejection of high-pressing football (their 13.2 PPDA was the fifth lowest in the division last season) leaves Spurs a little stuck.

Conte sits his team in a lower block than most elite managers, partly to compress space between the lines for defensive solidity but mainly to draw the opponent onto his team, creating ‘artificial transitions’; build-up attacks that look a lot like counters. For this to work you need press-resistant midfielders capable of dealing with the pressure and wriggling out of trouble, which is something Spurs lacked last season – hence the number of times they seemed to amble around, trapped in their own half.

This explains why Pierre-Emile Hojbjerg was the fourth-most pressured player in the division last season as opponents were encouraged to push onto Conte’s team. Yves Bissouma doesn’t play many progressive passes but he is an excellent carrier of the ball, completing 1.45 dribbles per match last season to put him in the 84th percentile among midfielders in the top five leagues.

It will also come in handy that among all midfielders in the top five leagues last season Bissouma ranked fifth for tackles (3.2 per 90) and third for interceptions (2.1 per 90).

The second issue was a lack of width in attack. Tottenham’s average width per attacking sequence last season was the ninth highest, making them narrower even than the likes of Norwich City, Wolves, and West Ham. Conte’s system requires the wing-backs to push up and act like wingers in order to cross the ball into the box, and in Ivan Perisic – converted by Conte himself – he has the perfect player to do so.

Perisic created the most chances following ball carries in Serie A last season (26), but even more impressive are his stats compared to all full-backs/wing-backs in the big five leagues: he had the second most goal contributions (15), created the tenth most chances (57), and ranked sixth for total open-play crosses (149).

Manchester United’s pre-season games have shed some light on Erik ten Hag’s plans. The basic idea is patient possession at the back with long build-up sequences followed by free-flowing directness in the final third – with Anthony Martial, Jadon Sancho, and Marcus Rashford interacting well together so far. His biggest concern is finding players with the technical ability to play in such a complex system of positional interchanges, meticulously-planned triangles, and sudden changes in tempo.

Christian Eriksen was a no-brainer on a free transfer. We all know how elegant he is in possession, picking up the ball in the half-spaces and shuffling it on to great effect. He created 2.9 chances per 90 for Brentford last season, more than any Man Utd player, and ranked third overall – behind Thiago Alcantara and Trent Alexander-Arnold – for passes into the final third per 90 (12.9).

Lisandro Martínez is known to be a little erratic defensively, but he has been signed by Ten Hag for his ball-playing qualities with his left foot (particularly rare among centre-backs) and capacity to begin moves for United by cutting smart passes through the lines. He ranked third among centre-backs in the Eredivisie last season for forward passes per 90 (30.8) and second for passes into the final third per 90 (13.4). He is a progression monster too, ranking in the 98th percentile for progressive passes per 90 (5.8) and in 100th percentile for progressive carries per 90 (15.8), among central defenders Eredivisie.

Manchester City and Liverpool are still dominant, and this season won’t change that. But it might mark the beginning of a reshift in the power structures at the top of the table.