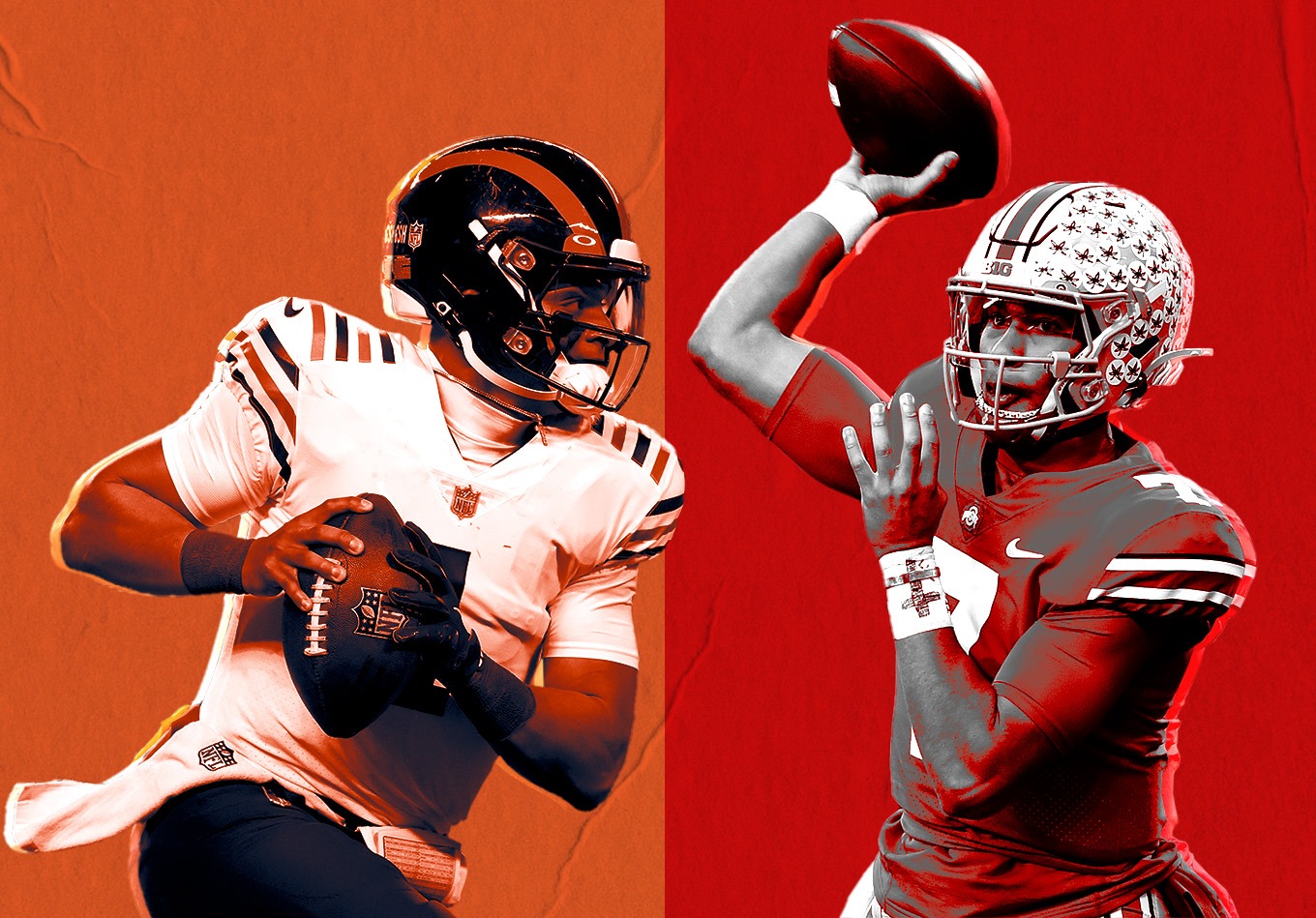 There’s no doubting the stigma that exists when it comes to quarterbacks from The Ohio State University.

While there’s really no merit to it, especially given only three have been coached in a Ryan Day offense, there are two that already receive plenty of scrutiny.

After slipping to the 12th overall pick in the 2021 NFL Draft and playing through a tough season with Matt Nagy at the helm in Chicago, Bears and former Buckeyes QB Justin Fields has many already counting him out (despite gobs of evidence in terms of linear improvement during his rookie year).

During his time at Ohio State, Fields was the Big Ten Player of the Year and named a finalist for the Heisman Trophy in 2019. He then followed that up with his second straight Big Ten Offensive Player of the Year Award and a national championship run that ended in a loss to Alabama in a shortened season.

The timeline is fairly similar for their current quarterback as C.J. Stroud enters his second year as the starter in Columbus after a redshirt freshman season when he was also named the Big Ten Offensive Player of the Year and ended with an appearance as a Heisman finalist.

With a similar success and immense talent, but also shared scrutiny from the public based on the college helmet they shared, is it fair to use Fields as a tool to analyze Stroud to as he enters his redshirt sophomore season?

There’s certainly merit to seeing where Stroud was in his first year compared to Year 1 for Fields in 2019, and there is some value in looking at the jump Fields made from his first to second year. This gives us an indication of where Stroud is under Day, and what a realistic jump could look like for him.

This isn’t debatable as he’s already one of the top athletes at the position at the NFL level. It’s rare to find someone of Fields’ stature who is capable of running a sub-4.4 40-yard dash. Fields is up there with the Lamar Jacksons and Josh Allens in terms of overall tools and dynamic ability at the position.

Stroud certainly has mobility in his lower half. In fact, his first touchdown with the Buckeyes was a 48-yard run against Michigan State in 2020. However, there’s little doubt his dynamic playmaking ability is not on the same plane as Fields.

When discussing arm talent, it’s more comparable than lower-half playmaking ability, but Fields has the advantage there as well. And he does not only from a zip perspective and the ability to thread tight windows, but from the ability to manipulate throwing windows with arm angles as well.

Stroud has proven to thread footballs and throw opposite hash without any struggle, but Fields has more power in his arm.

One would be hard-pressed to find a more accurate passer than Fields was in 2020. To all levels of the field and on a consistent basis, Fields was on target throughout his junior season (even if it was only six games).

And this was an improvement from his sophomore season in 2019 when his WT% struggled to even reach 70% in any given context.

This is where Stroud’s incredible 2021 season begins to take shape. Comparatively to Fields’ first season as a starter, Stroud’s accuracy was substantially better. When operating within the design of the play, Stroud’s WT% hit a total of 80.3 on the year. Overall, Stroud’s WT% hit a mark of 78.24 – well higher than Fields hit in his first year (73.16).

Given how determined Stroud has been to remain poised in the pocket rather than attempt to use his legs and extend compared to Fields, Stroud’s 76.26 WT% against the blitz compared to Fields’ 67.52 in his first season adds up.

Overall, Stroud’s first year in terms of accuracy and placement put him ahead of where Fields was as a first-year passer.

In-Design vs. Out of Structure

This is where Stroud has the most room for improvement.

When faced with a blitz and pressure, when he is forced to throw on the run, and when he is forced out of design, Stroud’s pickable pass percentage (PKP%) skyrockets. Overall, Stroud has proven to be safer with the football than Fields was, but Stroud has to begin to use his legs to his advantage rather than attempting to stand in the pocket and wait for action to develop down the field.

Stroud proved capable of being safe with the football in-design, with a PKP% of just 1.49. Overall, his PKP% was just 2.78 on the season in 2021. However, when faced with pressure, that number jumped to over 5%, over 4% when on the run (compared to under 2% from Fields), and over 7% when forced out of structure.

Stroud and Fields are going to get compared endlessly given where they’re from, and the stigma attached to quarterbacks from Ohio State. But stylistically, there’s not much there to make the argument that Fields should be used as a metric of comparison when evaluating Stroud.

Fields was a player who tended to hang onto the ball longer as he used his legs more. He was a player that was a little riskier with the football and went for the big play when he saw the opportunity. Stroud is a bit more down-to-earth and willing to keep the football safe above all else. While he has the legs, he was proven to hang in the pocket and let his receivers work down the field.

So while there are merits to seeing where Stroud and Fields match up and where they differ under Ryan Day as passers, their skill sets are not similar enough to lump them together. Fields possesses better tools, both in his arm and his legs, which gave him a bit more freedom to operate outside of structure than Stroud has provided. It’s an area in which Stroud needs to improve as he returns to Ohio State in 2022 with hopes and high odds of being the top player selected in the 2023 NFL Draft.

If we have to force a square peg through a round hole, the metrics say that Stroud is ahead of where Fields was as a proficient passer after their first years as starting QBs at Ohio State. But then, Fields took another jump in his second year under center.

As Stroud enters the 2022 season as perhaps the top passer in the nation, there’s no reason not to expect the same kind of jump. If that happens, he could very well be ahead of where Fields was after Year 2 with the Buckeyes.