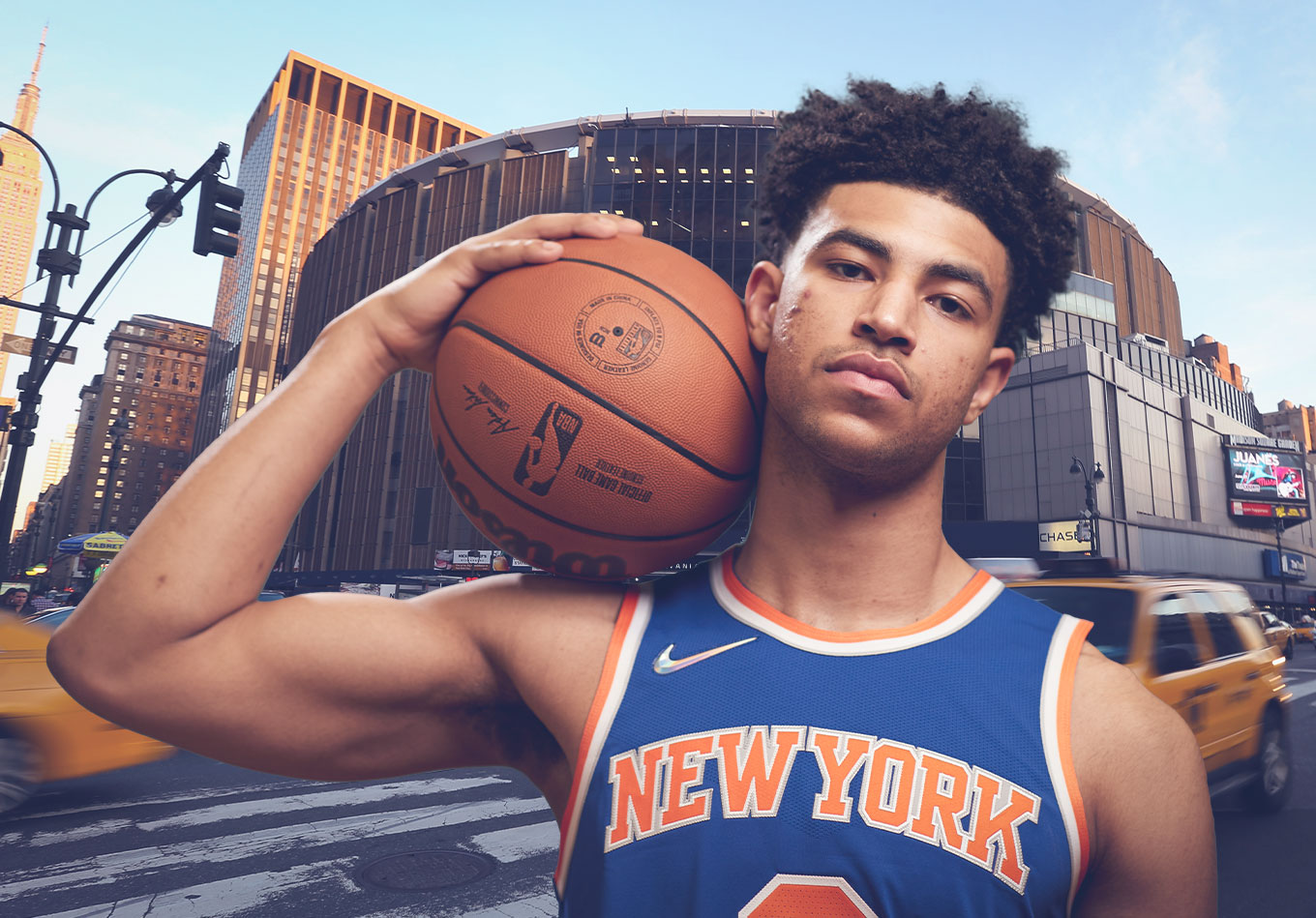 After finishing fourth in the Eastern Conference during a resurgent 2020-21 campaign, last season was not kind to the New York Knicks.

A few bright spots glimmered through, as they do for any team every year. New York’s trio of 2021 draftees, Quentin Grimes, Jericho Sims and Miles McBride, flashed considerable promise to emerge as high-level rotation players in the near future.

Among that group, Grimes, who the Knicks acquired from the Los Angeles Clippers on draft night, looks to factor most prominently in the rotation, both immediately and long-term provided he’s not used as a centerpiece of a deal to acquire Utah Jazz star guard Donovan Mitchell.

Thibodeau’s reluctance to grant young players hefty minutes quelled much of Grimes’ playing time. He only suited up for 46 games (a midseason injury contributed here) and ranked 10th in minutes for New York. When Grimes did see the court, however, he acclimated himself expeditiously and clearly resembled someone whose NBA tenure should be rather lengthy. The 2021 NBA Draft is abundant with talent. Grimes, who averaged 6.0 points on 56.5% true shooting, sits squarely among that broad label.

Most prominently, his defense popped from the outset. He looks like a player who could garner All-Defensive consideration at various points in his career. Entering the league as a three-year college player assuredly helped accelerate his defensive learning curve, but the dude is simply an superb defender regardless.

At the point of attack, he’s lively, strong-chested and a jittery lateral mover. By prepping for picks ahead of time and angling himself to fight over the top, he often seamlessly maneuvers around them. With his 6-foot-5 frame, he applies his size to fluster scoring pursuits. His balance and dexterity empower him to crowd opponents’ handle and stymie dribble handoffs.

New York entrusted him with some pretty substantial on-ball assignments. Yet he’s also proven versatile enough to toggle over to the role of chaser, where he erases off-ball actions and tethers himself to assignments by continuing to shed screens like second nature. He’s overly jumpy or aggressive at times – prone to being duped by shot fakes and savvy dribble moves or overextending himself on the ball. But those are minor faux pas in a universe full of superlatives.

He’s not easily dislodged by creators and maintains active hands to complicate passing, driving or shooting windows. Grimes’ 2.0 steal rate ranked in the 79th percentile among all players and his 0.7% block rate ranked in the 56th percentage among players under 6-foot-10. New York’s defensive rating was 5.7 points better per 100 possessions with him on the floor, in part because he regularly cobbled together stellar sequences such as these.

While the Knicks lacked viable point-of-attack options last season, perhaps a more pressing matter was insufficient communication and inattentive help defense. Grimes excelled in both regards. He might’ve been New York’s premier communicator and perimeter helper, which is overwhelmingly a testament to him, though collaterally an indictment of his peers. He crisply executes switches, almost always picks up someone in early offense and coordinates decisions like a veteran stalwart.

Grimes’ closeouts are masterfully punctual and disciplined. He’ll recover to his man without conceding any sort of advantage or allowing them to extrapolate one. His off-ball positioning is consistently brilliant. Excellent defenders have a tendency to mask their excellence in the mundane, which is a hallmark of Grimes’ exploits.

He’ll dance between man and ball, jetting into timely help and recovering if the action veers back toward his assignment. His astute positioning subtly curbs drives, shots and passes – and his decisions as a defender are succinct. The things that didn’t happen when he was on the floor were a routine testament of his aptitude, just as much as what did transpire.

People generally associate ground coverage with mobile bigs or sprawling wings, but Grimes fits this mold as well at 6 feet, 5 inches tall. The court seems functionally smaller for offenses when he’s out there.

Grimes’ rookie season defense was so stellar that the usual progress young players enjoy will suffice in the coming years. In fact, he ranked second on the Knicks with a plus-1.6 DELTA, which is the difference in DRIP (our projection of a player’s contribution to a team’s plus-minus per 100 possessions) from the beginning to the end of the season.

Should Grimes remain in New York, Thibodeau embracing him as an integral part of his rotation is vital, too. More than any internal shortcoming, his lack of playing time muted his defensive impact last year. Rectifying that will both improve New York and accelerate Grimes’ development.

Where his room for growth upon an intriguing package of skills largely exists is with the offense. Grimes shot 38.1% from beyond the arc as a rookie on more than 12 attempts per 100 possessions, besting his season projection of 37.0%. He holsters a snappy release, is comfortable firing from well behind the line and can set up teammates if he’s run off the line.

Whether it’s Utah or New York, I’d like his team to explore his utility as a screener and movement shooter because he squares his body toward the rim exceptionally fast and showcases tremendous balance. There’s much to like about his ceiling and potential versatility as a marksman.

After shooting 44.4% on corner 3s in Year 1 (see shot chart below), the next step is parlaying his confidence above the break into reliability, given he converted 36.1% of his non-corner triples. That’s a small hurdle, though, because the more relevant area is Grimes becoming comfortable putting the ball on the deck more frequently.

He’s acutely aware of his ball-handling limitations and does not venture outside of them often. It’s important to recognize those limitations, but they’re limitations nonetheless and suppress his offensive value.

Defenses respect his jumper, offering many hasty closeouts when the ball swings in his direction. He will attack closeouts, though almost exclusively into open space and extinguishes his dribble when defenders enter the frame. Despite the attention he induced as a long-range shooter, just 9.8% of his shots (23 total) occurred at the rim.

If the handle does not reach a level that can spike his rim frequency, the aim should be for Grimes to incorporate an effective one- or two-dribble pull-up after defenders skate past. He took 43 such attempts last year (making 41.9%) and appeared fairly comfortable in the processes of those shots.

If he can’t trust the handle in traffic, at least finding an avenue to trust this type of off-the-bounce shooting is critical for his offensive maturation. Right now, the scope of his offense is narrow, but it doesn’t always have to be.

He’s a good shooter who acts decisively with the ball in his hands, can make plays against a closeout and has even exhibited some pocket passing proficiency in specific settings. The problem is his handle is so cumbersome that consistent services beyond the 3 are tenuous currently. Working around that flaw or eradicating it could certainly amplify his facilitating chops.

Fortunately, he’s looked more adept as a handler during the NBA Summer League, which could be an encouraging harbinger come October (yes, I know the caliber of opponent does not compare to regular-season games). The Knicks’ dearth of high-level passers constricts when others feed Grimes for quality looks, so a lesser dependance on the suboptimal offensive context is an ideal objective for any player.

At a minimum, Grimes deserves 20 minutes per game next season. There’s a legitimate and maybe even logical case that he should start. New York needs versatile perimeter defenders who can restore its cohesion of 2020-21. Utah needs promising young players to rebuild around. Grimes fits the mold in both situations and is best deployed offensively around a club’s foremost offensive talent, which is what the starting unit would probably offer.

On and off the ball, with the malleability to plug a vast amount of holes, he’s truly a standout defender. Only two months removed from his 22nd birthday, Grimes is embarking on the initial stages of a prosperous NBA career. The tape illuminates this truth.