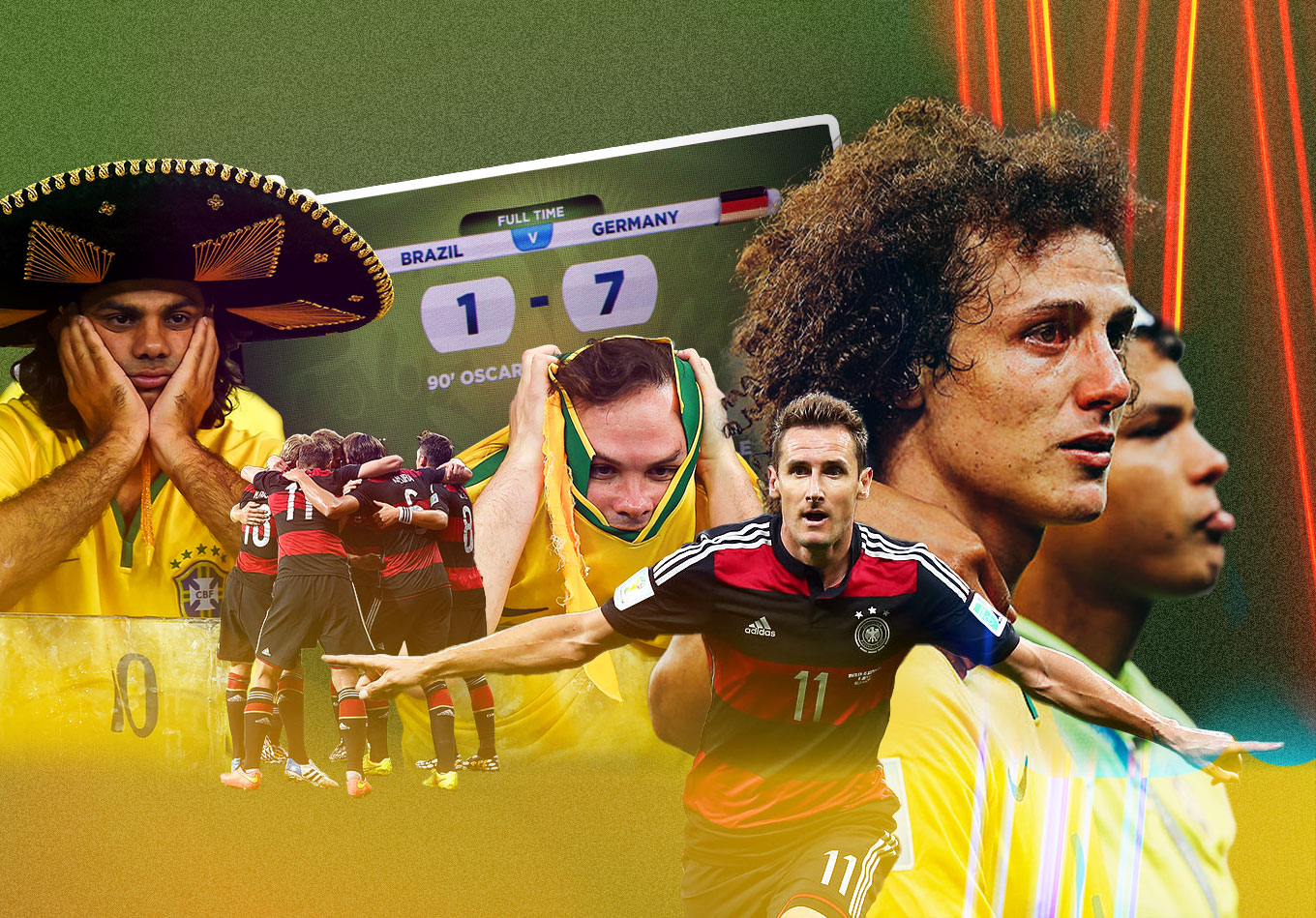 About That Game is a series looking at the data stories underpinning classic matches. This edition looks back at Mineiraço: Agony of Mineirão, in which Brazil suffered a humiliating 7-1 defeat to Germany on their own turf in the 2014 World Cup semi-final.

The 2014 Men’s World Cup saw Brazil host the tournament for only the second time, following the huge disappointment of 1950. Infamously Brazil suffered an unlikely defeat to Uruguay in the decisive match of the final round when they only needed to draw the game to win the trophy in the Maracanã. This was the chance to finally lay that persistent ghost to rest, 64 years later.

Ahead of 2014, there is unlikely to have been another team under as much pressure going into a tournament as this incarnation of the Seleção – they either had to win or be branded as failures. On the eve of the tournament, coach Luiz Felipe Scolari stated that “there is no other objective we are interested in.” Unfortunately for Brazil and Scolari, their mission ended in spectacular failure.

Scolari had already won a World Cup title with Brazil in 2002, before returning in November 2012. Many saw his return to the Seleção as pure populism, but after a shaky start, the experienced coach had led Brazil to the 2013 FIFA Confederations Cup title on home turf, while his side had suffered just one defeat in 15 matches leading up to this semi-final with Germany – even that was a non-descript friendly away at Switzerland just under a year before.

The match would be the fourth successive major tournament semi-final for the Germans, but the two of those that came in World Cup finals (2006 and 2010) saw them lose to Italy and Spain respectively.

Joachim Löw’s side arrived in Brazil as the second-best men’s team in the world based on the FIFA Rankings – with only Spain ahead of them. The Spanish had already exited the tournament in embarrassing fashion, finishing third in their group and only managing to beat Australia in a dead rubber. Brazil may have been feeling the pressure from the home crowd, but Germany had pressures of their own as the best team left in the competition on paper.

Brazil hadn’t suffered a competitive defeat on home turf in 39 years, since losing 3-1 to Peru in the 1975 edition of Copa América – a run of 62 consecutive matches without losing. That was about to change in the most humiliating fashion possible.

Brazil were without two of their most important players for this semi-final. Thiago Silva had to sit out following a stupid booking in the previous round, for obstructing Colombia goalkeeper David Ospina as he attempted to take a kick, but the most damning exclusion was the poster-boy of Brazilian football, Neymar.

Neymar had suffered a painful injury against Colombia in the previous round, with defender Juan Camilo Zúñiga’s knee smashing into his spine, leaving the star with a broken vertebra.

When the teams came out on to the pitch, Neymar’s absence was highlighted by players holding a shirt with his name on it for the pre-match anthems and photos in a weird display to their injured teammate. At the time, this felt like a psychological victory for their German opponents, with Brazil seemingly in a bizarre form of mourning for their teammate’s unfortunate injury. Mourning was much more justified a few hours later, after Brazil had been destroyed on the pitch.

For Germany, it was rumoured that Miroslav Klose would drop to the bench following a meek display in his only previous start at the tournament, an uninspiring 1-0 victory over a poor French side in the quarter-final. Klose had scored his 15th World Cup goal in the group stage against Ghana and needed just one more to overtake Ronaldo and become the outright top scorer in men’s World Cup history. When the line-ups were announced and Klose was included in the XI, he knew that this might be his last chance to do so – and in front of Ronaldo himself, who was sat in the Estádio Mineirão stands.

When the game began, Brazil came flying out of the traps. Wanting to please an expectant home crowd, they surged forward from kick-off and won a corner within 37 seconds. That would be as good as it got.

From Germany’s first corner in the 11th minute, Thomas Müller was left completely unmarked to side-foot the ball home for the opening goal of the game from just outside the six-yard box. The versatile German was supposed to be marked by David Luiz, but the defender completely lost track of his man – with an additional block from Klose helping out – and never recovered. This continued to be the case for the remaining 79 minutes.

This was Müller’s 10th and, as it stands, final World Cup goal, with the German failing to score in the final or the three matches that his nation played in the 2018 edition. There’s a good chance he’ll make the German squad for the 2022 finals and will be looking to match Jürgen Klinsmann’s tally of 11 World Cup goals for Germany – only Gerd Müller (14) and Klose (16) have scored more in the tournament history for the nation.

Müller’s strike was also Germany’s 2000th goal in international men’s football – they’d go on to celebrate that feat with six more across this game, including four in a devastating spell of six minutes and 41 seconds – all before half-time.

Germany’s second goal would see Miroslav Klose break the record he was after, moving one ahead of Ronaldo to 16 World Cup goals. This was his 71st and last goal for his country, with his World Cup goals counting towards 22.5% of his total for Germany and more than he scored in qualification games for the tournament across his career (13).

Toni Kroos scored twice in the space of one minute and eight seconds to put Germany 3-0 and then 4-0 ahead on the night. Between his brace, Germany only held possession for four seconds – with Kroos stealing the ball from Fernandinho, before exchanging passes with Sami Khedira and slamming the ball past a dumfounded Júlio César in the Brazil goal. It would be Khedira himself who added the fourth only three minutes and 43 seconds later, finishing after yet another astonishingly horrendous defending exhibition from Brazil.

Between the 20th and 30th minute of the match, Germany completed just 25 passes but attempted six shots and scored from four of them. It was a devastating display of attacking football, leaving Brazilian players and fans utterly shellshocked.

In the history of the men’s FIFA World Cup, the only other teams to have found themselves five goals down at half-time are Zaire (to Yugoslavia in 1974) and Haiti (to Poland in the same year); this is not the kind of company Brazil are used to keeping.

The Germans showed more mercy for Brazil in the second half, but it couldn’t have been worse than the opening 45 minutes that saw the hosts raucously booed off by their own fans at half-time. Joachim Löw’s side took their foot off the gas, and yet still managed to increase the score to 7-0 thanks to a brace from substitute André Schürrle – the first, and so far, only German player to score more than once in a World Cup game off the bench.

Oscar’s late consolation for Brazil was irrelevant, if only to ruin a perfect day for the German defence as well as their attack.

7-1. Brazil’s worst nightmare had become a reality. It was their most emphatic defeat of any kind for nearly a century, since Uruguay beat them 6-0 in 1920, and this came on the biggest stage of all – at a World Cup finals tournament in their own country and in front of billions watching in disbelief at home.

Germany’s seven goals came from just 14 shots – 41 teams attempted more shots in a game at the 2014 World Cup than this. True, Germany’s expected goals total of 3.12 was the third highest in the tournament, but it trailed their earlier tournament performance against Algeria (4.3) where they attempted double the tally of shots (28) and scored twice.

Brazil’s defending in this 7-1 was nightmarish, but the Germans’ put in one of the most clinical finishing performances in World Cup history.

“Embarrassment, shame, humiliation,” read the front page of O Globo – they awarded every single Brazil player a rating of zero in the following day.

Unfortunately for the Brazilian players, they couldn’t just hide from the fury. They were wheeled out again just four days later for the game nobody really cares about: the third/fourth place playoff, against the Netherlands.

Another big defeat was played out, this time only 3-0, but still enough to ensure Brazil conceded more goals across the 2014 World Cup than any other host nation in the history of the competition (14).

Following the 2014 World Cup, 10 of Brazil’s players in the 2014 World Cup squad never played a single minute for their nation ever again: Júlio César, Victor, Dante, Maxwell, Henrique, Ramires, Hernanes, Bernard, Jô and Fred. Maicon was lucky not to make it 11, but played one more friendly post-tournament, before never pulling on a Brazil shirt again.

Striker Fred, who is from Belo Horizonte, was never a name to excite fans unlike previous strikers in the Brazilian national team. His indifferent form at the tournament, didn’t help – scoring just once from 12 shots in 471 minutes on the pitch at the 2014 World Cup. “When the match ended, I wanted to climb into a hole and never come back,” knowing that his poor form made him a target as the scapegoat. “I was booed at the Mineirão, my home. After the World Cup I was in a bad way, psychologically.”

Júlio César – the man who conceded the seven goals, struggled to come to terms with his role in the defeat. Following his retirement from international football, he stated “Even today, when I lie down, it’s inevitable that I think about it. I’m already imagining the day I die, years from now, when they announce on the news: ‘Júlio César, the goalkeeper in the 7-1, has died.'”

Brazil’s hangover continued across the 2015 and 2016 Copa América tournaments, with an uninspiring display in the group stage of the 2015 edition before crashing out to Paraguay on penalties in the quarter-finals, followed by an embarrassing group stage exit in the centenary tournament just a year later following a 1-0 defeat to Peru in their final group match.

Brazil have qualified for the 2022 World Cup, a record 22nd participation. As the nation to win the men’s competition the most often (5), they are always in the conversation as potential winners – potential possibly backed up by a solid 2021 Copa América performance and an Olympic gold medal for their under-23 side last summer.

Eight years after the ‘Agony of Mineirão’, they could go some way to exorcising the ghost of the 2014 thrashing against Germany, but the stain of that sorry day will never fully leave them.

You can watch extended highlights of the game here, or if you want to enjoy the full match in its entirety, FIFA have uploaded the match here.