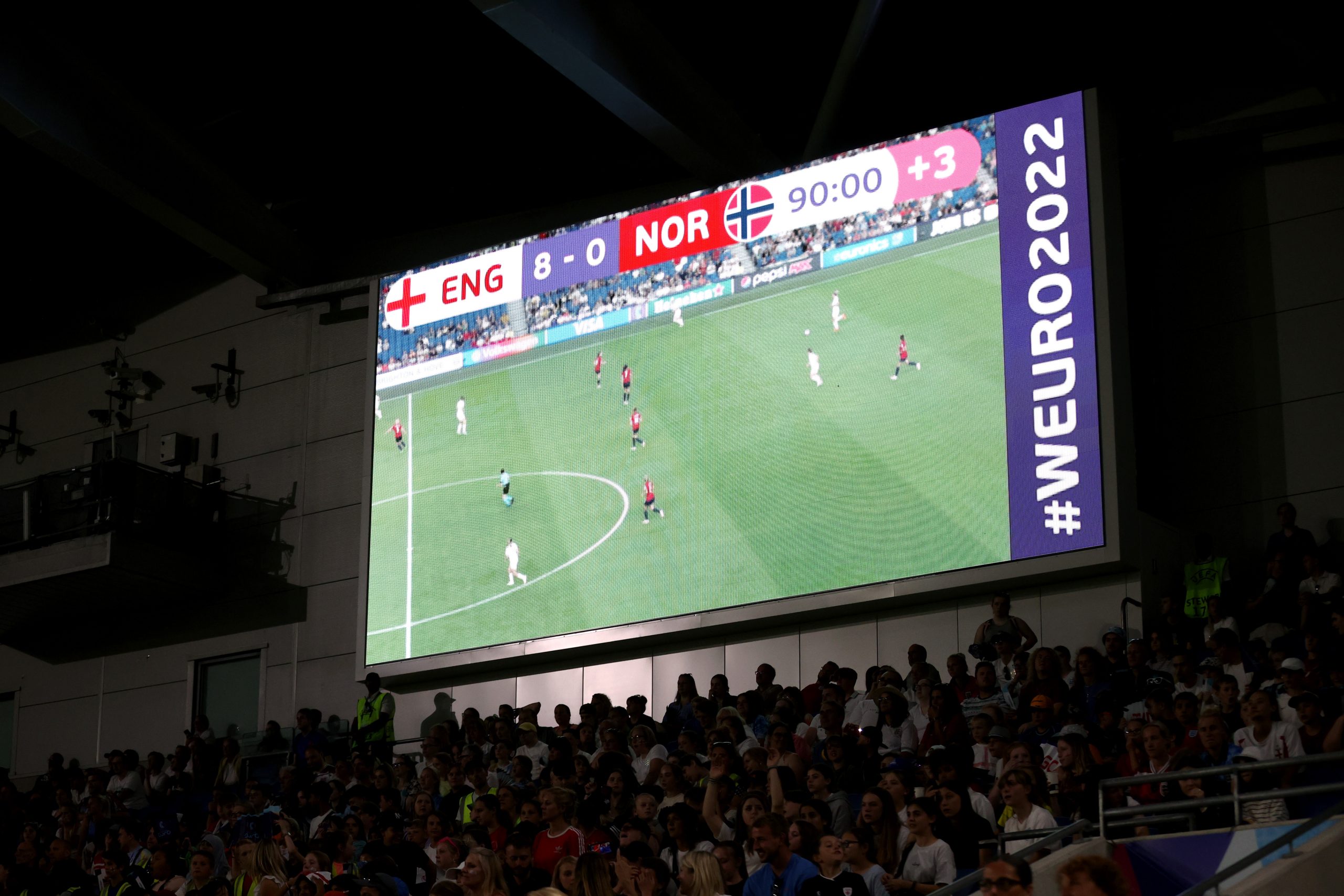 England destroyed Norway 8-0 in Brighton at the Women’s Euro 2022 last night, but how does it rank among the biggest Women’s Euro wins in history?

Early spoiler alert: it’s the biggest of all-time. England 8-0 Norway set the new record for the biggest margin of victory at a UEFA Women’s European Championship finals tournament, overtaking their own record from the 2017 edition.

Here, we look through each of the wins in tournament history by five or more goals.

England broke the European Championship record – both men’s and women’s – for the biggest-ever win in the history of the competition in their group stage game against Norway.

The 8-0 victory over the 11th best team in women’s football based on the FIFA rankings saw five of the Lionesses’ grab a goal, including a hat-trick for Beth Mead and two goals for all-time top scoring England women’s star Ellen White.

England’s eight goals came from an expected goals total of 6.90, with their 25 shots having an exceptional average xG of 0.28 – essentially meaning that the average shot conversion rate for each of their shots is historically 28%. Create great chances and goals will come.

It was 6-0 at half-time, with those six goals already enough to equal the biggest margin of victory at a Women’s Euros. That score was the biggest half-time lead in the history of the competition, overtaking France’s effort from the previous night (10 July 2022) against Italy, where they led 5-0 at the break before the Italian’s reduced the deficit in the second half in their 5-1 defeat.

The 8-0 win over Norway in 2022 broke England’s own tournament record at the Women’s European Championships, which originally stood at 6-0 when Mark Sampson’s side defeated rivals Scotland in their opening match of the 2017 tournament.

Scotland were playing in their first major tournament, and this was far from an ideal debut. Ellen White can boast of being the only player to score in both of the biggest wins in the history of the Women’s Euros with a strike in this game, while Jodie Taylor was the star for England with three goals. Her hat-trick was the first at a Women’s European Championship finals since 2 July 1997, when France’s Angélique Roujas scored all three goals in a 3-1 group stage win over Russia.

This 5-0 win for Norway over Denmark is best remembered for the individual performance of Marianne Petterson. Aged just 22 at the time, the Norwegian scored four goals – two in each half – and became the first player to score four times in a single match at a Women’s Euros. That record remains to this day.

Germany enjoyed a 5-0 win over Russia in the 2001 Women’s Euros on the way to winning the title in their own country.

Amazingly, this game was still 0-0 until the 43rd minute, when Bettina Wiegmann opened the scoring for the host nation. With the scoreline still only 1-0 at half-time, the Russians might have hoped for another shock result, after drawing with England 1-1 in their opening group game, but it wasn’t to be. Germany were rampant in the second period, scoring four more goals through Birgit Prinz, Maren Meinert and a brace from Sandra Smisek in the final 17 minutes.

Sweden enjoyed a 5-0 win over Finland as hosts of the Women’s Euros in 2013. It was their second group game, following a 1-1 draw against Denmark in the opening match, with this 5-0 rout enough to help them top their group and qualify for quarter-finals, before eventually being knocked out by Germany in the semis – the German’s going on to win another tournament.