How High Can Notre Dame's Michael Mayer Elevate His Game in 2022? | The Analyst 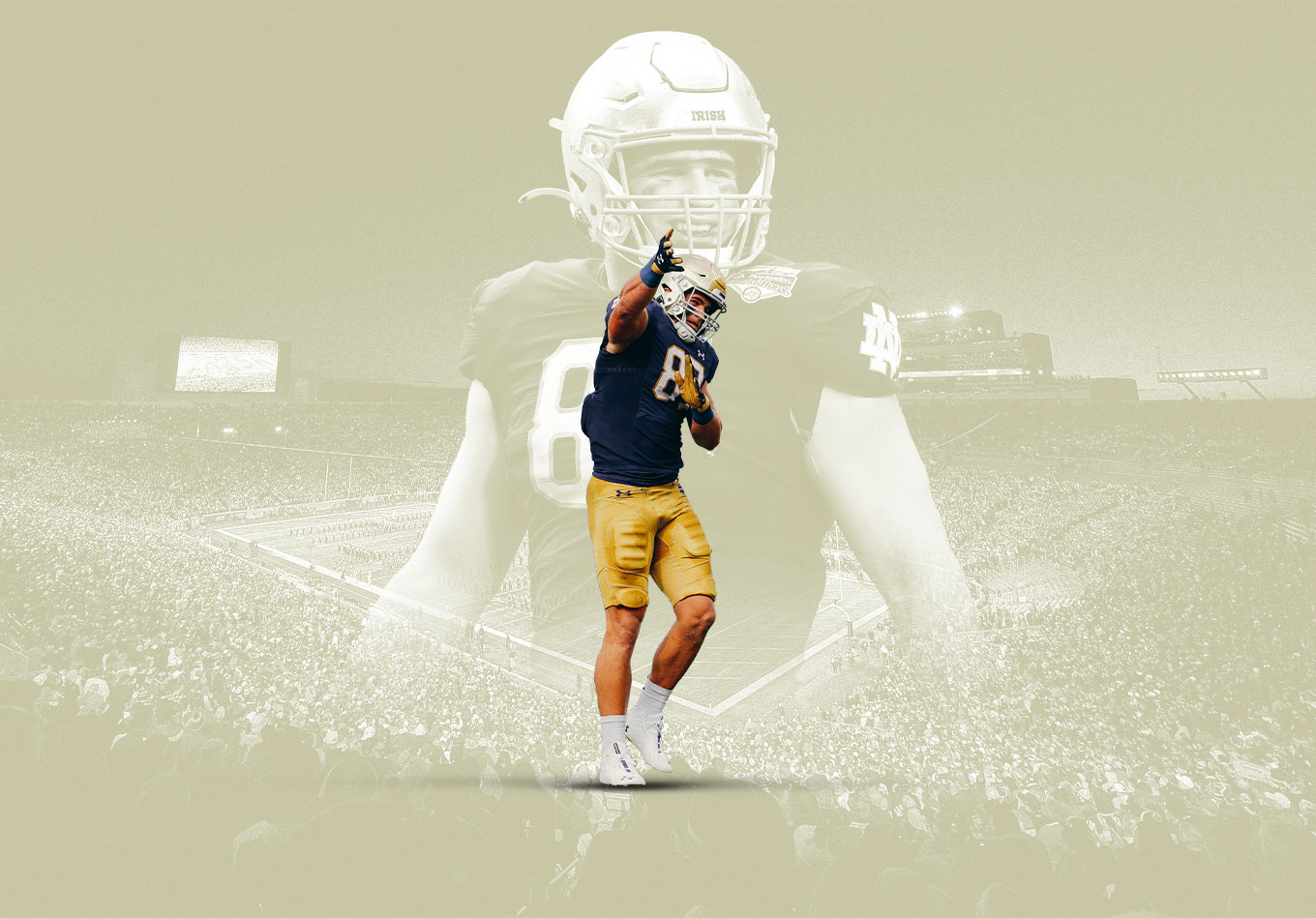 One of the top tight ends in college football over the past couple of seasons has been Notre Dame’s Michael Mayer.

Now entering his draft-eligible season, Mayer is out to prove he’s the top player in the class at his position – ahead of the Georgia duo Arik Gilbert and Darnell Washington and Iowa’s Sam LaPorta.

A year ago, Mayer racked up 840 yards and seven touchdowns on 71 catches for the Fighting Irish. He averaged about 12 yards per catch, and eclipsed 100 yards in two games.

The 6-foot-5, 250-pound Mayer now looks to take another leap in 2022 as he catches passes from Tyler Buchner instead of Jack Coan.

We’ve taken a look at his tape and broken down the data to see who Mayer compares to at tight end and whether he has the talent and skill set to be selected in the first round.

Simply, Mayer wins from a multitude of alignments.

He’s true weapon that an offense can move all over the line to create significant mismatches for his quarterback to target.

It helps that he has dependable hands. Both with a cushion or in traffic, Mayer possesses the ability and willingness to do what it takes to bring in the football. He shows comfort in playing outside his frame to reel in off-target passes as well. He’s not a flashy player, but he is sturdy, dependable and a rock solid target.

Mayer is exceptional at doing the little things in terms of route running. While he’s not the most fluid or sudden player in and out of his breaks, there’s a ton to like about how he has refined the necessary and smaller parts of his game.

Starting with how he stems, Mayer has the ability to win the leverage battle with how he manipulates defensive backs’ hips within his initial steps. Mayer has a strong jab step and has no difficulty putting his foot in the ground and forcing the man across from him to flip his hips.

The manipulation Mayer uses with his eyes and head follows suit as he really sells his stems with precision.

He throttles the pace of his routes at a high level as well to keep defenders on their heels as he kicks it into a second and third gear.

Not a tremendous separator by any means, Mayer is still able to show an ability to find and create green grass.

He shows an excellent shuffle release off of the line of scrimmage before sticking his foot in the ground and working out of his break.

Mayer isn’t a dominant blocker either, but he has the heart and willingness to give an effort when asked to engage the man across from him.

While he needs to improve his ability to latch when working upfield, he has a strong punch in his hands and has the ability to uproot the man across from him.

Mayer battled injuries early in the season that impacted his play, but there were also some areas of weakness that stood out.

Beginning with his hands, Mayer dropped a large number of passes on limited targets as a freshman in 2020. However, he cleaned that up in 2021, dropping only three passes on 96 targets a year ago. As he heads into his draft-eligible season, Mayer must maintain that reliability.

There’s also a wanting for a deeper route tree. Most of his tree tends to be over the middle of the field and underneath. When Mayer does push vertically down the field, he struggles to create separation from defenders. This could have been a health issue, but Mayer must prove he can win one-on-ones vertically at a higher level.

Vertical juice is not the only area where Mayer needs more separation. Once he gets engaged by a defender in man coverage, Mayer struggles to both get the man across from him out of his frame and use his hands at the top of his routes to create an added cushion.

While he has a good deal of flexibility to his routes, Mayer is not a player who’s going to make defenders miss in the open field. He will run through wimpy tacklers and lower the shoulder after the catch, but his yards after catch number are not overwhelming.

From a production standpoint, only two tight ends in the entire nation saw more targets than Mayer did a year ago, and one of them went 55th overall in the 2022 NFL Draft. With 96 targets in 2021 for the Fighting Irish, how well did Mayer fare from a data perspective?

Comparing Mayer to the draft class from a year ago, he stacks up favorably to the likes of Trey McBride out of Colorado State, Isaiah Likely from Coastal Carolina, Jelani Woods out of Virginia and Greg Dulcich from UCLA. He had a higher burn percentage (63.5) than McBride but landed slightly lower than Woods and Likely. Dulcich blew the class away with 73.4 burn percentage.

Mayer got open at a higher rate than Woods and McBride as well, with an open percentage of 79.2. Both Dulcich and Likely found themselves above 80% in this regard, but Mayer hovers right around those totals as well.

In terms of catch rate, only McBride (96.3%) displayed more secure hands than Mayer (94.0%). Woods and Dulcich actually hung near the back of qualifying tight ends in this category, as Likely fell in with a catch rate of 92.9%.

All in all, this is the tier of tight ends that Mayer falls into, with the highest among them going 55th overall (McBride) and the lowest going 139th (Likely).

Mayer has been a highly touted tight end for two years now as he’s shined for Notre Dame since Day 1. However, when comparing him to other tight ends, is he a top-tier talent that deserves to go in the first round, or does he fall in line with the second-round tight ends of years past?

An inability to create space and win consistently in one-on-one situations down the field really dampens his outlook. It likely keeps him out of the same tier as someone like Kyle Pitts when he came out of Florida. At this point, Mayer is still a step below the Pitts and T.J. Hockensens of the world in terms of talent and draft stock.

Mayer’s win percentage out wide leaves reason to believe he may be able to get that level with a season of full health, but we don’t have enough evidence at this point. Based off of the information we have and the film Mayer has put on display, there’s reason to believe he falls into the same tier of the Pat Freiermuths (Penn State) and McBrides of the draft (both went 55th overall).

With the potential rise of Buchner on the horizon, Mayer has a chance to raise his production and draft stock this season.