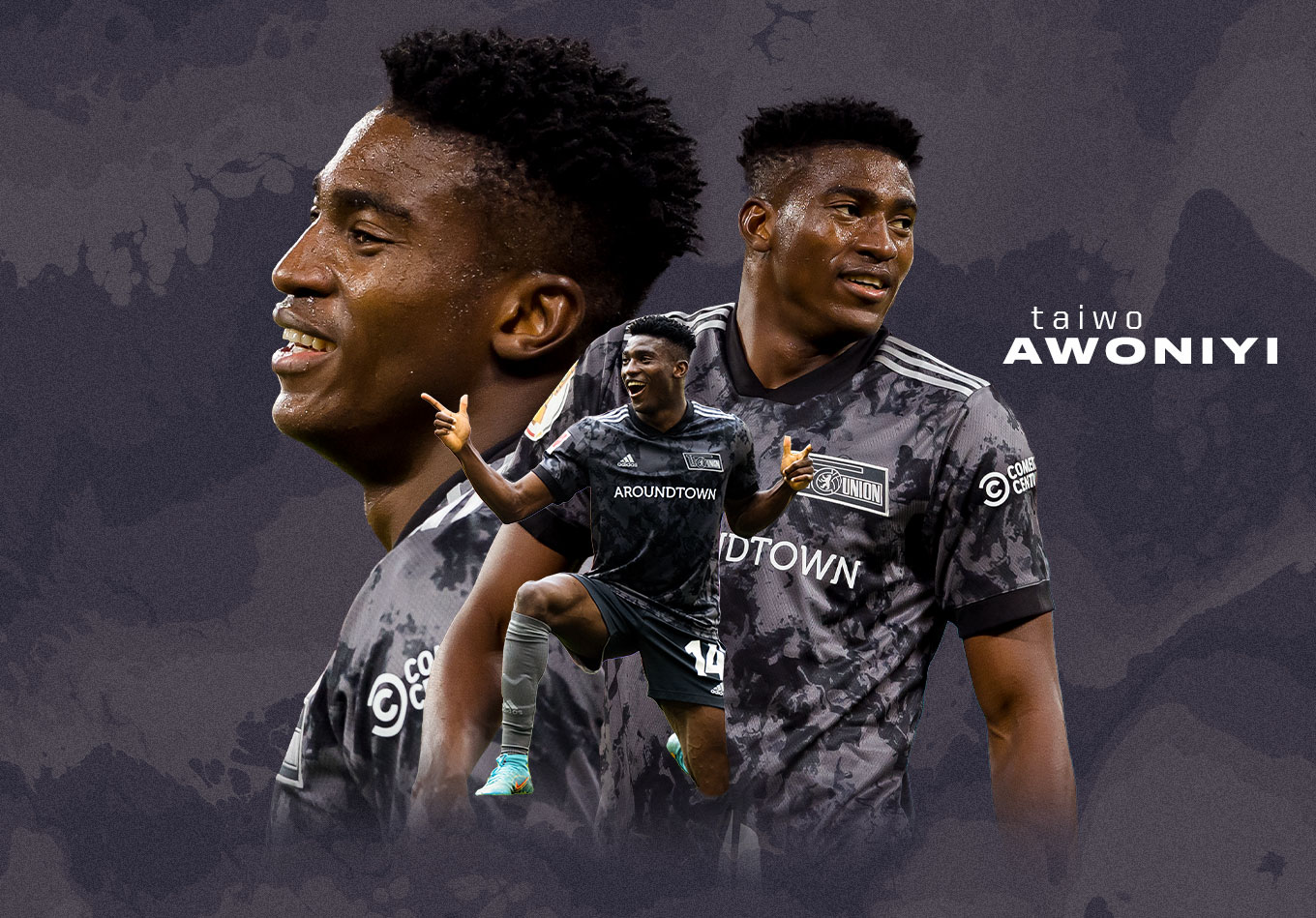 Will Taiwo Awoniyi be the Figurehead to Keep Nottingham Forest Up?

Nottingham Forest broke their transfer record to bring in striker Taiwo Awoniyi from Union Berlin for a reported £17 million, but what kind of player are they getting for their money?

Taiwo Awoniyi’s eyes will have scanned the Premier League fixtures as soon as he knew a move to the English top-flight was secured. The provisional date of 22 October has been set for Nottingham Forest’s meeting with Liverpool at the City Ground – the chance for Awoniyi to show his former club what they missed out on.

Awoniyi spent six years as a Liverpool player following his signing in August 2015 but, because of a repeated failure to secure a UK work permit, failed to play a single minute of action for the club. Instead, he was sent out on seven different loan spells across three different countries, before a permanent transfer to Union Berlin for a fee of £6.5 million was arranged last summer following a successful 2020-21 campaign as a borrowed asset from the Reds.

Just a year later, he leaves Union Berlin as their highest scoring Bundesliga player in history (20 goals), with 15 of those coming last season as his side finished an unexpected fifth place in the table and qualified for the UEFA Europa League – only missing out on the Champions League places by a single point.

Awoniyi was able to score a wide variety of goals last season in the Bundesliga, but it was noticeable that many of his strikes saw him receive the ball from deeper positions in the attacking half with still much work to do, highlighting his strength, pace and perseverance in the final third.

The Nigerian striker’s tally of goals was only surpassed by five players in the Bundesliga in 2021-22, this despite playing for one of the less desirable German top-flight clubs. An exceptional campaign for Die Eisernen was matched on a personal level by Awoniyi, who converted exactly one-in-five of his non-penalty shots (20%) and proved that a lack of goalscoring chances don’t always equal a lack of goals.

His average of 2.7 non-penalty shots per 90 minutes were much lower than the trio of top scoring players in the German top-flight last season – Robert Lewandowski (4.8), Patrick Schick (3.8) and Erling Haaland (3.5) – while he averaged lower non-penalty expected goals per 90 mins than any of the five players above him in the Bundesliga scoring charts (0.50).

He had to make do with a lower level of involvement in the box too, with Union Berlin shyer to launch attacks at will than the established giants of Bayern Munich, Borussia Dortmund and Bayer 04 Leverkusen. Awoniyi saw just 7.3% of his touches being shots, much lower than that of Lewandowski (12.4%), Schick (12.3%) and Haaland (10.7%), while he also averaged at least five percentage points lower for proportion of touches in the opposition box (14.7%) than the trio.

Awoniyi coped well with this and was very often just the finishing touch on Union Berlin attacks last season, with 12 of his 13 non-penalty goals seeing his only involvement in the move being as the player to score the goal.

Across the top six scoring players in the Bundesliga last season, Awoniyi was the player with the lowest open play shot-ending sequence involvement proportion (25%), with 15% of those seeing him only involved as the player to attempt the shot.

True, a lot of this is down to the style deployed by his side Union Berlin, who were the anomaly across the top half of the 2021-22 Bundesliga table. No side in the top nine places averaged fewer successful passes per game (286) and the lowest average possession figure among those teams (43.3%).

Playing with a compact midfield within a 3-5-2 formation that saw Awoniyi as the main striker and partnered by Sheraldo Becker, Union Berlin had the highest PPDA (passes allowed per defensive action) while also having the highest average distance per game as a team (118.5km) – they let the opposition see an awful lot of the ball but then picked their moments to win possession back in the most opportune moments.

Much of Union Berlin’s success came from their situational high-press, which saw them score 11 league goals following a high turnover in 2021-22 – more than any other side in the top five European leagues.

Awoniyi put the finishing touch on just two of these goals, but he was key in this pressing game, with the Nigerian winning the ball back from the opposition to start sequences leading to a goal on five occasions in 2021-22 – no Bundesliga striker did so more often.

Considering his injury record in 2021-22 was immaculate – he only missed three of Union Berlin’s league games in January due to Nigeria’s Africa Cup of Nations campaign – his time on the pitch last season is slightly less than expected.

The striker played just 72% of possible Bundesliga minutes across the entire campaign, while he was substituted off in 28 of his 29 starts and completed the entire 90 minutes in just one of his 31 Bundesliga appearances in 2021-22 – that was the final day win over VfL Bochum, when Awoniyi scored an 88th minute winner to send Union Berlin into the Europa League next season.

He averaged 74 minutes across his 29 league starts last season, being substituted before the 70th minute in nine of those.

There’s little doubt that playing for a team that sees less of the ball than their opponents and keeps a compact, efficient structure is hard work and demands high levels of fitness, but was his early exit in most matches down to this?

The official Bundesliga distance and sprint data doesn’t completely suggest so, with 24-year-old Awoniyi running less in the average 90 minutes (9.85km) than Robert Lewandowski (9.86km) and Erling Haaland (10.03km) and making fewer sprints per game than the new Manchester City striker (25.7 vs. 26.5), but still, it’s hard to paint a complete picture with two data metrics alone.

One worry Nottingham Forest fans may have is the issue of players that have done well in the Bundesliga failing to translate that goalscoring form in other top European leagues across the last few seasons – a phenomenon labelled the ‘Bundesliga tax’ by some. Our very own Tom Hancock covered this back in October of last year, plus it’s been covered by leading data analysts such as Grace Robertson and John Muller more recently.

Unlike Erling Haaland – who we know can also reproduce his goalscoring form at the highest level of club football, the UEFA Champions League, Awoniyi is largely unproven outside of 2021-22’s flowering success. The Nigerian had scored just 22 goals in 103 top-flight league appearances before last season, albeit as a player in his young twenties and having to deal with various club moves and tactical ideologies. But then again Haaland is costing Manchester City a reported £51 million – three times that of Awoniyi’s fee – plus with the added weight of major expectation.

Timo Werner scored 28 goals for RB Leipzig in 2019-20’s Bundesliga before moving to Chelsea. Since then, Werner’s scored 10 goals in two seasons (56 appearances) in the Premier League, although much of his woes have come from a huge difference in playing style and deployment between old and new clubs, and he’s not the only forward to have suffered this problem at Chelsea in recent times (cough Romelu cough Lukaku cough).

One transfer that’s more alike that of Awoniyi’s to Forest was that of Wout Weghorst. The Dutch giant scored 20 goals in a very successful 2020-21 Bundesliga campaign with VfL Wolfsburg before a move to Premier League strugglers Burnley in January 2022. In 20 appearances for the Lancashire club, Weghorst scored just two times at an average of 729 minutes per goal – a lot worse than his goal every 147 minutes at Wolfsburg the season before.

So, considering the above, what would be deemed a success for Nottingham Forest and Awoniyi? Scoring goals in the Premier League is hard. It’s even harder for a player who is a) new to the league and b) playing for a newly promoted and unfancied club.

Just 15 players have scored 15 or more goals for a newly promoted side in the Premier League era, with just nine of those coming since the turn of the century. Only one of the nine – Peter Odemwingie at West Brom – was a case of a marquee signing hitting the ground running, when he scored 15 goals in 32 appearances in 2010-11.

Awoniyi showed that he was comfortable with the pressure of being the sole source of goal threat for a side, last season at Union Berlin. He could well be trusted with that role yet again for Forest in 2022-23.

His shot total (67) was 30 more than any other player at the club, while he posted an expected goals total that was more than double any other team-mate. He scored 30% of their Bundesliga goals and astonishingly was responsible for 25% of their total expected goals – a quarter of their goal threat coming via a single player.

It should be expected that, like Union Berlin in the Bundesliga last season, Nottingham Forest will be unlikely to have a lot of the ball in the Premier League next term. As a result, they’ll need a hard-working goal threat in the number nine position, with pace to trouble opposition defenders and strength and perseverance to take the few opportunities that will present themselves as the underdogs.

The good news is that in Taiwo Awoniyi, Forest seem to have recruited just that player.