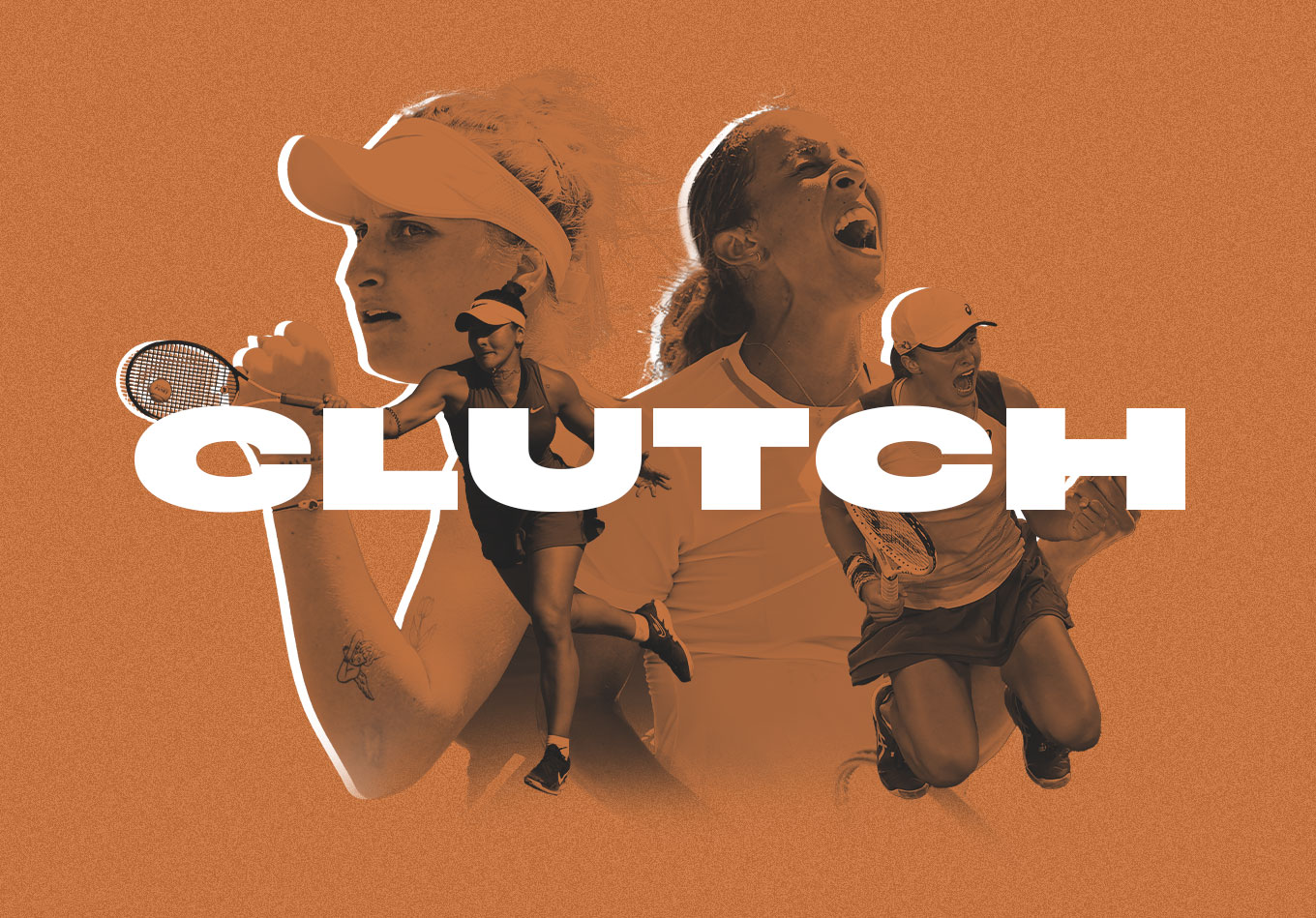 Tennis is full of big moments: an ace to secure a crucial hold, or a vital break point to take a set. Matches can hinge of the outcome of these moments. And some players are better at performing on these pivotal points. With the help of a new metric – clutch points – we can go beyond the typically restrictive game/break point definitions to truly explore the moments that matter most.

What Are Clutch Points?

Clutch points are those most important to the outcome of a match. This influence can be directly quantified using our leverage metric. For all the details, it is worth reading our first explainer on the leverage metric. But, as a brief explanation, leverage measures the impact a single point has on the final outcome of a tennis match. It does this by quantifying how much a player’s probability of winning the match changes after that point is won or lost.

A clutch point is defined as any point with a leverage of 10% or more – those which have a significant impact on the final result of a match.

Clutch points therefore allow us to focus on the points that really matter. No longer are those worthless break points at 6-1 5-0 down considered equal to those at 5-4 to take the first set. And those all-important set up points (a point to set up a game or break point) can now get some recognition.

Which Players Have Performed Well in Clutch Moments?

Let’s look at the WTA 2022 season so far (data up to May 23 2022 for WTA 1000, 500 and 250 events, excluding qualifiers). To get an idea of how players perform on clutch points – and how this compares to points in general – we can look at what percentage of points and clutch points do players win.

The immediate standout player, to no surprise, is Iga Świątek. Big points are no issue, with the Pole boasting the third-highest clutch win percentage, and she cannot be rivalled in all-round success either. Her eventual French Open success – which felt inevitable from day one –  was no surprise after this start to the season.

Bianca Andreescu, meanwhile, has a different profile. Her slightly above-average point win % is good but her clutch point performance is the best of all players on tour. Having missed the start of the season, she is ranked 72nd and her clutch performance against similarly ranked players is fantastic. But when she inevitably faces top players in the later rounds – Sabalenka in Stuttgart, Pegula in Madrid and Świątek in Rome – this performance becomes much more average.

On the other hand, we have Madison Keys. She has a high level of general performance – winning just over 52% of her points this season. However, her clutch point performance gives us a different insight. When she faces those really important moments, her performance is below average.

Player performance on clutch points provides some additional insight into how a player deals with these high-pressure moments. But how many they play raises other questions.

Which Players Play the Most Clutch Points?

Clutch points indicate those moments important to the outcome of the match. Yet, in a one-sided contest, you are unlikely to encounter many of these moments.

For example, take the quarter-final match between Petra Kvitova and Iga Świątek at the Miami Open 2022. Going into the match Świątek is already the heavy favourite with an 84% win probability. And when she cruises to a 6-3 6-3 victory without facing a single break point, it’s no surprise there wasn’t a single clutch point in the match. Świątek was expected to win and she did so comfortably. A lack of clutch points can indicate one-sided games.

With that in mind, here’s how each player’s clutch points proportion compares to how often they’re involved in a straight-sets match.

For Świątek, her low proportion of clutch points is a sign of her dominance on the court this season. 78% of her matches have been straight sets, with her winning all but one of those.

Yet, few clutch points are not always an indication of dominance. Take Alison Riske. 6.4% of her points have been clutch (seventh lowest) and 67% of her matches have been straight sets. However, she’s only won half of those. Clutch points are a good flag for one-sided matches, but additional context provides the full picture.

At the other end of the scale, we have Markéta Vondroušová. 18% of her points played have been clutch points – the highest of any player – and just 27% of her matches have been straight sets (third-lowest). It seems games are rarely straightforward for Vondroušová.

If you want to know the players who get their work done quickly – whether that be winning or losing – looking for a low number of clutch points played is a good place to start.

But what if you’re interested in the matches that swing back and forth, never knowing which break will be the decisive one? Clutch points can help us there as well. By looking at the matches with the highest total leverage and clutch points, we find those that were full of big moments and excitement.

Here are some of the most exciting matches from this season.

A three-set, three-tiebreak epic between Kaja Juvan and Angelique Kerber for the Strasbourg title comes out on top.

What we’ve shown here is just the beginning. How does a player’s clutch performance change between surfaces? What about between clutch setup points and clutch break points? What tactics do players employ on clutch points? Even using clutch and leverage to easily produce highlights of matches.

Clutch points open up a new way for us to analyse the game. 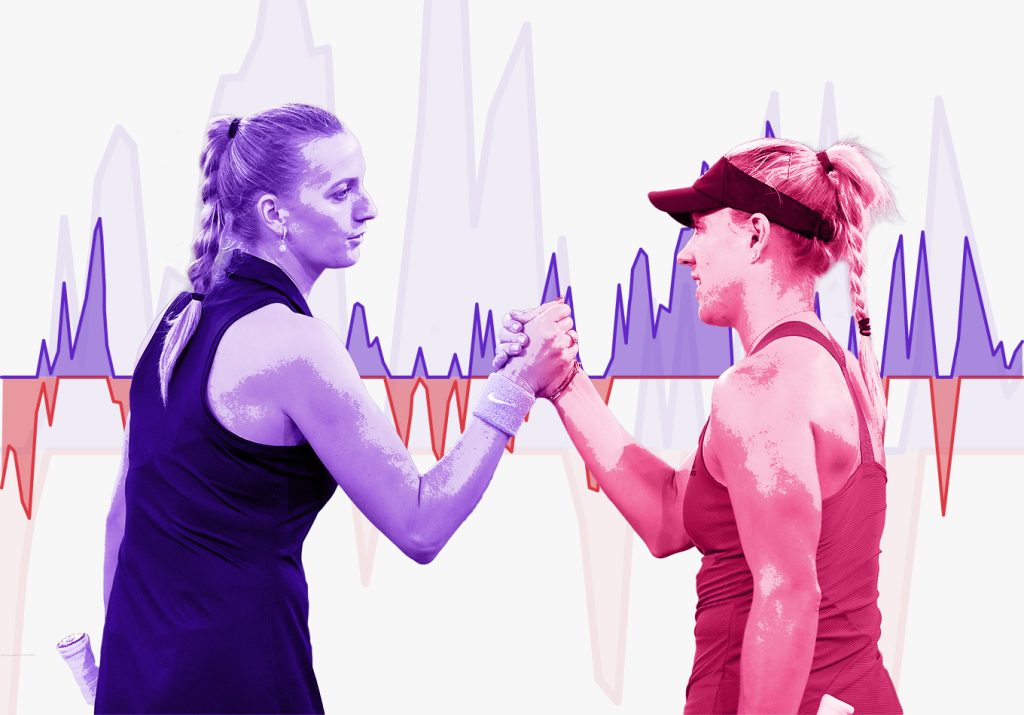