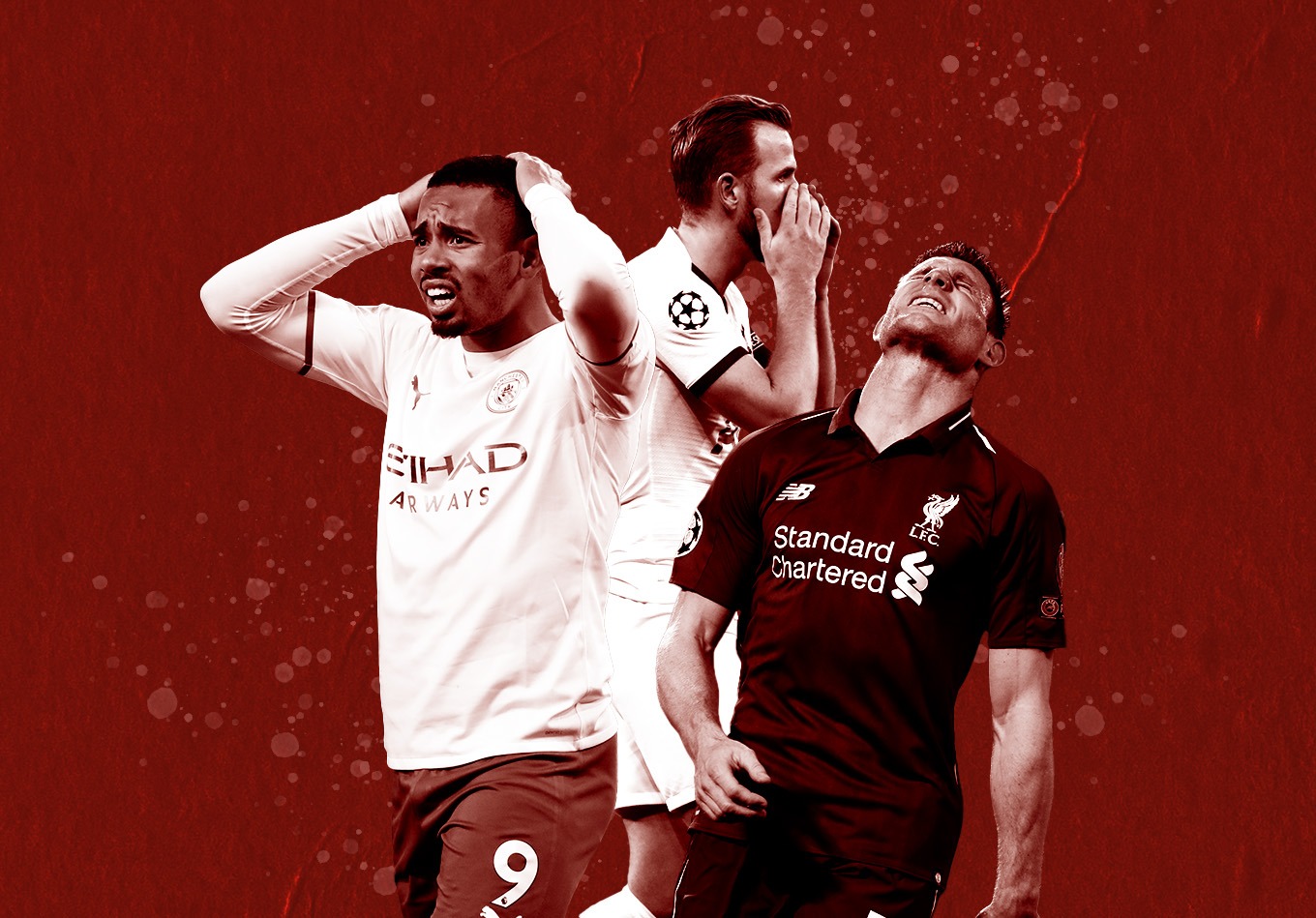 For a long old time English clubs had an almost perfect record once they had reached the glorious stage that is European Cup final, be that pre-1992 or once it had been restyled as the Champions League. Other than a vociferously-disputed defeat for Leeds United against Bayern in 1975 and the almost meaningless – given the context – defeat of Liverpool by Juventus at Heysel in 1985, clubs from England simply turned up and won the biggest honour in the game, if they reached that stage. Manchester United in 1968 was followed by the perfect heyday run of Liverpool in 1977 and 1978, Nottingham Forest in 1979 and 1980, Aston Villa in 1982 and Liverpool again in 1984. Once English teams had been readmitted to European competition in the early 1990s it took a long time before any of them got anywhere near a Champions League final, but eventually, in 1999, Manchester United did so, and despite trailing from the sixth minute to second-half injury time, Alex Ferguson’s team won the game in injury time. Solskjaer had, as prophesised, won it.

Six years later Liverpool faced an even more ridiculous deficit in Istanbul, trailing AC Milan 3-0 at half-time but you know what happened next. Everyone does. And it wasn’t unusual for deep thinkers in May 2005 to eagerly theorise that perhaps English teams would always win when they reached the continent’s showpiece match. Was it Premier League DNA? Sheer passion? Or just a random coincidence? What follows is a reexamination of the sudden storm of eight defeats for Premier League sides in Champions League finals since 2006. Some were literally baked in, because there have been three all-Premier League encounters in that period, but defeat in the continent’s biggest match hurts nonetheless. Here’s how it started happening, and then gathered pace.

Sol Close But So Far

Arsenal reached the 2006 Champions League final just as their arc of dominance was heading south. Arsene Wenger’s team should arguably have become champions of Europe two years earlier, in their Invincible season, but that year the continental competition proved a Wayne Bridge too far. In 2005-06 they were powered by an extraordinary defensive over-performance, not conceding in any of their last four group games or any of the six knockout games before the final. It was apt, then, that their only goal in the final came from defender Sol Campbell, putting Arsenal ahead before half-time, about 20 minutes after goalkeeper Jens Lehmann became the first player to ever get sent off in a European Cup final.

People forget just how close Arsenal came to winning and becoming the first club from London to win the Champions League. Samuel Eto’o’s equaliser with a quarter of an hour to go was followed, inevitably, by a winner from substitute Juliano Belletti, although it was fellow replacement Henrik Larsson who was the momentum changer. It was only Barcelona’s second European Cup win, but they have added three more since. Arsenal have never been back.

Two years after Milan and Liverpool had played out one of the greatest Champions League finals in Istanbul, they faced off again in (relatively) nearby Greece. The hipster attitude to this quick pair of finals is that although Liverpool won (on penalties) in 2005, they actually played better in 2007, and, based on a lot of metrics, that is absolutely the case.

Rafa Benitez’s team had 12 shots to Milan’s five and the chief architect was Jermaine Pennant, who created six goalscoring chances, a total that the likes of Lionel Messi or Andres Iniesta have never matched in Europe’s showpiece game. Had Liverpool won then maybe this game would be known as The Pennant Final. But they didn’t, and it isn’t.

The first all-English Champions League final took place on a sodden night in Moscow in 2008. Manchester United were trying to add a third European Cup after their 1968 and 1999 triumphs, while Chelsea, managed by semi-interim boss Avram Grant, were both happy to be there and ravenous for the trophy. The persistent hubris-tinged focus is on Didier Drogba’s red card and John Terry’s miss in the penalty shootout (even though it was Nicolas Anelka who missed the decisive effort) but low-key Frank Lampard was one of the most impressive players in the game. He scored Chelsea’s equaliser, completed the most passes for his team and tucked home his penalty in the shootout. Four years later he’d win the Champions League. Ten years after that he’d keep Everton up, just about. Life, like rain, can come at you fast.

The 2009 final saw Alex Ferguson’s Manchester United going for their second Champions League win in a row having sealed a third Premier League title in succession. It was the high-water mark of Ferguson’s final great side, and many fancied them to retain their European crown, against Pep Guardiola’s up-and-coming Barcelona, featuring waspish tyro Lionel Messi. United had Cristiano Ronaldo, two years older than Messi and overtly desperate to move to La Liga. This would be Ronaldo’s last game for United, and he was determined to dominate the final, having missed a penalty in United’s shootout win against Chelsea 12 months earlier.

As it transpired, Messi outshone Ronaldo by some distance, making almost twice as many touches and heading home Barcelona’s game-confirming second goal. Dominating football games for Spanish giants was destined to be Ronaldo’s business, just not quite yet. Heading in goals was already very much his business and yet it was Messi soaring like a Greek God in this game.

Champions League Final [2011, dir: Michael Mann] is a drama featuring an ensemble cast, led by Pep Guardiola and Alex Ferguson, two of football’s most legendary managers. Ferguson was hungry to win a third European crown, Guardiola was looking for a second in three seasons. United had home advantage of sorts, with the game at new Wembley, but what transpired was one of the most humbling displays for an English side in a major European final, with Barcelona’s imposing display widely regarded as the peak performance in one of football’s finest eras. Ferguson called that Barcelona side “unplayable” and the best he ever faced.

The raw stats are these: Barca had 22 shots and 12 on target, generating an xG of 2.4. United, observed by a chastened Ferguson, had four shots, Wayne Rooney scoring with their only effort on target (no Englishman has scored in a final since) and an xG of only 0.4. It was a Champions League shellacking but like all movies it had a major twist: United have never returned to a final, Guardiola has yet to win the Champions League again and Lionel Messi has won it only once since that day, in 2015. Enjoy the good moments, while they last.

Chelsea won the 2012 Champions League in a joyous but wildly undeserved (based on the pattern of play) game against Bayern in Munich. That unlikely victory then ushered in a dark period of five successive finals not featuring a Premier League club. It was the era of Real Madrid playing Atlético, of the Premier League’s clubs forgetting how to defend and letting Leicester City win the league.

It took an influx of world-class managers in the middle of the decade to turn the tide, with Jurgen Klopp the first to arrive by late 2015. By 2018 he had turned Liverpool’s fortunes around so extravagantly that they had stormed to the Champions League final, knocking out Pep Guardiola’s Manchester City 5-1 on aggregate in the quarter-finals and Roma 7-6 in the semis. It was heady, relentless football that left your head spinning, but not as much as Loris Karius’s in the final.

Sergio Ramos, not content with reconstructing Mohamed Salah’s shoulder, also connected with Loris Karius with his elbow, reportedly giving the Liverpool goalkeeper a concussion. Karius’s subsequent display certainly backed that theory up, with Madrid’s first goal coming after Karius threw the ball on to Karim Benzema’s foot like he was 10-pin bowling in a field, while Real’s third was hit from long range and squirmed straight through his grasp. In xGOT terms, Karius ended the game with a -1.4 figure, the sort of underperformance some keepers don’t see in an entire season. The most brutal position on the pitch had experienced the most brutal Champions League final imaginable.

A year after Liverpool’s wretched defeat to Real Madrid they were back in the Champions League final, playing in Madrid against a team in white. Their opponents were Tottenham Hotspur, though, the London club having reached this stage for the first time. An odd three-week gap between the end of the league season and the Champions League final, along with intense heat at the Wanda Metropolitano Stadium, made for a turgid, slow-motion final, especially after Mohamed Salah scored a penalty in the second minute. Tottenham barely created a chance in the first half but woke up in the second, particularly in the final quarter, hitting eight shots on target. Liverpool ended the game having only managed three, but crucially scored with two of them and thus collected their sixth European Cup. That late flurry could easily have turned the game for Spurs but few people remember slightly improved passages of play and instead the game has passed into folk memory as a start-to-finish poor display from Mauricio Pochettino’s men.

2021 was Manchester City’s time to win the Champions League. They were facing a Chelsea team who had retooled their management team mid-season, replacing Frank Lampard with Thomas Tuchel, the German initiating one of the great mid-season improvements. Guardiola’s big decision pre-game was to go with an attacking midfield of Phil Foden, Ilkay Gundogan and Bernardo Silva, leaving Fernandinho and Rodri on the bench. To 2021 brains it was Fernandinho who was the big absence, whereas to our modern minds Rodri seems the bigger loss. Either way, Chelsea’s goal via Kai Havertz came from them transitioning with ease through City’s midfield, while City only had Kevin De Bruyne for 60 mins, the Belgian substituted in tears after picking up a concussion from an Antonio Rüdiger challenge.

De Bruyne, so often City’s eternal runner and protagonist, made only eight carries in the game, fewer than N’Golo Kante. John Stones made by far the most in the game, but they were invariably into a midfield zone which City had long since lost control of, a development from which their Champions League hopes, for 2021 at least, never recovered.