How Arsenal’s Corners Are Creating Havoc | The Analyst 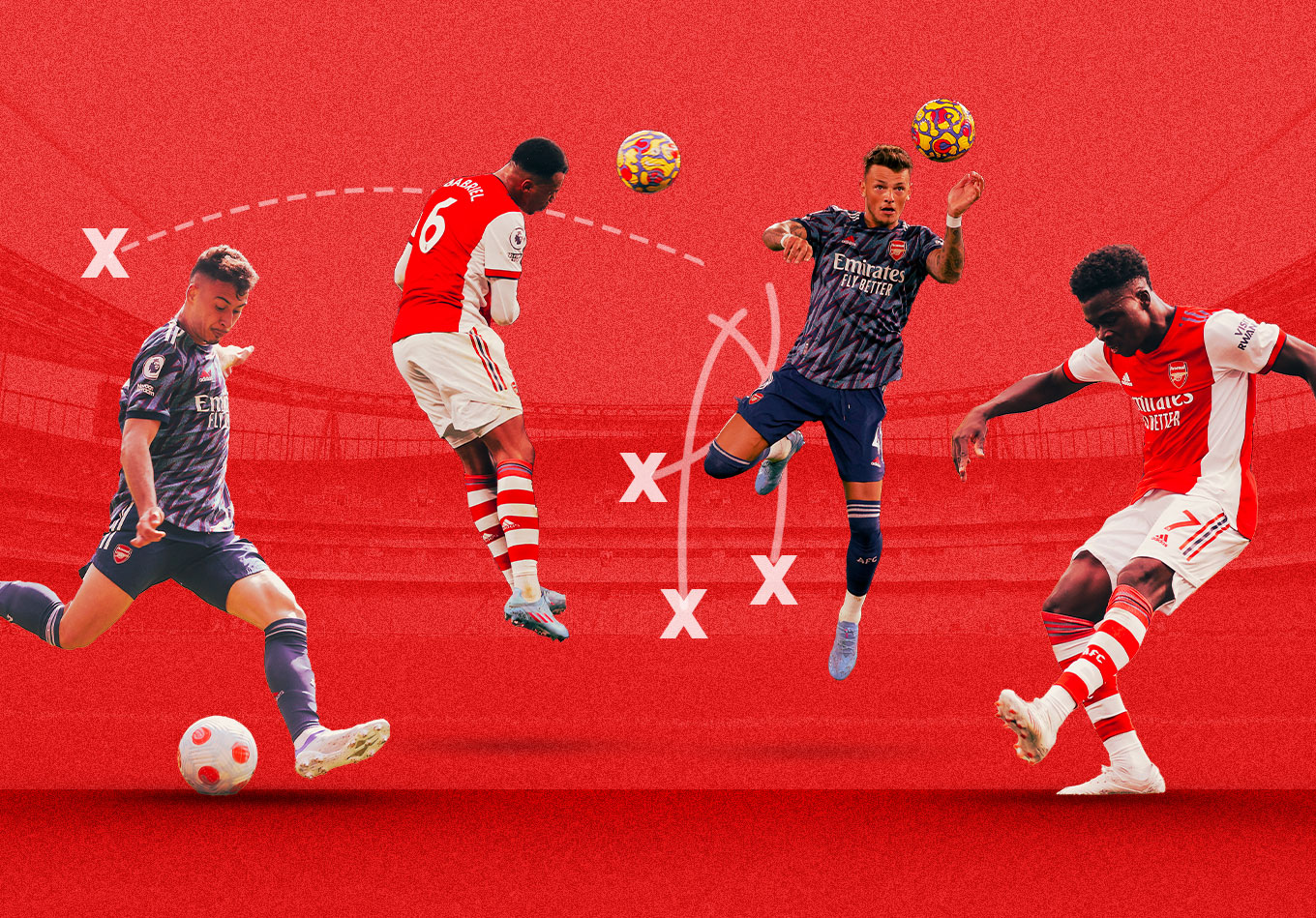 Kings of Inswing: How Arsenal’s Corners Are Creating Havoc

Sunday was quite the day for Arsenal’s centre-back union. And no, not (purely) because it was the Sunday of a bank-holiday weekend, inarguably among the top tier of days in a calendar year. But rather because both Arsenal’s centre backs got on the scoresheet in a gritty away victory against West Ham, a win that solidified the Gunners’ top-four ambitions. Rob Holding, who opened the scoring with his first Premier League goal, before fellow defender Gabriel bulleted in the winner, described it as “the perfect day for centre-halves.”

There have been plenty of those this season as far as Arsenal have been concerned, particularly when it’s come to their aerial prowess from corners. Mikel Arteta’s side have been exceptional in these situations at both ends of the pitch.

Only Manchester City and Liverpool have scored more goals from corners than Arsenal this season, while the Gunners have conceded the joint-fewest from corners – just the one, tied with Pep Guardiola’s side.

That is impressive company to keep, particularly from a side long-renowned as physically frail and exploitable from set pieces.

Much of that success needs to be credited to new set-piece coach, Nicolas Jover, who arrived over the summer from Manchester City. Jover replaced previous set-piece specialist Andreas Georgson, with the Swede returning to former employers Malmö after just 11 months in north London.

To Georgson’s credit, he had set the foundations for greater steel in defence, with the Gunners conceding just four goals from corners last season, the second-lowest mark in the league. That was a huge improvement from the nine they conceded in 2019-20, the fourth-worst record in the division. But Arsenal’s attacking output from corners under Georgson’s left a lot to be desired. They converted just three of them last year, with only Crystal Palace scoring fewer.

As well as building on that defensive effectiveness, it’s attacking potency that Jover has truly unlocked. A look at the net goal difference from corners between this season and last shows just how much Arsenal have improved in this aspect – and how much some other sides have regressed.

With four games to go, there’s every chance they’ll eclipse the club record for the most corners scored in a single Premier League campaign.

And only two sides have scored a higher proportion of their goals from corners than Arsenal’s 19% – Burnley (23%) and Southampton (20%). The set-play proponent loves this. The open-play optimist is sceptical. They can fight it out while we explain how they’re doing it.

Understanding the Arsenal corner template this season is to understand two basic tenants.

The first is that the corner delivery is invariably an inswinger. With Bukayo Saka and Martin Ødegaard from the right and Gabriel Martinelli and Emile Smith Rowe from the left, Arsenal’s corners are inswingers whipped hard towards the near post, or under the crossbar and on top of the opposition goalkeeper. Only Burnley (85.9%) have delivered a higher proportion of inswinging corners than Arsenal’s 72.5% this season.

The corner map below shows just how focused on inswing they are:

The second is that the Gunners cram the six-yard box full of players. Seriously cram it. First with their own players which, in turn, forces the opposition to follow suit. They start with an average of 2.66 players inside the six-yard box at corners, comfortably the most in the league.

They cram the box to such an extent that at the time of delivery, there are on average over nine players combined in the six-yard box, by far the highest mark in the league.

Let’s look at Arsenal’s typical attacking setup from a corner against Southampton. They’d just scored from a corner about three minutes before, but this example paints a very clear picture of the routine Arsenal are using to good effect.

Now, look at how crowded that six-yard box is. The presence of four Arsenal players in there draws five Burnley players back. Including the goalkeeper Willy Caballero (since when has Caballero played for Southampton, by the way?) you’ve got 10 players inside the six-yard box.

Next, Arsenal position their two best aerial threats at the edge of the box. In this case, it’s Gabriel and Takehiro Tomiyasu. Gabriel has been an everpresent; sometimes he’s joined there by Ben White, sometimes by Holding. Sometimes both. Those players are man-marked with Ibrahima Diallo picking up Gabriel and Tino Livramento on Tomiyasu.

Lastly, Arsenal’s striker – for the most part this role has been done by Alexandre Lacazette – acts as a goalkeeper blocker. Lacazette isn’t even looking at the ball in the still above, instead focused on legally disrupting Caballero from coming to claim the ball, obstructing his line of vision, and generally being really annoying.

As Saka runs up to take things start to happen. Three of Arsenal’s players already in the six-yard box run towards the ball, dragging their markers with them. These runs are often made in front of their markers, in the defender’s blind spot, making it harder to track. Tomiyasu runs across his marker Livramento and in front of Gabriel’s marker, Diallo, while the Brazilian does the opposite. Lacazette continues to be bothersome.

Running players in the six-yard box towards the ball not only drags Southampton’s best aerial defenders, including 6-foot-2 Jan Bednarek, underneath the cross, but it also vacates space for Arsenal’s best aerial attackers to burst into.

Livramento and Diallo get in a right mess trying to deal with Gabriel and Tomiyasu’s runs, first motioning to swap who they’re marking, before going back to their original men, before realising it’s all futile at this point. Livramento even puts his arms out in frustration after realising he’s lost his man. Those Arsenal players in the six-yard box keep dragging their markers away – Partey even gives his a little shove for good measure – and Tomiyasu attacks the space powerfully. Lacazette keeps on tussling.

Bednarek attacks the ball but is caught under it and Tomiyasu powers a header which is saved by Caballero at his near post.

Southampton really hadn’t learned from Gabriel’s goal just minutes before. Maybe the fight had gone out of them at 3-0.

This time, the corner comes from the left-hand side via Martinelli’s right boot. Again, we’ve got a packed six-yard box with 10 players crammed in there.

And again, we’ve got three runners dashing in front of the near post, dragging their markers with them. Gabriel charges into that space, leaving his man-marker Livramento (who’s having a torrid time at this stage) floundering.

Once again, Bednarek gets caught underneath the ball jumping with Granit Xhaka. Gabriel’s running start on Jack Stephens – who is caught on his heels – gives him the momentum to beat everyone in the air in this zone. Lacazette is doing his thing, and impeding Caballero here has a decisive effect.

Because of Lacazette’s block, Caballero is late coming to punch and gets his angles all wrong, even managing to block off his own jumpers. It’s an easy finish in the end for Gabriel.

This routine has happened repeatedly throughout the season. Here’s another example from Arsenal’s away fixture against Leeds.

Let’s run through the set up. Inswing. Crowded six-yard box. Two runners positioned on the edge of the box.

As the corner comes in Xhaka runs towards the corner taker. Lacazette blocks the ‘keeper. Partey ‘holds’ his marker inside the six-yard box through a mixture of grappling and positioning.

Gabriel and Tomiyasu again opt for the criss-cross runs, but there’s some nice added nuance to this one. Tomiyasu pins himself to his marker Stuart Dallas, holding him in place…

Then as Gabriel underlaps him, Tomiyasu executes a basketball-esque screen with his left arm, blocking off Robin Koch who is trying to match Gabriel’s run. Arsenal’s setup keeps a large number of Leeds players ‘stuck’ in the six-yard box, leaving a huge amount of space for Gabriel to attack. He’s got a free run at goal.

On this occasion, the delivery doesn’t quite go as intended and the corner is slightly behind the Brazilian, forcing him to stop and check his run. He wins the header, but Leeds are able to clear.

One of the most effective things that running your players towards the ball does is destabilise opposition defenders. They can’t help but creep forward, even in a zonal scheme, and when the ball is hit over them their own momentum means they can’t attack it effectively.

Let’s look at one last example of this against Leicester. The set up is the same as in previous examples.

Arsenal’s three six-yard box players move towards the ball, pulling Leicester’s defensive shape with them, like they’ve got their own little gravitational field. Gabriel and Aubameyang do the crossing runs, with the former captain heading towards the back post.

What’s stark about this example is that when the ball is at the highest point of its trajectory, look how many Leicester players are caught under its path unable to do anything. Seven in total. And Arsenal haven’t really done anything other than draw them forward and kick the ball over them.

Even Luke Thomas, who looks to be in a good position, misjudges the flight as Aubameyang steals in round the back post. He should score.

We won’t break down more examples here, but there are plenty more we could go through. Look at the set ups against Burnley, Aston Villa and Newcastle. Look familiar?

This routine won’t continue to be so profitable for long. Just as Arsenal have analysed corner situations and learnt set-piece routines in both boxes, other sides will be doing the same. And it’ll be down to Jover and his players to adapt their methods.

What’s positive for Arsenal though is their investment in this part of the game, the awareness of how important dead-ball situations can be. When something directly in your control accounts for almost a fifth of your league goals, it makes sense to focus on it.

Leeds United visit the Emirates Stadium on Sunday, having conceded 10 times from corners this season, the joint-fourth highest mark in the league. With four goals already, Gabriel is currently level with Bednarek as the league’s highest-scoring central defender. Don’t be surprised to see either of those numbers grow this weekend.