Ruud van Nistelrooy: More Than Just A Poacher | The Analyst 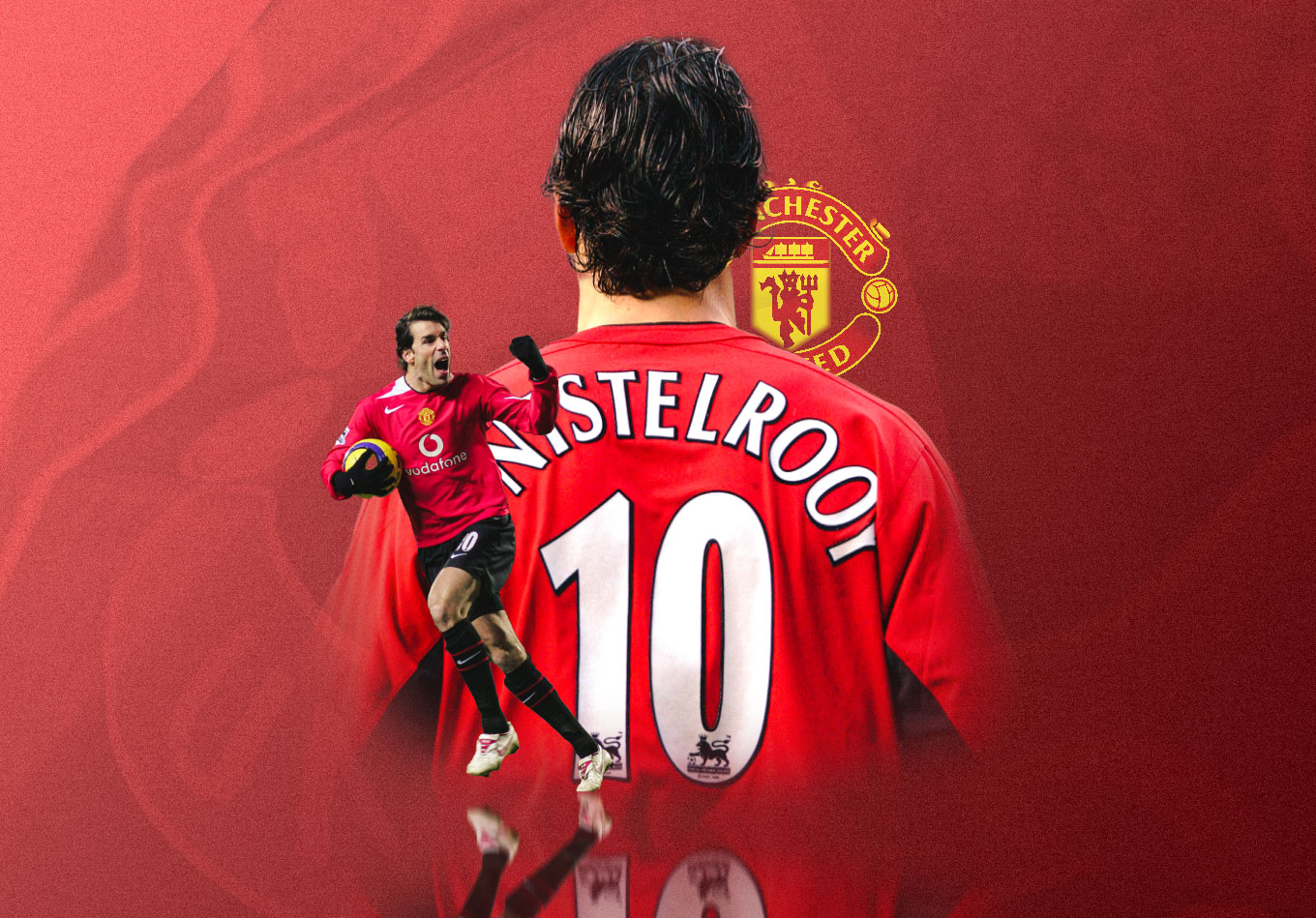 Today marks 16 years since Ruud van Nistelrooy’s final goal for Manchester United, a match-winner against Bolton Wanderers in 2006. The Dutchman was only with the club for five seasons but made a splash that very few have since. Van Nistelrooy’s battles with Thierry Henry for supremacy in the early-2000s Premier League were captivating, and here we take a proper look at the Dutchman’s abilities and impact in England.

After winning the Eredivisie Golden Boot for two years running, Ruud van Nistelrooy seemed set to move to Manchester ahead of the 2000-01 season. His prolific goalscoring capturing the attention of Sir Alex Ferguson, who was attempting to rebuild his Premier League champions due to their inability to add to 1999’s Champions League triumph.

However, knee problems in April of that year eventually caused the proposed move to collapse. The player suffered a serious knee ligament injury in training, seemingly putting his dreams of playing in the Premier League in serious doubt.

Ferguson and United were still keen despite this setback and signed him a year later, for a then-record British transfer fee of £18.5 million. United’s top scorer in 2000-01, the veteran Teddy Sheringham, was offloaded to Spurs, and it looked like van Nistelrooy was set to become the main man for United rather than United relying upon their famous quartet of strikers in rotation.

It didn’t take long for van Nistelrooy to endear himself to the Stretford End faithful. Against newly promoted Fulham, he became the first Manchester United player to score twice on debut in the Premier League. James Wilson and Marcus Rashford are the only others to have done this for the club since.

The Dutch striker hit the ground running in his debut season, scoring 23 times in 32 appearances. Only three players in Premier League history – ironically one of them being the man who he effectively replaced, Andrew Cole – have had a better debut season in the Premier League than that. Incredibly, given the club’s dominance of the 1990s, van Nistelrooy was the first United player to score more than 20 goals in a Premier League season, as well becoming the club’s first player to score 10 European goals in a single campaign, and the PFA Players’ Player of the Year followed.

The peak of his first season at United came during the winter as he became the first Premier League player to score in eight consecutive matches. Not content with this, van Nistelrooy bettered this record the following season, scoring in 10 successive games to help United on their way to the league title. No other player would score in eight consecutive appearances in the competition until Daniel Sturridge did so in 2013-14, before Leicester City’s Jamie Vardy broke the Dutchman’s record in 2015, famously and cruelly scoring against Manchester United in the 11th match of the run.

The second of van Nistelrooy’s great scoring runs in the Premier League was kickstarted by a hat trick against Fulham in March 2003, where he scored arguably his most memorable goal in his English top-flight career by running the entire half against the Cottagers before neatly finishing past Maik Taylor. For a player renowned for tap-ins from close range, he demonstrated here that movement, even over a long distance, was a key aspect of his play.

With Andrew Cole and Dwight Yorke both offloaded to Blackburn Rovers in 2002, van Nistelrooy was the out-and-out leading man for United, and as such the tactic was to feed him to score. Twenty-four different players created league goals for him over the five seasons he was at the club, with Ryan Giggs the key contributor with 13 assists and David Beckham next on five. Giggs assisted only one player more often in his Premier League career: Andrew Cole the recipient of 14 of the Welshman’s assists.

2002-03 saw a nip-and-tuck battle between Manchester United and Arsenal for the Premier League crown. Battlelines were drawn – Ferguson vs. Wenger, Keane vs. Vieira and van Nistelrooy vs. Henry.

In his second campaign in England, van Nistelrooy claimed the Golden Boot with 25 goals to become the second United player to win the award after Dwight Yorke in 1998-99. He scored 44 times in all competitions that season, with 14 goals in European competition, four in the FA Cup and one more in the League Cup adding to his 25 league goals. This is still a record by a player for a Premier League club within a single season, one that he now shares with Mohamed Salah following his 44 goals for Liverpool in 2017-18.

This was, though, the only season in which the Manchester United striker would outscore Arsenal’s star man Thierry Henry, as United secured the Premier League title. Van Nistelrooy scored 13 times in the final eight matches to swing the pendulum in United’s direction.

In his five years in the Premier League, van Nistelrooy scored 95 times at a rate of 128 minutes per goal, but this was 35 goals fewer than Henry (at 116 minutes per goal), largely due to an injury-hit 2004-05 where the Dutchman scored six goals in 17 games. As seen from the goal tallies over the period, the duo were undoubtedly the two best strikers in the league at the time, with Alan Shearer finishing his career with a respectable 79 goals in his final five seasons.

Henry may have the edge over his goalscoring rival, but van Nistelrooy should not be underestimated. He scored 20 or more goals in four of his five Premier League seasons, with the exception only being lower due to injury. In fact, Shearer is the only player to also manage this feat in four of his first five campaigns. Henry’s five 20+ goals seasons, of course, were parallel to van Nistelrooy’s entire Premier League career.

The battle with the Gunners would rumble on through 2003 as van Nistelrooy became the third-fastest player to reach 50 Premier League goals, doing so in 68 appearances, only slower than Cole and Shearer.

Soon after, in another memorable meeting with Arsenal in September 2003, van Nistelrooy drew the ire of the Arsenal players for his part in the sending off of their captain Patrick Vieira. At the end of the match, United were given a penalty which the Dutch striker duly missed causing the Arsenal players, led by Martin Keown, to aggressively confront him. It was one of four penalties he missed for United in the Premier League but ultimately the spot-kick that’s most remembered.

The 2003-04 title went to Arsenal in emphatic fashion, but van Nistelrooy had the last laugh the following season. He avenged that penalty miss by converting from the spot against the Gunners in the ‘Battle of the Buffet’ at Old Trafford, which ended the Invincibles unbeaten run at 49 games.

2004-05 was an unfortunate season for van Nistelrooy due to injury. He returned in the spring of 2005 and helped United reach the FA Cup final with two goals in the semi-final against Newcastle, but they ultimately lost on penalties to Arsenal.

With the arrivals of Louis Saha to cover his absence, teenage sensation Wayne Rooney to help lead the line and the increasing importance of Cristiano Ronaldo in United’s system, 2005-06 saw van Nistelrooy’s honeymoon period with Manchester United come to an end. He was an unused sub in the League Cup final against Wigan that year, a rumoured rift with Sir Alex Ferguson reaching its climax toward the end of the season as he was frequently left on the bench.

Despite this, van Nistelrooy finished second in the Golden Boot with 21 goals behind his nemesis Thierry Henry once again.

It’s fair to say that of van Nistelrooy’s first 150 games, he was much more prolific through the first 75, scoring every 112 minutes compared to every 152 in the latter 75. He also managed half as many appearances in which he scored multiple goals.

Yet van Nistelrooy did provide moments towards the tail end of his United career where he proved he was still vital, with two runs in 2005 of five consecutive Premier League appearances with a goal, as well as a four-goal Champions League game against Sparta Prague. He also signed off with winning goals against West Ham and Bolton.

He will be remembered as one of the deadliest marksmen in Premier League history. Van Nistelrooy came alive in the box – only one of his 95 goals in the competition came from outside the penalty area, in November 2005 vs. Charlton Athletic.

Sergio Agüero’s upcoming departure from Manchester City has reignited the debate about who the Premier League’s greatest striker is. Ruud van Nistelrooy is rarely considered because he simply didn’t play in the division for long enough but as five-season cameos go, it’s hard to look past the galloping Dutchman in his pomp.