The Viz: The New York Yankees vs. the Boston Red Sox Through Time | The Analyst 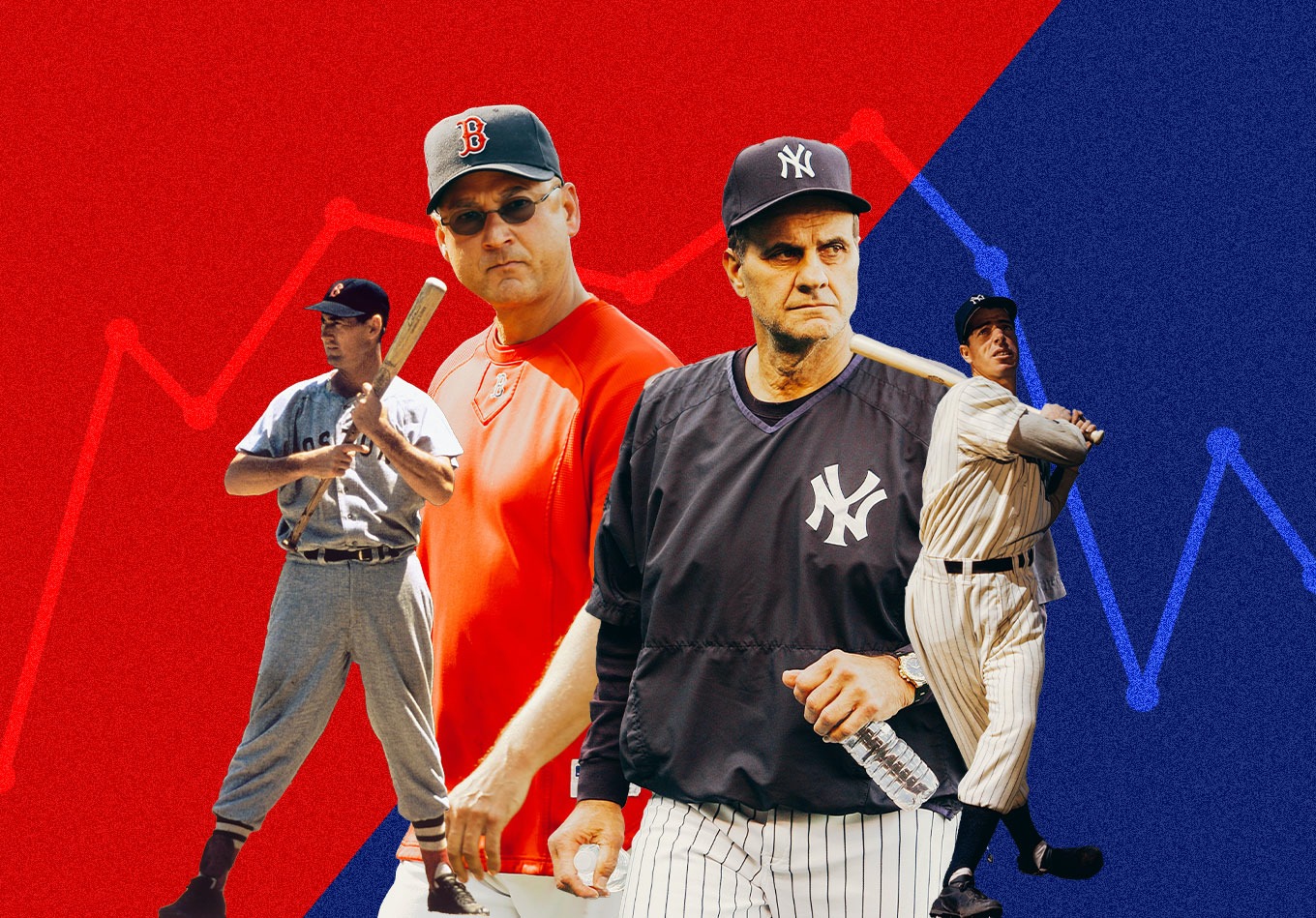 The New York Yankees-Boston Red Sox rivalry enters its 120th season this week. Telling the story comprehensively would take volumes, so we took a crack at showing it with fewer words and more data viz.

The story of a bloody sock and the image of Pedro Martinez throwing a geriatric dugout lifer to the ground by his head make for interesting enmity-driven discourse. The 1941 MVP debate can be as hot now as it was in 1942 if you’re talking to the right person. And of course there was that trade involving that guy who shifted focus from pitching baseballs for one team to hitting baseballs over walls for the other. Yankees-Red Sox lore has been told to the point of the lore probably having lore of its own. We’re a numbers destination. Sometimes advanced numbers. Sometimes predictive numbers. Sometimes just plain old baseball numbers dating back 12 decades. Sometimes looking at them without the fabulous detail that puts fat on the objective skeleton gives us a better foundation from which to understand the theatrics.

The New York Yankees-Boston Red Sox rivalry enters its 120th season this week. It finds itself, as it usually does, in fine form entering 2022, guided by two managers averaging more than 94 wins per 162-game season. It may not be the most historically even rivalry, but while some people value the whole book, some only remember the beginning and the end, and the Boston Red Sox bookend baseball history better than anyone right now.

This baseball season, we’re going to do a series called The Viz, in which we let data visualizations and tables do a bit more of the talking. Yankees-Red Sox first, Giants-Dodgers and Cardinals-Cubs on the way. Enjoy.

And don’t forget those 14 regular-season ties between the two. On the one hand, if you were at one of those games, you probably didn’t get your money’s worth. On the other, the last one happened in 1958 and you’re still living so you’ve probably had a life that makes up for it.

Through 1968, both teams competed for the AL pennant. Then came the divisional breakdown within both the AL and NL. Dating to 1969, the Yankees have won 19 AL East titles. The Red Sox have claimed 10. They tied with 95-67 records in 2005, but the Yankees won the season series 10-9. Five of Boston’s 10 have come since 2007, while New York has settled for four in the same period:

So part of the reason the Yankees have only reached the World Series once in the past 18 seasons is their main rivals have been better at standing in the way.

If we look at the series by decade, the Red Sox owned the early years, but the 1920s weren’t just a shift in power. The Yankees dominated the decade like no other with a series-record 149 wins:

Some of those 10-year breakdowns are close enough to have been swayed by a single winning streak. There have been six double-digit winning streaks in the series history, and while the Red Sox own the longest, which overlapped with the opening of Fenway Park on April 20, 1912, the Yankees can claim the next five:

In a lengthy history such as this, there are going to be seasons in which the teams are evenly matched. In others, not so much. In the dropdown below, we’re looking at each team’s season-by-season numbers, then comparing them to a 10-year moving average for each metric. The seasons in which they stray drastically from those rolling averages are highlighted. Note, for example, the modern-era record .872 OPS of the 1927 Yankees, or, far less prolifically, their .214 team average in 1968. There’s the 26 team shutouts by the 1918 Red Sox – all of which were also individual complete game shutouts, including one by Babe Ruth. And remember some of those seasons – like 1994, 1995 and 2020 – had abbreviated schedules, so the season totals will naturally be lower.

Over the last 35 years since Boston lost to the New York Mets in the 1986 World Series, it’s only won the regular-season series with the Yankees 13 times. Dating to 2000, they’ve won six of 22 season series. That includes 2021, a season in which the teams combined for 184 wins.

But 92-win seasons are commonplace for both franchises and don’t come close to cracking the top regular seasons in their histories. The most recent team to come close to this list was the 108-win 2018 Red Sox (.667 winning percentage). Note we’re eliminating ties here. For example, the 1915 Red Sox had four of them. Can’t fault a team for needing to catch a train to Philly.

Pictured above, that’s 1927 Yankees manager Miller Huggins between Babe Ruth and Lou Gehrig. Huggins won 1,067 regular-season games with the Yankees and managed some of baseball’s most dominant teams, but that’s hardly enough to top this next list.

The Yankees have had 33 managers. The Red Sox are at 48. Among those to manage at least 136 games (a full regular season for the then-New York Highlanders back at the start of this in 1903), the top winning percentages (again eliminating ties) are in the low-.600s.

You’ll notice the name Joe McCarthy (pictured) on there twice. His career began with the Chicago Cubs and ended with the Red Sox with a fine regular-season record, but his best years came in between with the Yankees. In Boston he was a part of the eight-decade heartbreak, finishing a game behind Cleveland in 1947 for the AL pennant, then a game behind New York for the 1948 pennant with 96 wins both seasons.

Regular-season success is just the starting point for both teams. More is expected of their bosses. Among those 81 total managers, only 28 have managed in the postseason and 25 have playoff wins to their names. Here’s a breakdown of winning percentages by regular season and the playoffs for all managers to win at least one of each. Rather unfortunately, Joe Morgan’s 0-8 playoff record won’t make it into this one:

McCarthy’s Yankees seasons standout with 29 playoff wins to nine losses for a .763 winning percentage, but Casey Stengel won 37 postseason games – all of which came in the World Series given he managed before the divisional era. Joe Torre – whose time with the Yankees came exclusively in the wild-card era – went 76-47 in the postseason, so he won more than twice as many playoff games as any other Yankees or Red Sox manager. Yes, league structure and rules changes matter.

Current Boston manager Alex Cora fell just outside of the top 10 regular-season winning percentages above (.584), but his 17-8 playoff record deserves some attention. His .680 postseason winning percentage is third best among the 28 managers, behind only the Bronx version of McCarthy and Boston’s Bill Carrigan (8-2, .800), who won back-to-back World Series for the Red Sox in 1915-16.

There was no such thing as a postseason rivalry between AL teams until 1969, and for teams in the same division, it wasn’t a thing until the wild-card era. It’s a small sample size, but the Yankees-Red Sox postseason series is even at 12-12. It started off with the Yankees winning 11 of the first 15, but that changed on Oct. 17, 2004 when Boston won its first of five straight (four in this series) after losing the first three games to the Yankees in the ALCS. Since, the Red Sox have won eight of nine. Mariano Rivera won the first playoff meeting back in 1999 and five years later blew the save in the game that changed the course of perhaps the most memorable playoff series ever.

The longest winning streak in the overall series belongs to Boston (five), but there’s no question of which team historically owns Major League Baseball’s postseason:

The New York Yankees have appeared in more than a third of modern World Series (the first was 1903, though they weren’t in it). And of those 40, they’ve won over twice as many as they’ve lost (27-13). New York’s 27 World Series wins are closer in comparison to the rest of the American League (39) than they are to any single MLB franchise. But more than a fifth of those remaining belong to the Red Sox – not bad for a team once famous for not winning the World Series. Boston has also won nine of the 13 it’s appeared in, so it turns out the team that for so long sucked at winning the World Series has been historically and comparatively a very prolific and proficient winner of the World Series. What this ultimately means is of the 117 modern World Series, the two AL East rivals have combined to win over 30% and over half of the AL’s 66 crowns.

Four of those Boston titles have come in the past 18 seasons. In that time, only two other teams have won it multiple times. Neither of them are named the New York Yankees, who in that time have reached the Fall Classic less frequently than fellow division foes the Tampa Bay Rays. History is one thing, recency is another.

The then-Boston Americans won the first modern World Series in 1903, and the franchise took five of the first 17 titles, including four in seven years from 1912-18. Then they traded the pitcher who won two games in the 1918 World Series to New York. Babe Ruth stepped off the mound, spent more time in the batter’s box. With Ruth’s power hitting came the Yankees’ swing in fortunes, and by 1937, baseball’s most successful team as measured by World Series wins became the New York Yankees with six titles in nine appearances. The Red Sox were stuck on five in five appearances, the last of which was 1918. Connie Mack’s Philadelphia Athletics had won their fifth in seven appearances in 1930.

The longest combined championship drought for the Yankees and Red Sox is 16 seasons in which a World Series was played, spanning 1979-95 (no postseason in 1994), followed by 14 seasons from 1963-76. Outside of that 1963-95 period, the longest the two franchises have gone without winning a title is seven seasons (1904-11 with no World Series playing in 1904). And since the Yankees broke through under Joe Torre in 1996, the franchises have combined to win nine of 26 Fall Classics. More than a third, that is. So, while baseball’s postseason may have changed, the frequency with which these franchise win titles isn’t exactly decreasing with more teams in the league and larger playoff fields.

That’s at least in part been because of how the modern Red Sox have made the most of reaching the World Series. Since Boston’s 1986 loss to the Mets, it has gone 16-3 in World Series games. And maybe that record makes more sense than it should – once they get that far, the Red Sox don’t have to play the Yankees.