Yet Another Century: Analysing Kohli’s Test Record Ahead of His 100th Cap 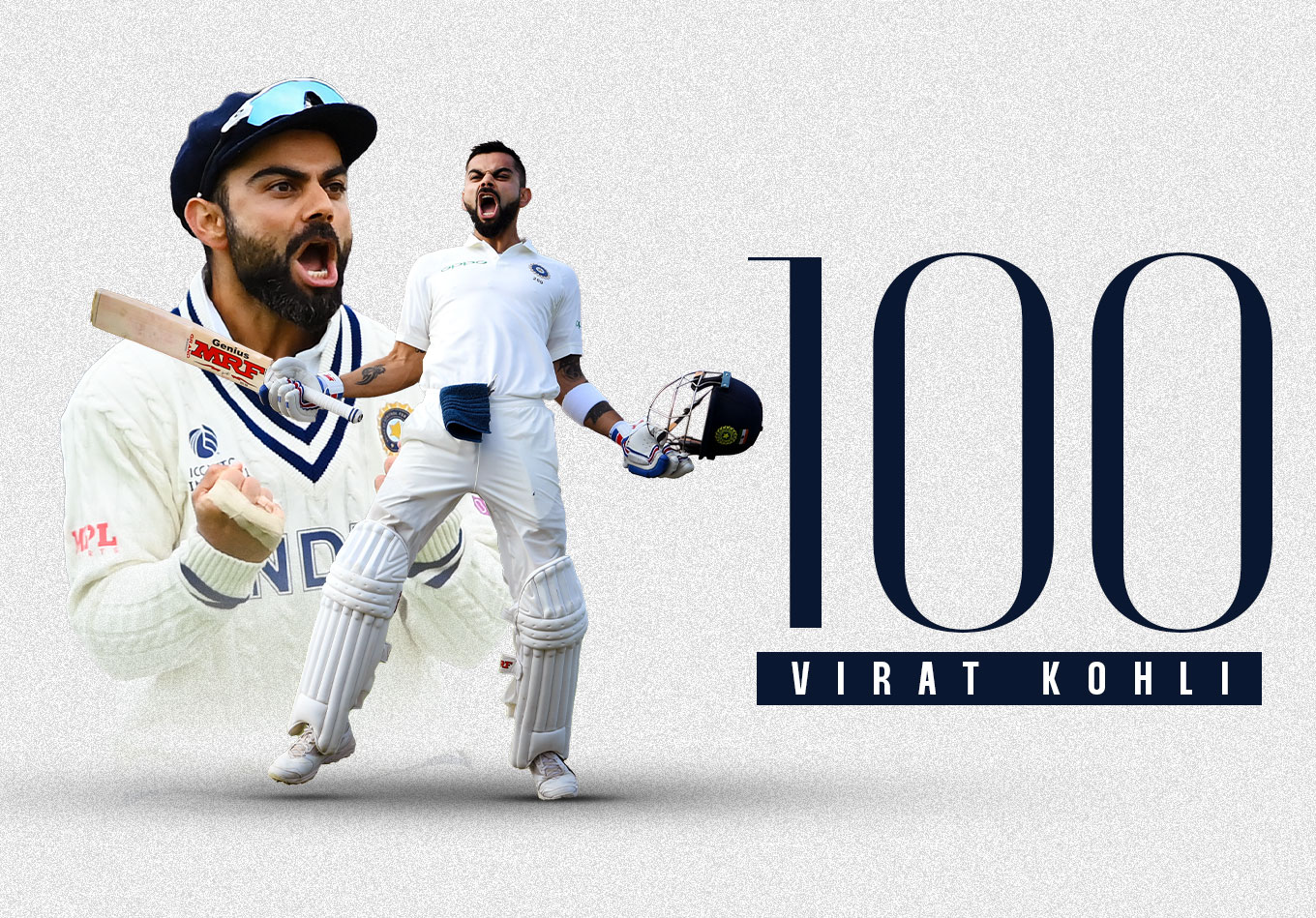 Yet Another Century: Analysing Kohli’s Test Record Ahead of His 100th Cap

A high-spirited teenage cricketer from Delhi instantly shot to stardom after leading India to just their second U19 World Cup title in Kuala Lumpur, Malaysia in 2008. After impressing the BCCI’s then chief selector Dilip Vengsarkar on the Emerging Players tour to Australia, 19-year-old Virat Kohli was fast-tracked into the national setup in August 2008 against Sri Lanka.

Virat went on to debut in the first ODI and played all five matches, making scores of 12, 37, 25, 54 and 31. A year later, Kohli’s stature in the team grew and he cemented his place in the ODI team batting at three or four. By the end of 2010, he was part of India’s limited-overs setup in both formats and was also an integral part of the 2011 World Cup winning Indian team.

Such was his consistency that he was handed his maiden Test cap on 20th June 2011 against the West Indies at Sabina Park, Jamaica. He was one of three debutants in that match, alongside Praveen Kumar and Abhinav Mukund.

Fast forward to 2022 and Virat is set to play in his 100th Test match, in Mohali against Sri Lanka. In doing so, Virat will become the 12th Indian Test player to don the Indian jersey in 100 or more games.

As he celebrates this milestone, we dive deeper into his performances in the longest format of the game. What does it mean to be Virat Kohli in Test match cricket?

Calling Kohli a batting legend would be an understatement. A cursory glance at the lengthy list of his records demonstrates Kohli’s greatness while also revealing his stature as a modern maestro. His 100th game could be extra special as he is just 38 runs away from becoming the sixth Indian batter, and the 32nd overall, to reach 8,000 runs in Test cricket.

Most Men’s Test runs for India:

Since his debut in the format, Virat has been the highest scorer in 16 of the 99 matches he has played, a record only bettered by England’s Joe Root (21), who has played considerably more matches in this period.

His ability to bisect field placements with a combination of bat-speed and strong flexible wrists leaves bowling attacks frustrated. Those quick wrists help him quickly get under the ball and slap it in the arc between square-leg and mid-wicket. The 33-year-old, in fact, has scored 34% of his Test runs in this area, accumulating 2,713 runs through that region.

His other strong scoring area is through the offside. A propensity to push at balls well outside off-stump to play his glorious off-drives has resulted in him scoring 33% of his Test runs between point and cover in his career to date.

However, that strength has also been his undoing on pitches that offer seam movement or sharp spin, as Kohli sometimes goes hard at the ball without getting his front foot fully forward and across. In fact, Kohli has been dismissed 115 times via balls in the outside off channel. Furthermore, if we look at dismissals by shot type, then although Virat has scored the most runs via drives (2276 runs), he has also been dismissed 40 times while playing this shot, 14 times more than any other attempted shot type.

On 2 April 2011, Indian cricket witnessed the end of a 28-year wait to lift the World Cup for a second time. Fresh from that win and after carrying Sachin Tendulkar on his shoulders for a victory lap, the then 22-year-old Kohli paid tribute to the Little Master, saying “He has carried the burden of the nation on his shoulders for 21 years; it was time we carried him.” Little did one know that for the next decade, Virat himself would be the flag bearer for Indian cricket, justifying his reputation as the heir to Tendulkar.

Isolating India’s run scorers to middle-order batters only (spots four to seven), and Virat jumps to second in Tests (7865 runs), with only Tendulkar scoring more middle-order runs than the Delhi native (15906 runs), although it should be said that Virat has batted in roughly half the number of innings that Sachin has batted in. Kohli (51) is also the only other Indian batter apart from Sachin (54) to have averaged more than 50 in Tests while batting in the middle-order (min. 50 innings). Furthermore, Virat has registered 27 Test tons while batting in the middle-order for India, a stat only bettered by his idol Tendulkar (51).

When it comes to Indian batters coming in at No. four in Tests, Virat tops the list with the best batting average (55), better than even Tendulkar’s 54 (min. 20 innings). Only Sachin (13492) has scored more runs while batting at No. 4 for India in Tests than Kohli’s 6430, although Tendulkar has batted in 150 more innings in the format than Kohli.

Virat also has struck 23 centuries coming in at four for Team India in the Tests, second only to Tendulkar’s 44 tons and 11 more than the next batter on the list (Gundappa Viswanath with 12).

The Best of the ‘Fab Four’?

Cricket fans have constantly been engaged in the debate over who is the best batter in the world. This debate has led to the creation of the ‘Fab Four’, an elite group of batters consisting of Virat Kohli, Steven Smith, Joe Root and Kane Williamson, who by majority consensus are the best at their trade right now. The four started their Test career around the same time and are torchbearers for their respective teams in Test cricket.

The Fab Four Since Kohli’s Debut:

At home, Kohli averages 63. Comparing that to the others in the Fab Four, only New Zealand skipper Kane Williamson (65) averages more at home. Similarly, Kohli registers a ton every 5.2 innings in home Tests, second only to Williamson’s 5.1.

One main reason why Kohli’s record is so good is due to his ability of scoring runs even away from home. Virat has scored 4196 runs in 100 innings in away Tests, second only to Root’s 4591 runs. He has also smashed a century every 7.1 innings in away Test games, a feat only bettered by Smith (5.7) among the Fab Four.

Virat’s ability to convert fifties into hundreds has also been a major reason why he has been dominant in all formats of the game. He boasts the best conversion rate of all the Fab Four batters: a 52% rate at home, 47% away and 49% overall.

Virat has top-scored in 40 innings since his debut in the format, only Joe Root has top-scored more in an innings during this period. Furthermore, Virat has been the top scorer in 24 games for his team, again only bettered by Joe Root (31).

When Virat Kohli took over the Test captaincy from MS Dhoni in 2014, India were languishing in 7th in the Test rankings. When the former decided to step down from captaincy after the South African series in January 2022, India were atop the rankings.

Not only is Kohli the most successful Indian Test skipper (in terms of matches won and win %), but he has also led the nation most often. In fact, Kohli ranks sixth on the list of players to have played the most Test matches as captain, whilst only Graeme Smith (53), Ricky Ponting (48) and Steve Waugh (41) have won more Test games as captain than Kohli (40).

Most Test Matches as Captain:

The primary reason behind these incredible numbers is that under Kohli’s leadership, his bowlers have flourished. In fact, Kohli-led India picked up 20 wickets on 22 occasions out of a possible 37 chances. Such was the dominance that no other Indian team has had a bowling average of less than 30 (min. 10 games).

By his highest of high standards, Kohli is currently suffering a slump in form. The hundreds that had become the norm almost every series seem to have deserted the maestro for more than two years now. However, given that Virat is about to start a home series against an unfancied Sri Lankan side, Kohli, fresh from relinquishing the captaincy burden, will look to make amends by scoring heavily in the upcoming games. The legend lives on…