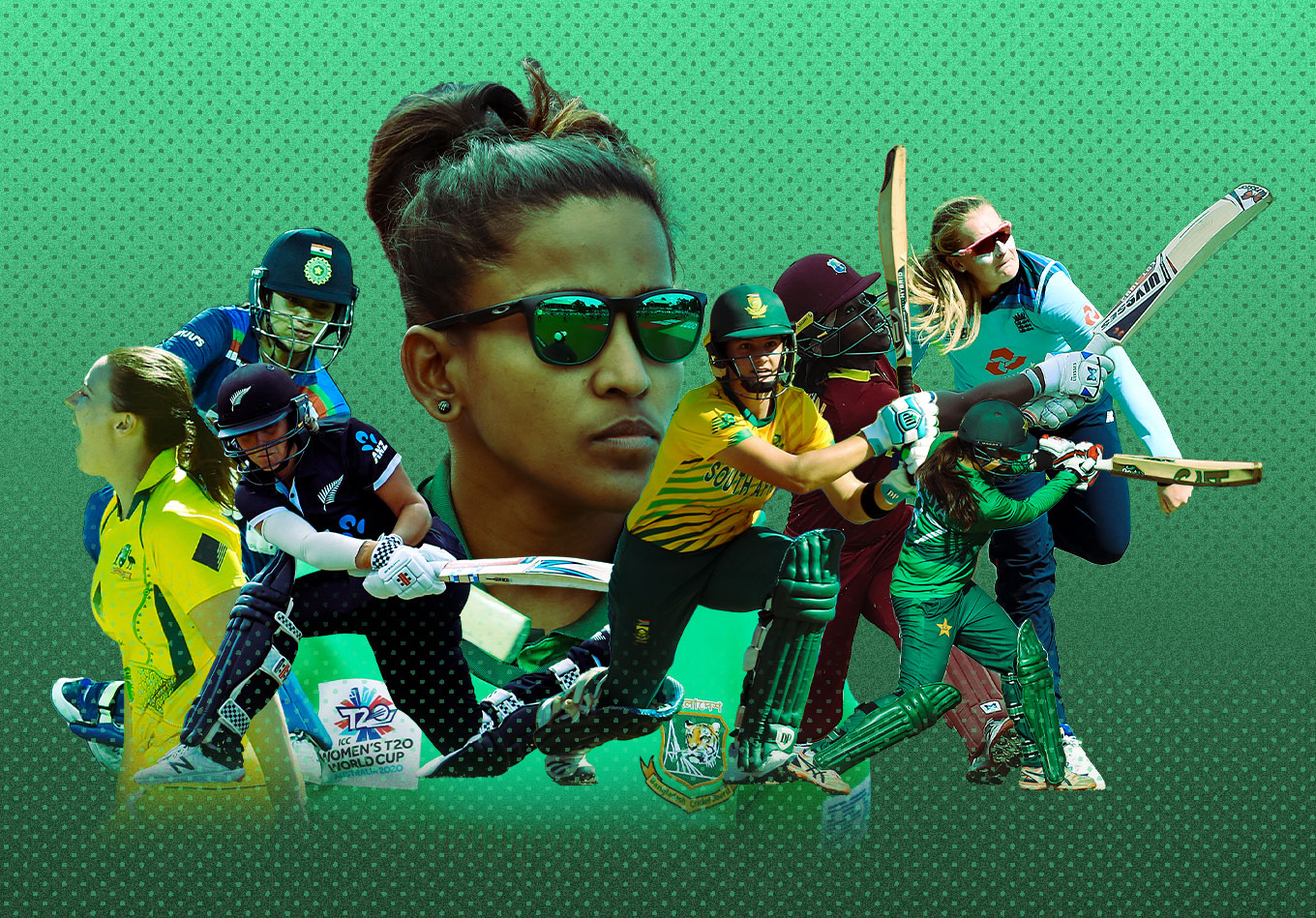 As we approach the start of the 2022 ICC Women’s World Cup, we harnessed the expertise of our esteemed cricket data editors to profile one player from each side who could make a massive impact this year.

In the last few months, Australia’s Tahlia McGrath nervelessly grabbed her opportunity in a scintillating season of international cricket on home soil, receiving the award for player of the series in the 2022 women’s Ashes. The genuine all-rounder now figures to play a key role in her side’s title aspirations at the Women’s Cricket World Cup 2022 in New Zealand.

McGrath took the most wickets (6) in the ODI iteration of the recent women’s Ashes campaign at an impressive strike rate of 19.3 – the best of any player to feature in more than one match. Indeed, she is beginning to follow in Ellyse Perry’s legendary footsteps as one of the next great all-rounders for Australia in women’s international cricket. With the bat, only Beth Mooney (63.2) has a better batting average amongst Australian players in women’s ODIs than McGrath (42.3) since the beginning of 2021.

In Australia’s List A competition, the Women’s National Cricket League, McGrath has shown an ability to make an impact on the scoreboard and keep the run rate ticking over. 69% of her 298 runs for South Australia during the powerplay have come from boundaries. Amongst players to have scored at least 100 runs during this period only established batters Meg Lanning (76%), Grace Harris (75%) and Alyssa Healy (71%) have narrowly better rates.

Having initially debuted in 2016 she missed out on selection for the 2017 World Cup, and then had a three-year period without playing any international cricket. Since 2021 though, she has forced her way back into the setup and not taken a step backwards. She now looks set to be a mainstay in all formats for the tournament favourites Australia.

Ranked number two on the ICC’s ODI bowler rankings, Sophie Ecclestone is sure to be a key weapon in England’s armoury as they bid to retain the trophy they claimed back in 2017. Since that famous triumph at Lord’s five years ago, Ecclestone has taken 52 wickets, only South Africa’s Shabnim Ismail has more, and with a miserly economy rate of just 3.7, she is undoubtedly one the best spin bowlers in the women’s game at the moment.

In this timeframe, she has recorded more overs than any other bowler and of the 47 players with 100+ overs, only four have a better economy rate than Ecclestone (3.69). This form was as evident as ever in the recent Ashes series in Australia, with only Ellyse Perry (2.3) managing a better economy than Ecclestone (2.5), who was the only person to bowl the maximum 30 overs across the three ODI fixtures.

Only 39% of the balls Ecclestone bowled in those ODI fixtures saw an attacking shot played, the third-best rate of the 17 bowlers from either side who bowled in the series. Her ability to stifle the flow of runs in the middle of the match will be key if England are to take control of matches, allowing others to take the wickets to see them home or giving the batters lower targets to chase down.

Despite being just 25 years old Smriti Mandhana has already won the Rachael Heyhoe-Flint Trophy as the ICC Women’s Cricketer of the Year twice (2018 & 2021). The Indian superstar is the only player aside from Australia’s Ellyse Perry to have been bestowed with this honour more than once in her career. Team India have been finalists of the ICC Women’s Cricket World Cup twice before, most recently during the last edition where they failed to get over the final hurdle against England (also 2005). As the 2022 edition approaches, a lot of the country’s hopes to finally win the title rest on the shoulders of Mandhana.

The Indian has four centuries in ODIs. With these knocks coming in each of the SENA nations, she is the only Indian woman to achieve this feat. What is even more impressive is her strike rate coming in as an opener. She has a rate of 91.4 since the beginning of 2017, by far the best of any India player to have scored at least 500 runs during this time.

In the recently concluded Women’s Big Bash League, Mandhana became the first Indian to score a century. She struck an unbeaten 114* for Sydney Thunder against Melbourne Renegades, equalling Ashleigh Gardner’s record set in 2017 for the highest score in the tournament’s history. The Indian opener was impressive with her form during the competition, striking a boundary every 5.8 balls, the second-best rate in the tournament for any player to have scored a minimum of 250 runs. If India are to have any chance of making amends for their heartbreak from the last edition, Mandhana will have to be at her very best during the tournament.

Winning trophies with your country is what all athletes desire and Laura Wolvaardt is on the prowl for just that. The 22-year-old right-handed opening batter heads into this tournament on a good run of form. In the recent ODI series (January 2022) with the West Indies, she scored 171 runs across four matches, including a match-winning century which drew her level with fellow opener and 2021 Women’s ODI Cricketer of the Year Lizelle Lee for the most ODI tons for South Africa.

Despite her young age, Wolvaardt is an experienced campaigner with 2,482 runs in 65 ODI innings, including 21 half-centuries. Her valuable experience in the 2017 Women’s Cricket World Cup will make her a key campaigner for South Africa. Back then she scored 324 runs, the most ever scored by a South African player in a single edition of the tournament.

The opening batter has experience far beyond her years and will be a vital cog for a South Africa side that will have high hopes. Named as her country’s Under-19 cricketer of the year when she was just 13 and top of her class at school, she turned down an offer at medical school to pursue cricket. This time she will be aiming for another milestone – lifting the Women’s Cricket World Cup.

Deandre Dottin is well known for her dominant and aggressive style of batting which allows her to register some of the quickest runs scored. It was in 2010 when Dottin became the first player to score a hundred in Women’s T20Is, getting to the milestone in just 38 balls, ranking it as the fastest such score to this day.

A big hitter of note, the 30-year-old from Barbados has a similar pedigree in ODIs, amassing the most sixes in the format since the beginning of the decade (2020) as well as the third most fours (83). This total of 96 boundaries is the second most behind only Lizelle Lee of South Africa (109).

Dottin registered the joint highest women’s ODI score in 2021 (132 vs. Pakistan), alongside the year’s leading run-scorer, Lizelle Lee. In total, she scored 460 ODI runs at 38.3 in 13 innings in 2021, the fourth most runs of any batter, and smashing the highest number of runs (84) from boundaries of anyone.

In the Women’s Cricket World Cup she also has strong form, having scored three half-centuries. Alongside Stafanie Taylor, that’s the most half-centuries scored by a West Indian player.

Playing in and winning a World Cup for your country is what every cricketer dreams of and what’s better than being the star of the show in that triumph. Deandra will lead this charge for the West Indies.

Arguably the most vital batter for Pakistan, Aliya Riaz will enter the 2022 ICC Women’s Cricket World Cup in the form of her life. Batting at number six or lower, Riaz has scored 382 runs in ODI matches since the beginning of 2021, the most by any player operating at this part of the batting order in the format. In fact, this is also the most runs scored by any batter for Pakistan in women’s ODIs during this period.

Going back further, Riaz is the top scorer for Pakistan in ODIs since the start of 2019, accumulating 602 runs at an average of 33.4 from 21 innings. She has also managed four scores of 40+ in four of her last five innings in the format, scoring an aggregate of 202 runs during this period, her most ever in a five-innings span.

Of late, Riaz has also forged a formidable pairing with compatriot Nida Dar. Together, the duo has put on 348 runs in five innings since the start of 2021 in ODIs, the fifth-highest tally by any pairing in the format during this span.

Riaz has only managed a strike rate of 70.9 in ODI matches since the start of 2021, but a major reason for that is the reconstructive role she’s had to play. Out of the 11 games Riaz has batted in during this period, she’s had to walk into the middle before the end of the 25th over on five occasions despite never batting above the No.6 spot.

Having said that, Riaz does have the ability to clear the ropes. She’s smashed nine sixes in ODIs since the beginning of 2021, the second-most by any batter in the format during this period, behind only West Indies’ Deandra Dottin (13). Her ability to play both the anchor as well as up the ante will give Pakistan a great chance of finishing their innings on a good note in the upcoming World Cup.

At just 21 years old, Amelia Kerr is the second-youngest player in New Zealand’s squad for the ICC Women’s Cricket World Cup 2022 (behind 17-year-old Fran Jonas) but has already accumulated quite an incredible CV in the ODI arena.

Owner of the highest score in women’s ODI history (232* vs. Ireland – 13 June 2018), Kerr is one of just two players in the history of the format to score a double century, after Belinda Clark’s 229* for Australia against Denmark in December 1997. Her exploits since that magnificent knock show she hasn’t just been a one-hit-wonder for the Silver Ferns either. Indeed, Kerr has scored 50+ in each of her last three ODI innings (119*, 67, 68*) as of 22 February 2022.

Kerr’s ability as an all-rounder makes her even more dangerous. Her five innings of 4+ wickets is the joint-most by any New Zealand player in women’s ODI history (together with Leigh Kasperek and Aimee Watkins). One of those hauls came at a previous Cricket World Cup (4-51 vs. England – 12 July 2017). If Kerr can claim a second such haul at this tournament, she would become just the second player from New Zealand to do so multiple times after Jackie Lord.

Having recently risen up to sixth on the ICC’s Player Rankings for Women’s ODI all-rounders, her class is there for all to see. With the home fans behind her, she will be hoping she can guide her side to a second World Cup win after their triumph 22 years ago, the last time the event was hosted in New Zealand.

With Bangladesh appearing at their first-ever Women’s Cricket World Cup in New Zealand, all eyes will be on all-rounder Rumana Ahmed. A dependable middle-order batter who is equally good with the ball, Ahmed has been one of the mainstays of the Bangladesh side since her debut in 2011.

With more than a decade of experience behind her, Ahmed is the leading run-scorer for the Bangla Tigresses in the format (893). Playing in the middle-order, she dons the role of an anchor for her side but can equally accelerate when the situation demands. Averaging more than 60 since 2019 (62.5), she boasts a strike rate of 55.4, which is the best rate for any Bangladeshi batter in the format (min. 20 innings). In fact, no other Bangladeshi batter has struck more boundaries in the format than Ahmed’s 85.

Calling Ahmed a genuine all-rounder and indeed one of the finest in the world at present is not an understatement. The former skipper is Bangladesh’s highest wicket-taker in ODIs with 45 scalps at an average of 24.3 and also has 15 catches for her nation, topping the charts there as well.

Her three-wicket haul and brilliant unbeaten half-century were critical to Bangladesh beating Pakistan in the Women’s World Cup qualifier late last year and exemplified her importance in a team that is debuting in the multi-nation competition this time around.