Crunch Time in the UWCL: Barcelona vs. Real Madrid | The Analyst 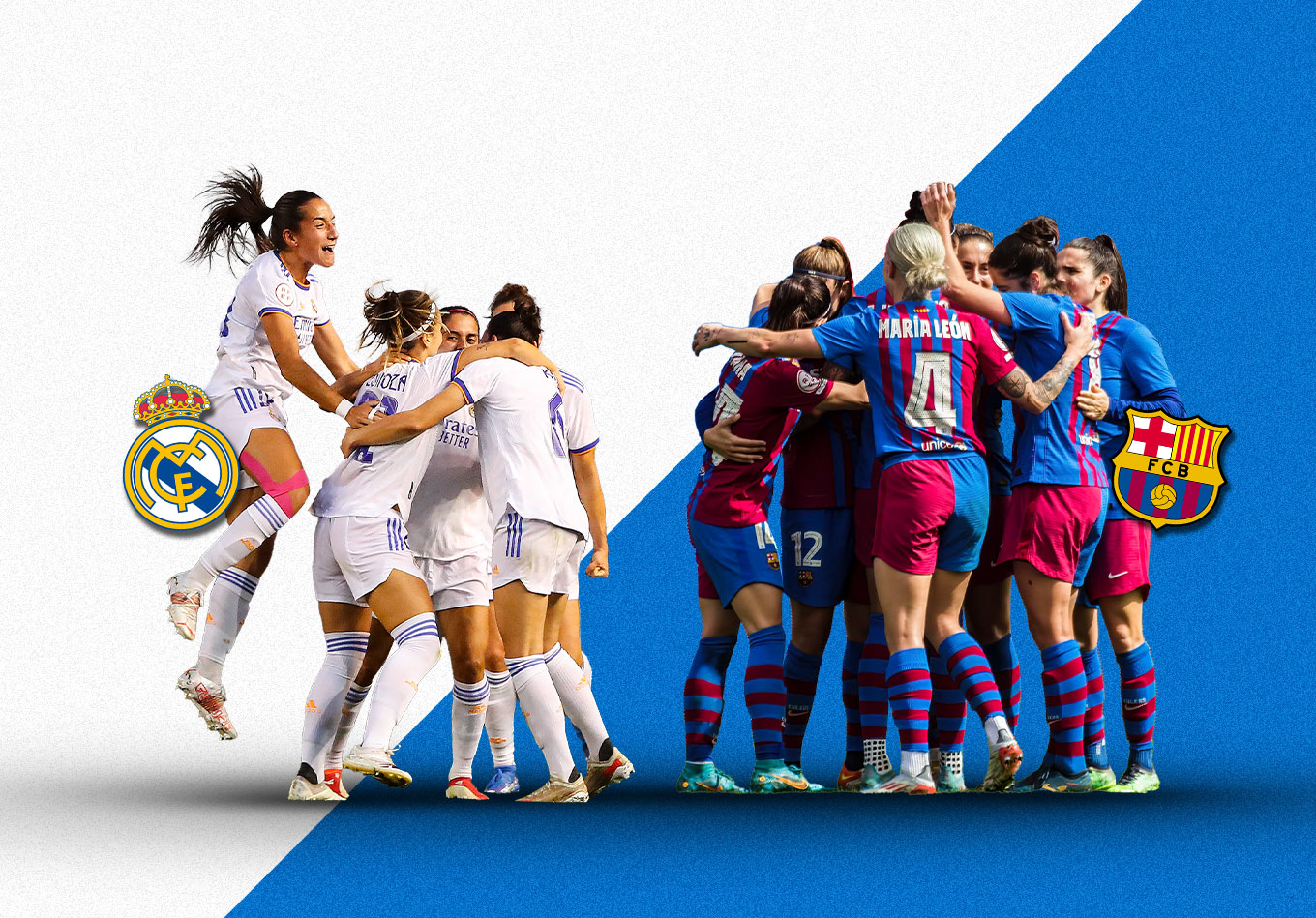 Crunch Time in the UWCL: Barcelona vs. Real Madrid

The UEFA Women’s Champions League has reached the knockout stages, with four big quarter-final ties to be played across March. One of those ties sees Real Madrid play rivals and reigning champions Barcelona.

The 2021-22 UEFA Women’s Champions League was the first to have a group stage following the reorganisation of the competition in 2009. Only half the 16 teams remain in the competition as we head into the knockout stages, with possibly the biggest surprise being the departure of English WSL champions Chelsea in the groups on head-to-head goal difference.

Reigning Champions League winners Barcelona were as dominant as expected in Group C, but if anything their performances exceeded expectations.

The main ingredient for Barcelona’s success has been their ability to play the ‘Barca way’ with their club ethos of tiki-taka shown throughout their group stage performances.

Barcelona held at least 64% possession in all six of their group stage matches, with their group stage average of 72% being the highest of any side. They completed 90% of their passes, with that ratio being 87% in the opposition half, while averaging almost five passes per sequence (4.9).

Barca also led the way in the UWCL group stage with 140 open play sequences of 10 or more passes – 48 more than the next highest, Arsenal (92) – while they had a competition-high 45 of those ending with either a shot or touch in the opposition box. Further proof of their possession having purpose is that of the 23 passing sequences that have seen at least 15 passes leading to a shot, over half (12) were by Barcelona in the group stages of this UWCL.

Field tilt is a metric to show the territorial dominance between teams. Put simply, it measures the share of possession a team has in a game, considering only touches or passes in the attacking third. It can be useful when trying to understand which team is more dominant in games, rather than looking at overall possession, mainly as it looks at how teams are able to get the ball into areas that matter.

Barcelona’s field tilt average is 91% in the Women’s Champions League this season in the group stage, meaning they have nine times as much possession in the final third as their opponents – the highest in the competition ahead of Paris Saint-Germain (83%) and the knocked-out Chelsea (76%).

The Catalan side have started their open play sequences 53 metres from their own goal line on average in the group stage, further up the pitch than any other side and impressively in the opposition half. Yes, you did read that correctly.

It’s not only with the ball that Barcelona impress, as their ability to win possession back from opponents high up the pitch is second-to-none in the UWCL this season. Despite possessing the ball for almost three quarters of the time, they have forced the most high turnovers in the competition this season (128), with 29 of those ending shots and six directly leading to a goal. Unsurprisingly, they lead each category.

Of Barcelona’s total regains of possession in the UWCL this season, 20% have come in the final third of the pitch, with midfielder Aitana Bonmati leading all players in this metric (14). Bonmati’s ability to win the ball high up the pitch has also helped her find positions to start attacks – her 12 secondary chances created (the pass before the chance created for a shot) are a competition high in 2021-22. She finds herself behind only teammate Alexia Putellas with regards to chances created and secondary chances created combined (20 vs. 31).

This quarter-final tie will see the two most defensively-solid sides in the 2021-22 edition – with Barcelona’s record of one goal conceded in six games being trumped only by PSG’s phenomenal record of six clean sheets in the group stage.

The Catalans have faced only 27 shots – fewer than any other side in the UWCL this season, despite facing two of the most potent sides in front of goal in the groups: Arsenal (14 goals) and Hoffenheim (11).

Real Madrid are competing in their first UWCL season, so to make it through the group stage was an achievement – although being placed alongside Zhytlobud-1 Kharkiv and Breiðablik, it was expected that they would join PSG in qualifying for the quarter-finals.

Their four games against those two teams in the group stage saw a cumulative score of 12-0, but coming up against an established, top-class opponent in PSG was a different proposition altogether, as they suffered 4-0 and 2-0 defeats.

Barcelona will provide a level of opposition like that of PSG and judging on their league meetings since the start of 2020-21, Real Madrid have a lot to fear. Barcelona won 4-0 and 4-1 on the way to winning the 2020–21 Primera División by 25 points ahead of Real, and then 3-1 earlier this season before this weekend’s 5-0 victory to seal the league title on 13th March.

Despite suffering defeats in their two games against PSG, Real Madrid did try to keep possession – something Barcelona will be wary of. In fact, in their home match against them, Real kept more possession than the French club (51%).

Neither of those matches against PSG came with current boss Alberto Toril in charge, however – he replaced David Aznar on 29th November. Since his arrival, Real Madrid have won 12 and lost three of their 15 competitive matches – the major issue, however, is that those three defeats have all come against Barcelona, with the two league defeats coming alongside a 1-0 loss in the Spanish Supercopa. The 12 wins have seen them concede just three goals overall – three times fewer than the three games versus Barca (9), so for any hope of causing a shock in this game then they’ll need to hope Barcelona somehow lose their firepower.

Of the four quarter-final ties, this one will be the first to be decided on 30th March. The odds of reaching the semis and coming up against the winner of Arsenal and VfL Wolfsburg seem stacked in Barcelona’s favour, but Real Madrid will hope that they can spring a surprise and fly the Spanish flag in the competition as their only remaining participant.