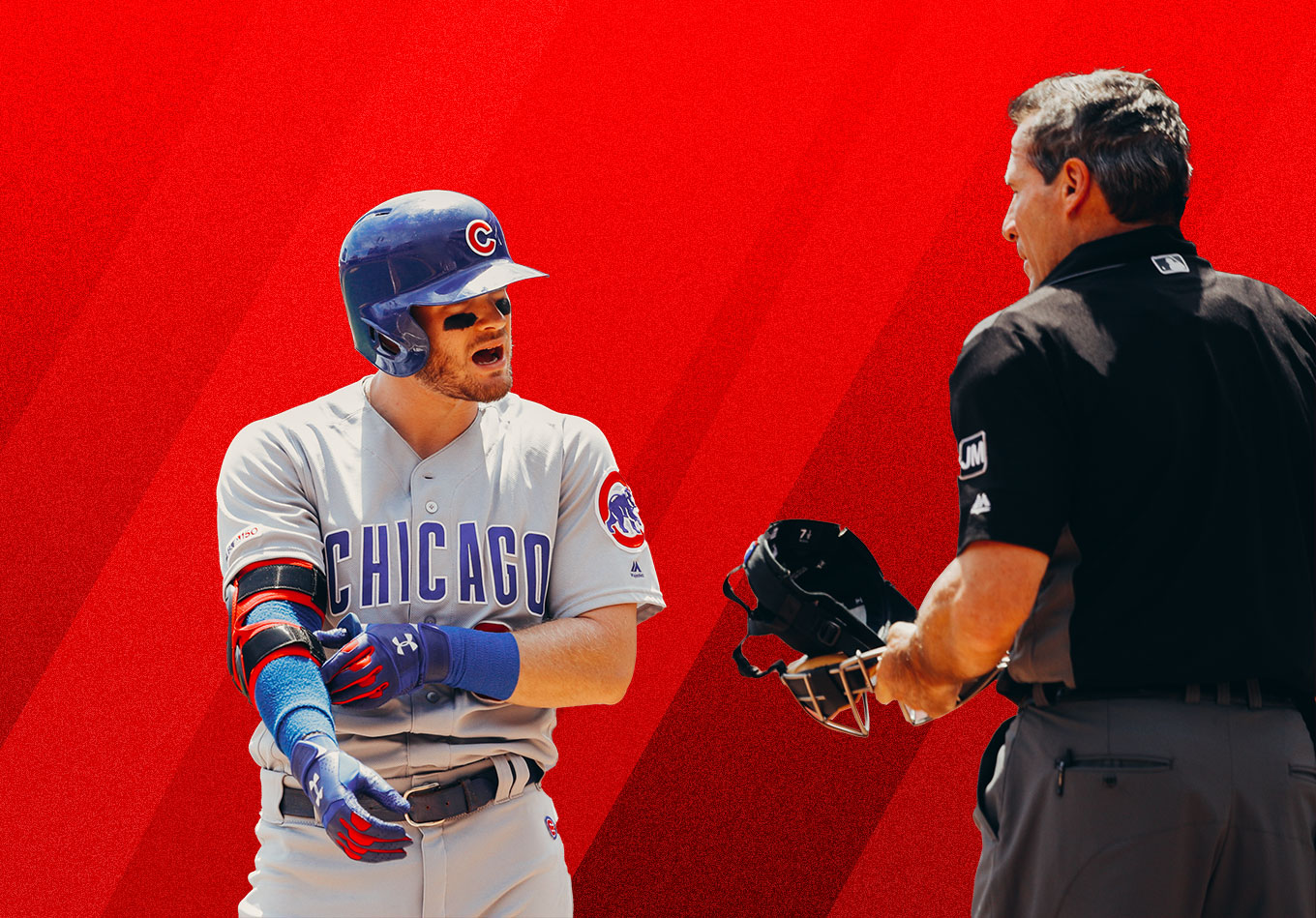 Payoff Pitch: Why Some Hitters Are No Longer ‘Protecting the Plate’ on Full Counts

Even though it goes against everything we were taught growing up, the data shows that it’s better to take a borderline pitch on a full count than to try to ‘spoil’ it. Let us explain.

It’s an issue that has come to a head in recent seasons, with one moment in time a couple years back sticking out as the culmination of a shift in philosophy.

Trailing the Washington Nationals 5-1 in the fourth inning on Aug. 24, 2019, the Chicago Cubs had the bases loaded when Ian Happ fell behind 0-and-2 before working the count full.

That set up Joe Ross’ controversial payoff pitch that umpire Vic Carapazza called a strike despite replays and the broadcast’s strike-zone plot showing the ball to be off the plate.

But it was the aftermath of perhaps the game’s most critical at-bat that raised questions about whether the longtime thought process of two-strike hitting had changed. Traditional instruction has stressed that batters should “protect the plate,” “spoil good pitches” and “swing if it’s close” when they get two strikes – and that doesn’t change with the count full.

That mindset remains in the mainstream, as a reporter asked Happ, who was ejected for arguing the call, a question that some critical fans were also wondering: Should he have at least tried to foul the pitch off in that situation?

“I made a good decision,” Happ told MLB.com. “You’re not going to try to foul a ball off. I’m trained that way. I’m trained to take balls.”

The following afternoon, Cubs announcers Len Kasper and Jim Deshaies backed Happ and the new-age analytic approach to 3-2 counts. Kasper disagreed with the notion that you don’t want to leave it in the hands of the umpire and should swing at a close pitch, saying “If it’s ball four, it’s ball four. You shouldn’t change your approach just because you think the umpire might make a bad call.”

Deshaies, a former left-handed pitcher who spent seven of his 12 years in the big leagues with the Houston Astros, said his former club started training its hitters to take borderline pitches on full counts several years ago.

The Astros believe, he explained, there’s a better chance of drawing a walk than getting a hit in that situation because if you do put it in play, it’s likely to be hit softly.

“There’s no valor in grounding out or popping up on a 3-2 pitch off the plate,” Deshaies added.

Houston second baseman Jose Altuve seemed to give some insight into what Deshaies was alluding to when he described his change in approach with two strikes during a 2016 interview.

“I’m no longer afraid of being called out on strikes,” the 2017 AL MVP told USA Today. “If it’s not the pitch I want, I’ll let it go. It was a matter of changing my mentality, not my swing.”

So let’s make the determination that the majors’ average hitter is at the plate and that a “borderline” pitch is defined as one that is thrown more than three inches from the middle of the zone but less than three away from the edge.

As an illustration, if the dark blue rectangle below is the strike zone, our borderline pitches would be in the orange area.

Now that we’ve set the parameters for our borderline pitch, let’s dig into the heart of the matter – should hitters swing at 3-2 pitches in these locations?

As one also might expect, called-strike percentage and xwOBA (expected weighted on-base percentage) are highly correlated in all counts, and both increase as the count moves from 0-2 to 1-2 to 2-2 to full. The metric xwOBA represents only the batted-ball component of our RVAA (expected run value above average) metric, which measures batting run value above the average hitter, quantified by runs.

But when the count goes to 3-2, how does the value of a take compare to the chance of reaching base via a batted ball? The chart below helps paint a clearer picture by analyzing the called-strike percentage on a pitch in the aforementioned zone while also looking at the xwOBA on pitches in our borderline zone.

Though this is only slightly higher than the .366 xwOBA on those counts (with no value in foul balls), it becomes a one-sided argument when swings and misses drop that number to .242.

So, contrary to old-school thinking, the data shows that it is indeed better to take a borderline pitch on a full count.

All this isn’t to argue against a hitter wanting to shorten up his swing with two strikes to make contact and avoid strikeouts on pitches in the zone.

But if teams have moved away from an “if it’s close, swing” mentality with two strikes, they certainly appear to have had good reason for doing so.