Project Arteta: How Arsenal Went From Bottom of the League to Top-Four Favourites 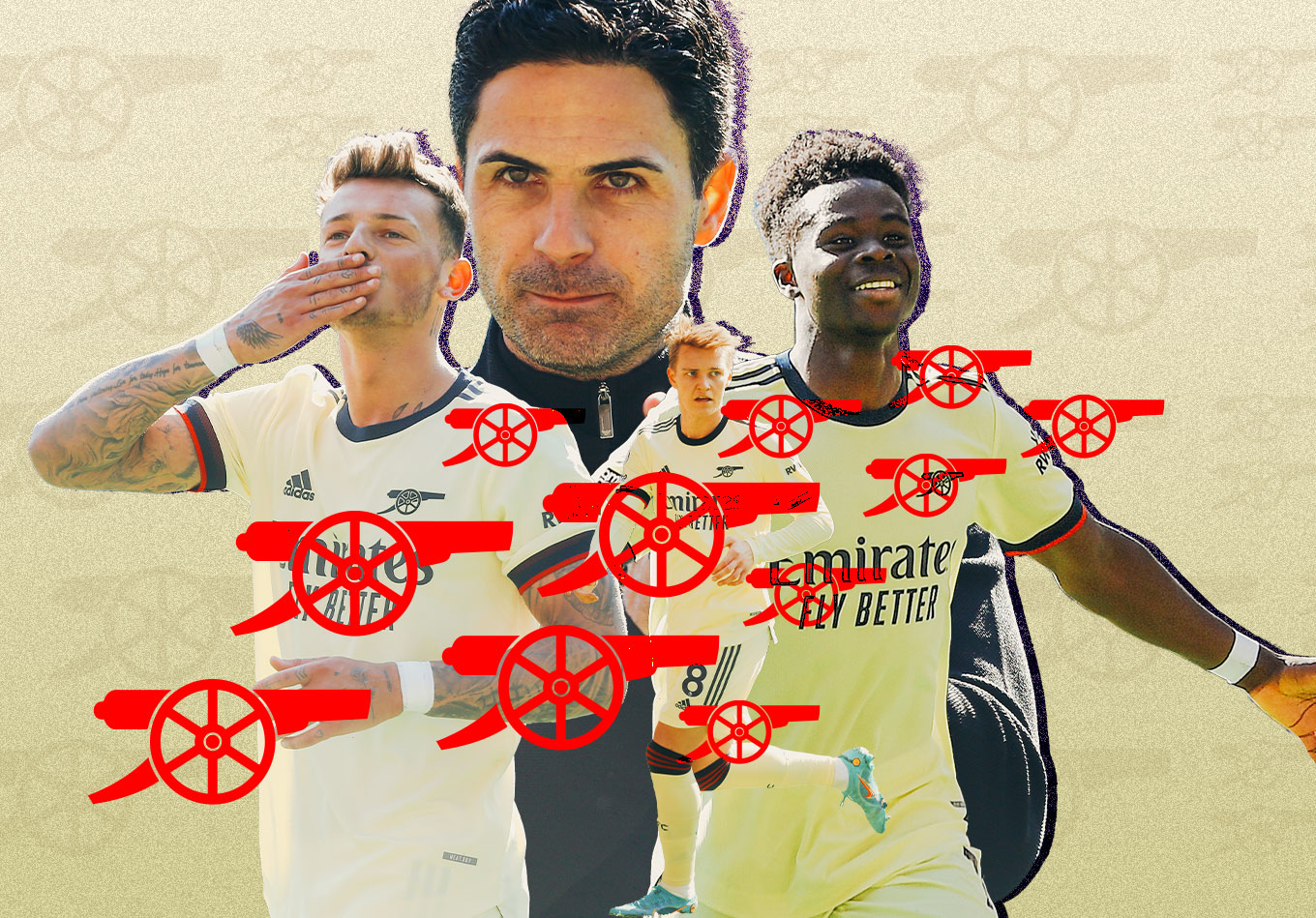 Project Arteta: How Arsenal Went From Bottom of the League to Top-Four Favourites

Although not always easy to spot, Mikel Arteta’s Arsenal project has been on a steady upward trajectory throughout his two years in charge.

At times their psychological vulnerability has given the impression of stagnation. At others, Arteta’s willingness to abandon his structure for a free-form approach (as he did for much of the second half of last season) has given the impression of a manager unsure of his endgame. But zoom out and he has always been laying the building blocks of his Guardiola-inspired football – and there is little doubt now that he’s onto something.

The story of his tenure goes like this. After initially implementing an overly rigid possession system straight out of the Guardiola playbook, which led to some restrictive football but an FA Cup win nonetheless, throughout 2020-21 Arteta had to loosen the reins a bit to accommodate more directness and individualism. Pandemic football had dried them out. This brought its own chaos, but after a very successful summer window Arteta was able to twiddle the dial back again for the 2021-22 campaign.

The upshot is that as Arsenal close in on the top four, their tactical identity is now heavily influenced by Guardiola but with an Arteta twist that was developed on the job: possession-centric and built on intricate positional coaching, but less aggressive in the press and with some emphasis on counter-attacking verticality.

Let’s start with that defensive foundation – a style that was established early but has only found consistency over the last few months.

Arsenal are theoretically a team that likes to press high up the pitch to win the ball in dangerous positions. Only Liverpool and Manchester City have applied more pressures in the final third than Arsenal (1,647) and the Gunners rank fourth for shot-ending high turnovers (40), behind the likely suspects Liverpool, Leeds United, and Southampton.

And yet surprisingly their PPDA is the 11th lowest (13.9) while Arsenal are fifth bottom for pressed sequences (358) – the number of sequences starting in the defensive third where the opposition has three or fewer passes and the sequence ends in their own half. And even that’s only just above Wolves, Newcastle United, Leicester and Norwich.

The explanation for this is that Arsenal pick their moments, rather than apply a Man City-style hard press – preferring to keep things in a compressed shape for long periods. That compact structure is one of the reasons why Arsenal’s players as a collective have been dribbled past (192) less often than any other team in the division.

This solid defensive wall, with well-timed but occasional pressing triggers, is captured in the fact Arsenal rank 11th for team presses (628) but first for average press duration (6.6 seconds) and third, behind Manchester City and Liverpool, for the average number of pressures per team press.

This is Arteta in a nutshell: patient but extremely calculated; conserving energy, but going all-in when the time comes. Thirteen clean sheets this season – their most in a league campaign since 2017-18 – and zero goals conceded from corners, is testament to the coaching.

When it comes to Arsenal’s build-up play, once again it is Guardiola-like but with important differences. Only Brighton and Manchester City score lower on ‘direct’ speed than Arsenal’s 1.23 metres per second progressed upfield. And Arteta’s side are fifth for build-up attacks (78), a passing sequence that contains 10 or more passes and either ends in a shot or touch in the box, reflecting a calculated possession style to their overall play.

However, unlike Guardiola – who believes in recycling the ball to restore the perfected balance of his team shape before attacking – Arteta is more open to taking advantage of attacking transitions, with his side registering more shot-ending high turnovers than City’s side. They’ve also scored five goals from counter-attacks, with only Manchester United, Tottenham and Leicester City managing more.

As discussed earlier, this tactical loosening of his mentor’s ideas came from the period in 2020-21 when Arteta went for a trial-and-error approach to solving his team’s poor form. It was here that Arteta really found his own voice, becoming more open to letting his players’ natural flair show even when it contradicts the immaculate positional structure he coaches in training.

Still, most of the time it is about slower build-up from the back these days, thanks largely to how Martin Ødegaard has come to the fore, linking with the ever-improving Thomas Partey and Bukayo Saka to create intricate passing triangles through the centre of the pitch. Arsenal’s ‘absolute width’ is the fourth lowest in the division at 24.6 metres, which is exceptionally narrow for a top team. The only sides below them – Newcastle, Brentford, and Burnley – are forced to be narrow because they are so direct and often dominated.

By bunching their key creative players together through the central column Arsenal have plenty of progressive passing options through the lines – and are close enough together for the sort of quick one-twos we have been seeing of late. It helps having Thomas Partey screening the defence and always looking for the vertical pass, plus Ben White has been hugely influential thanks to his calm and forward-thinking possession.

Tellingly, no side has created more chances in the central third of the attacking half than Arsenal’s 133 this season.  That tally contributes 46.7% of their total in the Premier League this season – a league-high proportion. Arteta’s wide, creative players often cut in on their favoured foot and Ødegaard has been a massive creative force as a number 10.

The Gunners’ chance creation preference through the middle is a big shift from last season, where they created the second-lowest proportion through the middle third of the attacking half (32.7%), ahead of only relegated Sheffield United (30.0%).

All of this has become more prominent over the last seven league games, a period of six wins and a defeat to Liverpool in which things have truly clicked for Arteta. Comparing this spell to the 22 league games that preceded it, Arsenal have improved their average for: 10+ open play pass sequences (from 12.2 to 14.7); pressed sequences (from 12.9 to 14.9); and high turnovers (from 4.7 to 5.7).

Psychological factors aside, the main tactical element that has changed here is swapping Pierre-Emerick Aubameyang for Alexandre Lacazette – a more hard-working striker operating as a false nine, leading to even greater focus on those incisive passes through the central column of the pitch. Unsurprisingly, Lacazette attempts significantly more open play passes (22.5 per 90) than Aubameyang (16.7 per 90).

The other noteworthy shift has been a more permanent implementation of a Guardiola-style 4-3-3 with two free eights – and one of those being Granit Xhaka of all people. His under-rated capacity to play crisp passes under pressure has made him the club’s new metronome while limiting the issues of his flat-footed defending. Being constantly on the move, rather than shuffling across at the base of midfield, means Xhaka is far less exposed.

Critics will highlight that Arsenal’s fixtures have been relatively straightforward recently, and certainly it is fair to say there are areas left for improvement. For one, only Wolves have won fewer points than Arsenal from losing positions (four), reflecting the emotional vulnerability still just under the surface, while the Gunners have conceded 45 shot-ending high turnovers, the fourth most in the Premier League. There is an occasional sloppiness in possession, especially at the back, that needs cutting out.

But these are all teething problems to be expected of the youngest team in the division (average age 24 years, 317 days), and likely to be improved in the next transfer window, an area Arteta has scarcely put a foot wrong so far. In this regard, and in the challenges that lie ahead as Arsenal hope to move from Champions League qualifiers to title contenders, Arteta has earned our patience and our trust.