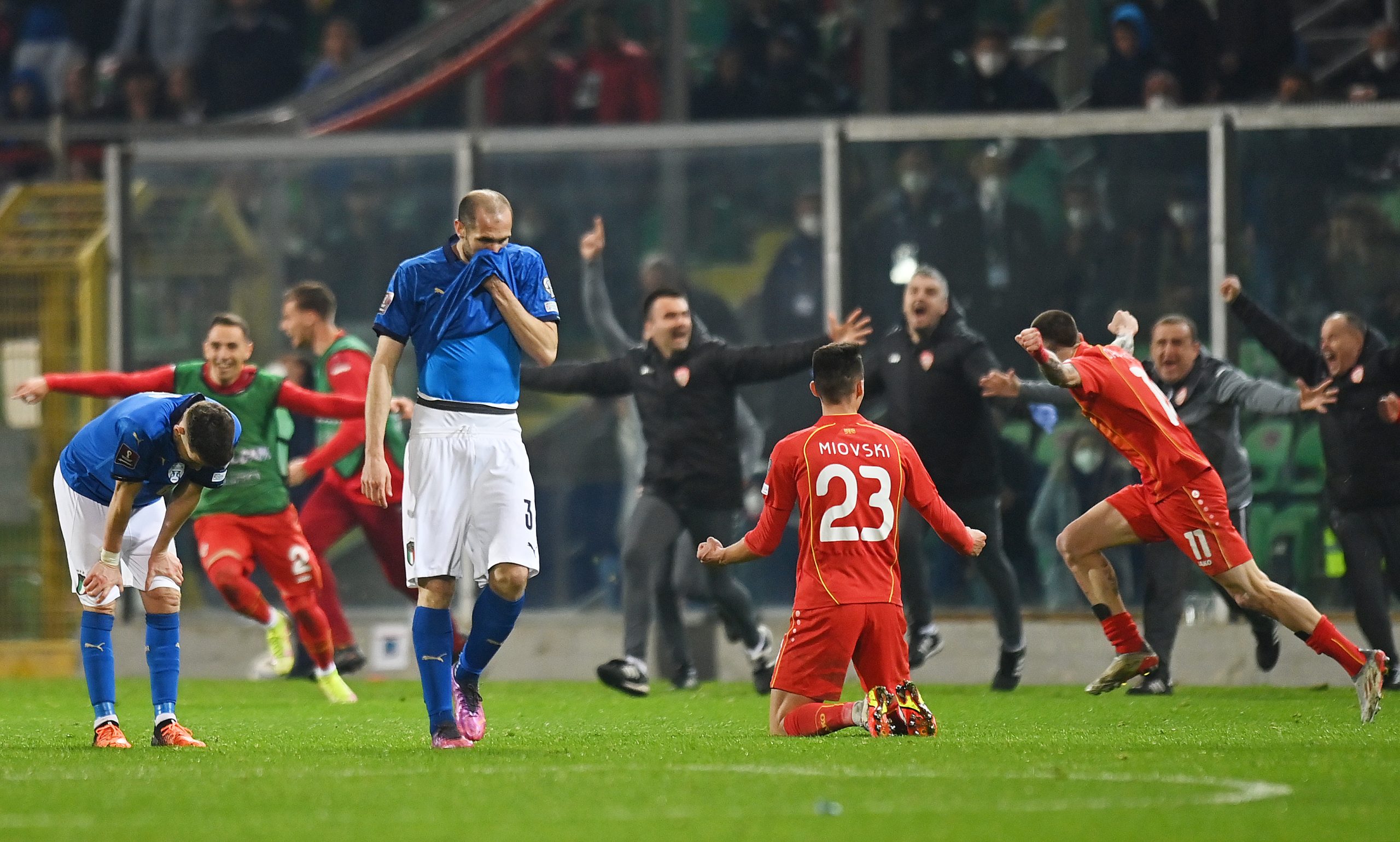 Disaster is never far behind triumph in Italian football.

Italy won the World Cup in 1982 and failed to qualify for the Euros in 1984, before going out in the first knock out round at Mexico 1986. Following World Cup victory in Germany in 2006, they went out two years later in the continental competition in the quarter-finals after winning just one game and then again in 2010 in South Africa after failing to win any games in a group that contained Paraguay, New Zealand and Slovakia.

Failure to qualify for Qatar 2022 therefore was always a possibility. A flaw in the Azzurri DNA that sees celebration turn to loss of focus and hunger. The first three games of the 2022 World Cup qualifiers saw Roberto Mancini’s team win all of them without conceding a single goal. But after the Euro 2020 final at Wembley, they drew four out of five allowing Switzerland to overtake them.

This morning though, Italians are waking up wondering if success last summer was actually the exception, an unexpected mirage, and that the real level of Italian football nowadays is reflected by two failed World Cup qualification campaigns that have terminated in play-off defeats to Sweden and North Macedonia.

One thing is certain, managing the Italian national team is not getting any easier. Since Marcello Lippi won the biggest prize in football in Berlin in 2006, the pool of Italian talent to choose from has been shrinking year after year in Serie A.

And while Lippi and his successors (Roberto Donadoni, Cesare Prandelli, Antonio Conte and Giampiero Ventura) had been accused of relying too much on age and experience, Mancini has at least been brave enough to include some youngsters in his squad. Considering how their 2022 World Cup aspirations ended, it won’t matter. The same critics will be questioning his judgement now that Italy won’t be present in Qatar in November.

Not only has the overall presence of Italian players in Serie A got smaller but among the top clubs, the phenomenon is even worse. Mancini has been forced to call up players from teams with less international experience than his predecessors, picking players from smaller sides like Sassuolo, Cagliari and Torino.

But what will really worry the Italian Federation is that the problem runs even deeper. Looking at Serie B and at the top youth tournament, Campionato Primavera 1, the number of Italian players has reduced there as well, leaving any future manager with a limited supply line of fresh talent.

Since their quarter-final win over Belgium in Euro 2020 and excluding the match against Lithuania where Italy won 5-0, the Azzurri have managed to score more than one goal in a game just once, in a Nations League game vs. Belgium. Their deficiencies in the final third were again evident on Thursday night. Italy managed 32 attempts but landed just five of those on target. North Macedonia, with an xG of just 0.17, booked their play-off final place against Portugal for next week. Roberto Mancini will be left scratching his head wondering how and if he will be able to do it all over again.