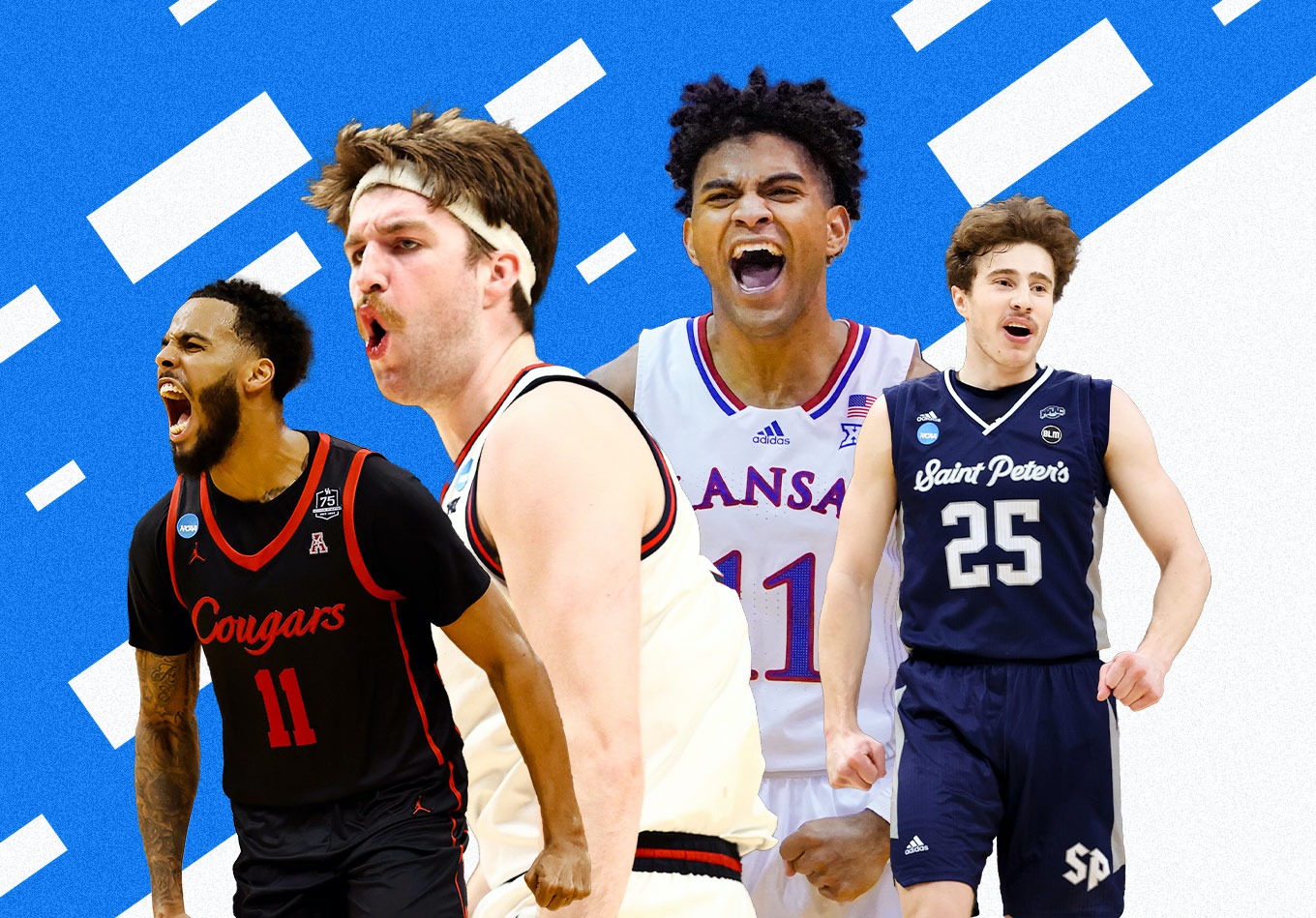 Now that was March Madness.

The First Four and first and second rounds of the 2022 NCAA Tournament featured six games that went to overtime (the record for a single tournament is seven), four double-digit seeds in the Sweet 16 and, to top it all off, a Cinderella run from the Saint Peter’s Peacocks, becoming the third No. 15 seed to reach the second weekend of the tournament. If you have them alive in your bracket, we’re going to have to ask that you show your work.

After previewing the first weekend last week (TRACR correctly predicted 34 of the 48 first and second round games), we shift to the Sweet 16 and Elite Eight, using TRACR (Team Rating Adjusted for Conference and Roster), our net efficiency metric that evaluates how well teams perform based on who they play.

I spoke with Evan Boyd, the model’s creator, to break down the top storylines in each region.

NOTE: This projection was done on Wednesday. For the most recent projection, check out our interactive bracket here.

Ethan: Despite a couple of upsets in the first round, the Sweet 16 in this region is all chalk. Can we expect Gonzaga and Duke to take care of business again on Thursday?

Evan: Despite the fact that the West holds the top four seeds, there have still been some close games that almost made it chaotic. Arkansas has won both of its games by five points or fewer. Gonzaga and Duke both had close games in the Round of 32. That’s why March is madness – even though it looks like chalk, we were a few missed shots away from it being far from chalk.

With that said, TRACR expects Gonzaga to beat Arkansas (82% chance) and be the favorites to reach the Final Four out of this region (53%). Texas Tech, however, is favored over the Blue Devils, but it is close (58%). TRACR expects the Red Raiders to end Coach K’s historic career after he got past Michigan State.

Ethan: Houston is currently TRACR’s No. 1 rated team. Are the Cougars now the favorites to come out of this region? And does Michigan, the only team in this region not to be ranked in TRACR’s top 10, have any chance?

Evan: Keep in mind that TRACR has loved Kelvin Sampson’s squad throughout the season. Entering the tournament, the Cougars had the third-best chance of winning this region at 14%, behind Arizona (22%) and Tennessee (22%). The reason why they had a lower percentage than the Wildcats and Volunteers was because they had a tougher second-round matchup with Illinois. Now that they are past the Illini and because Tennessee is out, the Cougars are the favorites, with about a 38% chance of winning the region.

Michigan does have a shot, but it is small. The Wolverines have a 35% chance to beat Villanova and a 10% chance to reach the Final Four.

Ethan: The Miami-Iowa State matchup guarantees a double-digit seed – and a storm of some sort – will reach the Elite Eight after the Hurricanes trounced Auburn and the Cyclones beat Wisconsin. What are the chances one of them makes it to New Orleans? And why is Kansas-Providence so lopsided?

Evan: The Miami-Iowa State matchup might be the closest game in the Sweet 16. TRACR favors the Cyclones but at only 52%. Hence, it’s pretty much a toss-up between these two teams. Both teams would be the underdog against the winner of Kansas and Providence, so their chances of reaching the Final Four are small – about 10-20%.

Kansas is the fourth-best team in the country, per TRACR. Providence is 32nd. The Friars have won many close games, going 11-2 in games decided by five points or less. TRACR, however would expect a really good team to beat those teams that the Friars played close by a lot more. In addition, Providence’s 27-point loss to Creighton before the tournament hurt its numbers. Kansas just beat the Bluejays in the second round.

The Jayhawks are the heavy favorites to win this region, with a 55% chance of winning. That’s the highest chance of making the Final Four among the 16 remaining schools.

Ethan: Baylor is out. Kentucky is gone. We have to talk about the Peacocks. What were the chances they made it this far? And do they have any hopes of winning one – or two – games this weekend?

Evan: Before the tournament began, TRACR had St. Peter’s with the highest chance of reaching the Sweet 16 among 15 and 16 seeds… but at just 5.1%. Then they went and beat Kentucky. What we are seeing is one of the craziest runs in tournament history. Now that the Peacocks have made it to the second weekend, they have about the same chance as making the Final Four as they did to reach the Sweet 16, at 4.8%. Entering the tournament, that number was at just 0.4%.

It seems unlikely that the Peacocks will go any farther. They have an 18% chance of beating Purdue – the Big Ten’s best remaining hope – the favorite to win the region. No 15-seed has ever reached the Elite Eight.