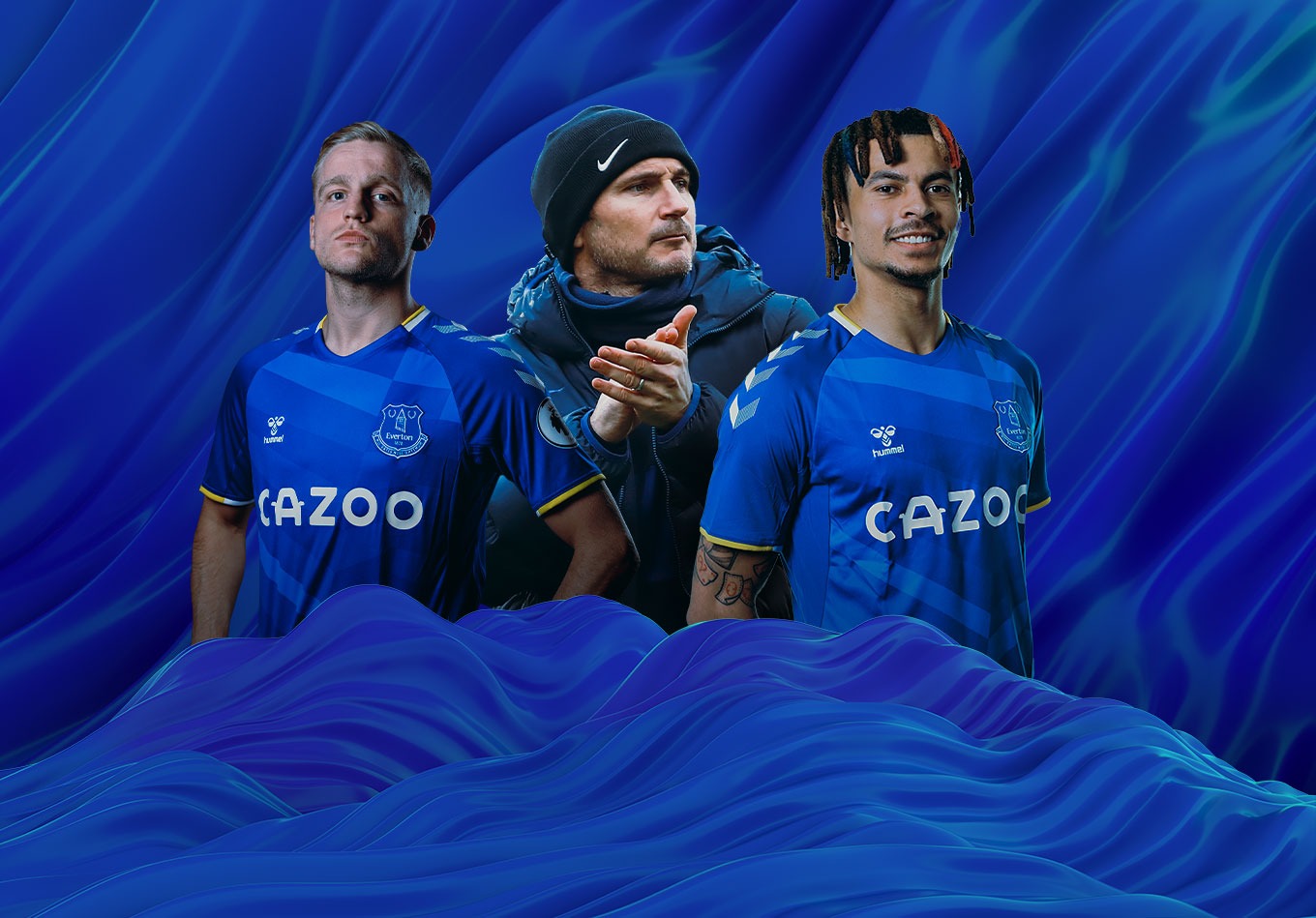 What Can Everton Expect from Lampard, Dele and Van de Beek?

Over the last half-decade of ups and downs, during which time the scattergun approach of owner Farhad Moshiri has made it difficult to understand what this club wants to be, two habits have emerged as defining features of the modern Everton. Lurching wildly from one tactical ideology to the other, and signing famous players whose careers are on a downward trend.

Moving from the ultra-defensive cautiousness of Rafael Benítez to the free-form attacking impetus of Frank Lampard, then promptly signing two midfielders who set the world alight in 2018, exactly follows the pattern. Any supporters worried by the trend, by Moshiri’s tendency to assume collecting famous people together will make a super club, may be anxious by the latest manifestation.

But there is reason for cautious optimism, because there is a slight twist on the old game: Lampard, Dele Alli, and Donny van de Beek are all still young, capable of change or rebirth in a way that Benitez and Carlo Ancelotti, James Rodríguez and Theo Walcott, were not. There is potential in all three, and as such, it is worth reminding ourselves of just how good Dele and Van de Beek were a few years ago.

Dele and Van de Beek are the most Lampardian of Lampard signings. Whether that is a good or a bad thing depends on your opinion of the manager – and your belief in whether he is capable of improving on his 18-month stint as Chelsea manager.

Lampard believes in a high defensive line, high and hard pressing, and a commitment to bold attacking football in which multiple bodies pile forward as Chelsea looked to play a possession-dominant game that often felt a little too slow. This is reflected in the statistics from his only full season in charge at Chelsea, when they ranked third for the number of 10+ pass sequences (642) but only eighth for direct attacks (59). In that year only Manchester City (14.9s) ranked lower than Chelsea (11.1s) for the average time in possession per sequence.

However, unlike the detailed on-the-ball scaffolding we see underpinning Pep Guardiola’s patient possession, where movement and passing choices are coached in as much microscopic detail as defensive shape, Lampard expected his players to improvise their attacks. It explains why attacks could slow right down, lacking the speed of passing that comes from set-plays being drilled into the long-term memory in training.

What characterised his Chelsea team more than anything was wildness. He gave them the freedom to roam about the final third in a way that directly corresponded to the style of Lampard the player at his brilliant and instinctive best.

This might have worked in Lampard’s playing days, but the modern Premier League is far more tactically sophisticated. Without ruthlessly demarcated positioning in possession Chelsea were not spread evenly across the pitch, which meant gaping holes left open for opposition counter-attacks. This issue was compounded by the similar disorganisation of Chelsea’s press: charging the ball down in ones and twos, often with a midfield line instinctively backtracking while the forwards move up, creating a decompressed shape through which opponents could easily attack.

As José Mourinho pointed out while on punditry duty following Chelsea’s 4-0 defeat to Manchester United on Lampard’s debut in 2019, a formation should be compressed at all times – whether on or off the ball. By contrast, Chelsea were always stretched and lopsided.

Van de Beek and Dele will be very excited to be part of a team that fits their own improvisational instincts, and unless Lampard has changed dramatically in his year out, they will be given all the freedom they crave.

It’s easy to forget what sort of player Dele used to be. In three seasons between 2015 and 2018, when he first burst on the scene at Spurs as a unique and extraordinary talent, Dele amassed 63 goal involvements in the Premier League alone. Only Harry Kane (94) produced more.

Since then, his record reads 26 goal involvements in three and a half seasons.

It is that end product, and its unexpectedness, that made Dele so special. He was never much of a creative force from deeper areas – most of his assists coming from deft touches inside the penalty area – and indeed would always go missing for long periods of matches, floating harmlessly high up the pitch before suddenly producing a clinical moment. To illustrate the point, even in the 2016-17 campaign, when he scored 18 goals and Spurs won 86 points, Dele was only the 11th highest passer in the Tottenham squad.

Instead, his main attribute was making runs ahead of Harry Kane and moving into the box to score – often with his head. Dele is an unusual presence as a second striker, far more likely to ghost ahead of the play than drop and become involved, as a statistical breakdown of his glory years shows.

Among all Premier League players between 2015 and 2018, Dele ranked 11th for total shots taken (237), second among midfielders for touches in the opposition box (421), eighth for chances created in open play (168), ninth for dribbles attempted (384), and 17th for touches in the opposition box. Compared to his scores between 2018 and present, it is clear just how far he has fallen as defence-first, counter-attacking coaches like José Mourinho and Nuno Espírito Santo failed to find a place for him:

What stands out most from the above is that Dele is now passing more often, reflecting how counter-attacking managers expected him to play in deeper areas and with fewer risks, as the below graphic shows:

Aside from directly leading to fewer goal involvements, Dele’s repositioning also prevents him from carrying the ball into the final third, something he used to be superb at. Only Kevin De Bruyne (13) assisted more goals following a carry than Dele’s 10 between 2015 and 2018:

If Lampard can restore Dele’s confidence – and as an arm-around-the-shoulder manager with an instinctive love of goalscoring midfielders, he well might – then Everton may see the benefit of a second striker making runs beyond Dominic Calvert-Lewin.

The flip side, of course, is that Dele’s maverick positioning could exacerbate the problems of Lampard’s structurally weak system, and while Dele is a hard-working and high-pressing defender (between 2015 and 2018 he ranked fifth in the Premier League for possessions won in the final third) he craves the sort of instruction Mauricio Pochettino could provide.

Premier League fans are less likely to remember what made Van de Beek so special, but he was no less exciting than Dele in his peak years at Ajax – and in the 2018-19 campaign in particular, when the Dutch side made it to the Champions League semi-final.

Unlike Dele, Van de Beek is at his best in deeper areas, playing most often on the right of a midfield three but equally adept as a number ten. His defining characteristics are his spatial awareness, movement, and eye for a line-splitting vertical pass, all of which would drive Ajax quickly into the final third from a seemingly harmless position.

Van de Beek is an extremely creative player. Between 2017 and 2019 only Hakim Ziyech and Dušan Tadić were involved in more goals for Ajax in all competitions than Donny van de Beek (30 goals and 20 assists), and Everton supporters can look forward to him bursting into the box from deep. Even as a midfielder, he had the 18th most touches of any player in the opposition penalty area in the 2018-19 Champions League.

Like Dele, it is hard to know whether such a seemingly-instinctive footballer – van de Beek’s best touches, passes, and runs are wholly unexpected – will actually benefit from a more hands-off approach given that his best work was under the diligent Erik Ten Hag. Similarly, will he inject much-needed energy to speed up Lampard’s attacks, or be slowed down – and thus nullified – by the speed of those around him?

Will Dele and VDB Work in a Lampard Midfield?

Assuming Dele is to play as a second striker in a 4-2-3-1, that would leave Van de Beek as the man expected to set the tempo that keeps Everton on the front foot. But Van de Beek can look lost in a midfield two, while Dele most likely requires a serious pressing structure to accommodate his unusual positioning.

Hopefully Lampard has adapted, then. If Everton are allowed to play in an improvised shape in possession, then there will be an enormous vulnerability through the middle, but if Lampard benefits from the change of coaching team – if Paul Clement brings with him greater organisation – then Dele and Van de Beek will be freed to reproduce their best form.

That is the ultimate question. Does a Lampard team full of his favourite type of player – creative, instinctive, joyful – create the best version of his tactical identity, or does it double down on the essential Lampardian flaws?