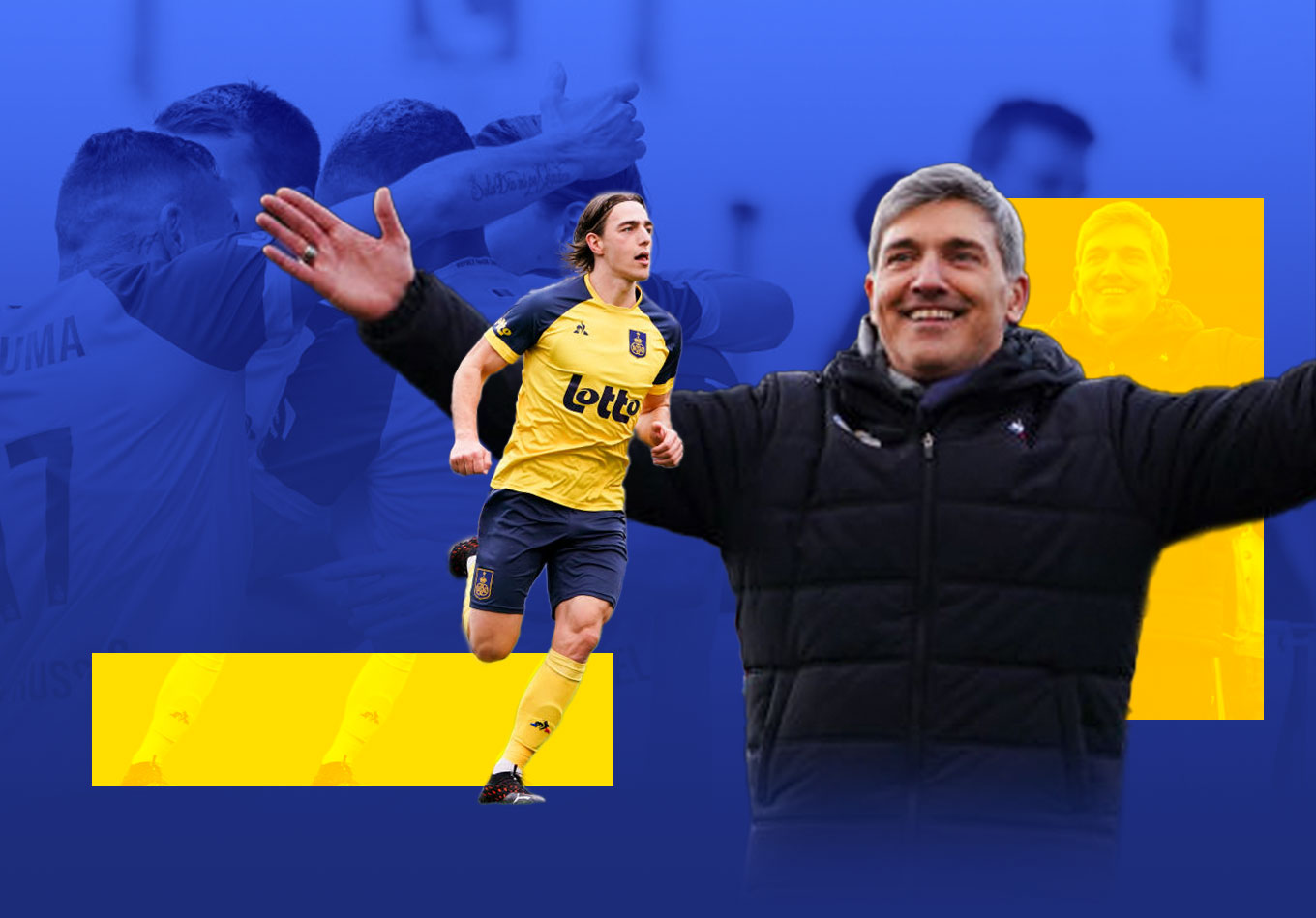 In the outskirts of the south of Brussels, an underdog story like no other is taking place. After an almost half-century exile from the Belgian First Division A, Royale Union Saint-Gilloise sit top of the table in their very first season back in the top-flight for 48 years. However, this is not a typical tale of the rise of a minnow, this is the renaissance of a fallen giant.

With 11 league titles to their name, Union Saint-Gilloise are the third most successful club in Belgium. Les Unionistes dominated Belgian football at the turn of the 20th century, winning six straight First Division titles between 1903 and 1910. A constant presence in the top flight, Union failed to finish lower than fourth place in the top tier between 1902 and 1926. Winning three consecutive titles from 1932 to 1935, Saint-Gilloise embarked on a 60-game unbeaten run – a record that still stands to this day as the longest win streak in the history of Belgian football. However, few would have predicted that the triumph in 1935 would have been Union’s last.

Les Unionistes were relegated for the very first time in 1963 and began to yo-yo between the top two divisions. Union played what would be their last game in the First Division a decade later, prompting a nearly 50-year absence from the top tier and a steep descent into the lower leagues of Belgian football. In 1980, the club plummeted to the depths of the Belgian Promotion Division – the fourth tier. It was a devastating fall from grace for a club which had reached the semi-finals of the Inter-Cities Fairs Cup in 1960.

In 2018 Union were purchased by Tony Bloom, the owner of Brighton & Hove Albion, and his business partner Alex Muzio. The pair had set out to purchase a club on the continent but had strict parameters: cheap, potential for growth, easily accessible from London and an availability to buy. Bloom and Muzio had a burning desire to win, ruling out the heavyweight leagues of France, Germany, Italy and Spain. The duo had debated purchasing a Dutch club but were discouraged by its association with hooliganism. With that, the pair stumbled upon Union Saint-Gilloise.

German owner Jurgen Baatzsch was looking to sell the club, and it met the brief of what Bloom and Muzio had been searching for. The pair purchased Union in the summer of 2018, with Bloom taking a back seat and Muzio overseeing the day-to-day running of the club. When Muzio arrived in Brussels, he could scarcely believe the way in which Les Unionistes operated. After narrowly avoiding relegation to the third tier in the season prior to the new ownership, Saint-Gilloise possessed facilities reported to be similar to that of a National League (fifth tier) side in England.

With no showers, toilets or changing rooms at the club’s training ground, players would travel to the Stade Joseph Marien, get changed, drive to the training pitch and then travel back to the stadium after training to shower. The club was in dire need of restoration. Muzio located suitable training facilities in Lier, a small town 30 miles north of Brussels and with Bloom, began to inject minimal-but-essential funds into the neglected sleeping giant.

Muzio appointed Slovenian Luka Elsner as manager, and in their first season under the new regime, Union finished runners-up in the Belgian First Division B. Les Unionistes also ascended on an implausible run to the semi-finals of the Belgian Cup, defeating Genk and city rivals Anderlecht, before being knocked out by eventual winners Mechelen. The stunning season at the Stade Joseph Marien harboured hopes of a return to the First Division A. However, with pre-season in full flight for the 2019-20 campaign, Elsner handed in his resignation and departed for Ligue 1 outfit Amiens. Muzio hired former Leeds United manager Thomas Christiansen, but the Dane was only able to guide Union to a fourth-place finish in a season which was prolonged due to the Covid-19 pandemic.

In the summer of 2020, Les Unionistes appointed Felice Mazzu as their new head coach. In his own words, Mazzu did not have much of a career as a player – describing himself as a ‘joker’. After becoming manager of his local-club Charleroi in 2013, Mazzu guided them to the Championship play-offs, winning Belgian Coach of the Year in 2017. However, after an unsuccessful stint with champions Genk in 2019, the Belgian found himself out of work. It was a shrewd appointment from Muzio and Northern Irish sporting director Chris O’Loughlin.

Arriving with a point to prove, Mazzu guided Union back to the Belgian First Division A at the first time of asking – winning the second division by a staggering 18 points. After losing just two games in the entire season, Saint-Gilloise achieved promotion to the top-flight with five games to spare. Alongside a positive goal difference of 45, Saint-Gilloise romped the league as top-scorers and with the most impenetrable defence. It was a tremendous achievement considering Les Unionistes did not possess the largest budget in the second division. Union’s side centred entirely around free transfers and loans. In fact, the club did not spend a penny in transfer fees in their promotion campaign last season.

Their meticulous transfer policy is down to the astute work of sporting director O’Loughlin. The Northern Irishman’s CV includes coaching roles with Charlton Athletic, Melbourne Victory in Australia and Orlando Pirates in South Africa – the country in which he spent his youth. O’Loughlin has adopted a transfer policy at Union that is the envy of all in Belgium. His primary focus is two-fold: gifted players who are surplus to requirements at big clubs and talents from lower leagues across Europe.

Talisman Deniz Undav, who recently sealed a deadline day move to Brighton in the transfer window before being loaned back to the club, was picked up from German third-tier side SV Meppen. It proved to be a shrewd addition from Union, with Undav netting 17 goals in the promotion campaign last term. Yet the German was not even Les Unionistes’ top scorer. That accomplishment went to 23-year-old Dante Vanzeir. Acquired on a free transfer from Mazzu’s former side Genk, the Belgian scored 19 goals across the season, finishing as the division’s joint-top scorer. A hard-working and industrious forward, Vanzeir made his Belgium national team debut in November, sparking a viral video of his Union teammates erupting in jubilation as he was called up by manager Roberto Martinez.

The English connection at the Stade Joseph Marien does not stop at Bloom. After winning Portsmouth’s Player of the Season in 2020, English centre back Christian Burgess made the switch to Union after his contract had expired on the South Coast and has starred in the heart of their defence ever since.

After a remarkable promotion campaign, Muzio stated he did not believe major changes were required within the Union squad. The club once again failed to spend a penny in the summer transfer window, undoubtedly paying dividends. But few could have predicted the unimaginable success that has descended upon the Stade Joseph Marien. Top of the table by 10 points, Union are on course to win their 12th Belgian First Division A title, 87 years after their last.

The season started in emphatic fashion, with Mazzu’s side defeating cross-town rivals Anderlecht 3-1 at the Lotto Park. Adopting a Leicester-esque approach of ‘we are taking one game at a time’, Mazzu has hushed all speculation of a title triumph throughout the season. The Belgian’s 3-5-2 system has rocked the rest of the First Division A. Boasting an energetic and fearless side, Union have shown little respect to the rest of the league, steamrolling all of those who have come before them.

So far this season, they’ve been the second most direct side in the Belgian top-flight, with only struggling KV Oostende (2.25 metres/second) progressing up field in open play sequences quicker on average than the league leaders (2.05 m/s), with 35% of the distance they have covered in their open play sequences this season up field.

In contrast, the chasing pack of Antwerp (29%), Club Brugge (27%), Anderlecht (22%) and Charleroi (28%) are much less direct in style, proving Union Saint-Gilloise to be an outlier in style at the top of the league. Interestingly both metrics are very similar to those of Leicester City in their 2015-16 English Premier League title win, when they had a league-high 38% directness and advanced up field a league-high 1.98 m/s.

Mazzu asks his side to win the ball as high up the pitch as possible, and spring counter-attacks upon the opposition while they are at their most vulnerable. This is evidenced through Union having a league-high 21% of their high turnovers end in a shot (43/205), with only third-place Club Brugge (44) having had more.

Saint-Gilloise like to attack from wide, with the dynamic duo of Vanzeir and Undav making exploiting runs in behind the opposition’s full backs at any given opportunity. Only four teams have had a lower percentage (23.1%) of their attacking half touches in the middle third of the pitch, with only three sides netting more goals in the division from crosses (10) than Union.

Sticking on the strike partnership of Vanzeir and Undav, the pair have continued their marvellous strike rates in front of goal in the top tier. Undav is the division’s top scorer with 20 goals and nine assists in 26 appearances. Vanzeir, meanwhile, is not far behind with 13 goals and 10 assists in 26 matches. Together the duo make up 56% of their side’s goals this term.

Undav has been a major threat across this season, so it came as no surprise when Brighton used their close connection to Union and snap him up permanently in January. The 25-year-old is a prolific shooter, with an average of 3.9 non-penalty shots per 90 in the Belgian top-flight this season. To put this into perspective, only seven players within the top five European leagues to have played 1,000 or more minutes this season have a higher average, including Robert Lewandowski (5.0), Mohamed Salah (4.0), Erling Haaland (4.3) and Kylian Mbappé (4.2). However, of these seven, only Lewandowski (0.23) has a higher non-penalty xG per shot average from non-penalty shots than Undav (0.18), showing it’s very much not a case of quantity over quality.

Union’s 2-0 victory over second-placed Royal Antwerp in their last outing extended the gap at the top to 10 points. It also marked a 10-game unbeaten streak for the Brussels-based side, in a tricky run that also consisted of games against fellow title-chasers Anderlecht and Club Brugge.

With talk of the title returning to the Stade Joseph Marien in Union’s first campaign back in the top-flight in 48 years, points in their remaining eight matches are vital. The top four sides’ points are then halved as they contest the Championship play-offs, with each club playing each other twice. In what would be without doubt the story of the season across Europe, Belgium’s sleeping giant are a force once more.