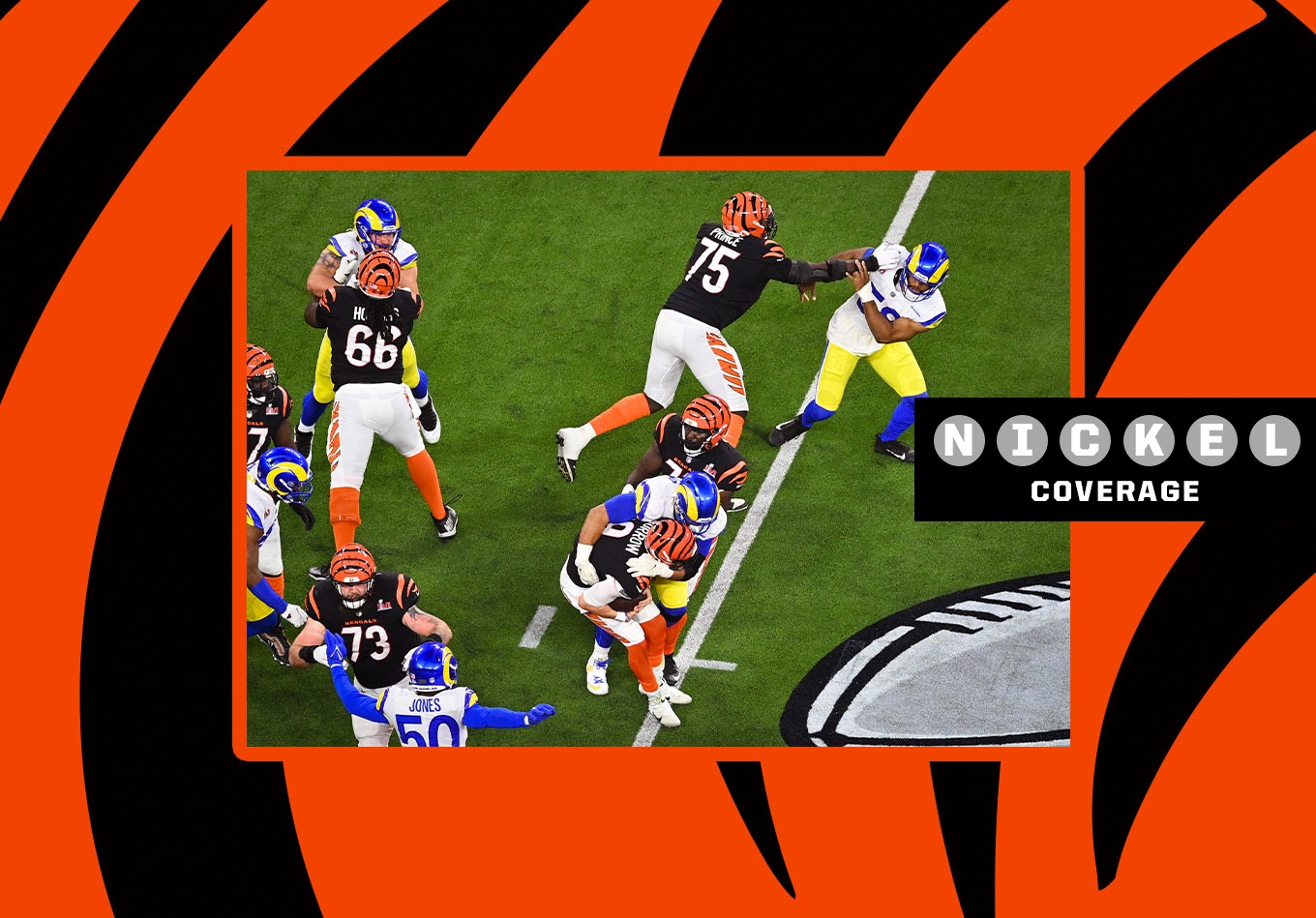 The Cincinnati Bengals were the team nobody saw coming.

Their progression to the Super Bowl was a true tale of the unexpected and, while there were several reasons for the lack of support for a Bengals title push last year, the standout factor was one that eventually proved their downfall.

Not many are scrutinizing the Bengals’ decision to pick wide receiver Ja’Marr Chase fifth overall after his NFL Offensive Rookie of the Year campaign and it is unlikely Penei Sewell, or Rashawn Slater would have prevented the Los Angeles Rams defensive front from taking over late in the second half of Super Bowl LVI.

But the Bengals’ breakdown in protection when it mattered most was the product of successive offseasons in which improper attention was paid to patching the holes up front.

Indeed, the mismatch most expected between the Rams defensive line and those trying to protect Joe Burrow came to fruition and, though the Bengals should be proud of their achievements in 2021, the numbers tell the story of a team whose offseason focus must be on the position group that ultimately prevented them from completing the fairytale.

The Bengals did an impressive job of keeping Aaron Donald in check until they absolutely had to, with the 23 pressures Cincinnati allowed at SoFi Stadium indicative of the sub-par pass protection Burrow spent the entire season overcoming.

Cincinnati ranked 25th in pass protection win percentage during the regular season, with their struggles stretching into a postseason in which Burrow was pressured at an historic rate. Since the 2006 season when Stats Perform began collecting such data, no team has given up more pressures in a single postseason than the 74 the Bengals surrendered during these playoffs.

Despite playing only 26 regular-season games in that span, no quarterback has been sacked more times than Burrow (83) since he entered the NFL in 2020.

The Bengals have made life extremely difficult on their franchise quarterback through their lack of proper investment in the trenches, which has also had a negative impact on the running game.

Indeed, the Bengals finished the regular season 27th in run block win rate, with Joe Mixon’s advanced numbers reflective of a line struggling to open clear lanes for him to hit.

Mixon ended the year putting up only 2.29 yards before contact per rush attempt (including the playoffs), below the league average of 2.38. He faced a situation in which the defense had at least one more player in the box than the Bengals did in the offensive box on 41.2% of his rush attempts. The average was 46.2.

In other words, teams weren’t loading up to slow down Mixon and managed to do so anyway, and when Cincinnati tried to run the ball with a first Lombardi Trophy in franchise history on the line, Samaje Perine was stuffed for no gain on third-and-1 on the Bengals’ final drive as it attempted to at least force overtime.

Left guard Quinton Spain was the only Bengals offensive lineman to record an above average pass block or run block win rate, yet he was the lineman Donald blew by for his game-winning pressure of Burrow.

Both Spain and starting left tackle Riley Reiff are set to hit free agency and, while the Bengals have close to $49 million in cap space, it is unclear how willing they will be to use it on a pair of linemen in their 30s.

However, after seeing the 2020 first overall pick suffer a severe knee injury in part due to their failure to protect him in his rookie season and the same issue doom their hopes of completing a Cinderella playoff run with the Lombardi Trophy in hand, it is clear they must prioritize giving Burrow time in the pocket that has rarely been a feature of his career to this point.

A Super Bowl between the Rams and Bengals demonstrated that in 2022 there’s no uniform approach to building a successful team. Yet, to climb the mountain, having solidity in the trenches is almost always a must.

The Bengals have constructed a roster capable of getting back to the big game, but to achieve that goal and avoid Burrow enduring a Dan Marino-esque career, they now finally need to address the area that has been neglected for far too long.