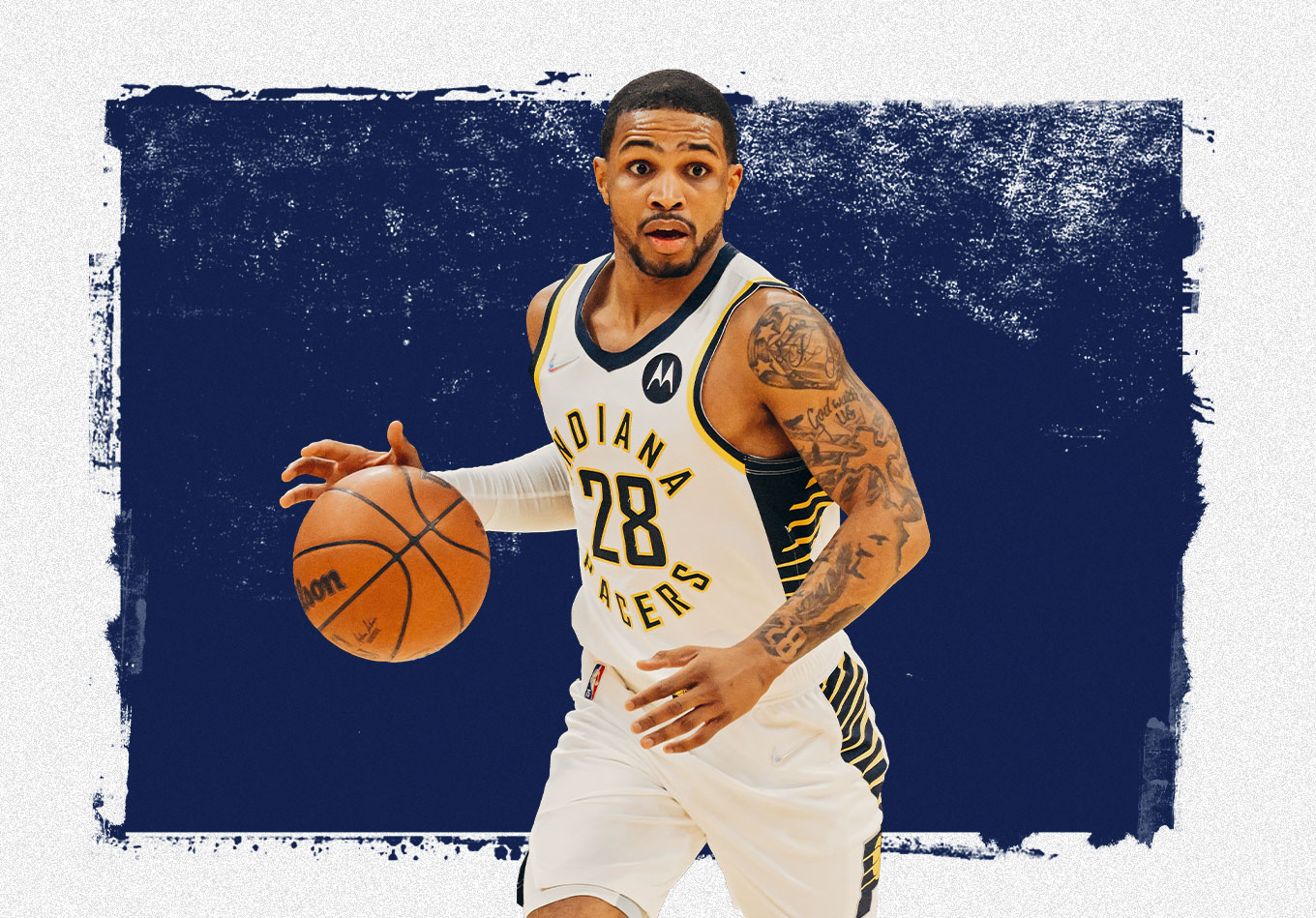 Answering the Call(Up): How Keifer Sykes Has Made the Most of His Omicron Opportunity

On Dec. 27, the NBA broke the record for players to appear in a season.

This is particularly striking considering the regular season was only approaching 40% completion at the time. This uptick in player appearances was out of necessity as 247 players entered the league’s health and safety protocols throughout the month of December.

The league, to its credit, was quick on its feet and, in collaboration with the NBPA, settled on some adjustments to roster rules to avoid game postponements and enable teams to temporarily replace COVID-inactive players.

This has resulted in more than 100 G League call-ups (another record) in the early season, as well as the return of some familiar vets such as Lance Stephenson, Isaiah Thomas, Greg Monroe and Joe Johnson.

But breaking into the NBA is REALLY hard. Especially for guards. In the words of former Eastern Washington standout turned basketball agent Alvin Snow: “Every human on Earth is a 6-foot-2 guard.”

The NBA’s current state of hardship exemption and 10-day opportunities (many of which lead to a chance at immediate significant minutes) has cracked the door open for many guards who otherwise would’ve faced seemingly insurmountable odds of breaking into the league.

A mere seven months prior to making his NBA debut, Hassani Gravett was duking it out against KK Rabotnički in the Macedonian Superleague. Keifer Sykes was Down Under, lacing them up for the Southeast Melbourne Phoenix. Kyle Guy was playing his final game with the Sacramento Kings after a month-long stretch of shooting a mere 25% from the field.

Few, if any, could have foreseen these three guards getting significant NBA minutes, let alone contributing legitimate value, before the turn of the calendar year. But here we are. While “The Bubble” will certainly leave the most searing image in our brains from the NBA COVID-era, the fallout of the winter 2021-22 Omicron variant wave may, in fact, have the most tangible impact on the league moving forward.

Now that the Omicron wave has (hopefully) come and gone and things seem to be stabilizing a bit, let’s take a step back and look at who stood out in the midst of chaos.

In a two-part series, we’ll dive into these three guards who seized their moments and may end up sticking as NBA rotation players.

As a small guard playing in a big city, Sykes was consistently underappreciated and underranked. Following his senior year at Marshall Metro in Chicago, Sykes wasn’t even considered a top-25 senior in Illinois.

“I can’t wait to get the list of all the players they had ranked ahead of me. Not a lot of guys on that list made it to the NBA,” Sykes told The Analyst with a laugh.

We found the list. Turns out he was right.

A few names have had cups of coffee in NBA preseasons, Summer Leagues, and in the G League (Sam Thompson, Wayne Blackshear, Ryan Boatwright). But only five actually made the NBA: Anthony Davis, Frank Kaminsky, Chasson Randle, Abdel Nader and Sykes.

But how did he do it? How did a sub-6-foot, under-recruited guard scratch and claw his way to the NBA? It was a circuitous path, to say the least.

Let’s begin with Green Bay. How did Sykes end up there? Chrys Cornelius was an assistant coach at Eastern Illinois and was heavily involved in the recruitment of Sykes’ elder high school teammate, close friend and current Chicago Bull Alfonzo McKinnie. McKinnie tipped Cornelius off that Sykes’ talent was flying under the radar and the staff started heavily recruiting him.

When Cornelius made the jump to Green Bay in 2010, the recruitment stayed consistent and genuine. Green Bay staffers consistently attended Marshall’s open gyms, games, and practices. That loyalty paid off and Sykes committed to Green Bay after his junior year. While some other suitors came in late, Sykes was more annoyed than flattered and honored his commitment to Green Bay.

The Green Bay program had two senior guards graduating. Herein laid a chance for Sykes to seize an opportunity and make an early impact.

“The best way to develop is to play,” Sykes said.

His combination of groundedness, loyalty and self-awareness landed him in what turned out to be a perfect situation to thrive as a college basketball player. He started all four years and finished as one of only two players in program history to eclipse 2,000 career points (the other being current Virginia head coach Tony Bennett). Sykes was twice named the Horizon League Player of the Year.

Sykes’ amateur basketball career bore a close resemblance to that of fellow undersized Illinois native turned mid-major standout Fred VanVleet. While their playing styles are starkly different with Sykes holding the upper hand athletically and VanVleet being a far better shooter, there are some striking parallels.

While VanVleet immediately found a spot in the NBA as an undrafted free agent, Sykes did not.

Sykes’ successful collegiate career alone would have been a great story, but as it turns out, his basketball journey was only beginning. He went undrafted in the 2015 NBA Draft and has played anywhere and everywhere in the six-plus years since.

All of that bouncing around without breaking through to the NBA for more than half a decade could’ve been met with cynicism, but Sykes took each and every stop along the way as an opportunity to learn and grow.

“Over the last two years I’ve played on probably close to 10 teams. After I left Milan, my next deal was short-term with Türk Telekom for the final eight of Champions League when the season resumed from COVID,” Sykes said. “When I played in Greece, it was only for a month…So when I was on those teams I was telling myself, ‘Hey…this is equivalent to what a 10-day would look like.’

“You’ve got to come in, show your value, and be able to adjust and mesh with the team in a short amount of time. My goal has always been to make it to the NBA…and playing in all these places definitely prepared me for that.”

Sykes’ decision to sign in the Australian NBL for the 2020-21 season was a wise one. Basketball is on the up-and-up Down Under with many recent NBL to NBA success stories like lottery picks like LaMelo Ball and Josh Giddey, but also fellow overseas journeyman Jae’Sean Tate (who shares the same agency).

Sykes was one of the best guards in the NBL throughout his sole season in Australia. He was one of only five players to average at least 5.0 assists per game while finishing in the top 20 in both points per game and free throw percentage. He looked NBA ready.

Sykes followed up his success in Australia and a brief stint in Greece with a significant uptick in public notoriety after his million-dollar, game-winning shot in The Basketball Tournament.

It was announced shortly thereafter that Sykes had signed with the Pacers.

A dream come true? A fairytale ending? Not quite yet. The deal was an Exhibit-10 contract and Sykes was subsequently waived, then retained by Fort Wayne Mad Ants (the Pacers’ G League affiliate).

The G League is a grind, but this was all part of the plan. Sykes was ready to bet on himself. He found comfort in being able to lean on his longtime friend and former teammate McKinnie, who had himself followed an unconventional path from being undrafted out of Green Bay in the 2015 NBA Draft to eventually earning NBA opportunities.

McKinnie had tasted NBA success, but now found himself, again, in the same situation as Sykes with an opportunity in the G League. The two would constantly check in on each other, monitor each other’s performances, and challenge one another to push the limits and become the best versions of themselves.

The first month-and-a-half of Sykes’ seventh professional basketball season was spent in the G League, where he quickly established himself as one of the best guards in the league. His poise, tenacity and leadership built up trust and equity with his teammates.

Sykes and two-way forward Terry Taylor formed quite the tandem together in Fort Wayne and showed that they both may warrant serious cracks at the NBA.

The Omicron wave coincided with the G League Showcase in Las Vegas – a platform for players to show to onlooking NBA executives why they deserve a call-up. The event took on even more importance this year with wild day-to-day variability in roster availability throughout the NBA as clusters of players were coming down with Omicron.

What did Sykes do with this opportunity? Knocked it out of the park with 22 points and 13 assists.

The Mad Ants dropped 155 points – the highest team total in a G League game this season. With a forthcoming holiday lull in the G League schedule, all Sykes could do was keep training and wait by the phone for a call-up.

“When I was training at home after the Vegas Showcase, I was seeing guys I was literally just playing a day or two ago in NBA Christmas Day games,” Sykes said. “So I trained like I was playing in Staples Center, Gainbridge Arena, or Paycom Center. These were the things that I was projecting onto myself.”

That projection soon became a reality when the Pacers signed Sykes to a two-year contract on Dec. 27.

“Now it’s real life,” he added. “I knew this moment would come.”

Sykes’ swift ascent was no surprise to Pacers brass who took note of his impact early on.

Sykes’ heart, pestering defense and grittiness has led to him becoming an immediate contributor at the NBA level.

Everywhere he’s played, he’s won. And while the minutes may wax and wane, Sykes takes it upon himself to add value to the Pacers on a day-to-day basis.

The Pacers have clearly noticed, ultimately opting to guarantee Sykes’ contract for the rest of the season on Jan. 7.

“My mind always was in the NBA. Being there now isn’t surreal because my path, while untraditional, has gotten me ready,” he said.

Now that he’s made the NBA, what does the future hold for Sykes?

While the trajectory of Indiana remains a bit unclear ahead of next week’s trade deadline, one thing is quite clear to their 28-year-old rookie who dons his age on his chest.