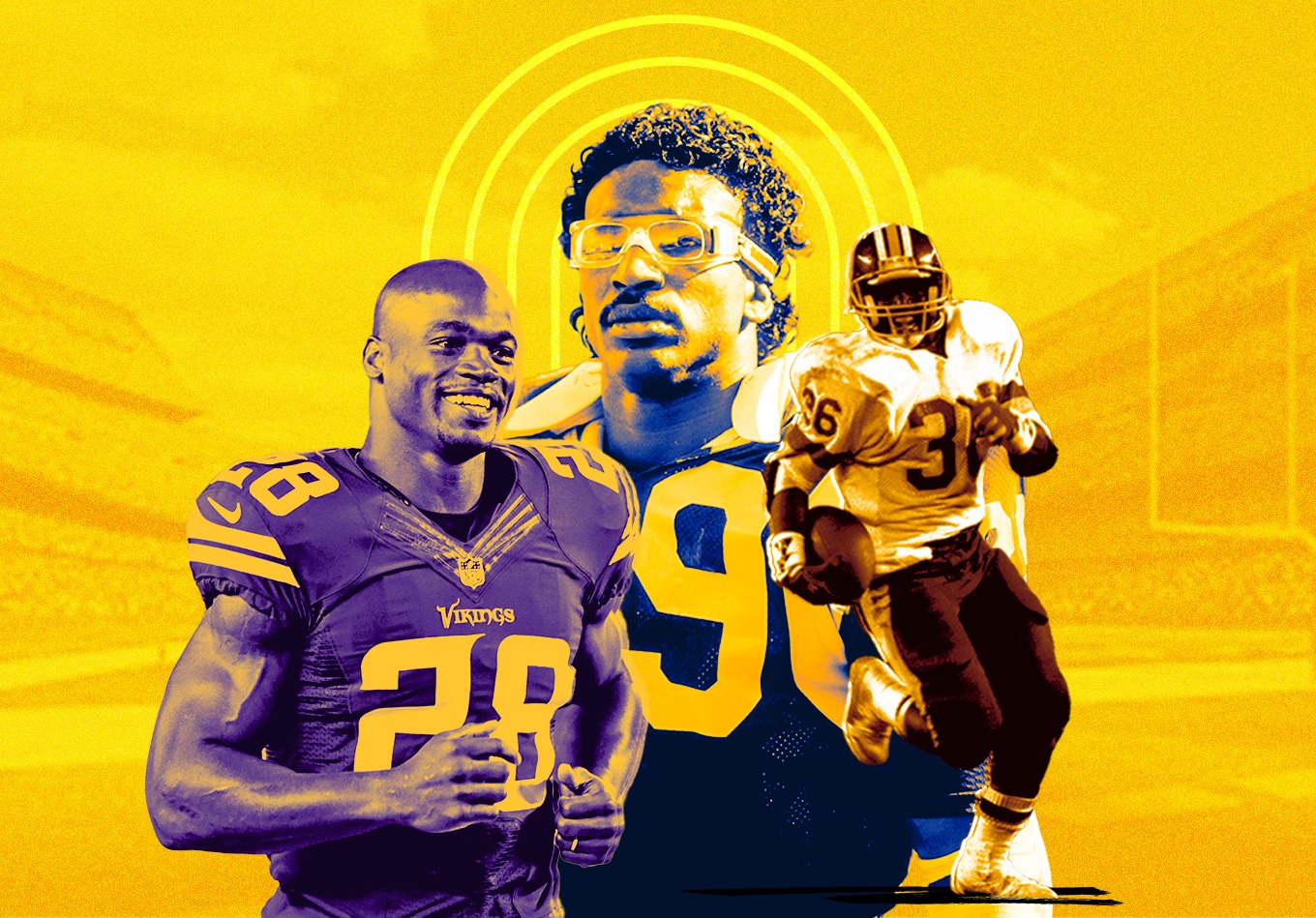 Ground and Pound: The Most Single-Game Rushing Yards in NFL History

And amazing catches might steal the time in the highlight reels. But every true football fan knows that when the weather gets cold or windy – it’s the running game that comes to the fore.

Here, we’ve looked back at some of the most dominant performances on the ground in the history of the NFL. From those players who stood out in the postseason to teams who have made their opponents suffer, we’ve got them all as we look at the single-game rushing records.

Most Rushing Yards in a Game

With just 43 rushing yards through the first two quarters and having seen his Minnesota Vikings team’s missed field goal on the final play of the half returned by San Diego’s Antonio Cromartie for a 109-yard touchdown to give the Chargers a 14-7 lead, Adrian Peterson could not have been happy in the locker room.

And rather than replicate that performance (which would have been enough to better his season average of 83 yards per game), the rookie running back put his team on his back. He took his second carry of the second half and galloped for a 64-yard touchdown to start a run at history – history that nearly didn’t happen.

Only the quick thinking of a PR director alerting the coaching staff in the booth that Peterson was closing in on the single-game record for individual rushing yards led to his return for the Vikings’ final possession.

In the end, a simple 3-yard burst up the middle was enough for Peterson to claim the record by a single yard before he was immediately taken to the sideline as the Vikings took the knee to claim victory. So, the elusive 300-yard mark is still up for grabs nearly 15 years later, although Peterson believes a 400 game would have been in his sight if it wasn’t for the disappointing first half showing.

Never have words been stuffed back into the mouths of someone with more force and venom than by Jamal Lewis. Heading into the Week 2 clash in the 2003 season, Cleveland Browns safety Earl Little stated to the press that he wasn’t that impressed with Lewis’ ability.

But after 295 yards and two touchdowns – including an 82-yard TD run, Little was forced to revise that opinion as a new NFL record was set, breaking Corey Dillon’s 278 by a considerable margin thanks to an 9.83 yards-per-carry average.

The closest a player has come to beating Peterson’s record came just two years after the marker was a set in a wild Week 15 game during the 2009 season.

Jerome Harrison’s performance is somewhat overshadowed by a game that featured TWO 100-plus yard kickoff returns for touchdowns by Josh Cribbs. But a game-winning touchdown, his third of the day, in the 41-34 shootout saw Harrison end the day with 286 yards. It broke the Browns’ franchise record that had been held for 52 yards by Jim Brown, who was there to congratulate him.

Most Rushing Yards in a Playoff Game

Despite having set the single-season rushing record the previous year, Eric Dickerson still felt he had a point to prove in the 1986 playoffs against a Tom Landry-led Dallas Cowboys with the legendary head coach believing the Rams had picked the former SMU running back too high in the draft.

Despite knowing that Los Angeles would be relying on Dickerson as its main offensive threat (as proven by quarterback Dieter Brock completing just 6 of 22 passes in the win), the Cowboys seemingly had no answer to the future Hall of Famer, who had rushing touchdowns of 55 and 40 yards in the 20-0 victory.

Not that it helped the Rams too much as the following week in the NFC championship game, Dickerson was held to 46 yards and fumbled twice as the Chicago Bears recorded their own 24-0 victory on their way to capturing their first NFL Championship since 1963, and maiden Super Bowl triumph.

The six cuts in Raheem Mostert’s playing career that eventually saw him land in San Francisco and destroy the Green Bay Packers’ dreams in the NFC championship game. He ran 29 times for 220 yards, recording four touchdowns in the process with 34.5% of his rushes resulting in first downs.

His 7.59 yards per carry were more than Aaron Rodgers had been able to manage in his yards-per-pass during the 2019 regular season as, once again, a second Super Bowl appearance would elude the quarterback following a 37-20 loss to the 49ers.

Rushing 40 times for 209 yards, Lamar Smith’s game-winning 17-yard touchdown (one of two on the day) came as the Dolphins’ defense held the Peyton Manning-led offense to under 200 passing yards and a solitary touchdown. It was fun while it lasted, and Miami would go on to lose 27-0 to the Oakland Raiders in the divisional round.

Most Rushing Yards in a Super Bowl

After just 29 carries during the 1987 regular season, Timmy Smith had the shock of his life when just moments before Super Bowl XXII, quarterback Doug Williams came up and told him he’d be starting ahead of the injured George Rogers.

The rookie didn’t disappoint against the Denver Broncos, enjoying his 60 minutes of fame as part of Washington’s 42-10 rout. It included a 35-point second quarter in which Smith recorded one of his two touchdowns courtesy of a 58-yard scamper. It wouldn’t be enough to be named MVP, with Williams taking the honors thanks to four touchdowns in a 340-yard passing performance.

Smith never reached these heights in the NFL again, missing the following offseason workouts and training camps following a contract dispute. He eventually returned before losing his starting job after Week 8, departing the league just two years later after a one-game spell with the Dallas Cowboys when he was replaced by a guy named Emmitt Smith.

While Timmy Smith only enjoyed a fleeting glimpse of fame, the same can’t be said for the man who’s record he broke.

Marcus Allen’s dominant performance on the ground against Washington saw him rush for 191 yards, including that memorable 74-yard effort for a touchdown on what looked like a busted play. It’s still the record for the longest rushing touchdown in Super Bowl history.

Allen was named the MVP for Super Bowl XVIII, making him the only player to have won (deep breath): the Heisman Trophy, a national championship, the Super Bowl, and been named both an NFL and Super Bowl MVP. Pity the house movers when it comes to shifting that trophy cabinet.

I know younger readers might be surprised to see Washington’s name appear so many times in a list of Super Bowl appearances, but spare a thought for John Riggins who could only watch from the sidelines in 1984 as the record he set the year previously was dismantled by Allen.

Even more galling, Riggins needed to attempt 38 carries to get to his mark of 166 yards, with most of them coming on a 43-yard TD run. Allen, meanwhile, was able to set his mark of 191 yards off just 20 carries.

Most Rushing Yards by a Quarterback in a Game

Come the NFC divisional round game, it was Colin Kaepernick who proceeded to destroy the Packers in much more convincing fashion as part of a 45-31 win. He rushed for 181 yards on 16 carries (of which two were kneel downs, which would have made his 11.31 yards per carry even more impressive) to set not only a postseason record, but also an all-time NFL record for most rushing yards by a quarterback in a game.

Not content with letting his feet do the talking, Kaepernick also threw for 263 passing yards, resulting in two touchdowns as he became just the third NFL quarterback to throw for two touchdowns and run for two in the same playoff game – joining Jay Cutler and Otto Graham, who achieved the feat twice.

It’s not surprisingly that this section is dominated by one man. And none of these include the many performances Michael Vick put up on the Madden 2004 video game when many controllers were broken in rage after trying to chase him down.

Back in the real world, his best performance came in Week 13 of the 2002 season in somewhat of a shootout against the Minnesota Vikings, who were led by a dominant Randy Moss. Vick rushed for 173 yards on 10 attempts, including the decisive 46-yard touchdown sprint in overtime in which two Vikings players ended up tackling each other as Vick slipped away for the game-winning score.

It was hardly a vintage performance for him, though. He gave up two fumbles and threw an interception on a night in which he also threw for 173 yards and accounted for 346 of Atlanta’s 379 yards in the game.

Throughout his NFL career, Lamar Jackson has found himself compared to Michael Vick at every turn, so perhaps it isn’t surprising that he has been the closest to eclipsing his regular season rushing record.

The difference between the pair could be that Lamar is a little more productive through the air as he showed in this Week 6 showdown with the Cincinnati Bengals. He had 152 yards on the ground and 236 yards in the air to become the first player in the Super Bowl era to top 200 passing yards and 150 running yards in the same regular season game.

This performance, part of his season regular season record of 1,206 rushing yards, helped him surpass Vick’s previous marker of 1,039 set in 2006.

Most Team Rushing Yards in a Game

In 1958, the greatest game ever played took place between the New York Giants and Baltimore Colts. The nationally televised contest played a significant factor in the growth of professional football as 12 future Hall of Famers went head-to-head.

Just eight years previously though, in front of 14,573 fans, the Giants set the greatest ever rushing performance by a team in the history of the NFL as they dismantled the Colts with a 423-yard game on the ground with seven different players getting their hands on the pigskin.

Eddie Price led the way with 145 yards and two scores on 17 carries as the Giants overturned a 13-point deficit with 48 unanswered points in a 55-20 victory.

Yes, it’s hard to believe that in a list of ‘positives things to have happened to a franchise,’ we are including the 2000 Cincinnati Bengals.

Coming into their Week 8 matchup against the Denver Broncos’ then second-ranked rushing defense was bad enough. Add in that the Bengals were 0-6 at this point, with their nearest margin of defeat standing at nine points AND they had already been shut out three times. Quite frankly this had the recipe for disaster.

What nobody had counted on was Corey Dillon going off for what was then an NFL record 278 rushing yards (you can double check at the top) as the Bengals passed just twice all game long, with both of those attempts coming in the first quarter of a 31-21 victory that included Peter Warrick and Brandon Bennett also finding the end zone.

In complete contrast to their matchups in the 2021 season when Joe Burrow of the Cincinnati Bengals proved himself dominant with the arm, 2020 saw the Baltimore Ravens control the ground as they secured a playoff berth.

Rookie JK Dobbins led the way in this one, rushing for 160 yards and two touchdowns on 13 carries. And seven players helped the Ravens run for 404 yards, which, realistically, could have been more if they had kept their starters in later in the 38-3 victory. 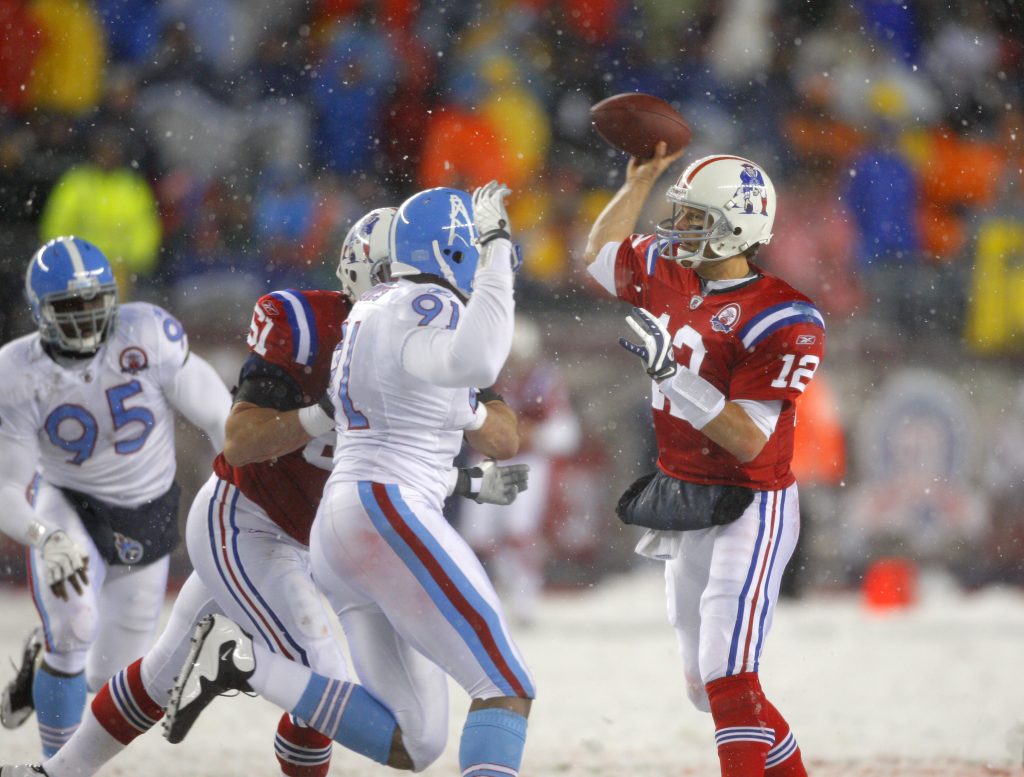 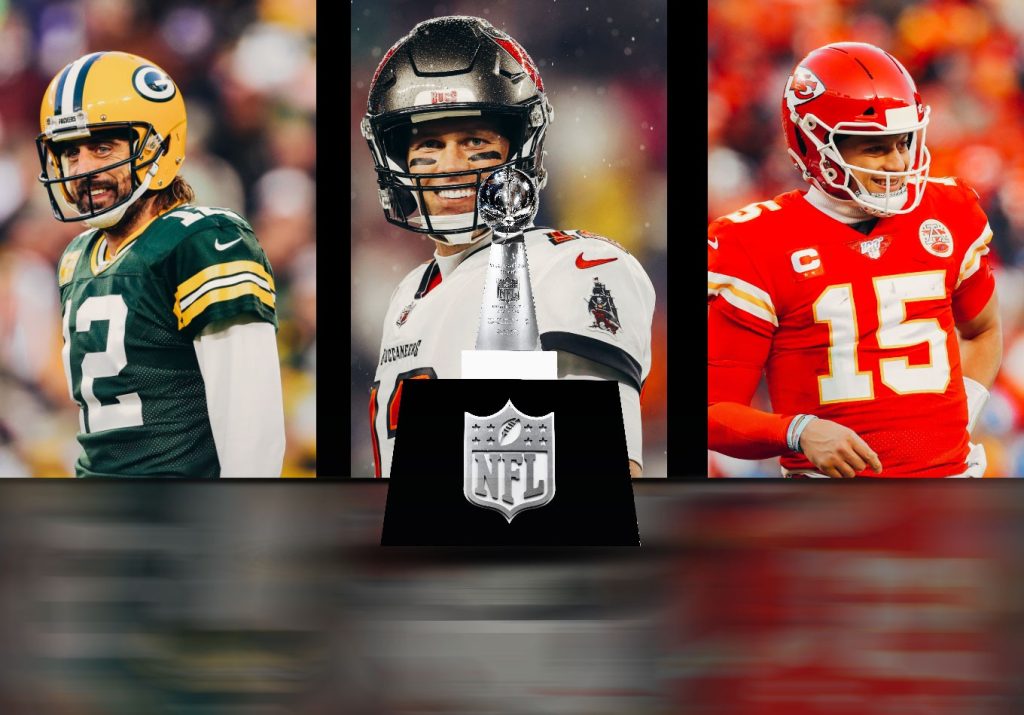 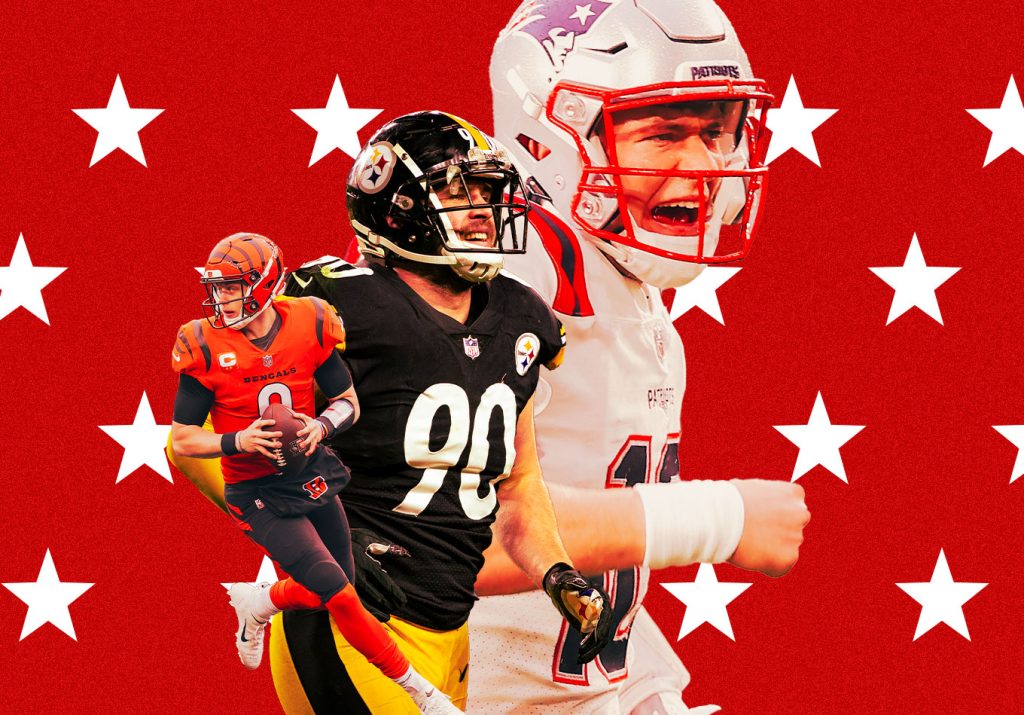